My tank turned a year old in the middle of September and I took some pics to share. Hopefully you all enjoy: 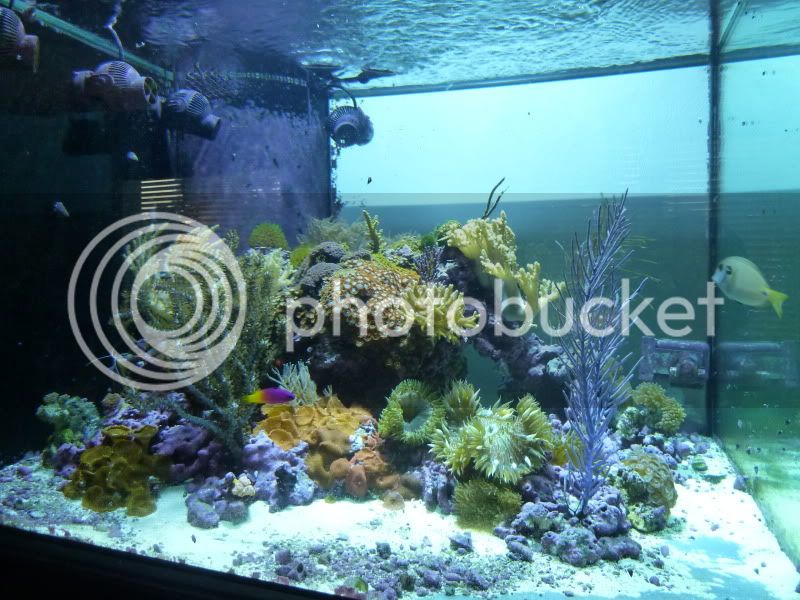 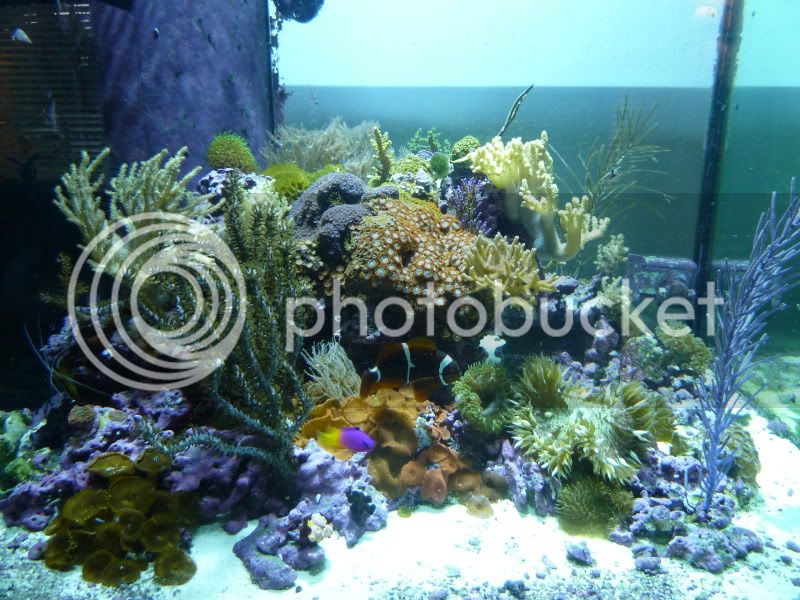 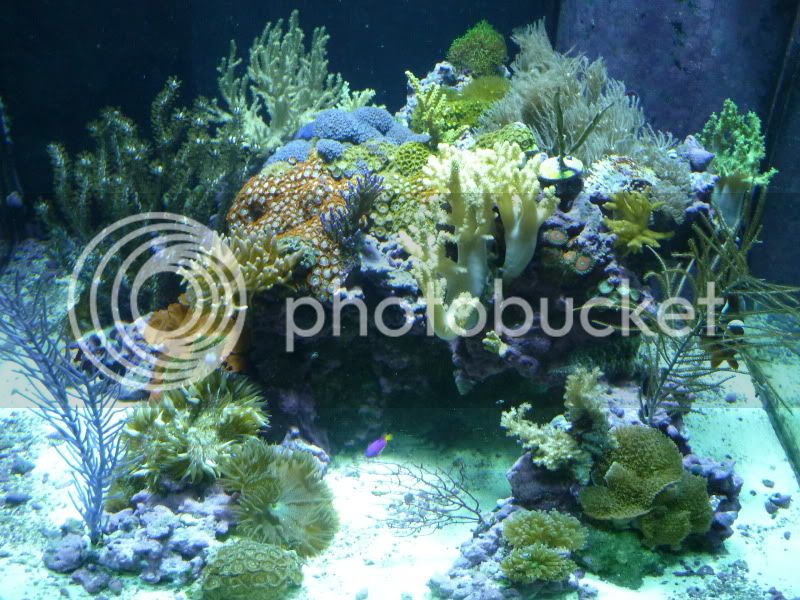 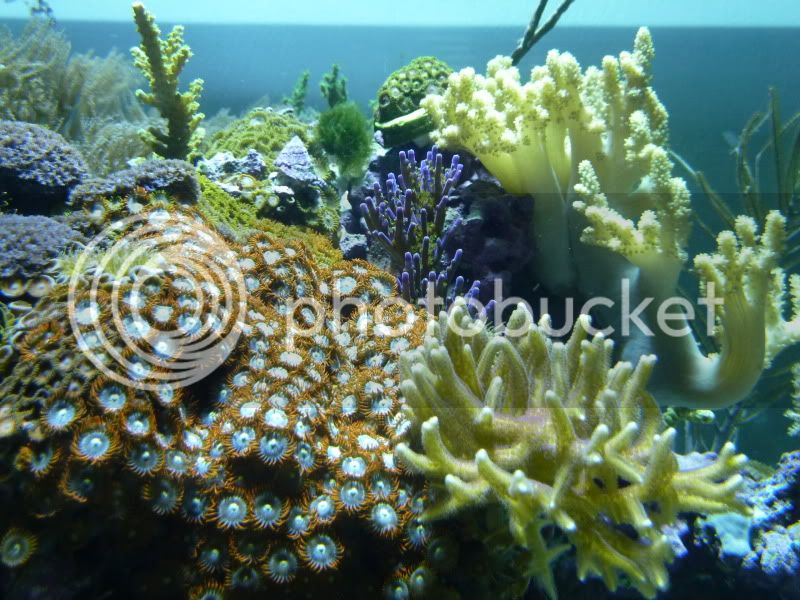 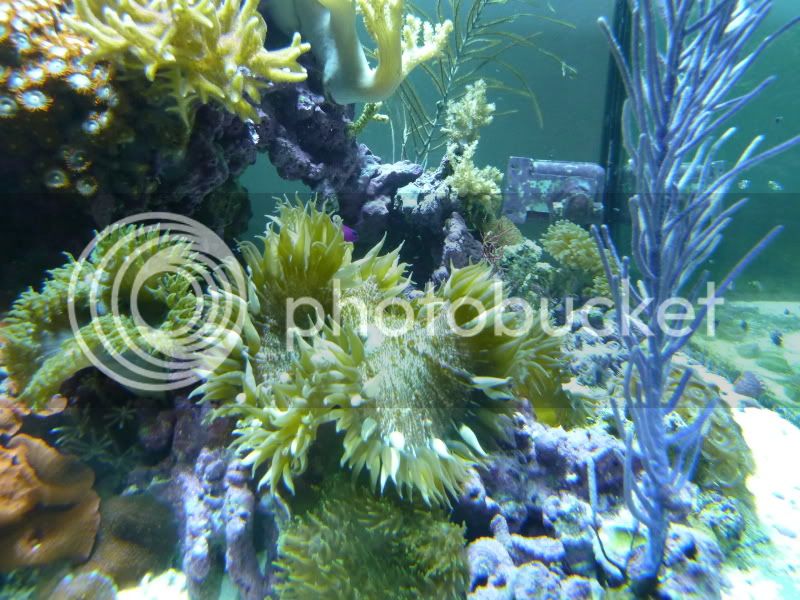 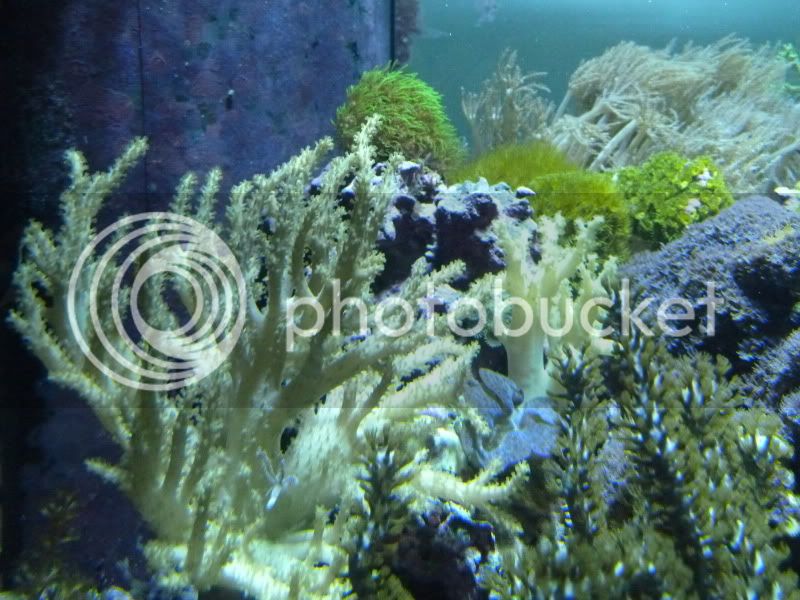 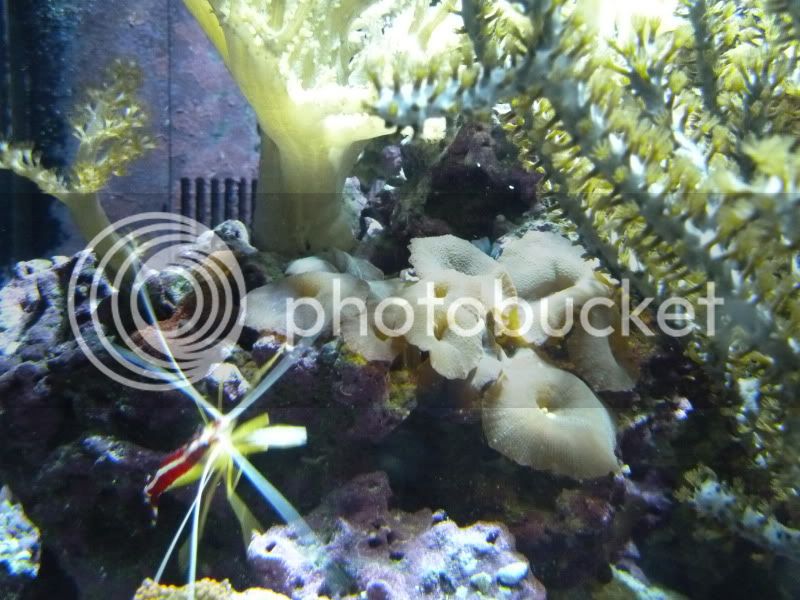 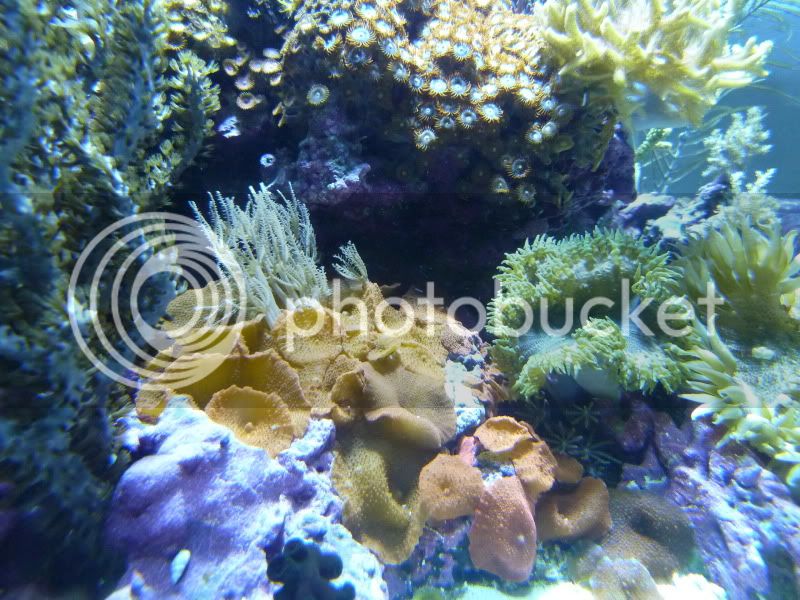 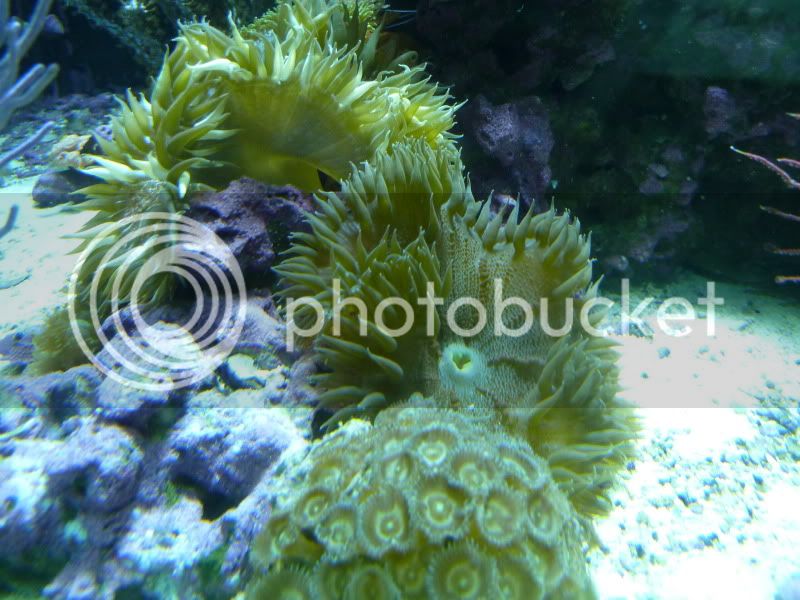 I love a good softie tank, especially with some nice mature colonies.
C

That is awesome aquascaping and corals and I love your lieutenant tang.
L

That's beautiful hope mine looks like that in a year
N

The lieutenant is the only tang along with a mated pair of maroons, a royal gramma and a king starry blenny.

I wanted to keep the scaping low to give the corals room to grow and the fish a lot of room to swim.

I try to keep this system running as simple as possible - a single 250 watt halide, a SRO1000INT skimmer, a BRS carbon reactor and I top off with kalk to keep the alk in check.
C

i wanna see more of this tank
C

Looks like a lot of flow... which Tunze's are those?

Thanks everyone for the kind comments. I can post up some pics showing the progression of things and I'll give you guys a run down as to what's involved.

The tank is a 150 gallon Marineland Deep Dimension with Starphire glass and the standard Monterrey stand. It came with the canopy, but I absolutely hate canopies and gave it away.

Lighting is a single, single ended 250 watt Coralvue 14K metal halide with a Lumenmax Elite reflector. I made the support arm from some standard conduit and just bent it up, made a match plate to mount the reflector and painted the entire thing flat black. The ballast is an old school Blue Wave pulse start ballast.

The sump is a standard Sea Life Systems acrylic sump. It holds maybe 20 gallons or so, not too sure. I modified the baffles to allow for the skimmer height. Skimmer is a Super Reef Octopus SRO1000INT rated for 150 gallons. The return is a Mag 12 and I'm running a BRS dual reactor filled only with carbon. I have an ATO with a standard glass 10 gallon tank beneath the stand as well filled with Kalk. I have a small pump in the reservoir that I plug in for a minute or 2 each day to agitate the Kalk. Inside the sump, I actually do what most don't - I've packed the main drain area with sponges to keep noise down, to culture bacteria and catch some misc things. I never rinse them.

There's only about 80 lbs of rock that was all dead base rock when I started it. I seeded it only with a few pieces of live rock and from what rock corals and other frags were attached to.

I feed heavily, almost to disgusting levels for some folks... I feed Microcrabs 2 to 3 times a day, and nori once a day. Twice a week, I feed a homemade blend that I get from the LFS (more for the corals) and mix it with frozen PE mysis. I culture my own baby brine shrimp and feed that every 2 days as well. Once a week, I feed Coral Frenzy at night. I think feeding the tank is one of my favorite things.

Fish list is a mated pair of maroon clowns that lay eggs religiously, a lieutenant tang, a royal gramma and a king starry blenny. I have various inverts including a pair of cleaner shrimp, a fire shrimp, a large serpent star, a sally lightfoot, various blue leg hermits, astrea snails and a self sustaining population of cerith snails.

Corals are mostly softies, but I have a few SPS corals too - a green slimer, purple bonsai, and 2 different types of birdsnest corals and I keep a blue maxima clam. I'm holding a couple of LPS corals for a friend temporarily as well.

Enough of my ramblings - here's some more pics. The pics at the beginning of the trhead are the most recent. These are pretty much progression shots over the past year: 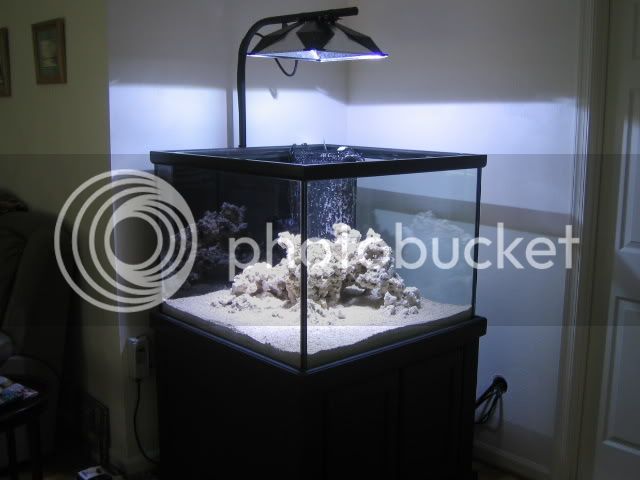 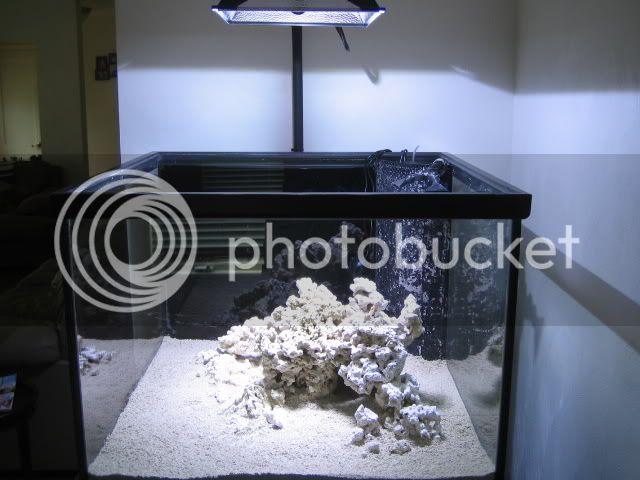 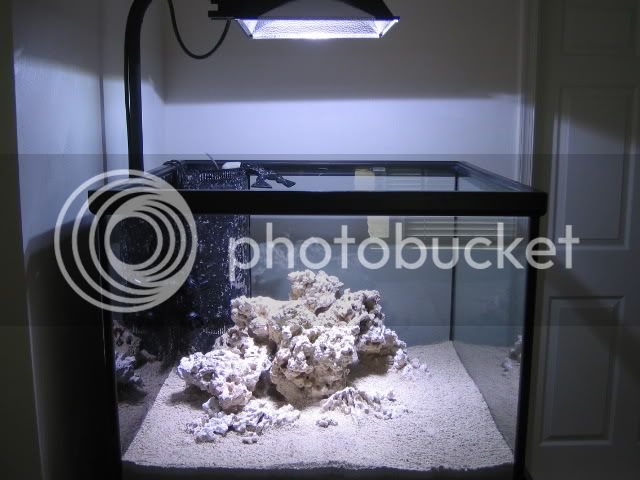 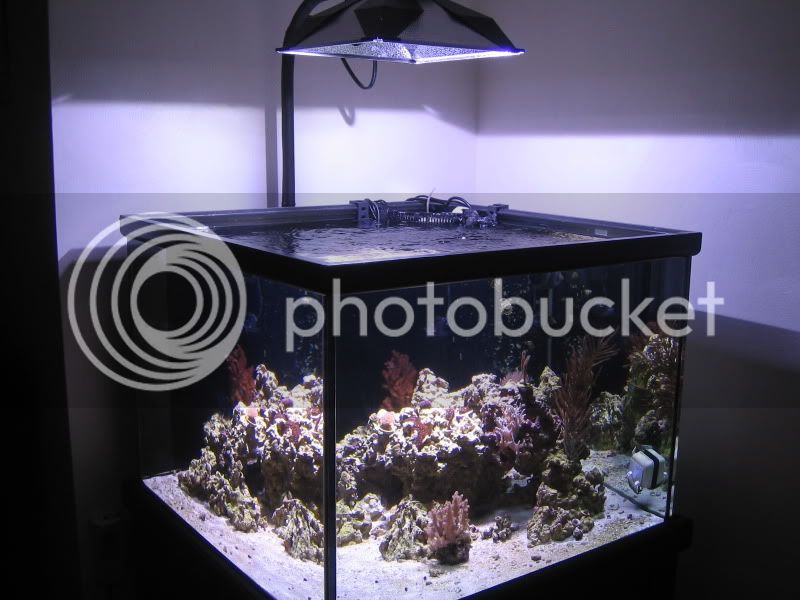 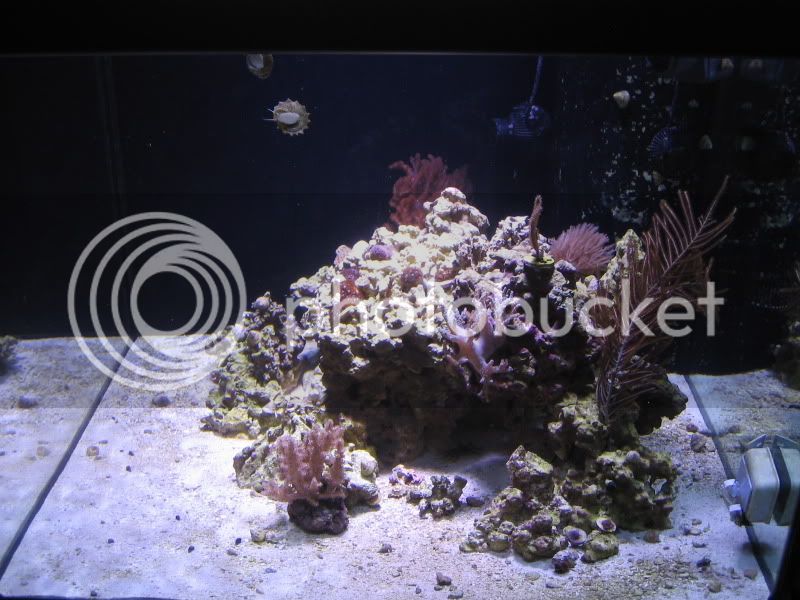 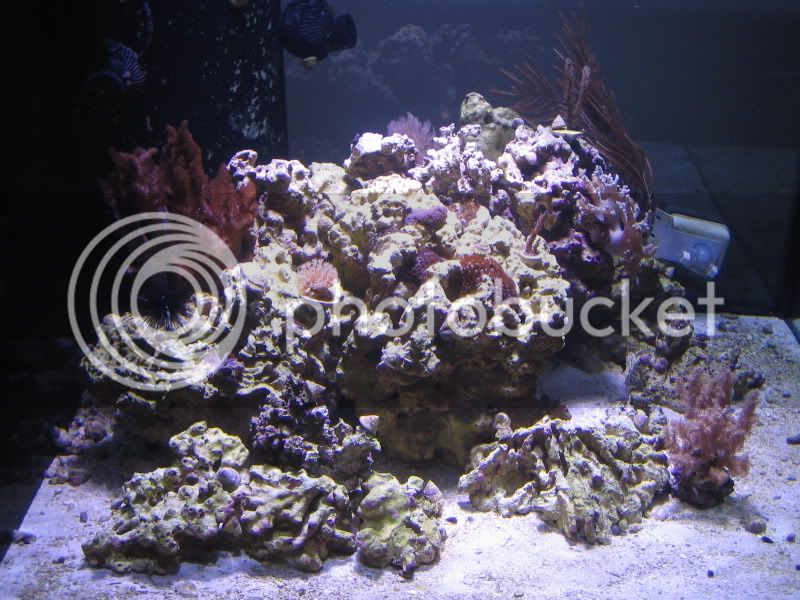 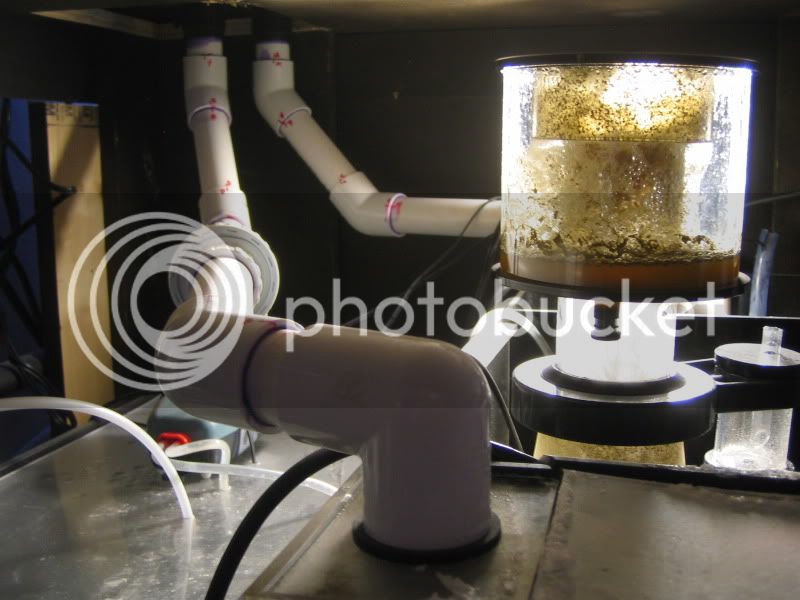 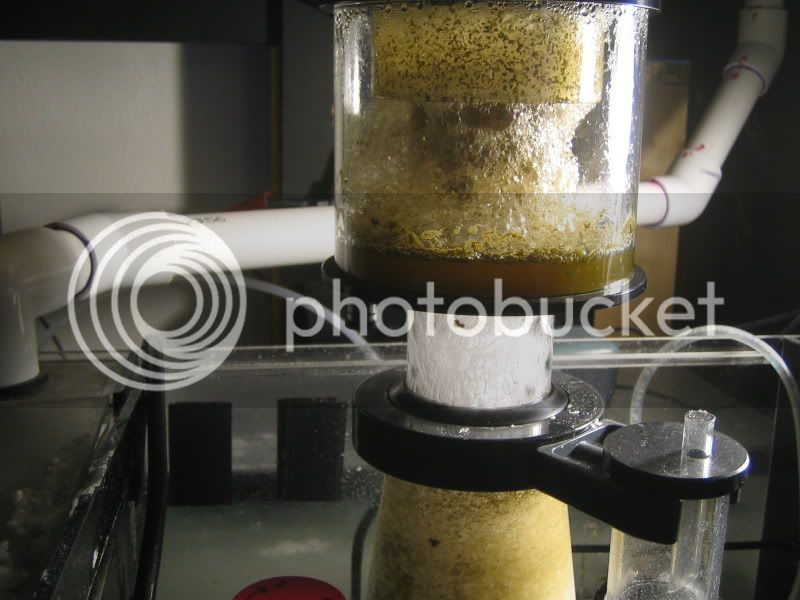 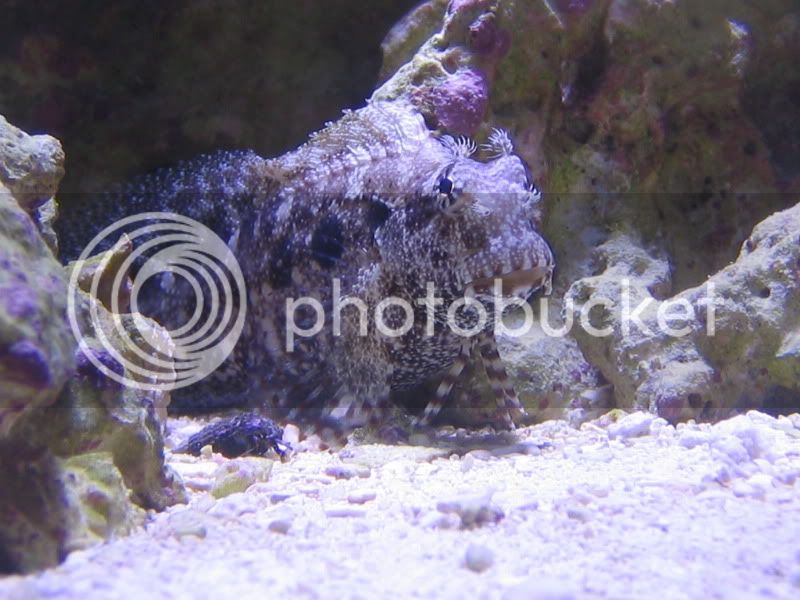 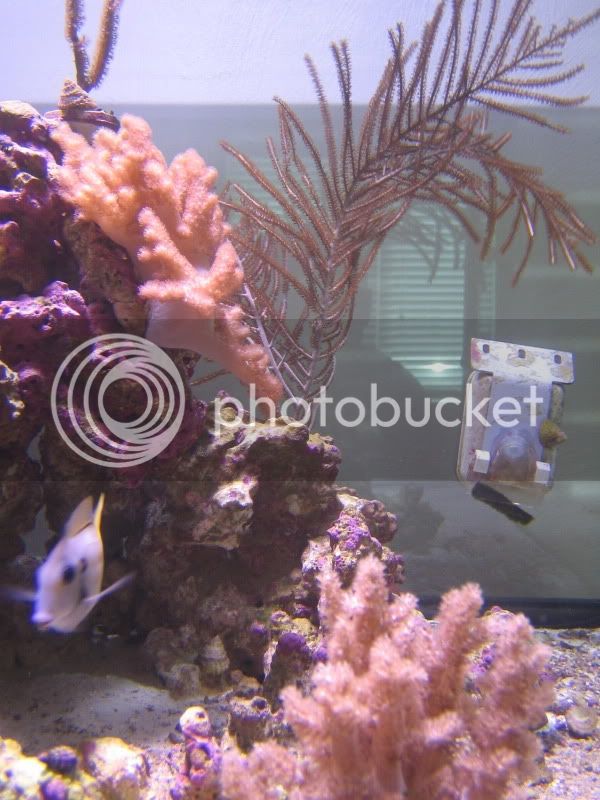 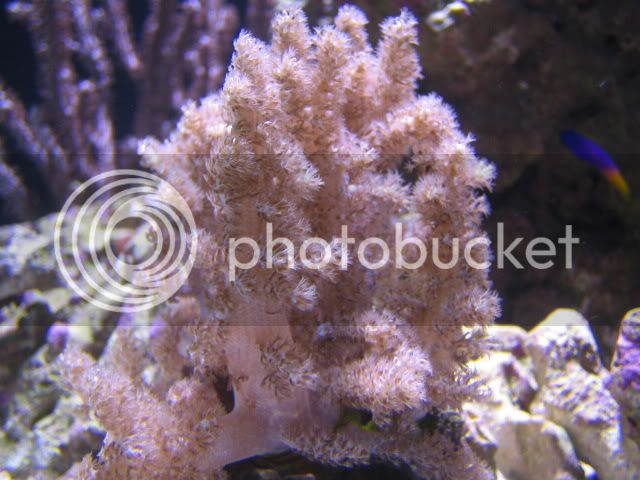 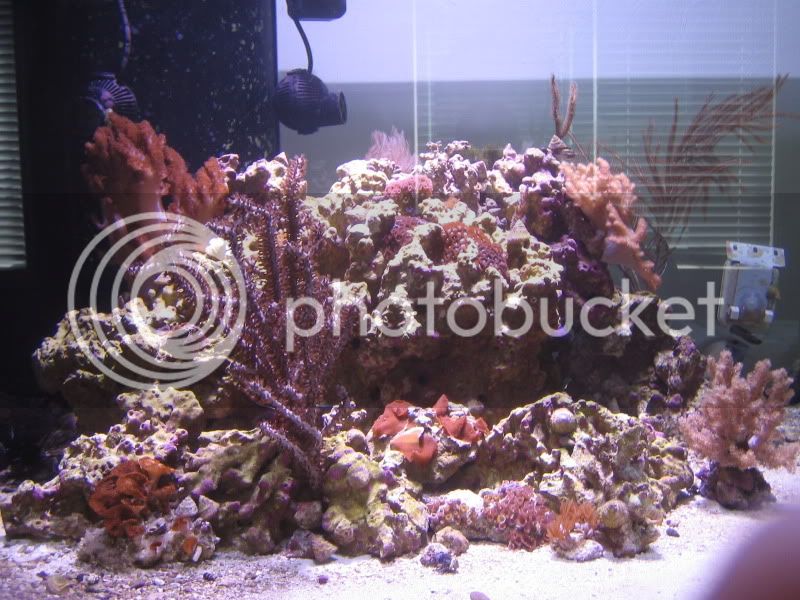 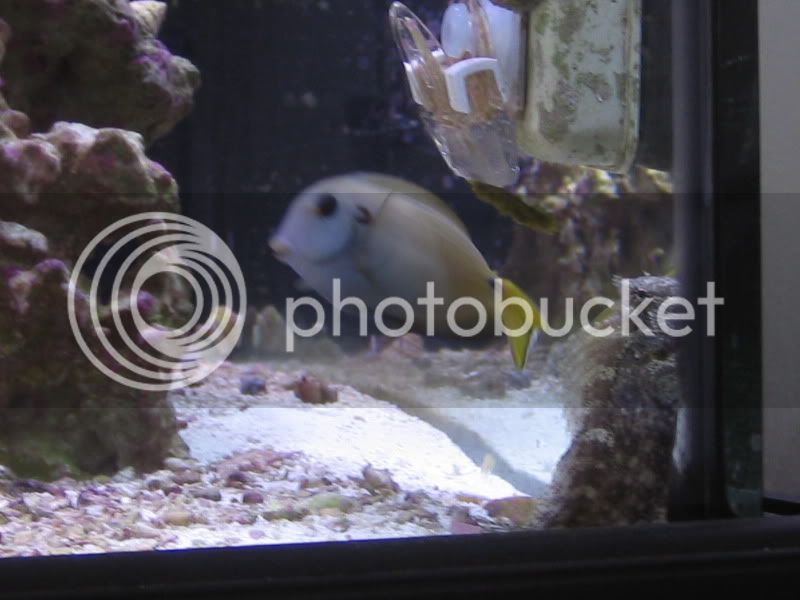 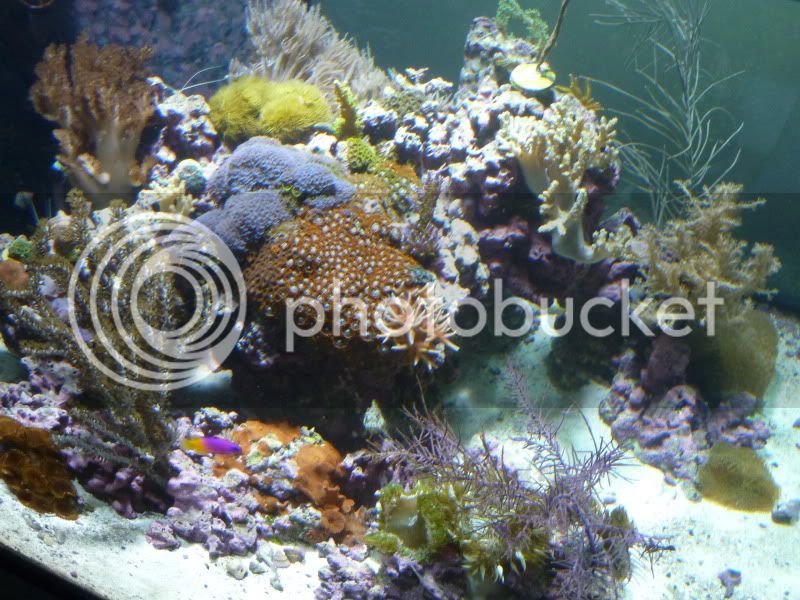 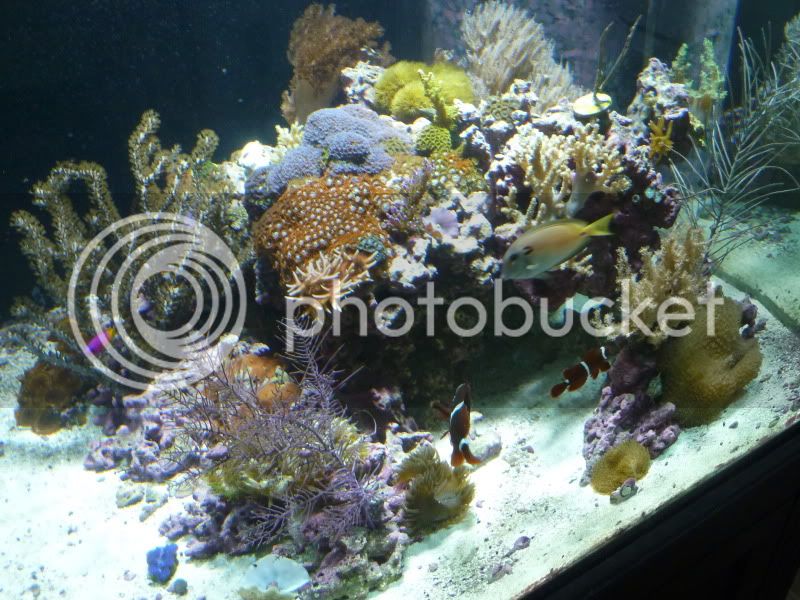 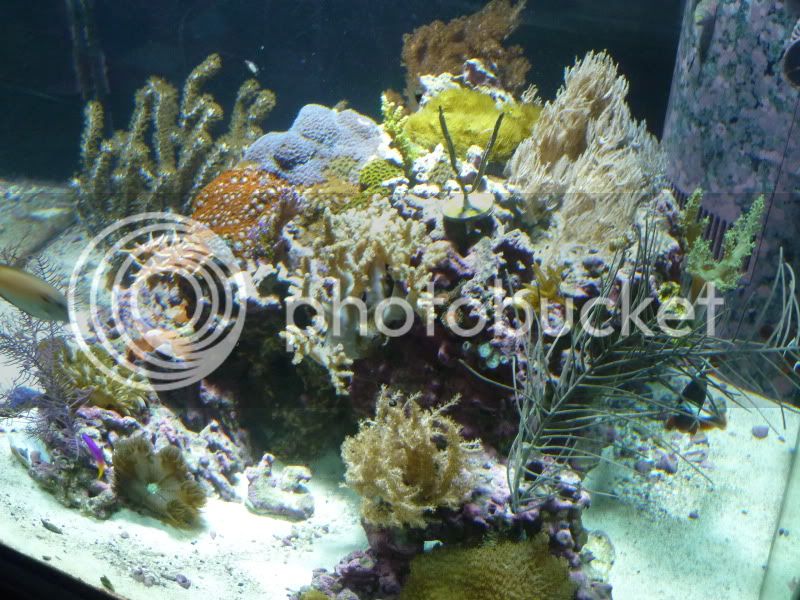 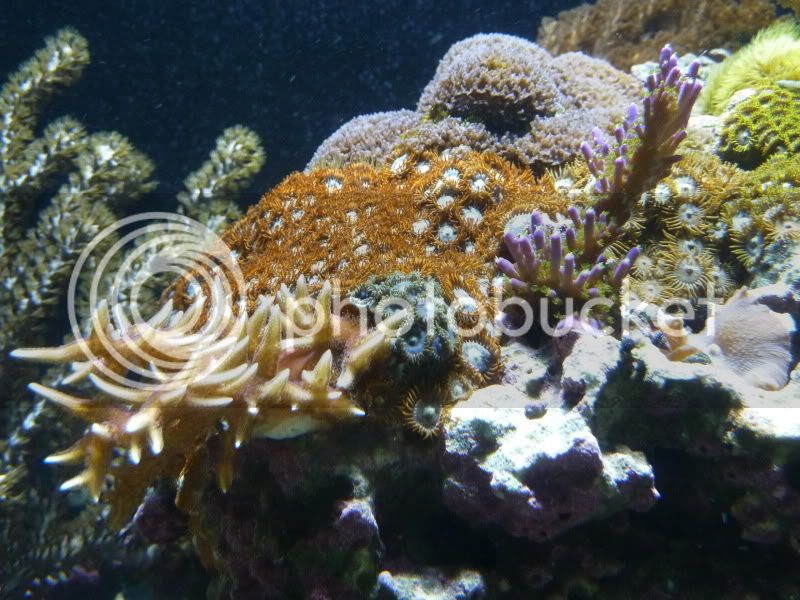 That is a awesome tank it has come a long way in a year.

Lovely i also have a softie tank, 130G but yours is much nicer.
What do you do for nutrient export besides the skimmer?
I noticed you not running any phosphate remover how do u manage to keep algae at bay?

I don't really do a whole lot for nutrient export. My original plan was to have a DSB in the display (you can see how deep the sand was in the first few set-up pics), but that started causing issues for me right off the bat. It was live sand that I killed off and allowed to dry out then I started out with a huge bryopsis and dino outbreak that lasted around 3 months. It almost made me tear the system down and completely start over. I would say the combination of a longspine urchin (that I no longer have) and a dolabella sp. sea hare, they took care of the bryopsis (I don't have the sea hare anymore either). I sucked out most of the sand in my battle with the dinos and I would say it's maybe an inch thick in certain areas only now but most of it only barely covers the bottom. Now the sand bed is completely packed with spaghetti worms.

I used to run PO4 removers back in the day, but I just stopped using them. I don't really have a reason behind it, I guess it's just one of things that I just forgot about doing.

I run my skimmer as wet as it can go and coupled with the fact that I have it sitting in 8" of water, it works hard and pulls a nice brown skimmate. I only change out the carbon maybe once every month or 2 and I only do water changes (20 gallons) about as often.

There is no fuge either and there are quite a few sponges growing all throughout the sump. I'm sure that does help some, but not that much. There is very minimal live rock in the sump - maybe a pound or 2 and it has the things on it that I don't want in the display like those web spinning hard tubed snails (I can't remember their name). I think all of the sponge blocks I have in the sump are taking the load for the small amount of rock in the system. They're packed with pods and worms.

The only patch of algae I have is seen in the pics at the top - a small patch of bryopsis that grows to about the size of a golf ball before I pull it out.

My nitrates and phosphates both read zero, but it could be taken in by other things that may be giving me a false reading, but I doubt it.
Z

i also figured that my fish load is about 250% that of yours as i have a yellow,sailfin,naso, blue throat, flame angel, anthias*4 and pair clowns, would love to have a system like yours very very simple and easy to keep but alas the Wife loves her fish and i can only afford 1 reef tank

That's pretty funny. I actually would like to keep more fish but I've always been cursed with being able to only keep a few. I'm jealous of the folks that can keep a lot of fish, but for some reason I just can't. That's OK though, I've come to terms with it.

im setting up a 220 softy/lps tank and i hope it looks as good as yours one day. i love the fact your set up is so simple!!!
i love simple
corey

Thanks! Simple's my style. Some folks like all the gadgets and controllers and stuff. The only real controller I have is a Ranco that I use for my heaters. In fact, in all the years I've been doing this, I've had around 8 different systems (some going on at the same time) and this is only the 2nd system with a sump. This is the first system with an auto-top-off...

I truly think that the more gadgets there are, the more likely something is to fail and I'd rather enjoy my system than tinker with this or fool with that.

One piece of advice I'd like to give out though - is really look to see what's compatible - coral wise. SPS systems, softies, LPS, etc. They come from totally different areas of the reef and need to be treated as such. Sometimes they overlap, but not very often. Chemical warfare between corals is a PITA.

if you dont mind me asking where did you get the seafans and gorgarians?? i can never mind nice colonies like that
You must log in or register to reply here.