Here's some brief background: I have had my hands in water for quite awhile and have made a few journeys into the salt hobby. Now that I have no freshwater tanks, I am dedicating myself to something I have half-heartedly tried once or twice in the past.

I am using a tank that was a LR invert tank in my daughters school homeroom more than a year ago. It was moved to my daughters room and eventually not taken care of. The tank didn't get feed and the light timer failed, so it has been sitting relatively dark for months with no feeding. Skimmer still running with one PH. I moved it a couple of week ago to the livingroom and took the LR out, stirred the sand and topped with about 10 more lbs of LS from a local tank, making over 4". Put the rock back in and added a few lbs of new LR. put a couple of old rio PH in for movement. No cycle. Currently it has the skimmer running and 96Wquad lighting.

I have ordered a mix-and-match special from IPSF, which will arrive Friday to really activate the DSB. That is quite a few critters for a 10g. tank footprint. And I should have few loses because I currently have no inverts and no fish. I will start testing in earnest for Ca, Alk and Mag soon, but will wait awhile before any corals or fish (1 or 2 at most) go in.

I also have a Currant 150W HQI SunPod ordered, as well as a timer and 2 Korelia #1 PH. They should be here in a few days. I am assuming, at this point, that I can start immediately with the desired photoperiod on the halide, as there will be nothing to burn.

That's it for now, but the future plan is to add a sump/fuge and have a dosing system and top-off. I will, hopefully, regularly post pics(as soon as I get some) and progress here.

nice start, the halide was a good choice! I love seeing little tanks w/halides. what kinda coral are you planning on keeping?

Thanks, Flavum. The Sunpod comes with a 14K lamp. I hear some complain about the stock lamp, expecially the model that come with a 10K. They say it is too yellow. No actinics worries me a touch, but hopefully the 14K will have more blue and last for awhile before I want to change it out...I have too many other things on this project I need to buy first.

I am planning on an SPS tank. Might be wishful thinking, but I am going for it.

Here is the initial set-up of the tank. I have quite a bit of LR, mostly in a gradual rock face to the back. I placed base rock supports to the floor when I stirred the sand and added the new LS. It looks crowded, but there is a fair amount of open area in between the entire rock stucture. I have been modifying this structure for the past several days and I am sure that it will see more movement before all is said and done.

OK, I am obviously not getting this picture upload thing real well. I will look at it more when I have time later. For those interested, I have put it in my Gallery.

I guess that if I read the instructions on posting images, I would have more success.

Thanks Mavvy. I am sure that I will be posting as many problems as I will thing that seem to work OK. That is kind of why I am doing this thread...hopefully to learn more for my next reef.

I got the detritivour shipment from IPSF yesterday afternoon. Everything was pretty good, but there were a few minor glitches. The box was pretty cold, as it was a 2 day trip from Hawaii. Water in the bags that had water was very cold, so I took a little longer to acclimate. The box that it came in was packed very well (with 3 heat packs with the heatpack packages cut open on one end. I assume this was to heat the small box, but not increase the temp too much when in a warm part of the trip (like the Hawaiin FedX depot The legnth of the trip and the limited heat from these packs produced some cold contents by the time it arrived. Nothing that I could obviously see was dead though.

After acclimation, I emptied contents into the tank per their instructions. This was a very large janatorial crew for the size tank that their in and I am not quite sure whether that is good or bad, but it is pretty cool. The tank is teaming with life now. On top of all the large items, there is a bunch of microfauna that is really neat. I had a magnifying glass out looking at some of the criter on the glass and near the front of the tank. Most of these came from the Live sand activator and wondermud.

I want to not that the LSActivator was gravel sized and, because of the size of the tank, covered the sand bed with a thin layer of larger material. Their instructions were to mix it in with your sand bed, but things were already so stirred up from the wondermud and so many little critters were all over that gravel that I thought that I would wait until today to stir it in. I am tempted to remove some of it. I don't really like that much large-sized material in top of the DSB and I don't really think that I need any more nitrifying bacteria.

A few final thoughts. The wondermud is MUD. It produces quite a cloud, no matter how careful you are. But it was really worth it to me because I got some of the worms that I didn't order in it, as well as an apperant huge diversity of micro organisms. The other thing is that I think it would be quit difficult to add all the contents of this pack into a seasoned tank with inverts and fish. The idea would be to do it during a dark period in the tank but then it would be tough to see what your doing (ie, getting the last bit of material out of the pod bag, emptying the mud carefully onto the sandbed, etc.

Here is what I ordered:

microhermits
trocus grazers
nerite grazer
stombus grazers
baby bristle worms
pods
LS activator
wondermud
sandbed clams
+I am trying the coralline algea booster, because alot of the rock has little from all the time without light.

OVERALL I give this mix-and-match package a thumbs up! I think that all thiese criters are extremely cool to look at, as well as their utility in the tank. They are definitely part of the show. Any comments on this pack and its application in such a small tank (albeit with a DSB) will be much appreciated.

I have the same HQI light fixture for my cube tank. Excellent.
As for the micro pack.. seems decent. I'm just wondering what the "LS Activator" really is.. think of it this way though.. if you decide on a smaller jaw fish for your 1 fish purchase, it will have tons of burrow-making material. Just make sure you have enough circulation so that the large 'gravel size' doesn't attract too much detritus.

I think that the LS Activator is basically a bag of larger gained substrate with denitrifying bacteria, worms and some snails...basically a starter seed for a sand bed.

"think of it this way though.. if you decide on a smaller jaw fish for your 1 fish purchase, it will have tons of burrow-making material. Just make sure you have enough circulation so that the large 'gravel size' doesn't attract too much detritus."

I don't think that most of that larger stuff will be staying in there. If the footpring were larger, no problem, but some has got to go. I doubt the a sand-sifting fish will be my choice. They are interesting, but I am hoping that the DSB maint. will be done by the detritivores instead of something that can spit sand over SPS frags that might be sitting on the sand. But I really don't know too much about Jawfish

I might opt for something like a Psuedochromis, maybe a springeri or even a pair, but that is something I haven't really researched yet. Who knows what will happen when I get to that point.

It has been about a month and all is going pretty well so far. I built a DIY sump out of a rimless 8g. glass tank and had a glass comp. cut baffles and return pump shelf. It was pretty easy wiuth all the research info I had from here and it only cost about $50. 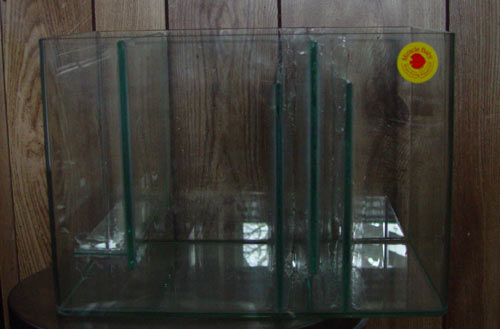 I was lucky enough to find the correct proportions to fit into my cabinet while allowing just enough room for the Bakpak skimmer. This is a small sump/fuge, but it has worked out pretty well for me. I have been able to fit everything in it that I needed to wiithout sacrificing my ability to get to things. Here is the sump after several weeks in use. 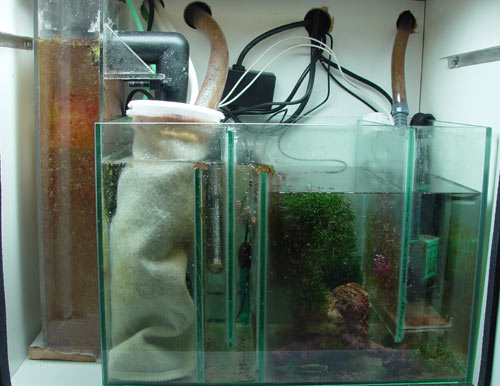 From left to right is the skimmer, inlet chamber from overflow with filter sock, baffles, fuge, return shelf pump. The first section houses the 3/4" overflow tube, skimmer pump and return, the GFO/Carbon reactor pump and return and ATO return tube. The baffles (2 X 1") house the heater, temp and pH probes. The (currently) BB fuge has LR and cheato. Finally, the return area holds the return pump and the ATO sensor. The sump runs at about 100 to 125g./hour.

The final step to the sump area will be to get dosing pumps, but the tank is so small that it is no biggy to deal with 2-part dosing manually for now...especially since most everything else is automated with a Reefkeeper II controller.

I actually am no longer using that sump for the set-up. I built another (basically identical) sump out of a 10g. There is just a little more room for all the junk I was trying to fit in there. That sump has been running for more than a month and seems to be doing pretty well, as I am pulling a large amount of chaeto out every week and growing a ton of pods.

The other sump is now a QT tank and is being put to good use right now for my fight with Monti eating nudibranchs. Read more here-
http://reefcentral.com/forums/showthread.php?s=&threadid=1620744

i saw the monti nudis first hand (not my tank) but its a battle that can be won. best of luck
You must log in or register to reply here.