Hello, have a problem with a four year old AGA Mission series stand on my AGA 210, falling apart..doesn't like water. Made of some sort of compressed cardboard......I'm going to replace the stand " with a wood one " Have a few small scratches on the tank so I'm looking for a new one.. Question I have is the Starfire glass worth it, some say the glass is softer, I just don't know...Any recommendations.

steelhant said:
Question I have is the Starfire glass worth it, some say the glass is softer
Click to expand...

worth it- YES!
Softer- yes

I got my first starphire tank a few weeks back and it makes me want to replace my two other standard glass tanks. It's like comparing a HD tv to standard def. Standard def is fine until you put it next to HD, same applies here. The glass is softer and will scratch- be careful with LR placement, don't use a mag float and you will have nothing to worry about.

Per the manufacturer PPG, starphire or low iron has generally the same hardness as regular glass. People hear "low iron" and they instantly think it is softer. One wacko on a post claimed he could scratch starphire like acrylic with his fingernail but unless he is wolverine, he is full of crap. It is not easy to scratch but can happen just like it can with regular glass.

While I have a tank with starphire, I was able to view a tank at a local store that has a side pane of glass in 1/2" starphire and a front pane in regular 1/2", no idea why they did this but they did. The cool part is that at angle, I could look side by side and compare the two. My observations were as follows...

- Starphire side seemed a very small amount brighter
- Regular glass was just every so slightly darker, and looked like a little contrast was added such as if you were using photoshop to add a tad of contrast which was not a bad thing in any way.
- Both showed coral equally in detail and clarity
- Colors looked equally good with both

So in short, I liked the look of both. Regular glass ruined nothing for me viewing pleasure wise but in general your tank will have a higher re-sale value if you ever take it down if low iron or starphire is used.

Also be wary of expensive tanks that claim to use actual PPG starphire. Look at the edges of the glass and if they are not light blue or vivid blue in color (depends on length of glass), they may just be using regular low iron glass which is fine, but it is not actual starphire from ppg.

For example, you can see the edge of this tank which in fact uses PPG starphire. Anything else will look light green or dark green that I have found. 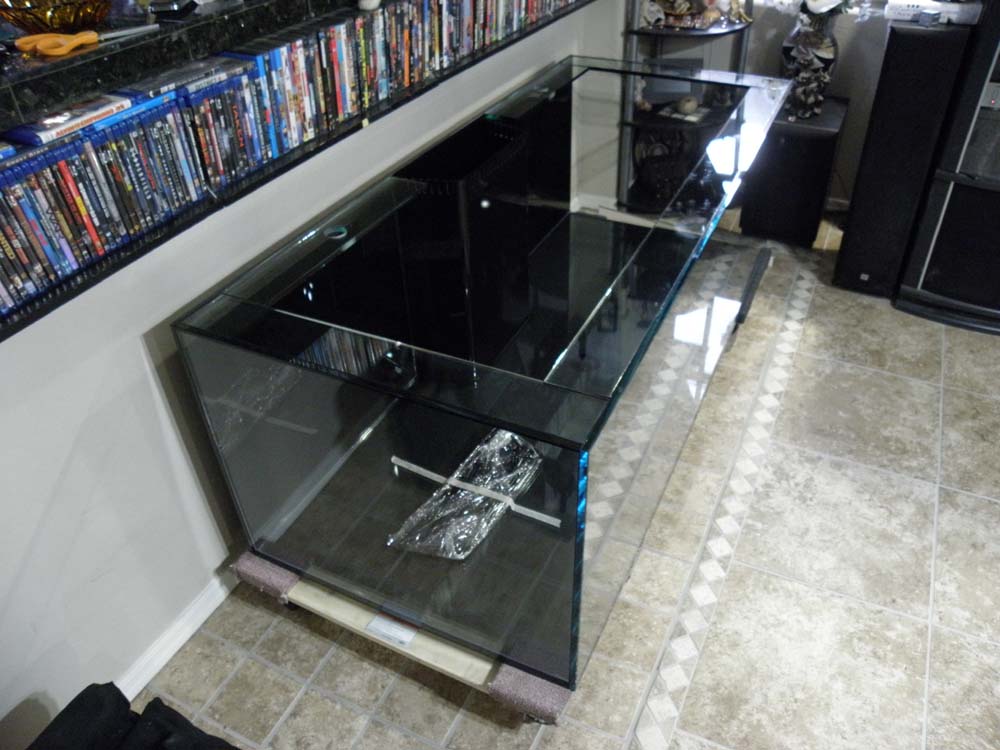 Thanks for the responses..."Garage1217" curious where you purchased the tank showing..looks mint

That tank was built by Lee-Mar and purchased locally. Lee-Mar only sells through authorized dealers so you have to jump through hoops to find one.

When I bought my tank, I had the same questions so I ended up buying starphire because I didn't want to ask myself.... what if I bought a starphire tank, would it be clearer?

i haven't noticed it being any softer than regular glass but the clarity is amazing.
Below you can see the difference, i placed 2 pieces of identical foam behind starfire and normal glass. Good image! Big difference for sure. With things illuminated inside the tank, looking through the glass, I just did not see a huge difference. I will try to take a photo next time I am down at the LFS that has the tank with the front in regular and side (the side faces the entrance to the store) in starphire.

Garage1217 said:
Good image! Big difference for sure. With things illuminated inside the tank, looking through the glass, I just did not see a huge difference. I will try to take a photo next time I am down at the LFS that has the tank with the front in regular and side (the side faces the entrance to the store) in starphire.
Click to expand...

You will notice a difference in the pictures. I have my custom original oceanic tank since 2002? I use a kent SS scraper every other day, no scratches. There is at least one high dollar manufacture out there that uses a low iron glass that scratches very easy, so there might be more? I have seen another that advertises low iron, but it is not Starfire.

its so much more clear, I kind of dont like it .... clear water .. and it looks like your fish are flying ...
You must log in or register to reply here.