I have a pretty pink acro that hosts two acro crabs. I've never noticed them misbehaving at all, although admittedly it is possible they've been munching on him unbeknownst to me: 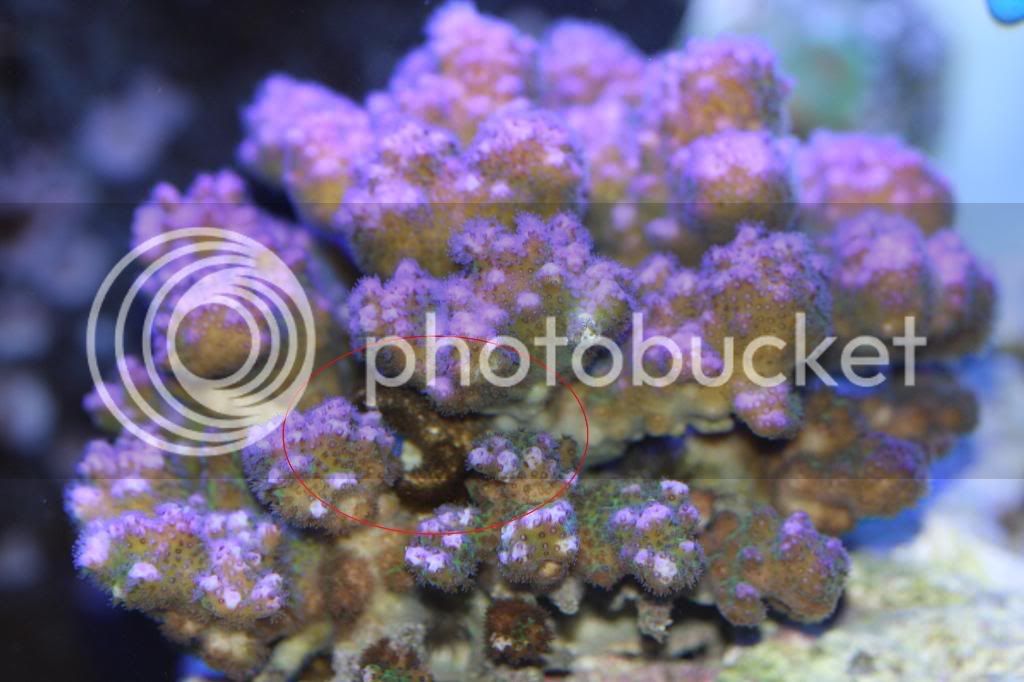 That's one of them, although he's a bit tough to see. Anyway, about 3 inches away from the pink acro is a yellow montipora capricornus. Yesterday I saw that one of the acro crabs had moved to the cap. I was kind of psyched that the cap had grown enough to have folds capable of hosting the acro crab. Well, I was psyched until I saw that the crab was tearing apart that section of the cap: 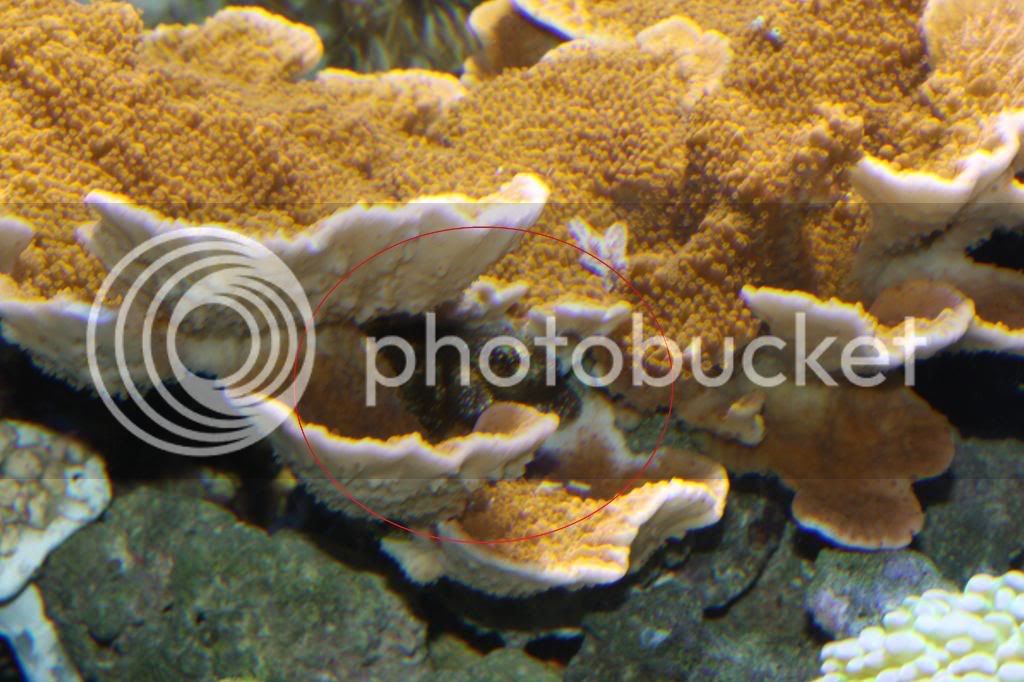 You can see just to the right of the crab and still inside the red circle where the crab has been tearing down part of the cap. I tried to dig him out but he anchored himself in between two of the cap folds and I couldn't budge him. Later at night he moved back to the acro and has been behaving since then. I figured on a couple of possibilities:

1) I have a bad crab that's been tearing stuff apart and I just never noticed before. I kind of doubt this is the case.
2) The acro crab's are OK in acros, but they attack other corals - especially if they start to encroach on the acro they are protecting. I know there are ants that have symbiotic relationships with the trees they live in which will tear apart any plants that touch the plant they are living in. Could this be a similar case?
3) The crab was making his home and was only tearing apart part of the coral in an effort to make a better space for himself.

What do you think?
G

The general consensus is that the hairy crabs are the bad ones and are generally banished to the sumps.

He is certainly hairy. Is it common for crabs to be model citizens in their host coral, but then they go out and attack their neighbors?

I would get them out .. not good acro crabs

That is not an acro crab and nor is the coral it's hosting an acropora. The coral is a poccilopora. I would defnitely remove the crabs as if they're hairy, then they're bad.

<a href=showthread.php?s=&postid=12844612#post12844612 target=_blank>Originally posted</a> by myzislow
That is not an acro crab and nor is the coral it's hosting an acropora. The coral is a poccilopora. I would defnitely remove the crabs as if they're hairy, then they're bad.
Click to expand...

There are acro crabs that do host in poccilopora..but that is not pne of them

I've had him in there for the past 6 months or so that I've owned the tank. I've never seen them harm anything before. Are they like certain types of fish that may or may not eat corals or are they pretty universally bad?
Thanks for all the help here. I'm just scratching my head on this one.

just a rule of thumb

smooth. colored white, red or other, have a black stripe on the face = good

Not a good guy. I'd remove him even if I didn't see damage.

Los, the advice has been given here, and again, I am going to reiterate that this is NOT a good crab and it needs to go. And personally when I look at the pic of the poccilopora, the bases of the branches are bleached there are no polyps as far as I can see.

We have given you the best advice we can, if you wanna keep them there, so be it, but it almost certainly won't have a happy ending...

Got it. Thanks for the advice.

I've been reading up on how to get these guys out of there and it seems the best bet is to put some shrimp or other tasty treat in a jar and wait for him to jump in.

<a href=showthread.php?s=&postid=12845580#post12845580 target=_blank>Originally posted</a> by reefman13
Los, the advice has been given here, and again, I am going to reiterate that this is NOT a good crab and it needs to go. And personally when I look at the pic of the poccilopora, the bases of the branches are bleached there are no polyps as far as I can see.

To be fair, I used to have a very large pocillapora colony, and the inside was always white like that. Only the outside branches had color or polyps for that matter on them. I imagine it was because it was so bushy that not much of my meager flow could get into the colony, but I KNOW it wasn't a crab or other creature living inside.

But yeah, bad crap, get it out.

I've also heard that you can use one of those double or triple shot glasses and drop a few shrimp in it and lean it up against the coral or rocks or whatever overnight. It's the same principle, but maybe easier to maneuver the shotglass?

OK, I got the two crabs out. There was a male and a female and it was not easy. I fought them out with some 10" tweezers (best tool I own, btw). Here are some pics, including a close up of a claw, which came off during the battle. 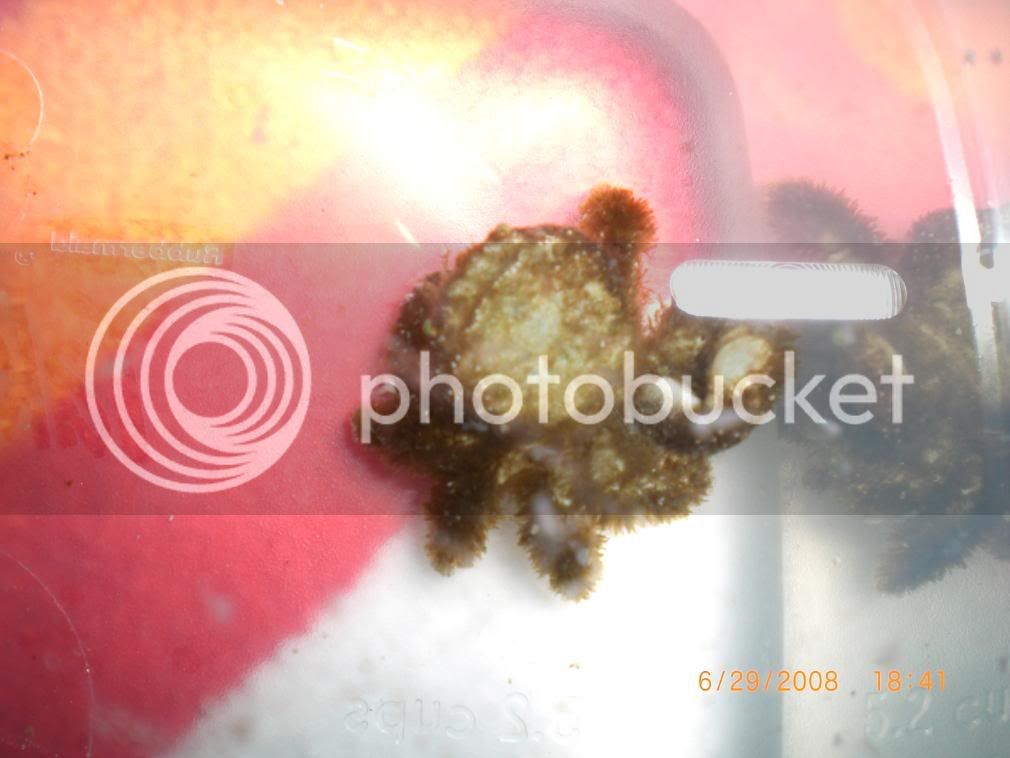 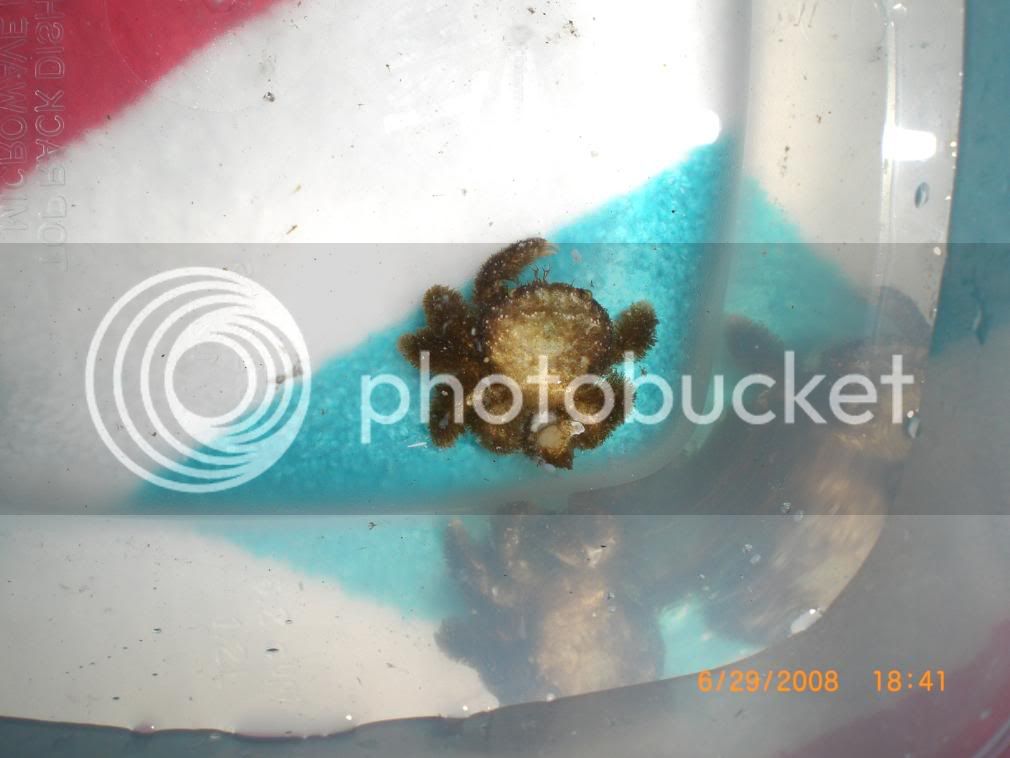 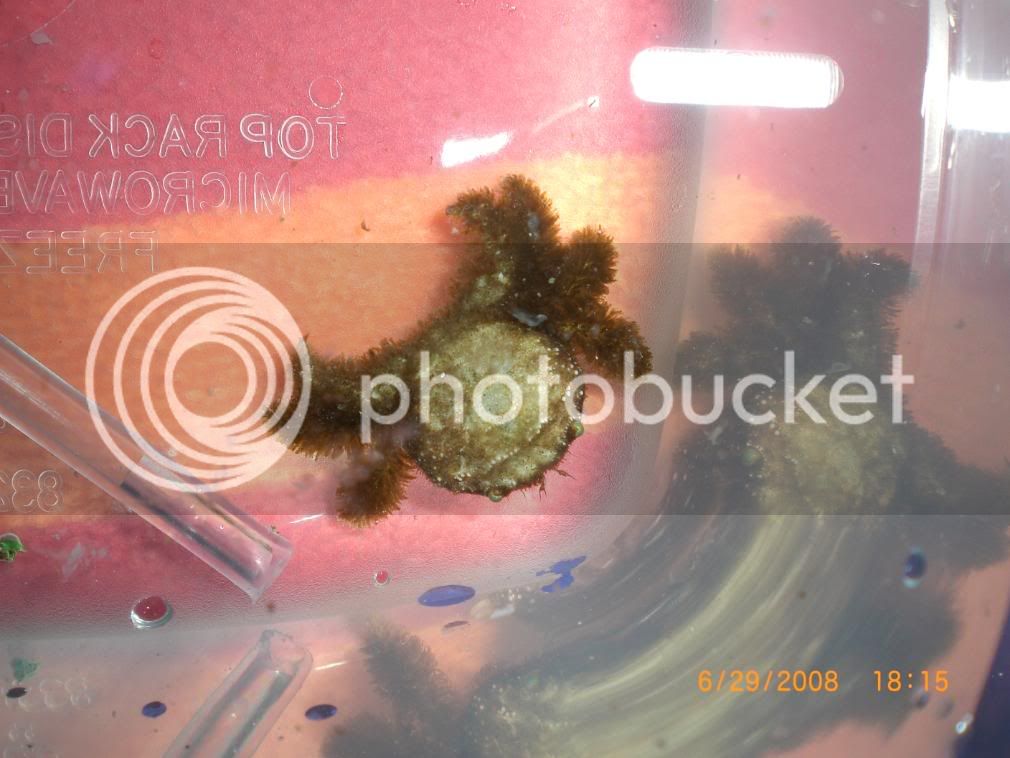 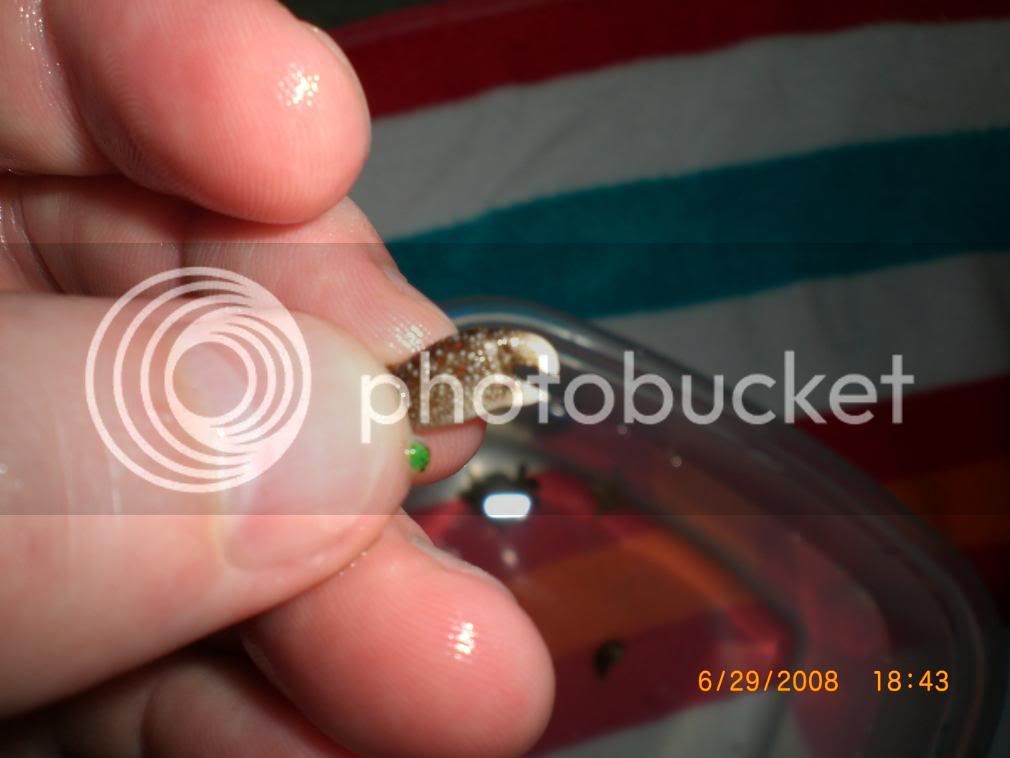 Any last IDs before I dispose of these guys? Also, anyone want them (I'm in Salisbury, MD).

Can anyone ID these crabs?

Premium Member
I use them to test my finger and thumb strength.

Wow. They've been in my tank for 6+ months. Is it possible that they don't attack their host coral, which as Myzislow correctly pointed out is a Pocillopora not an Acropora? Anyway, thank you so much for the ID and the advice from everyone. The gorilla couple are out of the tank. I haven't quite figured out their fate yet, but I might feed crab meat back to the poor cap that was being munched on. It seems like appropriate punishment
R

I had one of those living in my millipora, and he crawled out and started to eat my blue tort, and birdsnest coral. Get him before he hides somewhere where you cant reach him. Good luck, they're pretty strong for a small crab
You must log in or register to reply here.