I recently setup a 60 gallon reef tank. I bought 60 pounds of live rock that was already cured but wanted to be safe so let the tank cycle for about 3 weeks with nothing but rock. I tested nitrate and ammonia throughout the cycle. Ammonia was never present and nitrates were really low the entire time and eventually went to zero a few days after adding 60 pounds of cultured live sand. I only had the lights on for an hour or so a day just to check it out. I have 4 39 watt T5's. one blue, one purple and two white. after about a week after the sand was in and about a month with rock and sand I thought everything was good to go so bought 2 ocellarius, a GBT annenome (clowns refuse to go near it but thats another thread) and a couple frags from a guy that lives by me. I started running the lights 12 hours and in addition to testing nitrate and ammonia started testing calcium and alkalinity. I've been doing weekly 15% water changes with kent reef salt and RO water from a water store that i tested and it doesnt have any nitrates. As far as tank setup I have a 20 gallon sump with probably ten gallons of water, a reef octopus skimmer and a sock for the drain pipe that I change weekly. the return pump pumps about 600 gallons and have two korlia powerheads so total hourly cycling is about 25 times which is what i was going for as i want a primarly SPS tank.

the clowns are healthy as heck, the annonome has settled down and looks great and is accepting krill and the frag polyps are totally open and look great.

after the first week with lights on and inhabitants in the tank I experienced and huge diatom bloom. After reading on this site it sounded like that is typical for a new tank and it would clear up in only a few days which it did. After a few days with everything looking good three types of green algae started growing like crazy. Its weird because the glass doesnt get a lot on it and the sand its totally clean but the rocks are almost 100% covered. One type looks kinda like fuzz/hair, one has branch like strands and actually is kinda cool looking and the other is like bunches. the corals seem to be still doing good and dont have any growing on them.

It's been a good week and it seems to be getting worse. I've continued testing nearly daily because I am a nerd and nitrates are zero and havn't been detectable for about 3 weeks now. I've also read that during algae growth that the algae consumes the nitrate before it gets in the water column so can give you "false" zeros but i doubt this since it was undectable before the algae growth or my test is bad.


I am really confused especially that the tank is new, water seems to be right, only two fish, and i don't overfeed them. I can't figure out what the algae could possibly be living off or what to do.

Its starting to drive me nuts because it looks like its getting worse and dont know what else to do.

what am I missing?

The tank is new & normally some algae growth is to be expected as you said you already know, however, if the rocks are totally covered in hair algae & continues to get worse then there is another fuel source you might not be considering. I would like to see some pictures before diving into reasons & solutions, you may just be exaggerating (no fault of your own) when you say it is all over the rock, also some close ups would help to identify the algae itself, some are much harder to get rid of & Welcome to Reef Central.

Hello and welcome to Reef Central!

I would start by testing your source water and tank water for Phosphates. Live rock can also bind and release phosphates if previously held in conditions of excess. Also research methods of nutrient export such as chaeto, GFO, ATS. A cleanup crew (CC) can help get the algae (nutrients) off the rock and back in the water where they can be exported. JMTC & GL!
M

+100 on the phosphates. the rock is full of it. i have seen this over and over, also the ro water from the store is not ro/di. will bet it has a TDS reading of at least 8. run some GFO and start on carbon dosing.
M 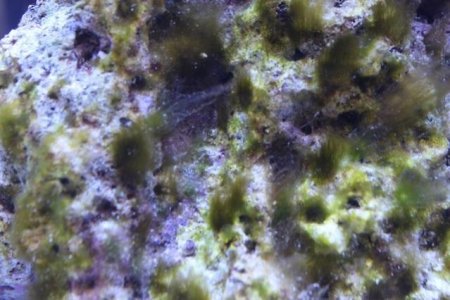 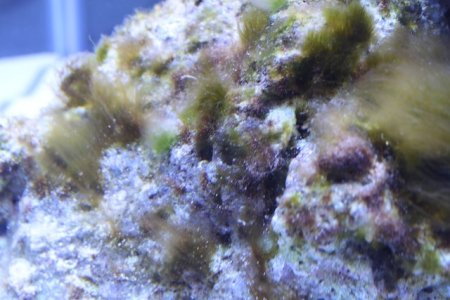 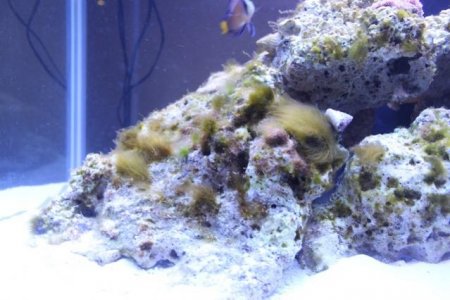 thanks jimmy. so can you buy ro/di or do you have to have a system? is the water at LFS typically the same as what they sell at those water stores? the water store has a room with a giant filter system so figured it was about as clean as you could get. i need to do some research on what tDS and GFO is to understand more. thanks everyone. this is really helping.

Reduce your light time down to 4-6 hours, 12 hours is overkill and the algae is loving it

yup, green hair algea. love your clown fish, he is a beauty. GFO is a phosphate remover. works best in a reactor but a sock/bag will work. you can get both at your LFS. your local fish store is most likely selling just RO water. ask for a TDS reading. TOTAL DISALVED SOLIDS. should read 0.00 nothing more. dont worry to much. keep up on the water changes as the rock are leaching im sure.

Well, it's not as bad as I had originally imagined, that is not totally covering your rock, it's not ideal but I figure your tank to be less than 3 months old, so your nitrates & phosphates were normally high. I doubt that cured live rock from the fish store has phosphates bound up in it so bad as to leech them out in your tank. It takes years of detritus build up & poor flow to create that type of condition. I would manually remove it with a brush (outside the tank) & do a few more extra water changes. GFO/Phosphate removers & refugiums are always good ideas, so that is another way to attack high nutrients.
B

Hey I am dealing with the same problem (very close to being over, 90% of mine has been removed)... I took some of the rock out and scrubbed it with a toothbrush, and I had some on the glass... I removed that with a razor and sucked it out when I did my every other day 10% water change. The algae is def going away for me. Im sure my problem was from phosphates in the rock as well. Add a few turbo snails and hermits to help with the extra nutrients, and do water changes. youll have the problem under control in no time.
M

ordered a phosphate reactor and some phosphate remover, got 10 more snails for a total of 17 (not turbo's, they are the smaller ones with a pointed shell), cut lights to 6 hours and hope that does it.

thanks for all the help everyone
H

Going from 1 hour of light to the full 12 hours will cause a mini cycle. You should add an hour every other day while you cycle to accumulate the tank to the light. This would cause the bloom. Also if you ever upgrade your lighting do the same to readjust it again.
You must log in or register to reply here.

M
Some problems after moving FOWLR

M
Is my tank cycled?