An observation of zoanthid behavior.

the other morning i saw these zoas looking weird, so i snapped a few pics. the only recent change i can be sure of was breaking of the monti cap next to it, which didn't change the lighting they were receiving, but did change the flow
pic taken under two 14k and one aquablue t5

pic taken under one aquablue t5

and a wide shot, taken under one aquablue t5 the orange cap on the right was recently trimmed. 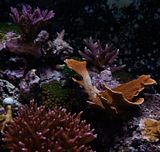 I don't know what caused this behavior, ill describe it as the skirts come down below the oral disk. is that a good explanation? anyone have any thoughts? does the word crowning describe this behavior well?
the zoas exhibiting this behavior follow what does seem to have a path, and they also seem to have their mouths open.

I haven't seen this since, and all of these zoas look healthy and normal today, a week later.

any guesses on what they were doing?

Thats the same ballooning affect that paly's have. They do that when irratated I think.

Another thing I noticed last month. a few of my AE's did that, then a few days later the tops of them pinched off & floated away & the bottom half grew a new zoanthid head. A way of reproducing possibly?

i just don't know what could have irritated them, and they are fine a week later, so not a reproduction method as far as i can tell.

i know these are pacific zoas, perhaps seperating them from ae's, which i believe are carribean.

perhaps they are spawning? do zoas spawn? their mouths are open in this position, which has to indicate something.

yes their mouths open during this time. I dont believe they spawn... I could very well be way off there but I've never herd of it.
J

Yeah, Zoanthus spp. spawn like corals. Have a pdf or two on the subject if you want - let me know and I can email them to you. Couple questions for you...

1. Do the polyps do this at night?
2. What's you water temp? Have you changed your lights at all recently, or the timing of your lighting?
3. Can you seen any polyps that have orangish small blobs (eggs) within the polyps? Or anything like this floating on the water surface?

this was right as the lights were coming on, water temp 80 +- 1
i have seen some dragon eyes spitting out small balls that i thought were white, but might have been orange, but not from these.

sure ill take any pdf you have on zoanthids.
J

Wow cool, that might have actually been spawning in a tank, something I have tried but never succeeded in seeing!

Anyway, PM me ur email address and I'll send u the pdf!

I thought they were pooping when spitting out little balls?

Thats awsome that they spawn though.
J

Hmm... pooping, spawning, eating (see surfnvb's thread)? To tell you the truth, outside of some spawning info, there isn't too much published on the behaviour of zoanthids. I do know that on occasion they "poop" (i.e. expel) degraded material like old zooxanthellae etc., but I have yet to see any species that are zooxanthellate eat (but I really want to check into surfnvb's post), and therefore I have yet to see any large "poop" events either, just the degraded zooxanthellae expulsion...

I found the pic of the dragon eyes releasing little balls.
not the best pic, but they looked like little clear balls. 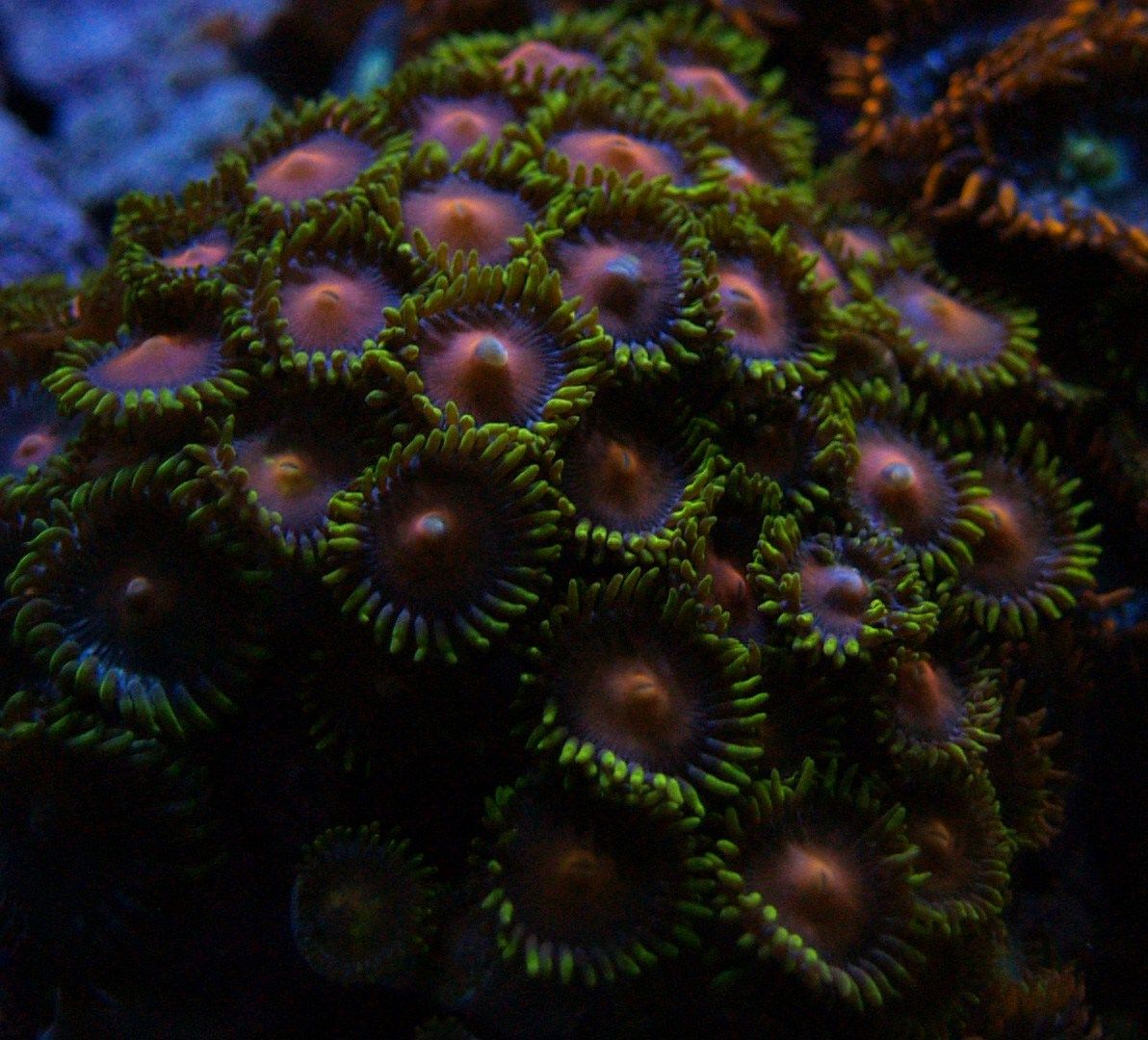 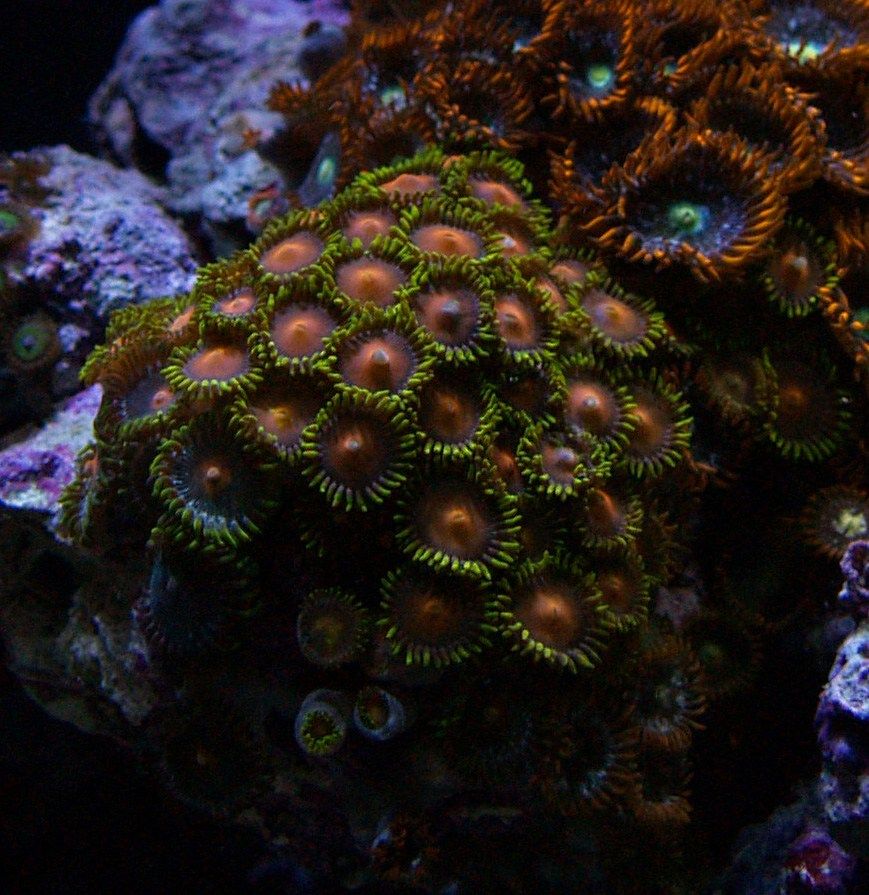 i would bet thats some form of releasing spores/reproducing. it looks really similar to how SPS release those balls from their polyps during spawning.

no wonder all your zoas grow so well, got em' so happy they are reproducing!

only problem i can see with that though is if zoas start popping up around your sps.

PS...think you could catch a couple of those little balls they are releasing? and then put them in a breeding cage in the tank? or in a small nano tank you could set up? .....to see if they devlop into baby zoas

I have only seen that happen a few times, and they take hours to release; unless I pulled them out I don't know how I could hope to isolate them. and wouldn't they need to be fertilized?
that photo was taken 4/30; anyone know the spawning time cycle of zoas?
J

Yeah I would bet that that is spawning. Over how long a period do these "balls" get released? Most likely they are eggs, and then sperm from other polyps is released at the same time (it is so small it is probably not visible though...). Not sure if the same colony can fertilize eggs, but yeah, if you can, isolate the eggs in even in a tupperware dish, there should be ample sperm swimming in there, and see if the eggs develop into swimming larvae... Wow wow cool!

Those swimming larvae can last for up to two months (they look like little clear jellyfish) until they settle, acquire zooxanthellae, and begin their colonial stage...

p.s. Spawning time cycles are unknown but prob for a few days for a few hours each session - just an educated guess by looking at corals etc.

Premium Member
do you have any pictures/drawings of what these larvae are supposed to look like? and how big?

i believe it was quite a few hours that they were releasing them.
J

Here are a couple pics of larvae (a bit later on in the process):

I think at first the larvae would be small - about egg sized - but should be barely visible to the naked eye. A dissecting microscope or even a Sherlock Holmes magnifying glass could help you see details more clearly...

Hmmm - that last post's link may not work, so go to google and search in images for "zoanthina".

i found the pic, i won't say what i think it looks like;-) 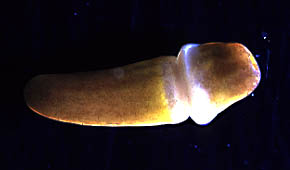 :lol: :lol: :lol: purple headed yogurt slinger?
You must log in or register to reply here.

G
Zoanthids closing one type at a time.