I've got a pair of bangais that were captive bred from another local reefer, they're close to a year old I think... pretty much full size but I'm not sure about the age. They were itty bitty when I got them, and they've always stayed close to each other in the tank.

A few weeks ago, they started spending less time together. A few days ago, I saw them fight for the first time. Today, I could only find one! The second was located hiding behind the wave box I tried to catch him but he escaped into the rocks.

A few weeks ago, I also started an attempt at bonding some maroon clowns.

Is it possible the angst from the clown drama is causing this, or have they reached an age where they either mate or fight?

Is there any chance they'll work it out? I have no idea what the genders are. If they're not going to be a pair, will they fight till death or just stay away from each other?

I had a similar experience. I got three bangais and when they were about 1 year old (maybe a little less) one of them started to get picked on by another. I removed it from the tank and the other two are now spawning repeatedly.

So if I had to guess, it is that time and sounds like you got two females.

Premium Member
There's info here about determining the sex of your fish and behaviors. They're at the point of reaching sexual maturity and you may not have a female/male pair.

Take this for what it is worth but......I have a pair of wild caught (I believe) male and female breeding pair. They are full grown (I'm assuming) and I have had them around 3 months. They have never fought with each other, occasionally the will go to different parts of the tank but not for long.

I am just guessing but I think you might have two of the same sex that reached maturity.

I can't begin to guess what they will do to each other though.

So are the males more aggressive, or the females? If it was two males, would the one have simply killed the weaker one?

I'm going to have a heck of time trying to catch the shy one.

Premium Member
Catch the aggressive one and the shy one will come out of hiding.

i agree you have 2 of the same sex that is why they are fighting. I've had my pair for over 4 years and they never fought. You will be down to one if you don't seperate them.

jfingers8 said:
You will be down to one if you don't seperate them.
Click to expand...

Darn. I was hoping that even if they didn't hang out, they wouldn't kill each other.


I wanted to catch the shy one, because I can see the jawline on the aggressor. In theory, I can attempt to trade the other one for one more likely to get along. There are some large bangais at the LFS. I have no way of knowing if they're captive bred, that sucks. But since they're big, and if I get the right gender, hopefully they'll pal around together enough that it would make it.

This morning the shy one seems to have found a safe spot where it can dart between two large rocks with a nice cave, and right near the edge of the tank. So luckily, I got some decent pics. Now to see if the pics can help determine a gender...

What do you think I've got here, two females or two males?

Here's a few pics showing male and female side by side: 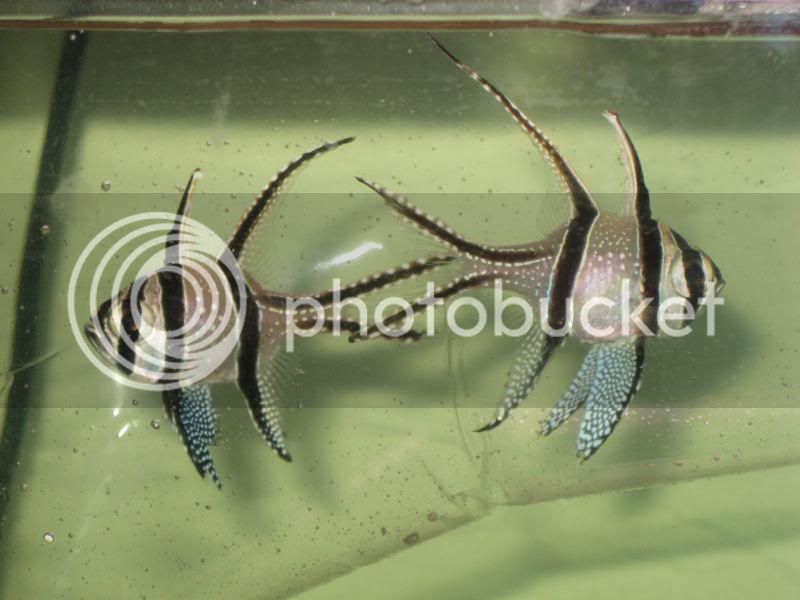 
I'm thinking two females. If I get one male, will he keep them from fighting? Wishful thinking I guess, I don't want to get rid of either of them.
N

I think from what I've read, is that females will fight. Males not so much. I believe even that if there are more males and the female is able, she will spawn with another male while the first male is still holding eggs.

I caught one of the bangais! I lost track of whether it was the mean one or not. I put it in a breeding box to isolate it overnight.

As soon as I did, the other bangai rushed to its side and has stayed there. They are kind of "nosing" at each other through the plastic, but aren't acting aggressive - no mouth gaping.

Now that they're up close to the glass, I notice that their fins are very different. So is it possible it's a male and female?

The soft dorsal (second top) fin is much longer on one than the other - which is supposed to differentiate gender.

An LFS agreed to take my bangai and has others I could try to pair with. But... I don't want to if I don't have to.

The aggressive one has been a terror to every fish, not just the other bangai. It even went after godzilla CB shrimp! Could the clown pairing drama have everyone moody?

I do plan on setting up a QT for the clowns tomorrow, to try to force a pairing among them.

What do you think? Are fins enough to guess at gender and give it another shot without the clowns stirring things up? If I release a bangai, it will be heck to catch it again.

Definitely two females. I will be trading one out for what looks like a male. *crossing fingers*

I took one to the LFS and got another one. I thought mine were full grown, but this new one is significantly bigger.

Out of the two adults at the store, this one had a bigger jaw. Now that "he" is in my tank, I can't tell if it's actually a bigger jaw or just looks bigger because he's bigger all over!

They aren't fighting... so that's success so far. The other girl was getting the snot beat out of her. I hope this isn't just the calm before the storm, as the previous bangai sizes up the new larger one...

I don't know how to post pictures but if you look on the photo album on my profile you can see the two that I have. It's a pretty good picture and the best that I have found showing a known male and female. Feel free to use it however you like. The female is on top and has a slightly longer top fin

Honestly, I can see no other difference than that and I have looked for hours trying to see anything. Funny thing is, in the 3 months that I have had mine, the top fin on the male has grown slightly and I can't even reliably use that as an indicator anymore. I still know which is which by looking at them, but mostly just by the way that they act (the female eats pellets, the male won't touch them).

I have been to pet stores and looked into a tank full of Cardinals but unless there are only a few in the tank and a couple of them are hanging out next to each other, I have no idea.
You must log in or register to reply here.