I met Camilo a couple of meetings ago and we spoke about his 10 gallon tank. It sounded amazing what he was doing in such a small space, so I suggested we put it up here on ReefCentral. Since he's not too computer literate and isn't on ReefCentral, here I am posting it for him. Enjoy!

First off, some photos: 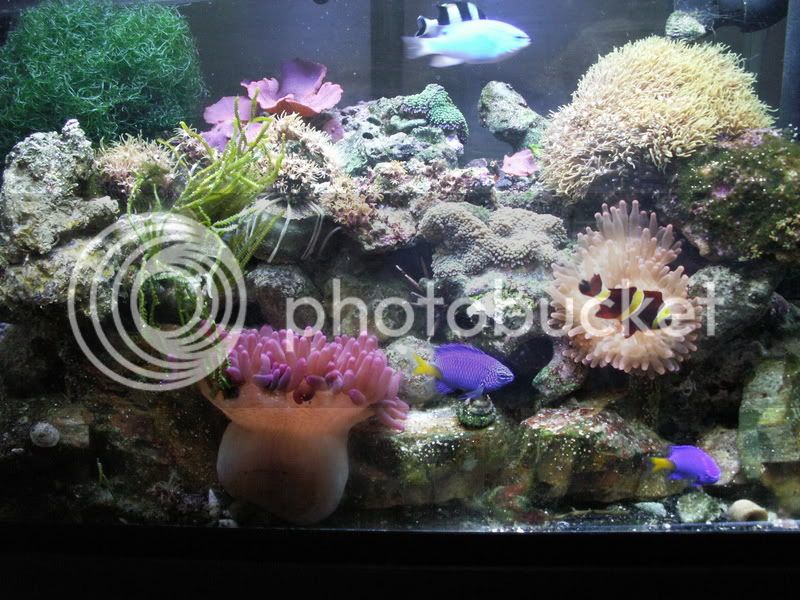 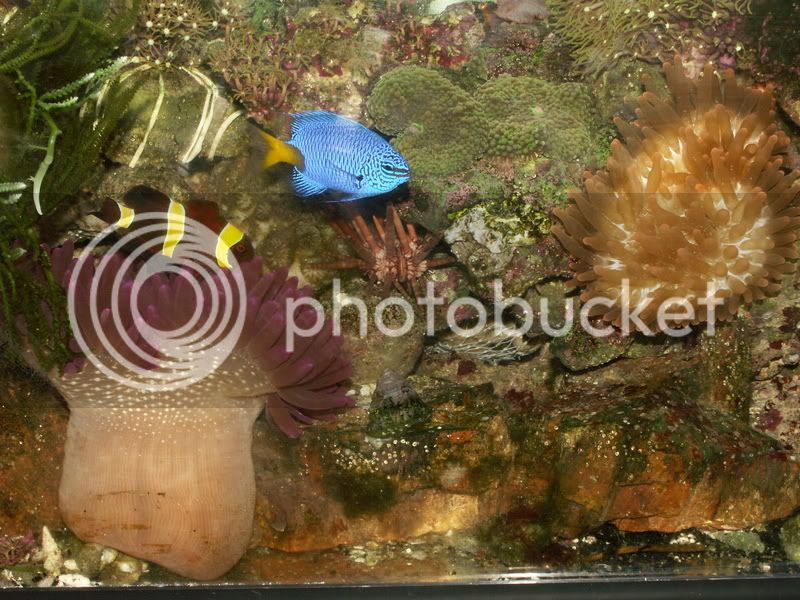 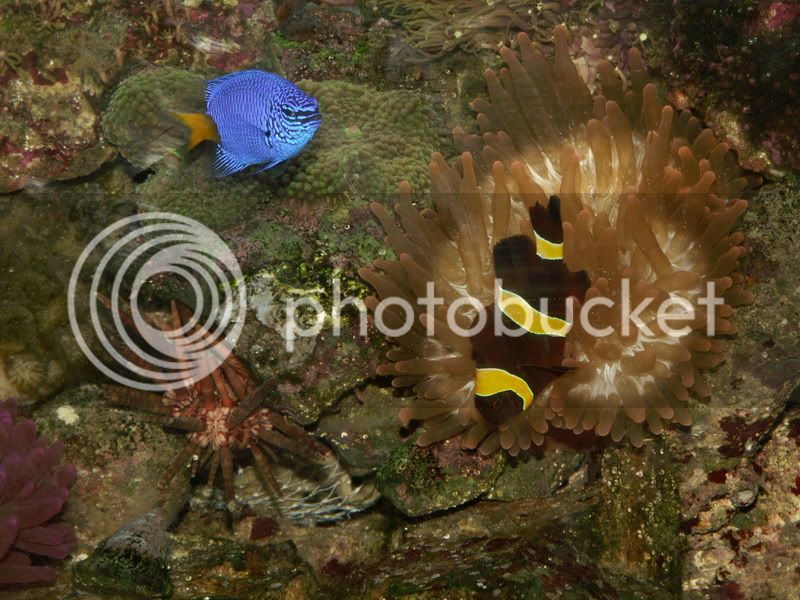 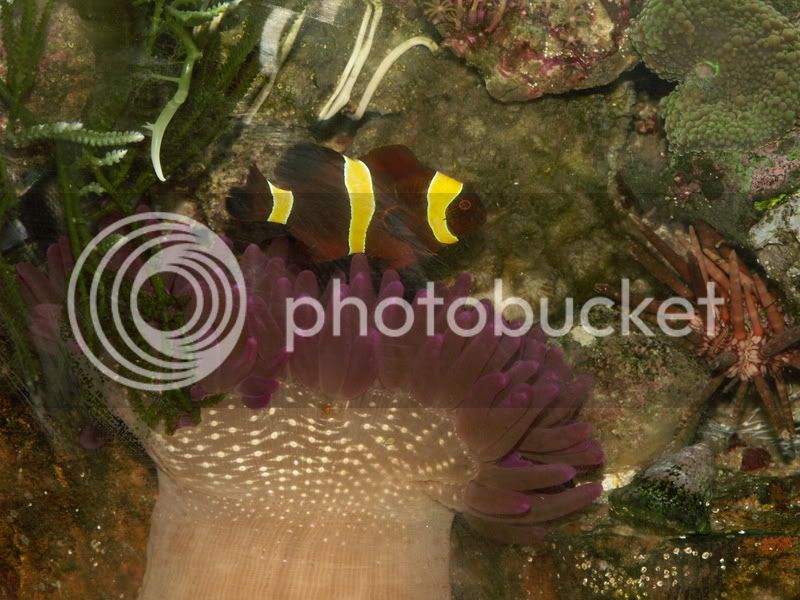 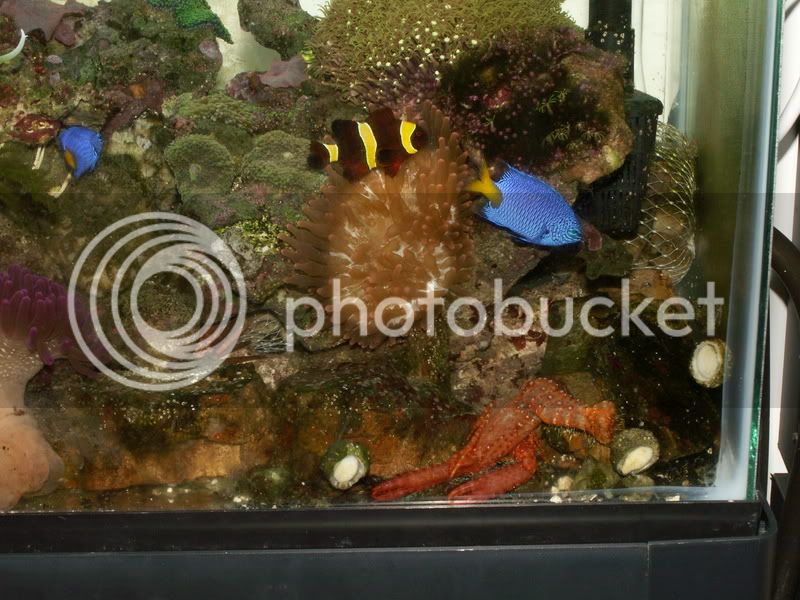 "Fortunately, I had already had ample experience in mantaining a large salt water tank, with all the trimmings, large filters, skimmer, phosphaste reactor, chiller/heater, cascading sump with ample wet dry areas for the aereobic bacteria to live and reproduce, etc. ; but when I moved from a house to a penthouse apartment on the 11th floor of the building, I could not risk making any knd of mistake, and having a couple of hundred galons of salt water seeping down to all of the other floors of the building, so I devided that the solution was to apply my previous experience, and left over equipment, in creating a new 10 Galon Nano Tank Aquarium.
My first breakthrough came when I was able to install my existing Marineland Magnun 350 Pro Canister Filter System on the 20" inches of available space, in the back of the tank. The unit includes their Bio-Wheel Pro 60 ( Actually 2X Bio Wheel 30 ) which is a perfect place to grow aereobic bacteria, and a Large Capacity Carbon/Media Filter with a Foam Sleve to catch any debris that comes into the system, and a Power Kleen Gravel Washer. Alternately, if you should only want to polish the water, you can install the reusable Micron Cartridge that comes with the Kit, but it is definitely and either/or situation, since you can only have one of the two in operation; and of course I prefered to use the available carbon and foam sleve option.
Since Corals need a lot of Light, I bought the 20"Current Satellite UR0055 with a dual 40 Watt Daylight a Dual 40 Watt Actinic, and a Blue Lunar Light, Fan, etc. and connected it to my Aqualight Digital Power Center, which has the feature that when it turns of the Actinic and the Fan, it simultaneously turns on the Lunar Light, and viceversa. I have a sepparate digital timer turning on and off the Daylight bulb, since it only goes on an hour after the actininc, and turns off one hour before the actinics.
When I discovered that I had a little bit over six inches available between the legs braces that hold the Satellite Lamp in position, I purchased a small Penn-Plax Cascade 100 filter to go on one side, and eventually a Marineland Penguin 100B Power Filter on the other side, both of which run for 24 hours a day, every day of the month, without any filters, just to provide the necessary air supply and waterfall type of agitation, without having to use an Air Filter at all; and they are connected to two sepparate 120V 60Hz. power sources, as I want to be certain that I do not make a repeat performance of a time when the filter screen dropped, and a large fish managed to stirr a few stones into the only filter that I was running, stopping it completely, & killing the few delicate fish that I had at that time. In the future I expect to replace them with two of the larger Marineland Penguin 200B Power Filters, that include a Bio Wheel each, and simply place the lamp on top of them, withour using the brackets at all. Since I don't have a wet/dry sump available, I am a fanatic about giving the aereobic bacterias as many places to live and be in contact with air as possible, since I know that the anerobic that live in the live rocks, corals, aquarium bottom, and the water itself, have no problem in breeding & multiplying.

As to the fish themselves, my favorites are a Breeding Pair of Maroon Clown Fish with Gold Bands around them. Most of the time, the very large female lives in her favorite long tentacle bubble tip Pink Annemone, which used to be the home of the small male, until the female convinced him to move to the very beautiful purple anemone, that they often also share together. Their favorite foods are: Tetra Cyclop-Eeze Micro Crab Granules & Sally's San Francisco Brand, Freeze Dried, Brine Shrimp Flakes; these were originally too large, so I made them smaller by using a small cofee grinder that I have available in the house for this purpose.
Then we have "Spot", a beautiful Panther Grouper, with a huge mouth and a beautiful set of pointed teeth. She eats fresh raw shrimp, bits of fish, and both white and red frozen mosquito larvae.
The largest inhabitant of the tank is a five inch ( Yes ! a 5" ) red lobster that is a great scavenger, and so far does not attack the fish or the corals; he lives mostly from the detritious of the fish, and any leftover food that falls to the bottom of the bare bottom ( No Sand ) Aquarium ,.where he comperes with about twenty red & blue legged hermit crabs.
And we have Fox Face which is a great green filamentous algae eatter, but also adores to take chunks our of my big balls balls of deep green wiry Chateomorpha, and of the Mexican Caulerpa.
He is joined in this work by a Large Pencil Urchin, that was actually born in the aquarium ( Must have come with one of the Live Rocks ) & a Very Large Mexican Turbo Snail, that not only eats the geen algae, but also the Red Algae, which periodically appears at the botton of the tank. There are also about twenty Turbo Snails that eat the green filament algae, and also help to keep the aquarium glass walls transparent, and the bottom free of deitritus. The Chateomorpha and the Caulerpa will also make Photosynthesis using the available Sulfates & Phosphates in the tank, while releasing Oxygen. Since I feed the Corals with all of the Kent Specialized Liquid Foods for Corals in the mornings, I only turn on the Magnum 350 Pro System from 8 pm to 8 am, to avoid filtering away these very fine food particles. The fish feed at the same time, giving them all the rest of the day to find any and all of the bits of food that may have falles between the cracks.
We now come to my Green Scat with a pattern of round black balls, normally not found in aquariums, since he is mostly a fresh/brackish water fish, but can be readily adapted to salt water. He will eat any fresh of frozen food that you may feed him, and is really cute when he follows my hand, wherever it may go, with the food dispensing, tiny round two sided plastic spoon, that I fortunately received with a Hatch 'n Feeder, Brine Shrimp Hatchery, and the spoon has been a blessing in disguise, with a small size cup on one side, and a larger one on the other.
The rest are all very hardy Damsels, that were the original denizens of the tank, when it was originally installed, the first day of June 2006 , and include two deep blue damsels, with yellow tail, one with a full Phosphorecent Baby Blue Color, three with Vertical Zebra like Patterns in Black and White, and a Black Domino Damsel. These Damsels and the Scat will eat almost anything, freeze dried or frozen, but they all love the Argent Cyclop-Eeze whole freeze dried crustaceans. "

If you would like to discuss his tank with him, I'm sure you can catch him at one of our meetings. It's a fascinating setup.
N 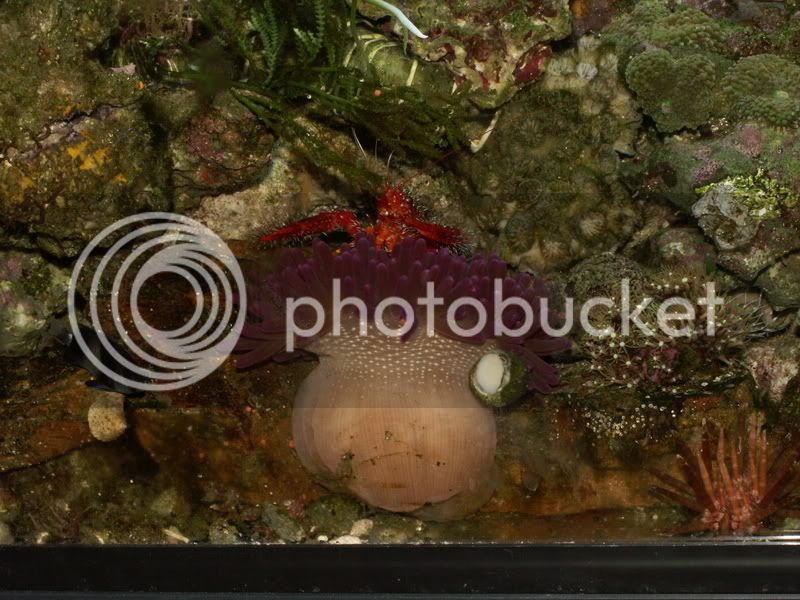 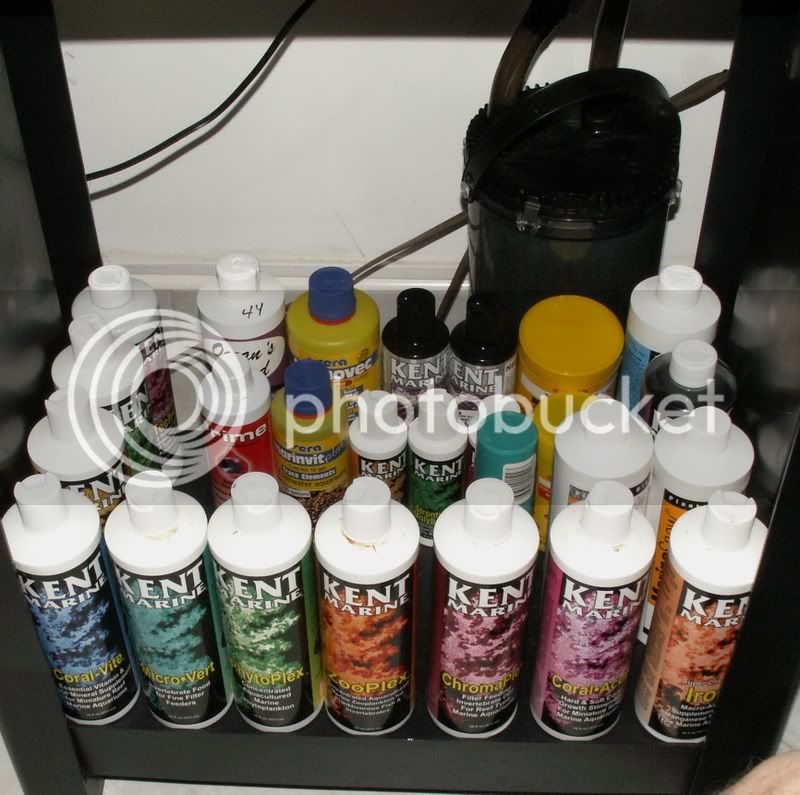 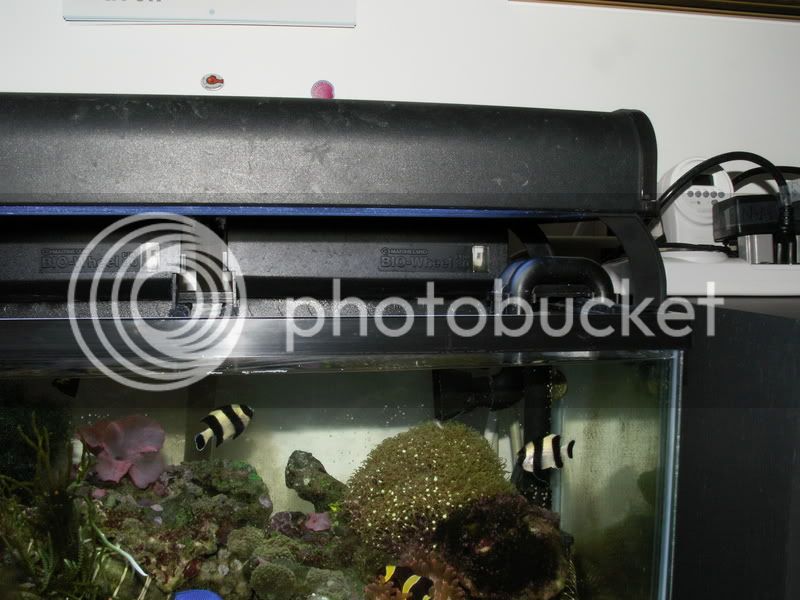 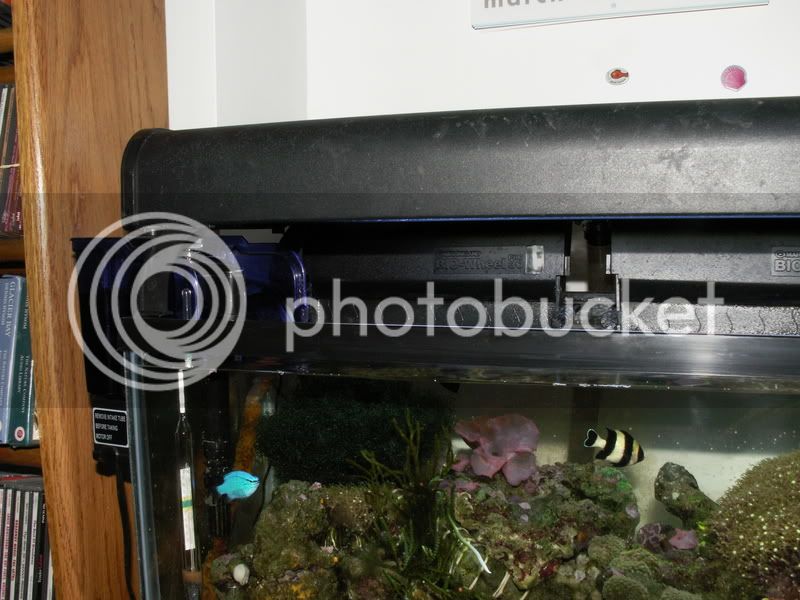 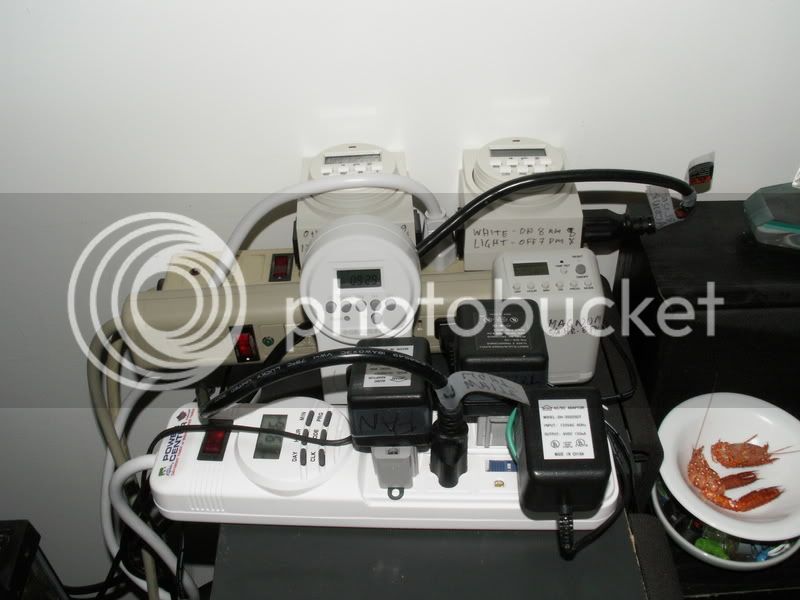 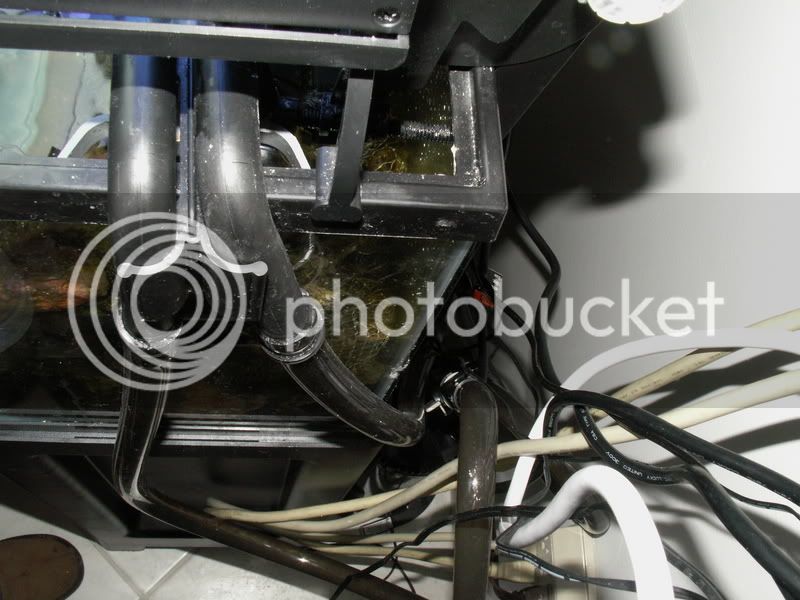 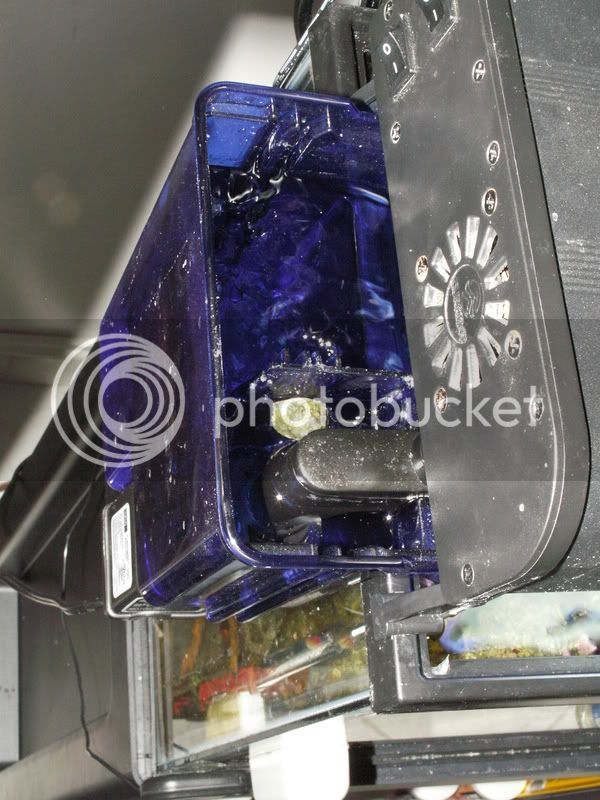 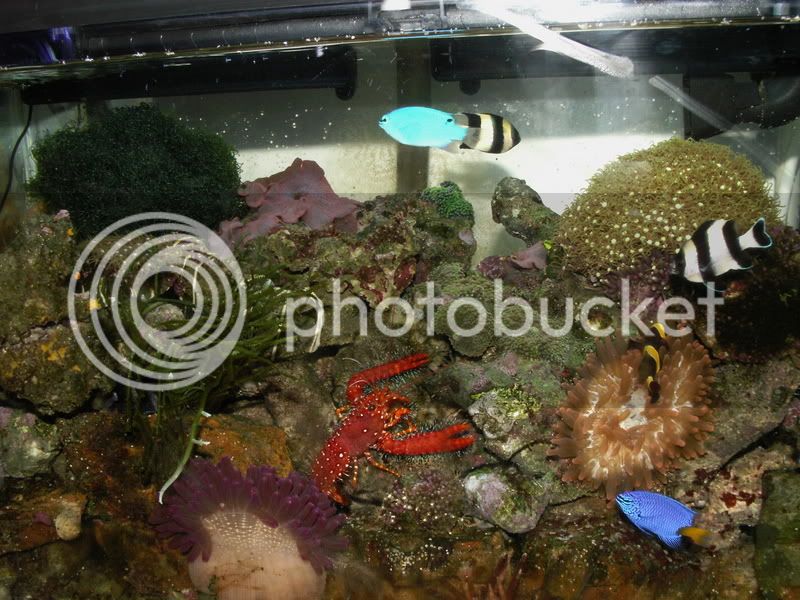 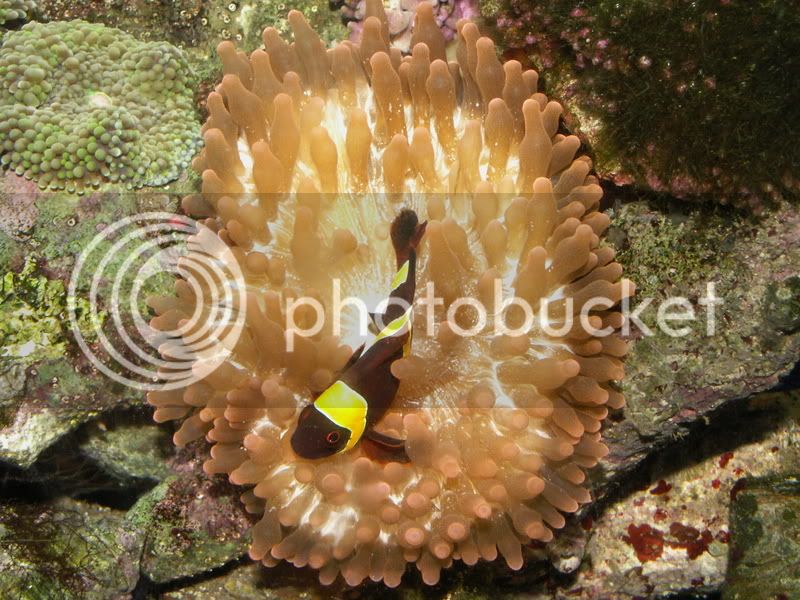 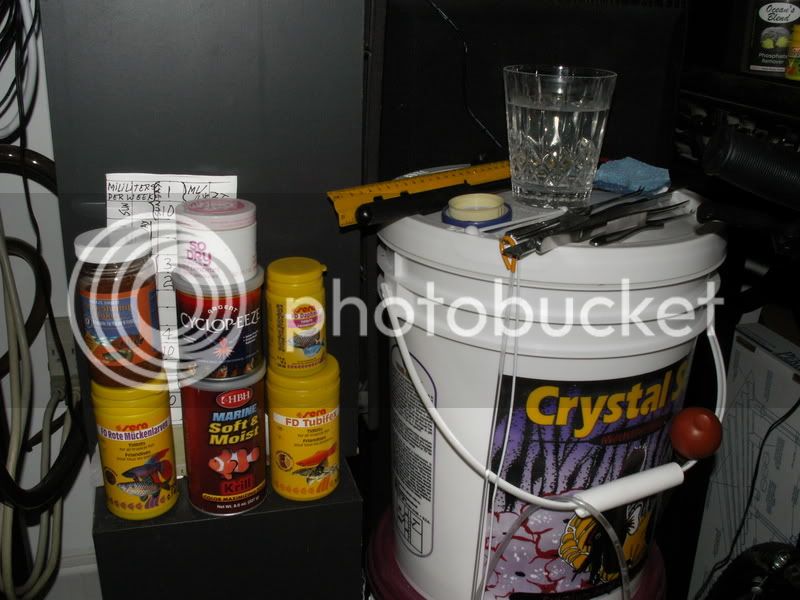 Very impressive tank Camilo, To be honest at first my first reaction was that the tank was way too small for all the fishes you have there, but then after reading all the article I realized that it was big enough to keep them happy since they are breeding.
I also notice the degree of passion that you seem to have when you described your system and obviously that you tried your best to keep the water quality by using all kinds of unconventional methods that have proven effective in your tank, I commend you for that.
I would like to see your tank in person one day, Good luck!
N 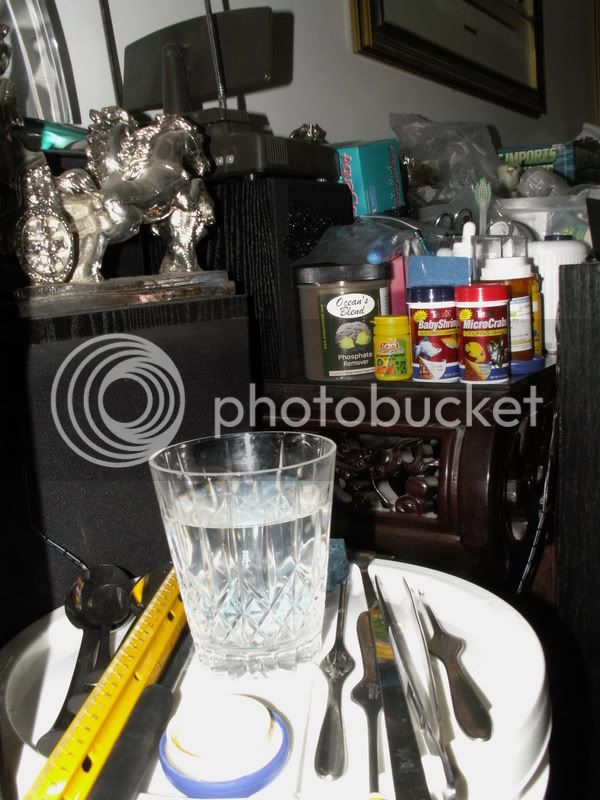 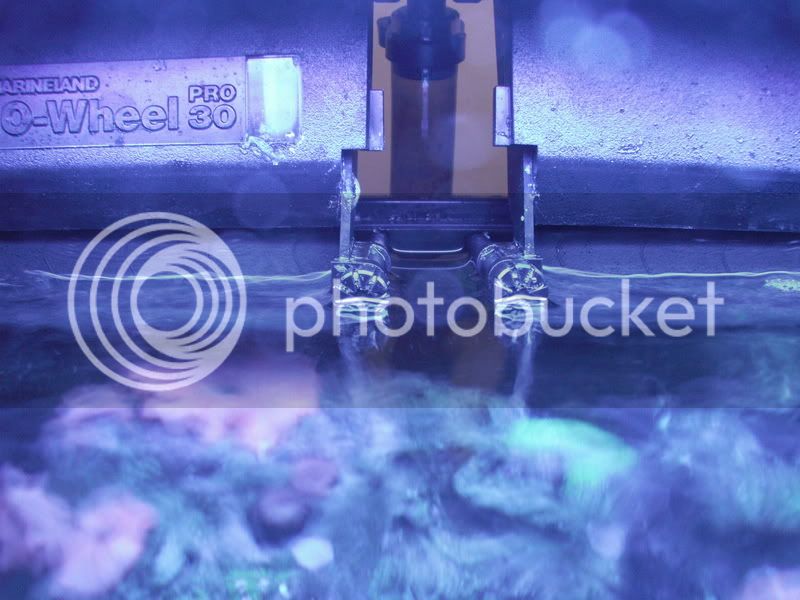 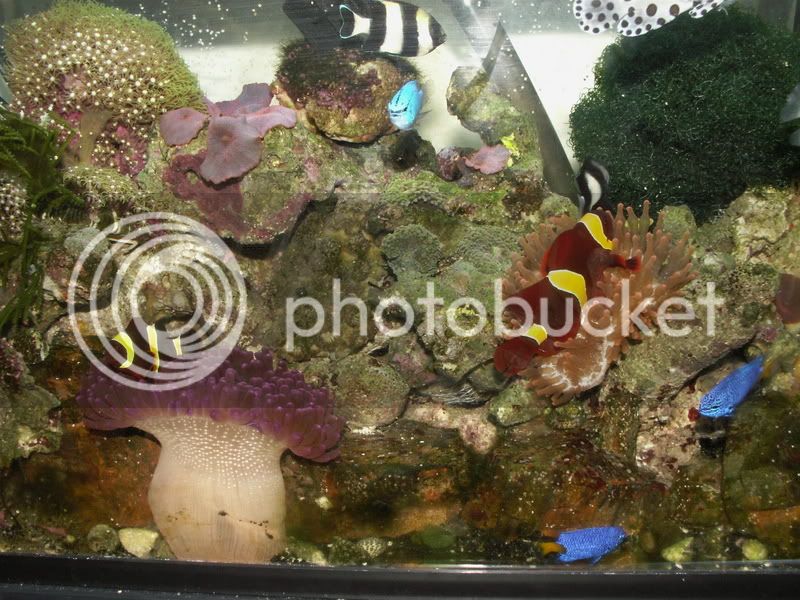 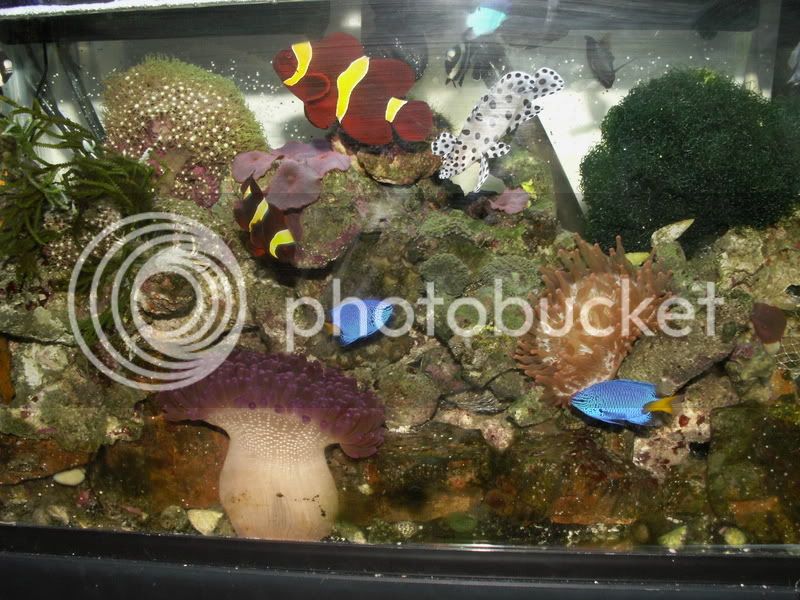 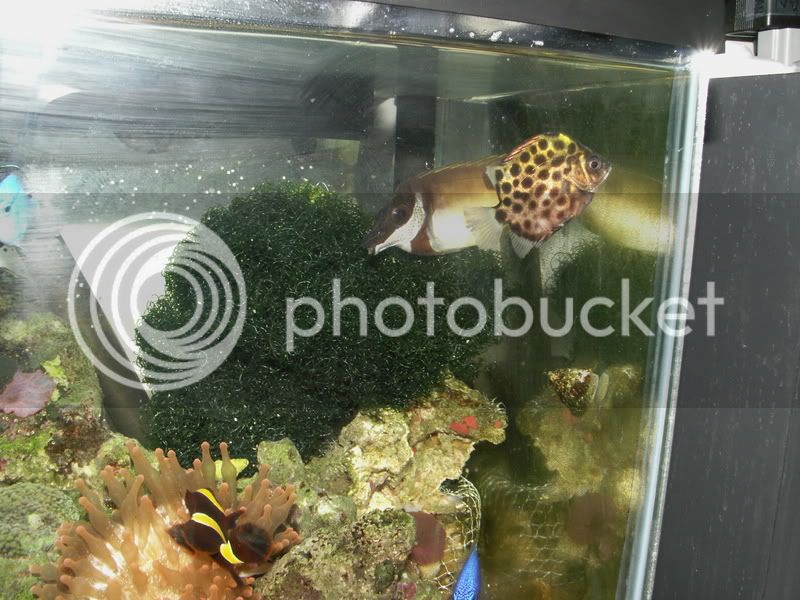 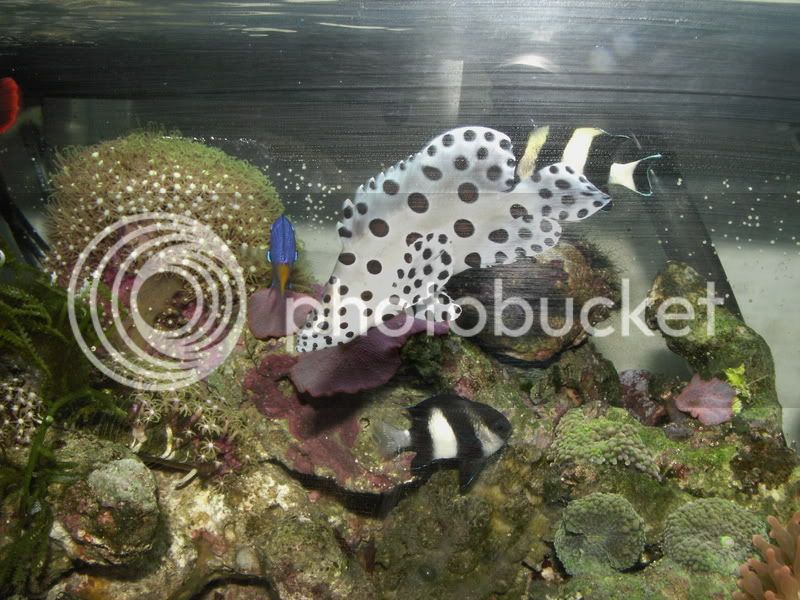 good job/I know i couldn't keep up with all the tasks u describe-great stuff. LOL I thought I had too many fish in my 200 LOL
guess not maybe i'll go for like 10 more!

Manny, I think Camilo has more chemical bottles in that stand than you are use to seen in an surgery!
Z

does he really have that grouper in a 10 gallon tank?! and the fox??

i agree w/ your first opinion rogger to many big fish in to little a tank. it is one thing if they where small fish but those are large fish. i think putting so much thought into keeping water parameters up, the same thought should have been put into fish selection.

<a href=showthread.php?s=&postid=9838457#post9838457 target=_blank>Originally posted</a> by Rogger Castells
Manny, I think Camilo has more chemical bottles in that stand than you are use to seen in an surgery!
Click to expand...

are you an anesthesiologist? that whole gasman thing makes sense than. lol

<a href=showthread.php?s=&postid=9839462#post9839462 target=_blank>Originally posted</a> by jessp
i agree w/ your first opinion rogger to many big fish in to little a tank. it is one thing if they where small fish but those are large fish. i think putting so much thought into keeping water parameters up, the same thought should have been put into fish selection.
Click to expand...

Its truly amazing that them critters are alive and apparently doing ok.

not only waaay to many fish but alot of those dont even belong in a tank that size ... i mean even if there was a sump wich there prolly isnt since theres cheato in the display:eek2: looks cool as hell i just feel bad for those fish

I feel terrible for that foxface and panther grouper. Sorry, had to say it too. JOHNNY
O

So I guess you'll be putting some tangs in there soon, heh?
No, seriously, this is getting absurd. I think this is an April Fools joke coming at us 4 weeks late: Am I counting right: 10 fish???
2 Maroon Clowns
2 or 3 Yellow Tail Damsels
2 Domino Damsels
1 Chromis
1 Panther Grouper
1 Foxface
1 Scat
----
10 or 11 fish? Foxface! Panther Grouper!
Dogs and Cats living together!
Anarchy! Chaos! The fall of Western Civiliazation!
I'm gonna go get more fish now.
R

Yeah that seems a little to crowded for my taste. 10 fish in a 10g no matter how well you keep the water up is insane just becuase of the space constrants. I feel bad for the grouper and foxface especially.
You must log in or register to reply here.