Can I take apart my stand?

Premium Member
I'm going to try posting this here. Maybe you guys are more knowledgable about this stuff than in the newbie forum.
I am trying to fit a new sump under my tank and it won't fit unless I remove the central post from the stand. Is this safe to do? I think the pictures explain it pretty well, but in general, the tank does NOT sit on this post or on the horizontal beam that this post supports. Maybe it's just to stabilize the stand and could be removed for a few minutes? DT is full.
Suggestions? 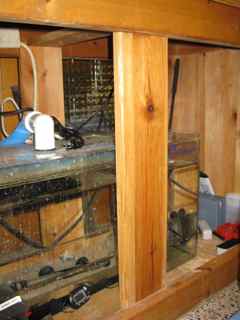 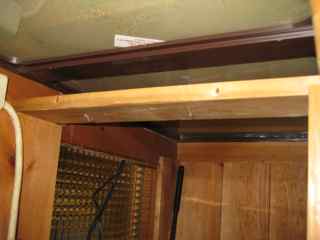 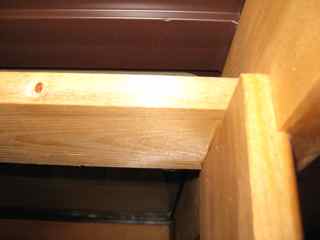 The crossbeam between the two vertical legs looks like its just for stabilization. However since the legs look like they are supporting the main front beam and appear to be sunken in it by 1/4" its probably load bearing. What is is the thickness and width of the front beam? How many gallons is your tank?
R

Half way down the page is a set of four images that show how mark was able to safely remove the center leg while still supporting the tank.

Premium Member
UTCReefer...the tank is 75gal and the front beam is 1/2 or 3/4in thick. Sorry, it's a school tank and I can't measure now.

I had seen Mark's page before but somehow it seemed more involved than I wanted to get.
Thanks

What about removing the tank and dropping the new sump in from the top?

Premium Member
That would be great, but tank is FULL.
U

You could also empty the tank 1/2 or 3/4 of the way and then remove the brace. The problem isnt really that it will fail when you remove it, at least not within seconds. Its that once the support is out the beam may sag and you wont be able to get the support back in.
H

I think I agree with UT. Since this appears to be a fish only w LR tank, It would be best to empty it by half... providing you have a place to store the water. Perhaps temporarily storing the water (and maybe some rock) in a new, clean, trash can. Assuming this is a 4ft tank, I would say that vertical is important to keep the sag out of that crossbeam, so make sure you return/replace it.

Short cuts have a way of turning into long cuts, and by removing the center brace, you may end up starting a long and complicated adventure. Even longer than the one you didn't want to emulate. We would all want to read and see the adventure, but like gawking at a car accident in the other lane, it would be better if it didn't happen.

Why? There is a prime chance that removing the brace will cause cosmetic damage to the stand. If you have to saw it out, it will no longer be the same size when you replace it, and the damage will be more than just cosmetic then. Also check all your measurements beforehand to be sure the new sump will fit and all the hoses and fittings needed are on hand, maybe some extra parts too just in case.

I would get a couple clean plastic trash cans. Make up your water change water at least 24 hours in advance in the standard container you already use for that. Add clean water from the tank to each clean plastic trash can. Remove the live rock to one then catch out the fish to the other and then add a few live rocks from the first trash can to that one ( a step that keeps the fishes' water a little cleaner), and start an airstone in each trash can.

Lift the empty tank off. Replace the old sump, using as much of the old filter material as possible without cleaning it more than shaking off debris. (If you plan to replace the old filter material, do that in a week or a month to reduce the number of changes going on at once.) Turn off the airstones. Replace the tank which you might clean up a little if you want, and add water from the upper levels of the trash cans which has settled out a little with the stones turned off. Replace the live rock, add more water until you are down to the debris layer in the trash cans. Consolidate the trash cans into the fish one. Restart the airstone for that one. Top off the tank with the water change water and get the sump started. Add the fish. If you didn't quite make up enough new saltwater, wait for the remaining water to settle out and use the clear part. It is important not to overclean, but removing debris especially that settled into chunks in unseen spots is fair game.
You must log in or register to reply here.

R
How can I get rid of these