Just picked up my first clam. A Crocea. I have him in the sand bed sitting pointed straight up. It looks like I can see through his shell on the side farthest from me. Kinda looks like he used to be leaning on that side and that is where his foot came out. My question is should I re-place him so that part is in the sand? Leave him, he will adjust to his new position or Let him move himself?

I am no clam expert but I did read that you should try to find a rock to rest the clam in so it can take a foot hold. The sand can irritate the clam though you will see a lot of people with their clams on the sand bed.. As long as you have enough light I don't think how you position it will matter so straight up should work.

I would try to get a flat piece of rock or something like that under him so he can attach his foot to it... other than that he should be good to go.

I do remember reading that a piece of tile under the sand will allow him to attach to something and still be able to move him if I wanted. I bought some tiles tonight.

Crocea clams are rock boring clams and are usually found in nature close to the top of a reef in the rocks. Obviously they need a ton of light to thrive so I would move the clam up from the sand into your LR and as close to the light as possible to insure that it thrives.

IMO if it does attach to the tile and you move it. You have to think about how natural the tile is going to look.. I would go with the live rock. Look for a piece of LR with a V shape in it and use that.. Its also another excuse to go to the fish store..

Using clam shells as a base works great. You can get a bunch of clams at the grocery store, make a nice dinner for yourself or chop up for a fish blend and then take 1/2 of one of the shells and place the clam on top of it. The clam will connect to the shell and you can move the clam whenever necessary.

I think I have a clam shell in the tank allready I'll try to get it and get it under him. I wasn't quite prepared for a Crocea I have been doing my research on less light needy clams, and wanted a Durasa. The lFS got some in today and I have the Halides here so I grabbed the best looking one. Tomorrow I'm working all day on the halides. The Durasa is a send dwelling clam so that is what i was prepared for. This little guys prefers the rocks? I'll try to get him on the rocks with a clam shell under him.

when you think about it... most of our aquariums are the depth of a tidepool (with exception to some of the mega tanks I have seen that are over 4' deep)... on a shell in the sand bed is fine as long as you have good light penetration (MH).

<a href=showthread.php?s=&postid=11683479#post11683479 target=_blank>Originally posted</a> by hebygb
when you think about it... most of our aquariums are the depth of a tidepool (with exception to some of the mega tanks I have seen that are over 4' deep)... on a shell in the sand bed is fine as long as you have good light penetration (MH).
Click to expand...

I am not in total disagreement, but I do disagree with the analogy because or halides are not as intense as the sun, therefore making our tanks deeper than a tide pool. Yes, many can and do survive well in the sand, but if it were mine, I would get it up on the rocks

OK. Thanks for all the help guys. I found the clam shell and set him in it and set item both in the rock. How much can clams move? i just looked and he isn't where I placed him. will he "walk" around to find a place on my rock that he likes? Or did he just fall over?
J

Fuppets, did you get them from Exotic Aquatics? I was going to stop in there last night to take a look at them. How nice were they?

Nice enough that I couldn't walk out without one. I am kinda ffrustrated right now. This isn't the type of clam that i had decided I would start with. I didn't research this type and now I'm trying to learn on the fly.

Lights just came on. I'll try to get a good pic. He isn't staying where I placed him.

I added 2 croceas to my reef about 3 months ago. Here's my experience, YMMV:

As noted, croceas are rock boring and will adapt/acclimate better when placed on a solid rock surface. I placed mine within the rockwork.

Croceas are a higher light requiring clam. I run 250 HQI MH and have them sitting about midway into the tank (about 13" from the surface).

Both stayed where I put them, but it took a few days of repositioning them after they fell over before they started to put their foot down. What was happening is that they would open and close their shell in response to new stimulii (fish swimming near/over, fluctautions in random current, etc..) sometimes with enough force to topple them over. While this was frustrating, it was important to place them back where they were. IMO, this helps the clam acclimate to its new environment.

After 4-5 days of righting the clam after it toppled over, they both started to lay down their foot. One faces front which is how I positioned him, the other has turned 90 degrees and faces sideways. Since both have established a foothold on the rock, I am just leaving the sideways clam as is. I can still see the mantle fully and if he's happy facing that way (probably has to do with how he fits in the rock he's on) I am not messing with him.

Neither of them truely "walks" (I have a large squamosa that "walks" himself toward the front glass making cleaning difficult, but he is sand dwelling and older), but they did topple themselves over a few times in the begining.

General care for croceas 2" or larger is provide them with enough light for energy production. If you would like to, on occation give them a squirt of phyto every now and then (or just add it to the tank water - the clams will filter what they want to eat). Clams under 2" require regular feedings of phyto because their mantles are not large enough nor mature enough to produce enough energy from light for the clam to thrive.

Croceas are fairly hardy for giant clams and so long as you provide good water quality, good light and a stable environment they should do fine in your home reef.

My large squamosa creeps to the glass also. I'm glad someone else is dealing with this!

That helps a lot. I have VHO's and working on the Halide system some today. He is about 10 inches below the sufrace. I have SPS below him that are doing well. Got some pics. Up soon. 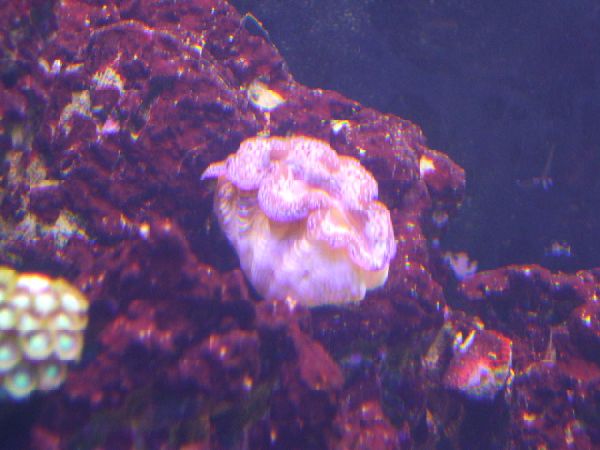 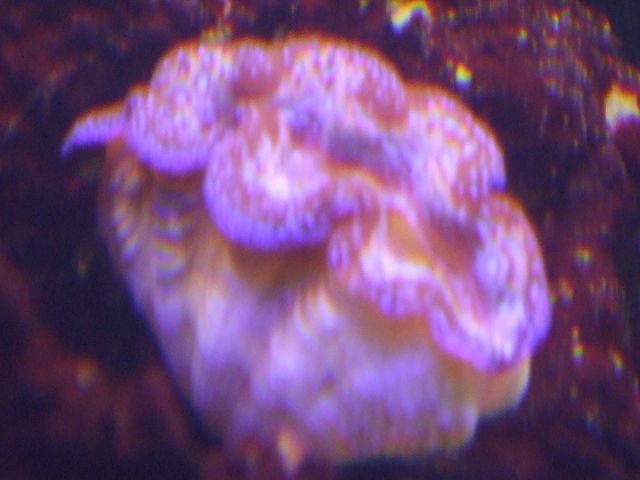 I found a piece of LR rubble that seems like it will hold him in the spot until he grabs a-hold. He has room to fully open but shouldn't fall over.

I feed Micro-vert and phytoplex, both by Kent, both once a week. About 3-4 days apart, and turn off the skimmer for a few hours. Should I feed anything else or increase the feeding a bit? Oh on both I feed 4 capfuls each time. This little guy is about 2 inches.
J

Shawn, I would cut downor stop on the feedings and get your MH lights over your tank. The algea seems to dominate your tank at the moment. With microvert and phytoplex you are only feeding your skimmer and algea at this point. IMO

The clam is a nice addition to the tank.
You must log in or register to reply here.

G
Is my clownfish sick?