Premium Member
I have a new Marineland 48x36x27 tank on the way. I will have the majority of three sizes viewable (with the exception of a vortech/tunze or two on the sides).

Now the issue is, I REALLY like having an open top setup (with a wrasse screen). Having tons of room on the front to reach in, take pictures, etc is very important to me. In addition, I think reaching in on the sides is going to be even more important on this new tank due to the size. I'm not short by any means (6'4"), but at 36" front to back and 27" tall, even my long arms stand no chance.

In addition, this is going to be in the living room, and relatively close to the sitting area. That being said, obviously it's not really possible to do a completely open top as the light would blind those sitting close.

So I guess I'm looking for a little bit of both? It's a hood, but not a hood, built kind of like a hood, but not actually on the tank? I've searched and searched, looked at all the stand and hood threads I could, and really don't see anything like this. The whole actuator idea is cool, but really looses appeal if I have to raise/lower it all the time (plus if my lights are raised it will kill the color/intensity of the corals). One option might be to stationary mount the lights to the wall, but have the actual hood raise and lower slightly, just blocking the direct blinding view of the lights when it's down. Another really simple option is a cloth style hood, which as cheesy as it sounds actually looks and performs pretty well (wife made one for the 180 in the basement to stop the blinding light).

Ok... lots of blah de blah... Drop some ideas in here, or even better yet some pictures if you follow my logic what so ever.

Premium Member
No responses at all Unfortunately as I wasn't able to find any pictures of this type of setup, I didn't expect a ton of feedback either. A little bump in hopes that someone has some ideas.

If there aren't responses due to not understanding what I mean, obviously mention that as well and I'll try to clarify.
H

Do a lift out panel instead of doors on the "hood" and possibly the sides too. Using just a simple frame to keep everything in place. That will block the light and give you unlimited access.

Hope I explained that well enough...I can see it in my head

Premium Member
I do follow indeed. Something as simple as a small piece of velcro could hold the panel in vertical place while the bottom edge rests on the rim.
H

I've seen it done with...hmmmm...corner posts of wood with channels cut for the board to slide up and down and hold in place.

Wish I knew how to use all the fancy sketch software I'd try to sketch something out...much easier than trying to babble my way thru it
J

do it on paper and scan it lol

Here's how I did mine, I ran a cleat inside, so I can adjust height as needed.
You could even do something similar w/ a reverse cleat setup, you'd just have to make taller.
I also recently saw some new brackets coming out from Current soon. 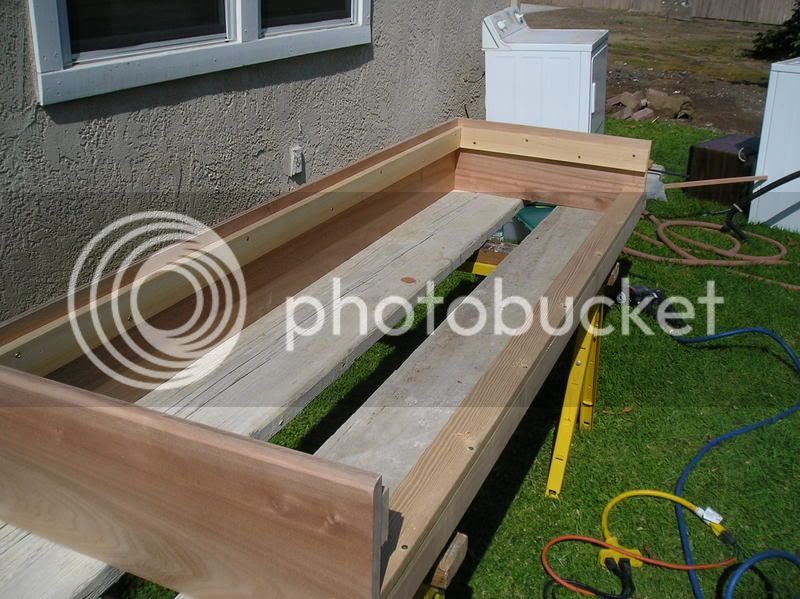 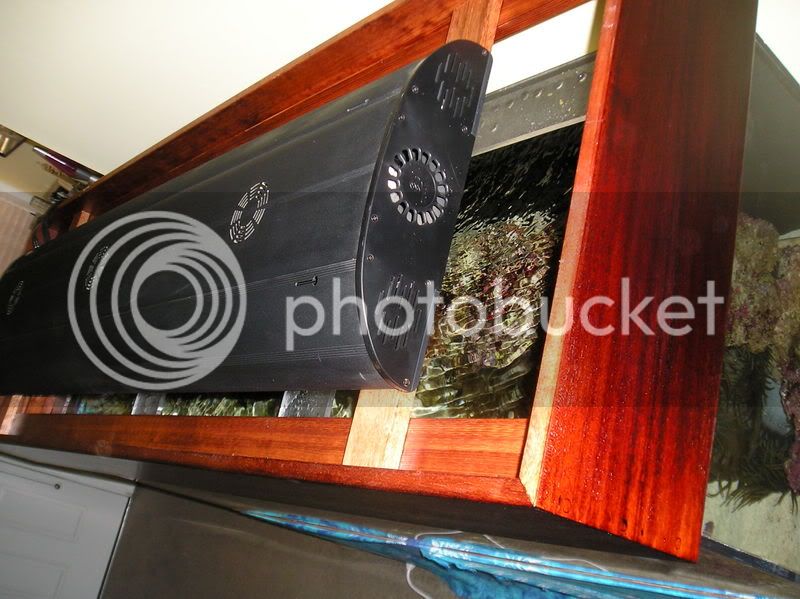 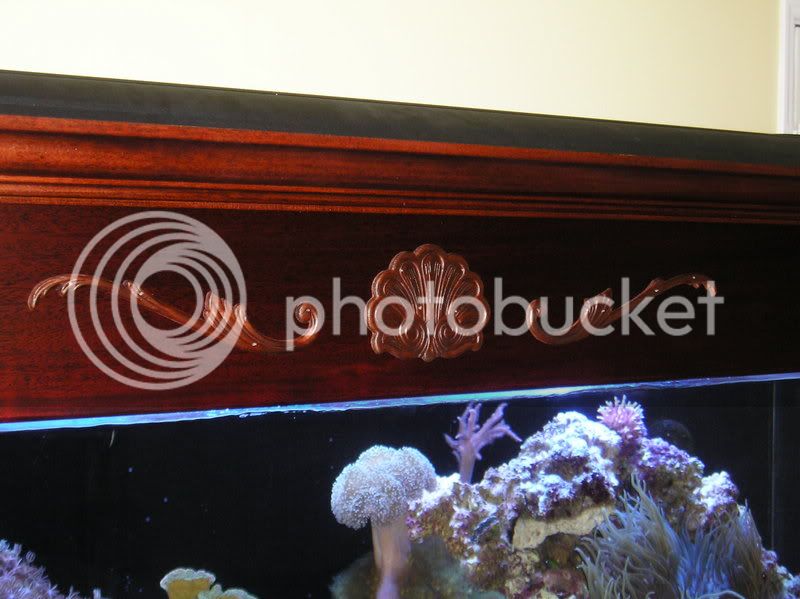 Well that would work...if I knew how to scan, I think my printer is a scanner too

i like this idea. keep me posted if you could. i am about to start a hood DIY project soon. but like you i like the open top idea

One of our local guys did one similar to mine, but taller to accomidate luminarcs.
He used the coated wire shelving used in retail stores, w/ adjustable brackets screwed into wall studs to hang them from.
I love the open top, cooler/gas exchange, no light spill, and from couch looks like closed hood.
I've seen others use conduit for brackets.

Premium Member
Yeah, I've seen a couple of tanks with shelf brackets and that type of thing to support the lights. I'm liking either the removable side, or the though of the hood itself on rails or an actuator for lifting. Either way, the lights themselves will be mounted to a wall apparatus (or ceiling) and independent of the barrier/hood itself. The trick will be getting it sturdy enough to be 3.5' deep front to back and 4' wide. That's a pretty deep item to have attached to a lifting mechanism just attached at two points on the wall... unless I do something with pulley's from the ceiling that lift the front and back all at once...

Not sure if this is what youre looking for, but the hood hangs from the ceiling by some cheezy lamp chain, i will eventually replace it with a pulley or small winch in the attic. I have 3x250 and 2 vho's. 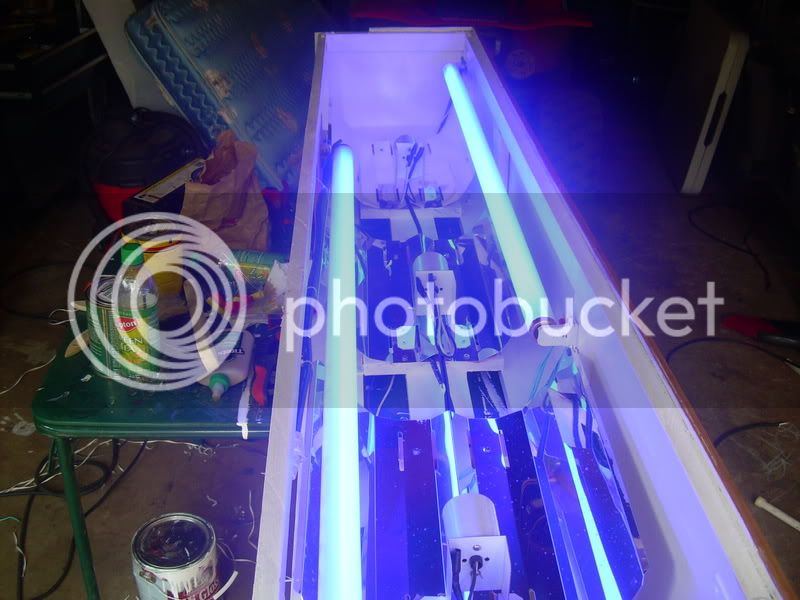 the glare IS NOT this bad, the camera was on the wrong setting. 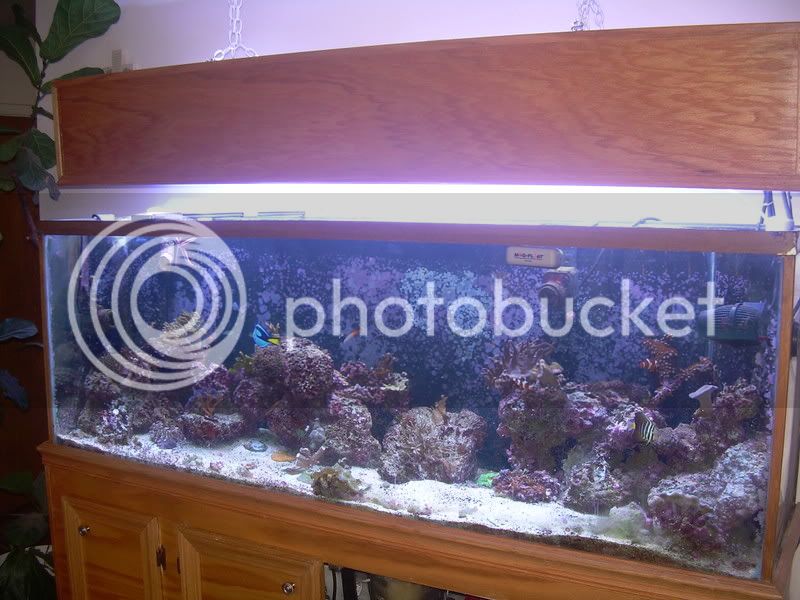 mine is done with a simple 1x frame, i routed out grooves for 1/4" luanne panels to drop in. everything is painted, white primer on the inside, black on the outside. the panels slide up, i have a 1x behind them with a hole for a dowel to push through and hold each panel up.

i like the design, i have lights hung now from various levels from PVC rods, if my wife lets me buy the lumenbrights i want then they'll end up suspended from the ceiling. you can get at everything you want, close it off neatly, and open the whole thing up for ventilation on really hot summer days. the whole canopy only comes off with major rewiring events. lots of places to clip fans on, the list goes on.

i'll try to dig up some pictures, still at work now so nothing useful here....
D

oh, and the top on mine is completely open, it's in the living room as well; the trick is to have a tall canopy, mine's 22" i think. the light "leakage" is off the ceiling, it's not blinding to anyone.
You must log in or register to reply here.

B
Whats up fish nerds!?

A
Need help with control logic