and now he/she is mine! They have already removed the picture from Diver's Den so you'll have to wait for the arrival pictures.

I have a lovely thick sand bed in my 140 gallon tank. I will need to add some more rubble from my 90 gallon tank to make sure there is plenty for the fish to pick from to build its den.

I have wanted a jawfish for quite some time so I am very happy.

Any jawfish owners want to share pics or give advice?

You are gonna LOVE this fish. jawfish have more personality than most people.

Team RC
You will need a TIGHT cover (NOT egg crate). They are proficient jumpers.

Ditto the cover. Mine has gone nuts a couple of times and whacked the lights in his panic. There's nothing at all aggressive in my tank. Every few days, the light hits the tank just right so he sees his reflection and comes out of his burrow to attack it. He'll spend hours looking obsessively for the other jawfish that was in his territory. Then another fish will swim too close or someone will walk by the tank, and he gets spooked and darts. Most of the times it is for the rocks, but he's hit the lights at least a couple of times and hurt his fin doing it once.

Make sure you have lots of shells, and don't worry when you see him pulling passing snails into his burrow. Mine grabs living snails all of the time to use as building materials and then seems cranky when they wander off again. :lol:

You will love your blue spot. Mine is definitely the most entertaining fish in my tank.

Was my favorite fish till he jumped out through my mesh top.

I almost bought that fish off DD last nt but due to the jumping issues i stayed away.Good luck with him!

Team RC
I also think they like cooler waters.

<a href=showthread.php?s=&postid=14151982#post14151982 target=_blank>Originally posted</a> by michellejy
Ditto the cover.
Make sure you have lots of shells, and don't worry when you see him pulling passing snails into his burrow. Mine grabs living snails all of the time to use as building materials and then seems cranky when they wander off again. :lol:

You will love your blue spot. Mine is definitely the most entertaining fish in my tank.
Click to expand...

My diamond goby also hauls things to his den and some of them are living. The snails seems to have learned to just wait until evening when he goes to sleep and then they glide away. (If they try to leave when he's awake, he just fetches them and brings them back.)

Don't worry, the diamond goby and the jawfish will be in separate aquariums. And based on a huge consensus here at RC, the jawfish is an escape artist extraordinaire so I will check the cover to make sure there are no places to escape to.

Diver's Den has already shipped my new jawfish and he will be here tomorrow (Thursday- Jan 15th)! Yippee! It's like Christmas all over again.
Last edited: Jan 15, 2009

I love the excitement of DD fish. I had one delivered saturday and one today and I can't even tell you how long I stared out the window like a little kid waiting on them to get delivered.

Good luck with yours!
J

Agree with above posts. I have had a blue spot for almost 2 years now and is one of my favorites. They have a great personality and mine has a burrow in the front so he can watch everything. As posted above you will need a deep sand bed with rubble and a tight fitting lid and make sure there is no way for him to get in your over flows either. I spot feed mine with a turkey baster to make sure he gets plenty to eat and he will generally jump up and bite at it. Hilarious. I have seen posts about cooler temps but I keep mine at 78-79 with no problems.

I am so happy to report the jawfish arrived safe and sound. Diver's Den really packs these fish carefully and the heating pack was still warm! He looked healthy and well nourished.

I took a picture of him in the bag as he was starting to acclimate. Its a good thing I did because as soon as he was in the tank, he disappeared behind a rock. For a couple of days all I would see is a puff of sand but no fish. 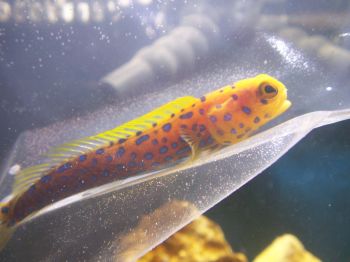 But several days later, curiosity has gotten the better of him and he is moving around and viewing his new world. 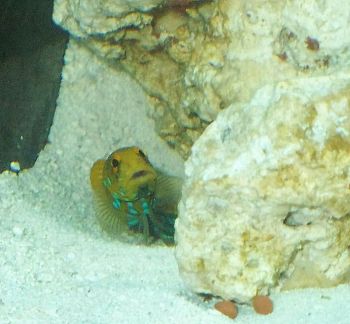 Now he is coming to the front of the tank and as long as you are quiet, he looks around. I think he may be watching my 90 gallon reef which is quite close.

I absolutely love how they turn their heads to watch you. It cracks me up every time. They really have so much character.
A

Premium Member
They are gorgeous and I want a blue spot but I dont know if I could feed it 3 times a day or more.
Does anyone use an automatic feeder for these guys ?

I don't fed my tanks three times a day. I feed once in the morning and usually a small snack in the evening. I do however have a well-stocked refugium with a lot of biodiversity which puts out copepods. I also feed some live foods and frozen foods 3-4 times a week (morning fed). I think the more important issue on feeding is getting some food close to their hole (like maybe 6 inches) because they tend to stay close to their hole.

Premium Member
I have one I got at Diver's Den last December and it is an awesome fish. It is doing great. It set up house right in the front of my 34 gal and always puts on a cute show.

Good luck with yours!

One of my favorites--can't believe he fit through the egg crate one day though--but he did!

that sucker use to eat from the end of a turkey baster for me. I had to do that or the tangs ate the food before he got any.

I got a bullseye jawfish 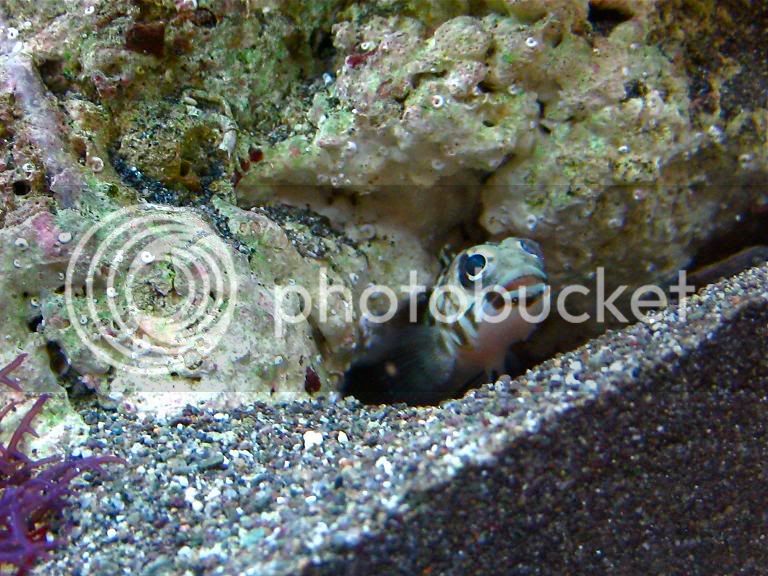 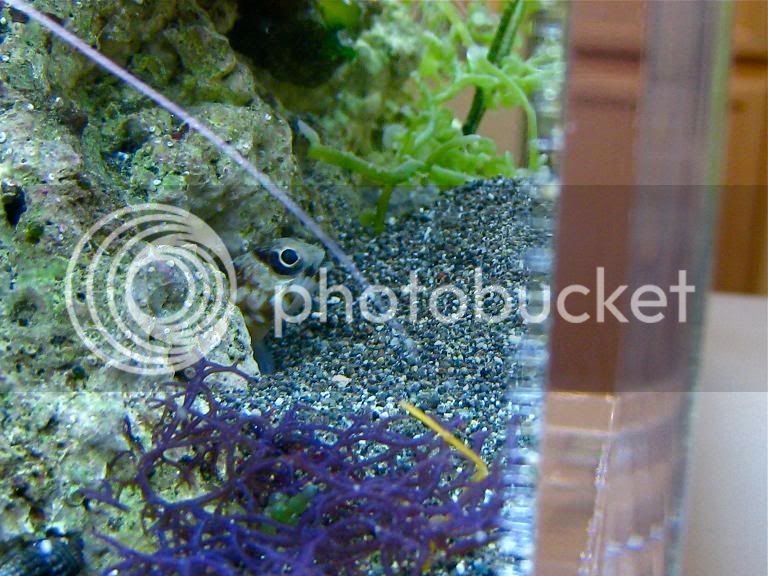 it hates it when others come near his burrow but he's been playing nice. Eats like a champ and loves mysis.

Your Bullseye Jawfish is pretty neat! Love their personality. With those BIG EYES they are SO adorable!

My blue-spot just moved to the front of the tank and is building a new nest there. I guess he feels safer now. (I am still anxiously checking the cover to make sure it is always covering the top of the tank- I don't want a mummified carpet-surfing jaw fish.)

Congrats on your jawfish! If you haven't noticed it already, they have a ton of personality! I have a bluespot, I named him Digger, for a year now. I feed him mysis shrimp and brine. He will also eat flake food!

Give them plenty of live rock rubble. The more they have, the better they like it. It won't be long before they build an intricate tunnel system.

Here's a pic of Digger: