My Reef Brites showed up the other day, I was playing with them last nite and my wife took interest in how great the looked on the tank. At one point she asked: how much were those? I responded with: you don't want to know. To which she said: OK"¦"¦ and went back about her business....(she is wonderful)


I love the way my Geismann spectra looks over the tank. The tank is in our foyer it's the first thing you see when you enter our house and it needs to looks spot on, which it does. I really like that fixture but wanted LED POP. I had been using E5 LED t5 retrofits from the now defunct Euroquatics. A few weeks ago one of those lamps just about caught fire and melted the lens (photos forthcoming)

I decided in leu of just going back to MH/T5 to yank the T5 reflectors and ballasts and install LED strip lights, which turned out to be Reef Brite. I will be installing them this weekend

Overall design is nice and the finish is nice

Not real happy with the final assembly, a few of the screws look like they had been cammed over. The sheathing on the power wire wasn't quite gripped in the strain relief, I'll fix these things when I do my retrofit but I shouldn't have to for that much money.

My APEX classic is out of 0-10V ports but I do have an old AquaSurf that I can derive my 0-10V APEX control from.

I got the world's best Father's Day helper 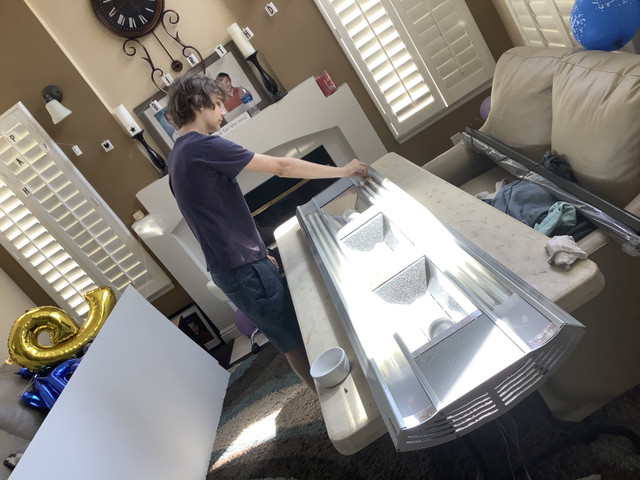 My apologies to anyone who I recommended the Euroquatics LED T5 lamps to, this thing melted bad! 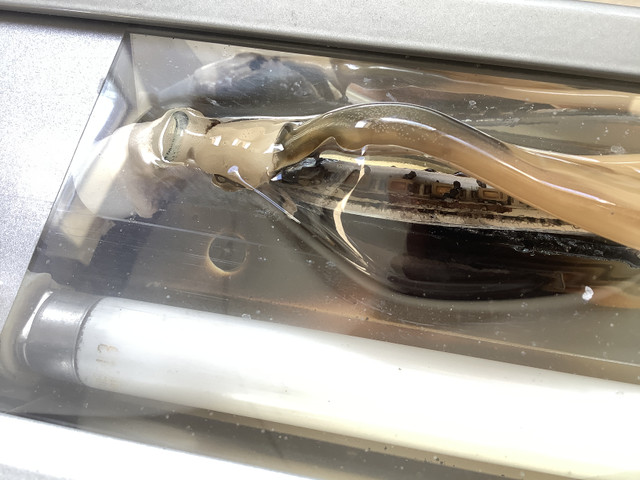 We had to cut it out with a Dremal 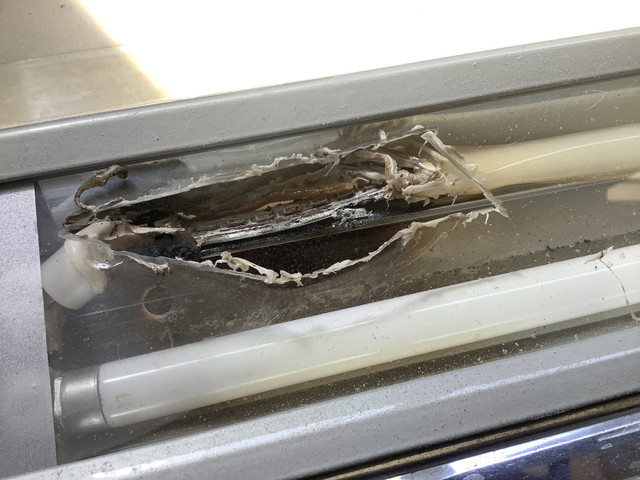 Finally got the lens out, look at the damage! I'm just glad we didn't have a fire. 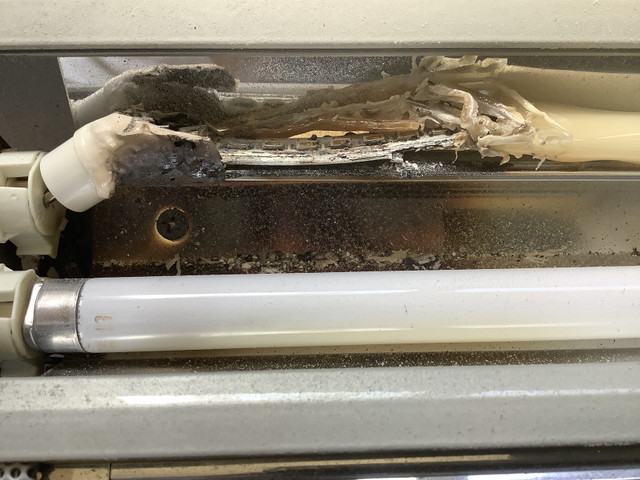 Premium Member
The Giesmann fixtures are expensive but they are built incredibly well. This fixture is probably 13 years old and is still in very good shape. The materials quality and craftsmanship and attention to detail are superb. The one design shortcoming is that the T5 ballasts are silicones into the fixture which proved difficult to remove without damaging the fixture and there are 4 of them 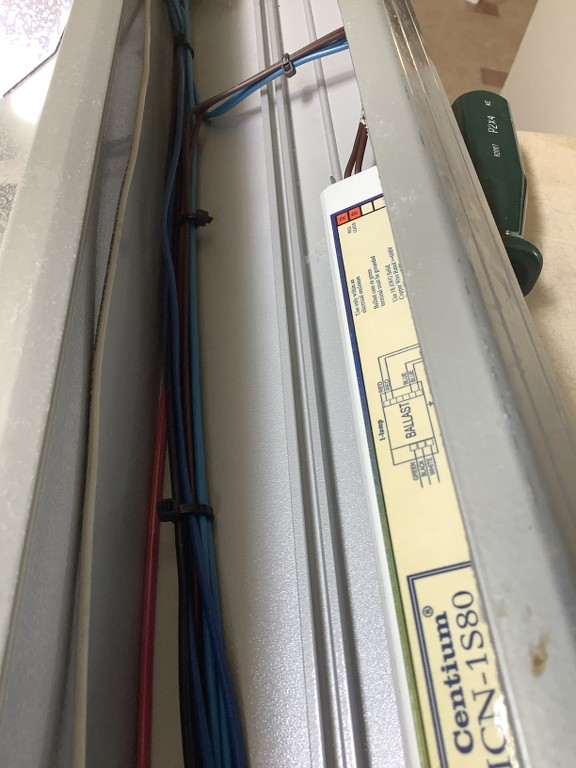 Almost done, I need some paint to dry before I put it all back together. One of the vent panels had some rust so I put it in the blast box, stripped it down to bare metal primed and painted it white. I only had white. I cut the melted lens into 4 each 7" sections and painted them white to conceal the wiring and ugliness at the ends, should be another 1/2 hr before they are dry enough to handle. 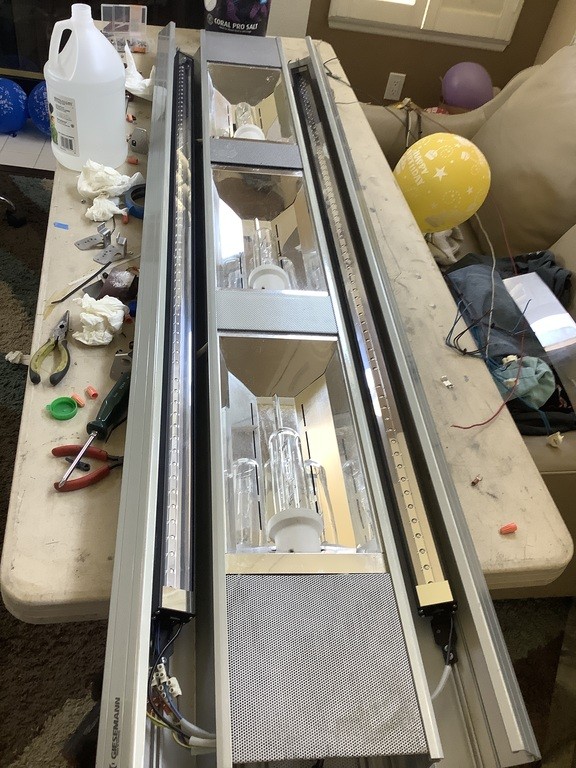 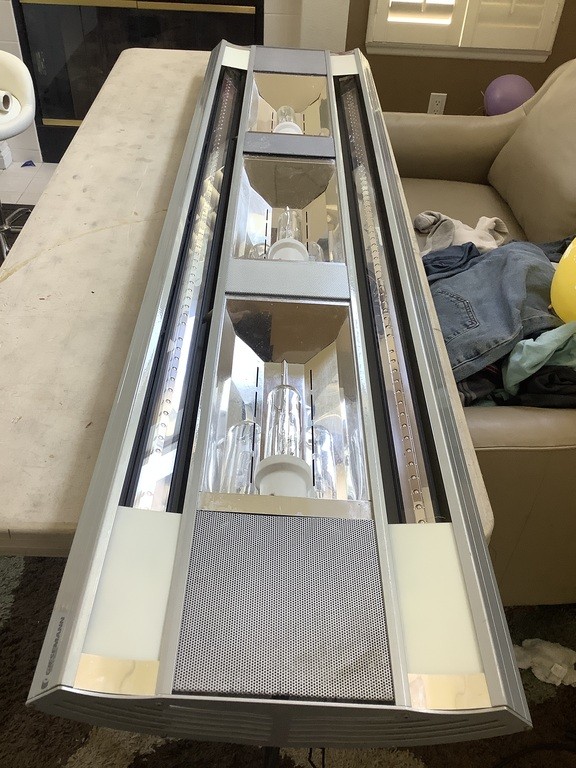 The only issue is that I couldn't get the aqua surf to predictably dim the lights. I could get them on sometimes, dim to about 20% sometimes and to flicker most times. I tried using ramp command and profile and then I tried using tables. I don't know if my aqua surf is defective or if I got a miswired APEX adapter but the only way I got a full 10V was from one lead from channel 1 ad another lead from channel 2. I hope I don't need to buy a VDM although it would be less adapters and less cables and forward compatible if I ever upgrade my classic.
You must log in or register to reply here.