Hi, I picked up a nice favia sp. about a month ago. Its green on the inside with brown ridges. All during last week we had a heat spell, and even with me floating bags of ice and running fans my tanks temp still skyrocketed, with potential temp swings of 4 degrees... Also in the past few weeks while getting my auto top off straightened out I had some fluctuating Sg, but it was always corrected slowly

Anyways, since then I have noticed what appears to be bleaching on some of the brown ridges. Just in case its not the temps, I'll go ahead and post my other specs:

The favia came from the store with one tiny spot of bleaching, i just assumed it was due to the 400w halides they were running.

All other corals are doing fine except for a turbinaria "pagoda cup" which is not extending polyps in one stretch where it might have fallen during some minor rearranging.

I am definitely new to coral, so hopefully someone can help me with this. I can add pictures later if needed.

Premium Member
Pictures would be a big help.
if it has a maze-type pattern it's probably a Platygyra-- those guys are notoriously finicky. They tend to suffer from tissue recession more than bleaching. Is it losing pigmentation (bleaching) or is the actual skeleton showing (recession)?

Either way, try moving it into a shadier spot with slightly reduced flow for a few weeks and see if it improves.

Team RC
I personally prefer alkalinity around 9 but the rest of your numbers look good. Again, I agree with seapug.

I didn't think my lighting would be enough to require corals in shady spots, but I will definitely try it. I will get a picture up tonight, but the polyps are closed, not meandering like a platygyra.

Also, can someone show me the difference between tissue recession and bleaching?

Premium Member
Bleaching leaves the tissue in place, just loses pigmentation. Recession involves the peeling away of the tissue from the skeleton. Bleached corals can look like they have no tissue but if you look close you'll see they do. Recession will leave bare skeleton and is much easier to spot while it's happening-- it looks like the coral is dissolving.
Goes without saying that recession is a much more serious condition than bleaching.

Here are some pictures (I even got to whip out my fancy extension tube/macro lens). I sure hope this helps, because my freakin clownfish attacked me when I stuck my hand in there to move the coral to a shadier area... 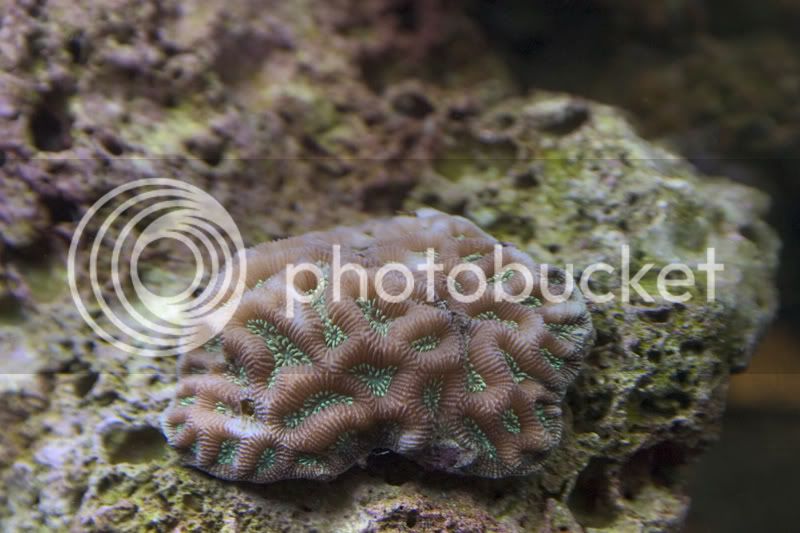 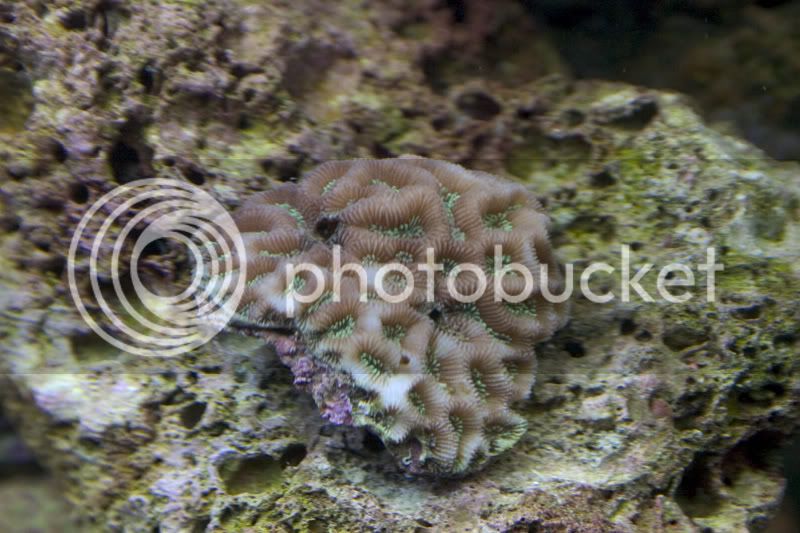 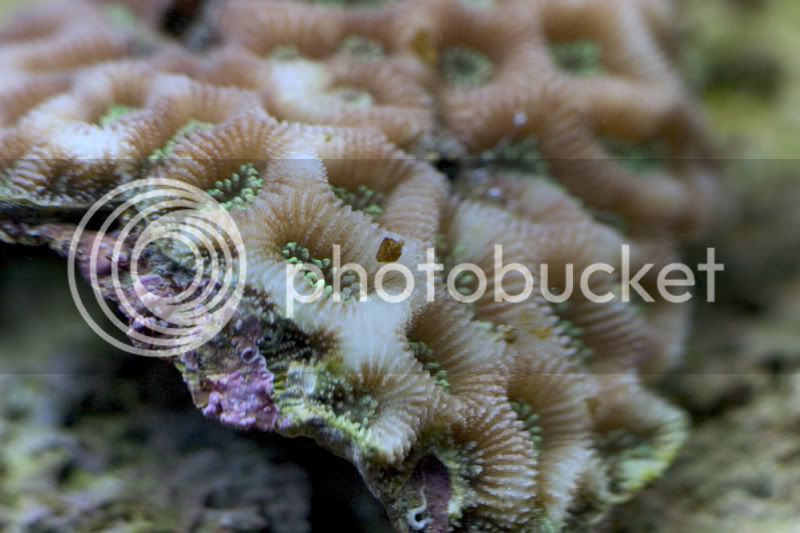 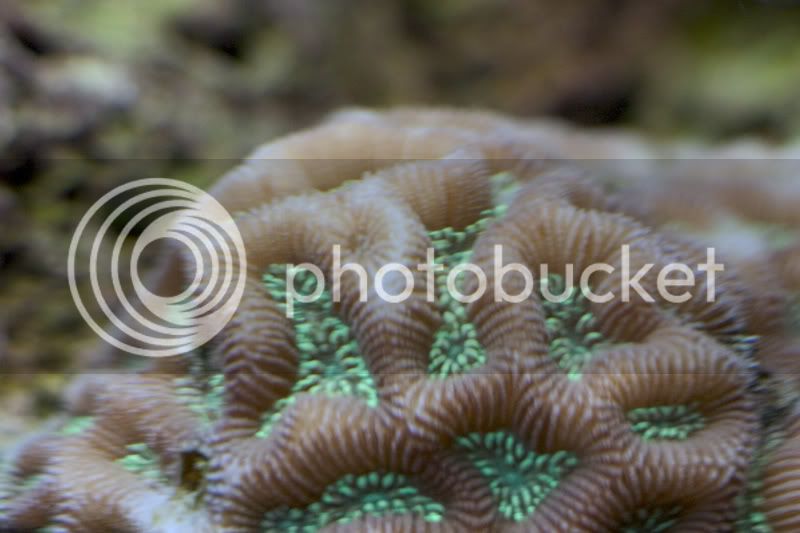 Team RC
What was that coral near before you moved it? How far from lighting?

Can stinging cause bleaching? I've never heard of that....

Premium Member
Those look like dead or dying spots in my opinion.Bleaching would involve the expulsion of zooxanthelae and a more uniform color change would result. The original dot you thought was bleaching was probably an infected spot. The best you can do is to use a lugol's dip or a more aggressive and risky freshwater dip and hope for the best.It mght be a protozoan infestation .If you see a brown jelly like substance at some point, remove the coral since the" brown jelly" protozoan infection can spread to other specimens as it blows around the tank.

I am getting so many conflicting ideas, has someone owned a favia and had this exact thing happen to it? More importantly, this is a favia, right?

Premium Member
It is a favid. Can't really tell from the picture if it is a favia or perhaps an oulophylia or playgyra. I would guess favia. It is dying from an infection in my opinion and it may be too late to do much about it. . Yes I have them and have seen it happen.

Well, even though its bad news thank you for helping me out. Can you give me a good link to read up about freshwater or lugols dips?

Premium Member
Don't have a link but here's a paraphrase of what Eric Borneman says in his boodk Aquarium Corals:
Fresh water dip 1 to three minutes in fresh water (dechlorinated and adjusted for temperature and ph to match the tank).Xenia and sps will not tolerate fresh water dips. Most other corals will but should be removed if they appear to be shedding zooxanthelae.

Lugol's dip 40 drops per gallon of tank water: dip for 15 to 20 minutes , Well tolerated i my experience but not always as effective against the pathenogen as the freshwater dip.

I just read something somewhere about "gall crabs" that can live inside corals. There is a little hole in my favia and I know for a fact that my pavona has a little crab living inside him. Are these guys bad or potentially the culprit?

By the way tmz, I have seen a bunch of your posts and have a lot of respect for everyone that helps out on the newbie thread, so please don't think less of me that I keep bumping this asking for more oppinions.

I've already moved the guy to the sandbed and whill wait awhile to see how he clears up, I just don't want to do anything drastic without a lot of opinions/research...

Premium Member
I doubt a gall crab is the culprit. A crab of some sort or other predator may have caused injury leading to infection. Or it could have been hurt in the shipping bag or stung. At this point it looks like infection not predation.Again it's hard to really be sure from th picture.

Is there something I can give you guys to help out? How safe are freshwater dips with favids, should I just try it?

Premium Member
Don't know how it will react. Most lps can tolerate them. I dipped one and it died anyway within a few days. I have also had corals stop receding after a freshwater dip. It will stress the coral but you are hoping it will kill the infection. Glad you are getting as many opinions as you can. That's the way to learn and develop your own approach. Good for you.
You must log in or register to reply here.