I was wondering if any owner operators of dedicated NPS tanks have had success keeping these worms alive long term? It would seem logical that if you could keep NPS gorgs, sea fans etc and have perfected plankton feeding methods, these worms might be able to succeed long(er) term than the average stony coral aquarium.

It would be great to hear about any efforts you made and if you could keep these animals. TIA. If so, can you tell me about lifespans under good conditions?
N

coco worms and feather dusters are fairly easy in all tanks. In a SPS tank you may have to do some supplementary phyto feeding.

I have 4 of these animals for over a year. I move them back and forth between a main display and a nano. I have only ever lost one of these animals and that was due to it being buried in the sand.

same for me. i've had a couple of feather dusters in my 14g for over a year. i have a few in my 29g along with a gorgeous coco worm brought to me a few weeks ago by johnike.

if/when you buy, just make sure you see the crown. i was looking at a feather duster once and asked if there was a worm in the tube. the guy pinched it and said he felt "movement". i spent over an hour in the store and never did see a crown so i didn't buy!

i did have one leave its tube and i thought it was a goner but found it several weeks later. it had formed a new tube.

Thanks for posting your experiences. I got about 12 - 18 months out of a duo of coco worms, less for the large common feather dusters. This was in a sucessful well fed tank. I did target feed once or twice a week as well. Flow is good & LPS + SPS thrive.

I have read many accounts saying that long term success was spotty and the proper size & type of food was the key factor. So I have always assumed mine slowly starved...that's why I assumed a heavily fed NPS tank might be ideal.

I'd like to try again but there are limits to the amount of planktonic food I can feed without skunking this mixed tank. But id like to have a solid plan in place first.

Is live phyto the key or is the freeze dried worthwhile? I feed a variety of zooplankton products for gonis, trumpets, dendros & suns. Glad some have had success. Can anyone confirm what these things really eat...size of foods or specific products? Phyto, zoo plankton or both...or perhaps more elemental foods? Really specific info is hard to come by. Thanks.

My History with Feather Dusters

My History with Feather Dusters

I am re-starting my tank and want to have lots of feather dusters of different kinds. I can speak to Coco worms but I hope that their requirements are the same as the hitch hikers that I have had in the past. If so, they will be easy to keep in my set up. 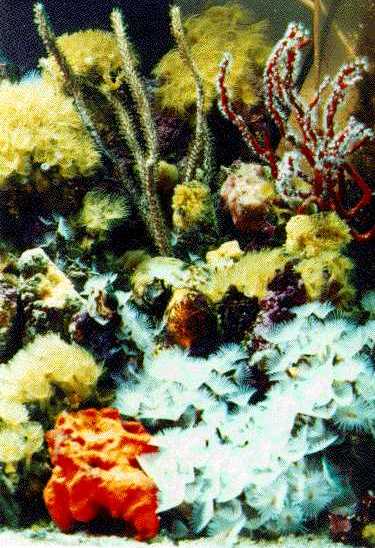 In my first tank back in the 90's, I moved a rock and found a cluster of the ones shown in the picture. I was feeding powdered food which is cheap. I added powder to the water stream to get at everything including feather dusters. It was also easy to spot feed them by taking a pinch and sprinkling it into the heads. They are not picky at all and the colony grew.

In my second tank, that started after I relocated, I had some that came in on a rock that were small and had a white head but a greyish tube. I wasn’t adding lots of corals but I was feeding heavily. They must have spawned because in a few months, they were everywhere. When they reached a saturation point, they probably spawned often….I guess.

I liked them but my wife didn’t like the grey tubes all over the rock, especially without any corals to hide them. The heads didn’t poke out in-between the corals and the tubes got hard to overlook.

I eventually scraped almost all of them off of the rock like a pest and started stocking the tank with fish and corals while continuing the feeding. The remaining feather dusters didn’t’ come back again like a pest but remain very hardy for years.

Then I went on vacation and my tank crashed, because of a faulty auto-top off setting. Every single thing in the tank died except for one of those feather dusters.

So … If the prettier ones are like the wild ones, then they are easy to feed. Does anyone know if well fed Coco worms reproduce the same way that these wild ones do? I will be restarting my tank with them.

Thanks for the information. I have lots of the small hitch hiking feather dusters too and I've wondered why they succeed and grow while I can't keep the large feather dusters or cocos for extended periods of time. I assumed food was the limiting factor somehow. And maybe flow patterns were another factor as its the food delivery system. I have all kinds of pump options at my disposal but never figured out if a strong flow location or a sheltered area was best. Also I have never been able to confirm conclusively is they're actually phyto or zooplankton eaters (or both), and what size plankton & brands work.

That's why I figured they might do well in a really well fed NPS aquarium that had low powered or rarely used lighting to keep algae at bay. It could also be interesting if such an NPS could support other difficult to feed filter feeders like flame & electric flame scallops.
M

Coco worms (Protula bispiralis) and other large feather dusters (Sabellastarte spec.) are different to the regular hichhikers. Protula likes strong current and high light! The others don't. Overall, feather dusters prefere calm laminar flow except as mentioned the Protula familiy. When it comes to food, there is a wide spread misunderstanding. It is actually not possible to target feed feather dusters. They are permanent filter feeder organisms like sponges and are not able to profit from short term high volume food situations. The best way to keep them healthy is to have enough detritus in your tank, as this is, at least in our tanks the main food source. Overskimming is contratictionary to the care of feather dusters! Using NP-reducing pellets did increase the growth of my feather dusters significantly.
I have a Protula bispiralis and a Sabelastarte magnifica in my tank since more than one year and they are both growing tremendously.

That is some good information. Thanks

Detritus? That makes sense. Should we blow it out of the sand, back into the water column periodically so as to feed the feather dusters?

I used to see powdered food particles land on a feather heads and watch them get slowly moved to the mouth. Does that not happen with the large brown feather dusters?
M

The feather dusters that build soft tubes use large food particles or anorganic particles that they capture and move to their mouth to build the tube. Only food particles with the right size will be swallowed and digested. So the fact that they move the food down to their mouth does not always mean that it will be swallowed. The best way to see whether your feather dusters feed or not is to observe if they release fecal pellets. Especially with the large ones, like Protula spec. this can be observed regularily. For the worms that build calceorus tubes, you have to make sure that there is enough calcium in the water. They require similar water parameters like SPS, also they are more tolerant to high nutrients.
Stirring the sand is a very common way to provide food for detritus feeding filter feeders. I do so every second day. The large feather dusters seem to need more food than the small ones, meaning, that the small ones are very likely to be happy with the normal food particles provided in an average reef tank. This might be a reason why the large ones are more difficult to keep over a longer time period. Another parameter that needs thorough planning is flow. With the exception of Protula spec and the Spiroblanchus species I put the large feather dusters in regions where they get low to moderate laminar flow. An ideal place to put them is around the backflow of the streams. The former do really like heavy and even turbulent flow. And last but not least, some fish tend to disturb the feather dusters by picking at them or even swimming over them. Every minute the worm has his crown in the tube is a minute lost for feeding. If this happens too often, the worms will need more energy to move in and out that they are able to capture and as a result, slowly starve to dead. The pro with fish in a tank is, that the feces of fish is an excellent food source for the feather dusters.
When it comes to powder food, I have a suspicion: I think, that most of that food is of no direct value for filter feeders. But if the food turns to detritus and is a coctail of bacteria, organic debris and unicellular organisms, it will be an excellent source of food. With phytoplankton, it might be the same. Most of the plankton species we are feeding to our tanks are not part of the natural food of the filter feeders in our tank.

Great post Marko thanks. Interesting about your suspicion regarding prepared food. I always knew that size was key but never knew what if anything actually worked. I had doubts that they were really eating despite war him the crown respond to target feeding.
S

I've read that too, years ago, that it might be the bacteria etc that feed them, and not the food directly.
R

I have been feeding my feather dusters reef bugs, gonopowder, cyclopeeze, and pyto on a rotational basis. I was wondering what everyone else is feeding. The reef bugs so far seems to be best response so far from what I can tell.
N

marcobo said:
the pro with fish in a tank is, that the feces of fish is an excellent food source for the feather dusters.
Cheers marco
Click to expand...

runyonh said:
I have been feeding my feather dusters reef bugs, gonopowder, cyclopeeze, and pyto on a rotational basis. I was wondering what everyone else is feeding. The reef bugs so far seems to be best response so far from what I can tell.
Click to expand...

Again, I had only wild feather dusters but the foods that I was using came from the same guy that makes Reef Bugs. I used the bugs, powdered squid, powdered phyto and some other powders that he put together for me as an experiment. They appeared to love it and thrived on them.
D

Interesting msnioer and others. I thought keeping them in a NPS tank would be beneficial. I didn't realize that those little volunteer hard tubed feather dusters would grow to a large size. They have never done this for me and the population that I see grows & shrinks in chcles over time.

How big do they get for you & how long does it take in your aquarium? I have many of these in my LPS SPS mixed tank but can't seem to keep the larger coco & fan worms long term. What kind of flow works for you?
You must log in or register to reply here.

Does anybody still use downdraft skimmers?