Well, I have read that Flagfin's dont make it that long.. so im not sure if Im catching the same symptons. I have had this flagfin for over a month or so and he has ate like a pig. Yesterday I noticed he didnt go after any of the food I usually feed. Today, the same reaction. He looks healthy from the outside. Anyone have any idea what could be happening or how to get him to eat again? He says hi..

ok.. well i tried again with live brine and he ate some. he must of had a bad belly ache or something

Premium Member
Nice picture. I love my flagfins. Only time I've had problems is the first couple of weeks after that they eat really well. One thing all my flagfins, and most of my fish, love to eat is Spectrum pellets (small, not big.) Here is feeding time. 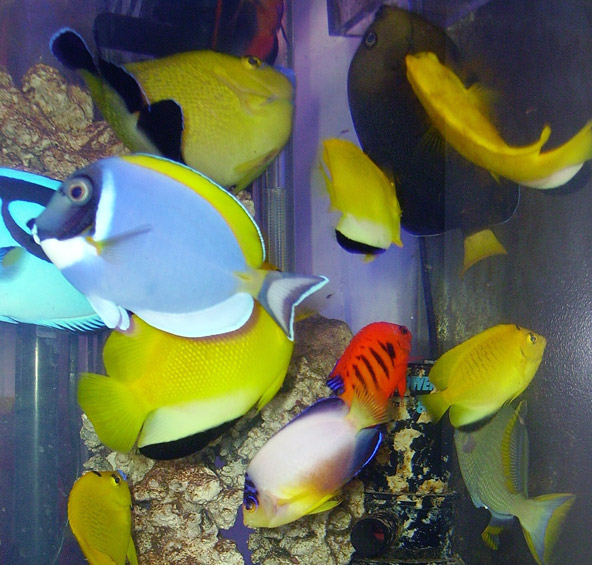 Premium Member
Thanks. I tried those pellets and almost all my fish ignore them. They also don't go for "S" Hikari, but they like "A" Hikari?

Thanks for the tips guys.. I will buy some today at an LFS.. if they stock them.

LargeAngels, you have 5 Flagfins? Do they fight? or did you introduce them together?

Premium Member
Yes, I have 5 flagfins. I had read that sometimes they could be found in groups. I had the little guy on the right since he was just over 1", then added a medium and medium/large. After that I introduced another medium and medium large. The 8" Goldflake was already there so he kinda kept the peace. No fighting whatsoever. Only a couple of flarings, but nothing to worry about. All of them were first put into a QT system and made sure they were eating really well. I think it is going on almost 1 year now that I have had them together.

Beautiful angels guys. LargeAngels, Do you have a FTS?
thanks

Well he's eating good again. I also purchased the spectrum like you said LargeAngels and he ate that as well. Thanks again.

Premium Member
No problem. I also sometimes soak the pellets in vita Chem or Selcon. There is something about Spectrum pellets that angels really like.

I totally agree, I have yet to have an angel turn its nose up at spectrum pellets. Even my fairy wrasses eventually learned to eat it and they wont touch any other prepared food unless it contains meaty seafoods. There also seems to be a lot of anecdotal evidence that spectrum will maintain some really hard to keep fish like regal and bandit angels, moorish idols, and other very picky eaters. My flagfin tore the spectrum up from day one.
You must log in or register to reply here.