I'm pretty sure these are whats causing all of my sps to kick the bucket. This is what i get for not dipping some coral of mine.

I found this thing in my sump as i was doing a waterchange.

That is like Mother of Mother of Flatworm. bad bad.

This thing is probably a little bigger than a 50 cent piece. It attached to me blind as i was retrieving frag plugs that fell in between my return and the filter pad on the mag pump. I read that these things can sting!?!?!?

I know if i have one i have more, how do i get rid of them? Flatworm exit?
M

from all the horror stories i've read. you gotta take all your sps out and qt them. dip each one every few days. leave your dt empty of sps for awhile to starve off the flatworms and lets eggs hatch then starve them also. sorry to hear...

too big to be aefw

yea... no way is that an AEFW. Polyclad Flatworm

maybe its a polyclad flat worm?

Whats great news? That its not AEFW? I don't have many sps thank god but i dont have a light for the time being powerful enough to keep the sps in qt. Should i still take out the sps or treat the dt with them?
M

do a google image search for polyclad flatworms. I found some that looks similar to your pic

Flatworm exit is primarily used for Planaria Flatworms - which this is not.

Coral RX dips (removing acros from display) are used for Acro Eating Flatworms - which this is not.

All I can advise is to manually remove the few that you find, and not to stress about it. Keep an eye on your clams (if you have any) and snails/hermits.

7duster3 said:
Whats great news? That its not AEFW? I don't have many sps thank god but i dont have a light for the time being powerful enough to keep the sps in qt. Should i still take out the sps or treat the dt with them?
Click to expand...

they're are lots of different flatworms and it so happens that you don't have the ones that strictly eat corals. Many flatworms are general scavengers and just eat what other snails do.

Yup, that is a polyclad flatworm..

Here's one in found in my tank quite a while ago: 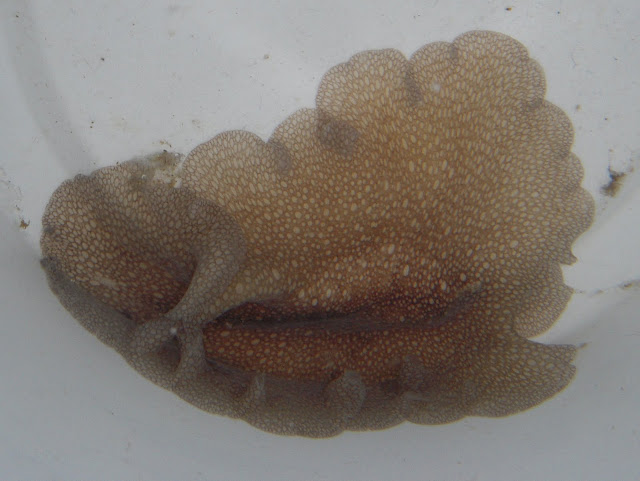 they are obligate predators of tridacna clams. If you look at the pattern it looks simiar to the spotting of many species of clams mantles.

They tend to come out once the flow has been off for a bit. Normally the respire with the water movement over their bodies, but when the flow in the tank is shut off they have to come out and move to keep water flowing over them to breathe.. Mine came out one night when i had my previous tank and the hob overflow had lost siphon and the tank was on the verge of overflowing. My wife called me and i told her to just shut down power to the return as i was due to be home from work shortly. Found it moving along the glass and sand.. I had a clam die unexpectedly about 2 weeks beforehand.

I recently found a "polyclad" flatworm too...

I just chucked the one I found, it was when I had my MP40's offline for cleaning and it showed up on the glass.

HMMM, so should i be worried of more? I dont have a clam at the moment but am on the lookout for a nice one. What should my next step be?
You must log in or register to reply here.

B
Help what is it and how do I get rid of it?