I'm thinking of breaking down the 16g bowfront, along w/my 40 breeder in order to make 1 bigger tank.

Anyways, i'm just trying to see what the interest would be in the 16g bowfront before i put it up for sale. Its still running right now and is a reef tank.

For sure i'll be selling the fish...there is 2 small perc clowns that have paired off. And i cant ever find him, but there was a tiny little yellow clown goby as well.

Corals...Mostly just softies, but i got a torch that has at least 1 big head...cant tell if its split into multiples or not yet, because is sort of in that "in-between stage" as far as splitting. Other corals are gsp, kenya, nicer button polyps, green zoas that are still on a disk, fuzzy shrooms, some nicer shrooms (purples, and a couple green) and prolly some others that i cant remember right now.

Not sure how much rock is in there...probably 25lbs or so. I will be taking one piece of that rock though..i'll post pics and describe which rock i plan to keep.

Other than that...3 or so inches of oolitic sand, an Aquaclear 70 HOB filter, and the lights are a 2x65w coralife aqualight with 2 moonlights that is 30 inches (tank is only 20 haha) so it doesnt fit the tank right But it works for what i grew. Had planned to get a small halide, but didnt get around to that.

Here's the latest pics i took...which were months ago, so i gotta get some new ones up if anyones interested. 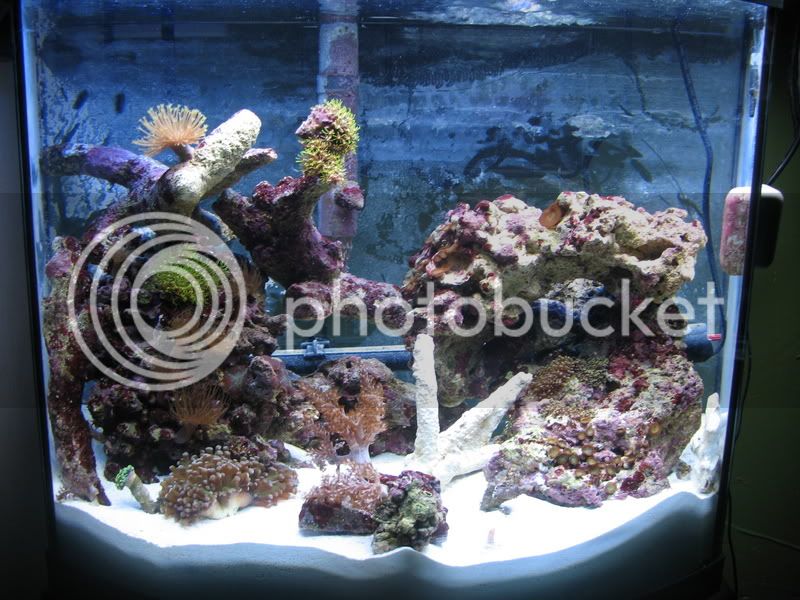 The rock i'm keeping is the big one on the left w/all the aptasia on it lol. And that seems to be the ONLY pic i got at the moment...None of the stand w/the tank.

Anyways, its got a black stand/cabinet that i can get pics of later if needed.

Premium Member
I can attest that this size 16g bowfront makes for an excellent nano--as I have one myself!

Mike--if you part out, and we could coordinate pick up, I'd be interested in the hammer and possibly a few other of the corals. Possibly the remaining rock you aren't taking (especially if it is free/mostly free of aptaisia.
S

that hammer is actually gone. And a correction to the first post...its that frogspawn, not the torch that i've still got...i had all 3 at once and i put them in separate tanks and just forgot...but the frogspawn opens up really big and has like 3 heads, almost 4.

Hey Mike how much do you want for the aptaisia? They are my favorite!!! LOL
S

lol, ya theres a couple big ones, but i dunno..i never really was bothered by them other than they're ugly...they didnt really take over much and were pretty easy for me to kill with just hot water...i just get lazy about it

Funny thing...they're only on the rock that i plan to keep
You must log in or register to reply here.

Anyone interested in a red sea bicinctus clown female?