Premium Member
4 years ago, I put in a nice leather rock, five 2” heads and a purple gorgonian.
Then I had the great idea of putting a 1” plug of GSP on the rock for coverage, I thought this would nice.
Wrong!

While the first year was fine, the last three they just fought each other, the leather growing taller to stay ahead of the spreading GSP, but in the end, neither every claimed victory, just two very sad softies. If they were happy and extended then great, but both stayed alive, but retracted.

They were one rock so both got the boot and rock replaced. Unfortunate but necessary.

So GSP remains OK for glass, but if going on a rock, make sure it has no neighbors you want to keep, AND, on its own rock. 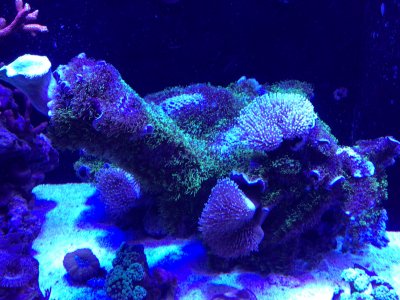 Premium Member
Your leathers are gorgeous.

I pulled out $100 of GSP rock that I traded to LFS. Green leather is hosting clowns

Subsea said:
Your leathers are gorgeous.

I pulled out $100 of GSP rock that I traded to LFS. Green leather is hosting clowns
Click to expand...

Wow, love those
You must log in or register to reply here.