Hair Algae, I Presume? Survived Bleach? What the Heck?

Two Weeks Ago: I had bryopsis algae on LR purchased from a LFS. The bryopsis algae showed up after only 4 days in a brand-new aquarium-setup. So I pulled the LR, bleached it, sunned it, and now that bleached rock sits in a covered vat of circulating R.O. water in my garage.

I scrubbed down the tank and installed new power heads, guaranteed not to have algae.

Next, I installed a lone piece of dead rock in the tank to see if it would sprout bryopsis algae. It did not. This particular piece of dead rock was not from the batch of LR that had a bryopsis-algae problem. Rather, it was from an older batch of LR that had hair-algae problems, about a year ago. This dead rock became dead in the same manner: it was bleached, power-washed, sunned, and stored the rock in a covered vat of R.O. water, with a circulating pump. The lone piece of dead rock should now have bacteria on it that is only two-weeks' old (i.e., the amount of time it has been sitting in my aquarium, becoming live rock again).

One Week Ago: Encouraged by the observation that no algae appeared to grow on the lone piece of dead rock, I added in more dead rock from the same batch from which the lone rock came. Thus, the bacteria on this second-wave of dead rock is only a week old.

Today: I noticed that long strands of some life form were growing on the lone piece of rock that is in process of becoming live rock, again. A few days ago, these strands were clear strands, and I hoped that they were not living algae, believing that it would need to be green, in order to be living algae. However, today these strands turned noticeably green. (See picture below.)

I presume that this is hair algae that was not killed by the bleach, or it is hair algae that quickly established itself--in under two weeks--perhaps from the zoa that populated the lone rock. The discs on which the zoas are affixed have small amounts of hair algae, from the LFS.

The picture below was taken less than an hour ago. Very depressing. Is this what I think it is, hair algae? Why is it so sparse and not "clumped," like traditional hair algae?

What to do? Pull the lone, infested rock, and kill it again? Leave it alone and let it cycle? Your advice would be most appreciated. 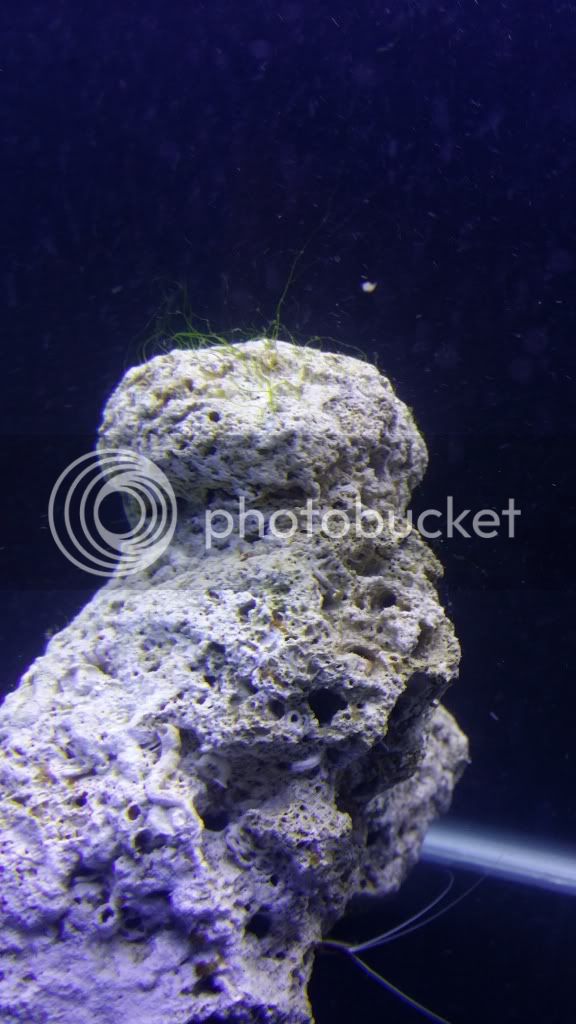 Leave it alone and let the tank cycle. You can't avoid pest algae species , you simply have to control them when they appear.

Misled said:
Leave it alone. You'll probably see a lot more before your cycle is done.
Click to expand...

dkeller_nc said:
Leave it alone and let the tank cycle. You can't avoid pest algae species , you simply have to control them when they appear.
Click to expand...

Thanks, Misled and DKeller. Of course, you're right. I can't keep starting the tank's cycling over and over again, and algae-control is the way of an aquarist's life.

Today, I got a brown tang, and it did an amazing job of mowing down the pictured algae--it is all gone in less than 1 hour of introducing the brown tang to my tank. I could not have picked the algae out more cleanly with my hand!

Finally, I would add that my waterfall algae-turf-scrubber ("ATS") is doing a fantastic job of exporting nutrients away from my tank, to help prevent the growth of nuisance algae in my display tank. Today I removed a full, double-sided screen's worth of rich, green algae that grew several inches long on the ATS screen in my sump. That was merely a week's worth of growth on the ATS screen, as I clean it off every week!

So overall, I am aggressively controlling nuisance algae in my aquarium.

Does the tip have a "fern" like structure? If yes then its bryopsis.
S

Why u even ask which type of algae is that. It will appear as long as there will be nutrients in water for it to grow. You cant just kill it without destroying tank.
I suggest you to open new poll with question how long your tang will live with options "under 1 week; 2 weeks; month" no more options needed

kevin32 said:
Does the tip have a "fern" like structure? If yes then its bryopsis.
Click to expand...

Hi, Kevin32. Thanks for your response. No, this time around the algae does not have a "feather" or "fern"-like structure. That was the structure of the other algae that sprouted on LR purchased from a LFS in 4 days after being introduced to my brand-new, start-up tank. Please recall that the entire batch from the LFS was removed and bleached, and it sits in a vat of circulating R.O. water in my garage. This batch of rock has a different kind of algae that look like stands of green, fake cellophane-grass, but very clearly, they have no feather or fern-like structure. I was very concerned about that and have studied the algae on this rock very keenly, to confirm this fact.

sh0ck said:
Why u even ask which type of algae is that. It will appear as long as there will be nutrients in water for it to grow. You cant just kill it without destroying tank.
I suggest you to open new poll with question how long your tang will live with options "under 1 week; 2 weeks; month" no more options needed
Click to expand...

Hi, Schock, thanks for your reply. In researching bryopsis, I saw that another aquarist reported that no matter how perfect his water quality was, the bryopsis would not go away, unlike other varieties of algae. As for killing the tank, that was the whole idea of this starter tank. It was brand new at the time, so killing the tank didn't matter. But now, I'm just working through it by controlling nutrients going in (I always use R.O. water) and going out (exporting nutrients via a waterfall algae turf scrubber + having grazing fish).
You must log in or register to reply here.

R
Hair algae in my Chaeto?

Jan 1, 2022
Kaioken
K
A
Biocube: how can I change background color safely?