Do I leave it in or pull it? I just start to change today. I think I read somewhere that it can cloud your tank and cause problems. True? Any advice would be appreciated.

Premium Member
I have some patches of Halimeda in my tank. It's very easy to manage, and I honestly haven't heard of it going sexual. Caulerpa is the one that typically people warn about going sexual. I'll leave the confirmation to the experts though.
K

<a href=showthread.php?s=&postid=11654798#post11654798 target=_blank>Originally posted</a> by RokleM
I have some patches of Halimeda in my tank. It's very easy to manage, and I honestly haven't heard of it going sexual. Caulerpa is the one that typically people warn about going sexual. I'll leave the confirmation to the experts though.
Click to expand... 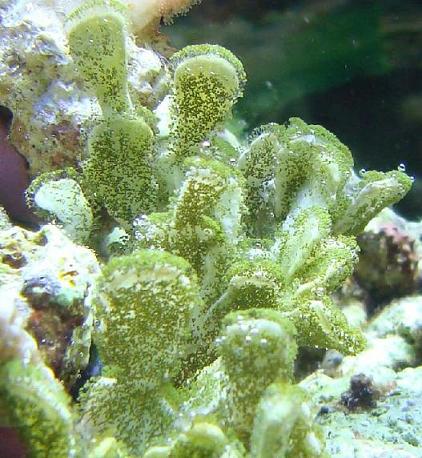 What does going sexual and asexual actually mean? I never caught on to these terms...

i had one too (i have another now) in a 30 gal....its going sexual, but it wont harm your tank....
it is breaking down primarly due to low calcium and/or poor light and/or possibly nitrates.....

mine did this and no fish were harmed or even stressed (i use a refugium and no protein skimmer, but i do run carbon).....i think mine was a calcium issue......

in the wild, these break down like this alot and contribute argonite to the sandbed, which is what this one is doing.....

im giving it another go, with calcium levels >450, if it does this again i wont be buying it again....

so no worries for you

do run carbon though.......
here is an article that makes more of a deal about it...
http://reefkeeping.com/issues/2007-01/sl/index.php
Green macroalgae, however, will show warning signs of impending sporulation, or sexual, events. Both Halimeda and Caulerpa bleach slightly and show several hundred tiny green dots on their surface just prior to releasing their spores (see photo-right). Any algae suddenly covered in these spots should be quickly removed from the tank.

Sporulation events can be disastrous in reef systems because the spores are released along with all the cellular contents of the alga. These contents break down in the aquarium and can overload the biofilter causing dangerous spikes in ammonia, nitrite, nitrate and phosphate levels. The break down of all these organics can also strip the water of oxygen.

Additionally, several genera of macroalgae contain toxic compounds meant to discourage herbivores from consuming them, including the toxin caulerpenyne found in Caulerpa. A few other species contain antibiofouling toxins that discourage larval invertebrates and spores of other macroalga from settling on their frond surfaces. While there are no studies that reveal the toxicity of these compounds to fish and invertebrates in aquarium environments, it may be prudent to attempt to clear them from the water rather than risk poisoning tank inhabitants.

If the macroalga succeeds in releasing spores into the tank, the damage to the system can be minimized by acting quickly. Use prepared make-up water to do several small water changes in the system in the days immediately following the event to help clear decomposing tissue and spores from the water. Run carbon in filters and pay attention to the protein skimmer to ensure that the system is adequately filtered. Additionally, consider additional aeration as insurance for the fish and other inhabitants.
You must log in or register to reply here.