How many people just have a skimmer and just rely on water changes?

My new sps tank will be setup this way. It will be a 40 gallon breeder with a 30 gallon sump. A large skimmer, plenty of live rock, shrimp, and maybe a fish. With a low bio-load, and frequent water changes i dont see a problem. I dont have time or experience to deal with reactors and such. Any advice?

Premium Member
I've been using this method for years. Using a high quality salt is key; IO isn't going to cut it.
P

Me - like old salty for a few years. Water movement and a HOB skimmer. Weekly or bi-monthly water changes of around 10 to 15 gallons.

people should not infer from your post that IO is not a high quality salt- it is. IO does need some tweaking to bring certain levels up to what is generally recommended in a reef aquarium.
I'd be interested in hearing what salt you use, old salty.

IME most commercial salt brands need a boost of calcium or alkalinity or magnesium.

<a href=showthread.php?s=&postid=11625201#post11625201 target=_blank>Originally posted</a> by 84chris
My new sps tank will be setup this way. It will be a 40 gallon breeder with a 30 gallon sump. A large skimmer, plenty of live rock, shrimp, and maybe a fish. With a low bio-load, and frequent water changes i dont see a problem. I dont have time or experience to deal with reactors and such. Any advice?
Click to expand...

something is bugging me with this post.
Corals are part of the bio load and (more importantly) the part of the bio load that places demand on calcium and alkalinity.
The main problem I see with "your idea" is that Ca and alkalinity will drop between water changes. If you have a lot of rapidly growing stony corals you might run into problems.
Another thing- calcium reactors are much easier to deal with than water changes. You're comparing automation with manual labor.
With a small aquarium you might be fine with just water changes, but if you own a large reef aquarium with few fishes and lots of stony corals you'd be foolish to rely on just water changes {IMO}.
Have you priced out saltmix lately?
Other methods of Ca/alk supplementation can quickly pay for themselves.

Well i use reef pro salt which i am REALLY happy with actually if anyone cares. I understand that the corals are part of the bio-load and will use up calcium and such. I have a large reef and i am very happy with the fish i have and coral growth. This tank might have a one fish thats all. Eventually i will consider adding atleast a calcium reactor. I really just want to know if i can get some growth without? Remember though i will do frequent water changes.
8

Also, thanks Gary for the article, I definitely think i could put together a dosing system in the future!
H

i agree with gary. i've seen people try to do this and have it backfire. on large tanks it may be ok for a while but once the alkalinity is depleted there will be serious problems if the alk stays that low. large salt water changes won't keep up with the demands in a largely populated sps tank unless your salt has ridiculous amounts of calcium and alk.

Premium Member
Allow me to rephrase:


If you want to rely solely on water changes, you would be better off using a salt that contains a higher amount of calcium than you plan to keep your tank at. This goes with other parameters as well; I'm just using calcium as an example. In other words, if you want to keep your calcium at 400ppm, you should choose a salt that mixes higher than that (ie: 450ppm).

I use Marine Environment 2 part. I'm not touting one brand over another; just that if one was going to rely solely on water changes in order to maintain reef parameters, IO isn't going to work.

Team RC
understood. Just wanted to make sure others did. Thanks.
A

Premium Member
Me, kind of.

Of note: I use Natural Seawater.
F

Adding homemade two part is fairly easy and inexpensive to do.

Personally, I use IO and add some CaCl (DOW Flake) to 450ppm and MgCl (MAG Pellets) to 1400ppm. Relatively inexpensive salt and supplements.

i use I O but ihave a calcium reactor...before i got the reactor my levels of cal and alk were always changing....i do weekly w/c and drip kalwasser and have a knop reactor.. so everything is stable....try what you want just keep notes and a close eye!!!!!!!!! good luck///////////

you guys are saying IO (Instant Ocean), do you really mean Reef Crystals by IO? They have a base brand called IO that is for fish only - do i have this right?
C

Premium Member
I use Oceanic salt because of the high calcium content and Reef buffer for Alk w. frequent water changes BUT that tank only has lots of rock, softies and fish.

no they are talking about Instant Ocean. it is not for fish only. I know lots of people who use it in the reef tanks. Reef crystals has a higher calcium level than IO, but some prefer to boost the Ca them selves through different methods of dosing. If you have a high Ca demand and you are going to have to dose the tank any ways, it is cheaper to use IO as well.

Tropic Marin for me. IO and Oceanic in my past experiences caused unusual spikes in phosphates. But Im no chemist so I only go with what seems stable by testing with cheap lfs test kits.
L

My digita grows rapidly, so does its frags. And my clam has great new growth.
N

i dont understand why the immediate assumptionwas made that the tank would rely on a skimmer and whater changes only with no dosing?

the tank would easily be mantined if regular testing and dosing is performed.

of course a sump and a calcium reactor and all those other goodies make life easier but it also cost a lot more..


running with out a sump is a pain though with evaporation.

this thread shouldn't be in the sps forum.

maybe the softies, lps, or even nano sps...

but keeping sps successfully with only a skimmer and water change is a pipe dream.

just throw away all your test kits hah hah.

I use only a skimmer, water changes, bionic and kalk in this tank. No refugium/wetdry or anything else. 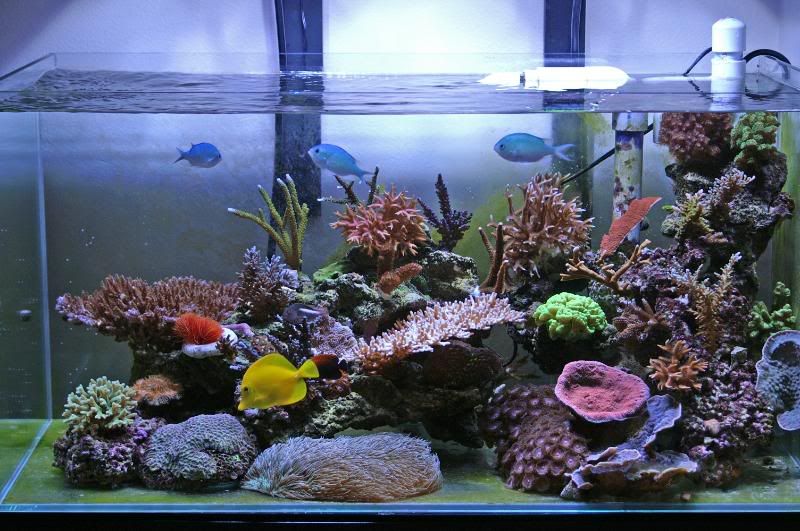 Thinking about a Refugium and could use your advice