Hydroids or feather dusters????? Pics inside

Well on a couple pieces of my live rock I have something that I don't really care for that I would like to get rid of unless they prove to be reef safe.

I have seen Aiptasia in other tanks before and had one in mine and these by no means look ANYTHING like it. They look like tight groups of feather dusters but at the same time they are a bit different. The color is just as it is in the pictures, a redish brown. These are the best pictures I can get for now so hopefully someone can give me a positive I.D. on them now.

In this picture they are pretty much centered in the picture, one of the groups I have on that rock.

Second picture there is a tight group in the upper right and a couple scattered groups throughout.

The third groups is next to a group of my Zoas so you can get an idea of the size. My Zoa heads are smaller than a dime. There are several groups in the picture but they will only look like small brown fuzz.

They are very tiny, which is the reason the pictures aren't the greatest.

Seconds part of the question is if they are harmful, short of pulling the rock what are the methods of removing them? The two pices of rock they are on happen to be the nicest ones in the tank.

I got rid of mine with good 'ol kalk paste. Then I removed the tubes with tweezers.

any natural predators for these?
B

I had something that looked just like it that I never could get an ID for.

My yellow tang ate whatever it was.

Premium Member
They are athecate hydroids and can take over. I'd kalk them. 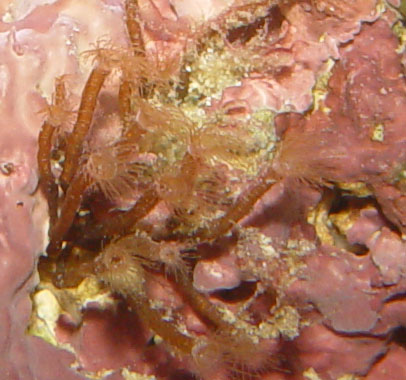 you heard the woman. give 'em the kalk!
omg i cant believe im posting that:lol:
please dont kick me off RC!

ok, school the idiot (me) on Kalk and what you guys/girls are talking about....a link would be fine too.

Kalkwasser AKA Calcium Hydroxide AKA limewater. You can get the stuff made for reef tanks

or get the same thing way cheaper at the grocery store. Its called Mrs Wages Pickling lime.

To make a kalk paste just mix a little bit of RO water with the powder and spread it on the hydroids. A syringe works best for this.

Premium Member
And a turkey injector has a larger needle so you make it thicker.

Or you could take a turkey baster and some boiling water and nuke em that would work too.

now this doesn't get into the tank water and hurt any of the other live stock? what about the hydroids that I don't see?

I agree that they are hydriods, but I have had some on a rock for over 2 years and they have not hurt anything.
You must log in or register to reply here.