Hello to everybody at ReefCentral!

I'm new to the forum, although I've been appreciating it as a bystander for some time. So I just wanted to say hello and introduce my tank. Always happy to hear others' thoughts and make new connections, especially anyone in the SoCal area!

First a little background - my first tank was a 40G "reef" set up when I was 16. It wasn't a total failure but it wasn't a total success. You know how it is when you're 16... water changes took a back seat to other things... :lol2:

Flash forward about 17 years and I've set up my second tank, also about 40G and also a "reef." Using quotes here bc it has almost no coral in it and is only 8 months old. However this system was set up after 6 months of research and has a lot more security and tech than what we had back in 2005. More on the tech stuff later... it's not what got me into the hobby.

The goal with this system was to create an Indonesian biotope, focused around a mated pair of Black Saddlebacks common to the Lembeh Strait near the northern tip of the country. As you may know, the Saddlebacks typically inhabit grassy flatlands or open sand patches but I cheated a bit in order to create a more dynamic tank with some shelter and added rock. A local vendor hooked me up with some dried out stag horn coral and other bits, and I was able to make a structure similar to the branch rock I've always loved the look of. 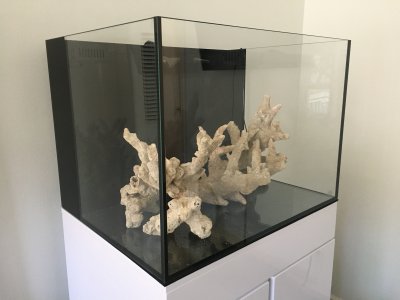 Flash forward a few months and the tank was cycled and stable. Got lucky and found a young pair of ORA Black Saddlebacks at my LFS... didn't even mention it... crazy lucky. 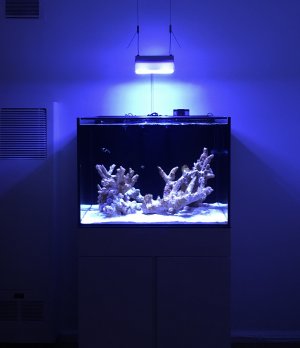 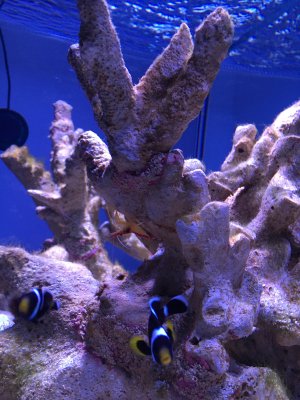 Can't say enough about Saddlebacks. Their bobbing movement and somewhat delicate nature just totally mesmerizes me. The female (pictured bottom center in the above right photo) was just amazing, the definition of graceful. But unfortunately, after 4 months of growth and perfect health, she mysteriously died overnight with no signs of stress or symptoms of parasites, except a tiny bit of red inflammation inside one gill (which I only noticed after removing her that day). I took a wait and see approach and did nothing but watch the male closely for a few weeks. Happy to say it's now been several months and I haven't had any issues with him except needing to treat for internal parasites very recently (white stringy poop). He's now almost as large as she was.

Now the crazy part that I'm sure many of you have run into -- replacing a lost fish and attempting to make a new bonded pair.

Sounds easy enough but it turns out the Black Saddlebacks have become really hard to find. No local vendor has them or will order them at the moment and after a month of searching high and low, I just today found a bonded pair at a Petco (mind blown) that is 1) amazingly beautiful, 2) too lovely to separate and 3) ENORMOUS (pictured below left - the photos are almost scale to size difference!). 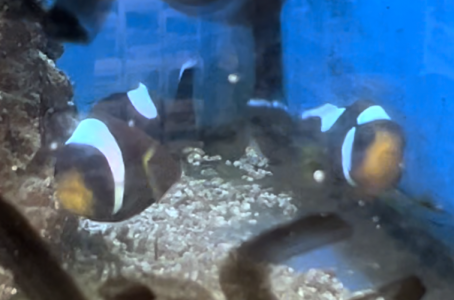 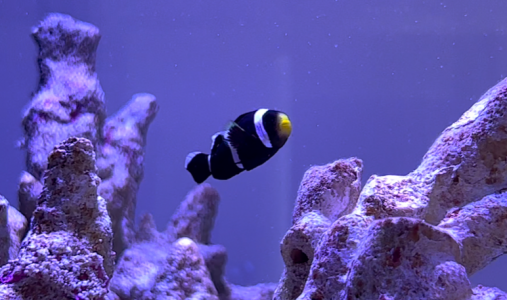 But even more it's just an issue of my little guy (pictured above right) who thinks the tank is his versus a fish 4x his size who wants to dominate him. That and not being 100% sure my guy is still a guy, although I'm with the 50% of folks who think the change needs to be motivated by the presence of another clown.

So... the plan is to focus more on coral and pay the waiting game until I can source another captive -bred juvenile and attempt to make another party of two. The thinking is that a truly small one will be bullied for a day and then be accepted by the current male, who will then make the change.

As for coral, leaning towards lots of Rhodactis and Discosoma mushrooms and several types of Euphyllia which is already happening. Really trying to restrain myself to corals from the area and to place them in natural clusters and numbers, instead of a patchwork of color or a full-on coral collection (not that there's anything wrong with that :hmm2

Will post more photos if you're interested. Cheers and let me know your thoughts on pairing, coral, etc. Happy reefing!
Last edited: Mar 24, 2022

D
ARE MY CORALS HEALTHY?