Letting the cats out of the bag: (The Triology) - My new project, the 150 gallon tank

well this will be the newest addition as well as the last, moving out of my apartment I will be combining a couple of my tanks into this beauty. Here are a few specs on the new tank:
The tank is a Perfecto 150g (48x24x30), which I had custom drilled by a local glass shop- (4) 1" bulkheads reside inside the overflow chamber. The stand and canopy are perfecto's hardwood series, the stand is about 34" tall and the canopy is about 15" tall. When planning for this tank I was looking for a low-energy comsumtion type of set-up, that's why I'm only running the one pump (Dolphin AmpMaster 3000) that only draws about 130-145 watt while pumping out a healthy 3000gph. The skimmer is a Euroreef RS180 - I wouldn't have it any other way, the sump is a custom sump built to my specs by a local acrylic shop. IMO U.V. sterilizer are very beneficial in a system, thats why I chose a Current Gamma 40 Watt unit, from there water goes into the Current 1/3hp chiller mounted outside and returns back into the sump which will then return into the aquarium. I'm calculating that I'm returning only about 1000 to 1200 gph into the tank, which is fine- I don't need all 3000 gph creating tons of micro-bubbles in the sump. I'm planning on using a couple of Seio 1100's or 1500's on one of their controllers for wavemaking purposes. I decided on powerheads vs. a closed loop due to power comsumtion again, the two powerheads draw out 31 watts each max compared to a CL pump drawing out over 100 watts- I know it doesn't seem much, but every little bit helps out in this hobby. The is also two SeaSwirls used for water returning to the tank, this should also aid in the wavemaking dept. No lighting as of yet- but I plan on running 2 250w MH with 4 110 vho's those pics will come at a later time.
I'll stop boring you know with all this blah, blah, blah, here is some pictures enjoy.

The Tank being filled, base rock and live sand already in... 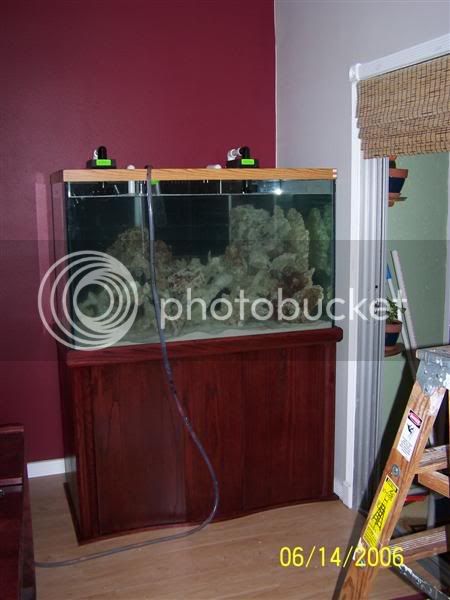 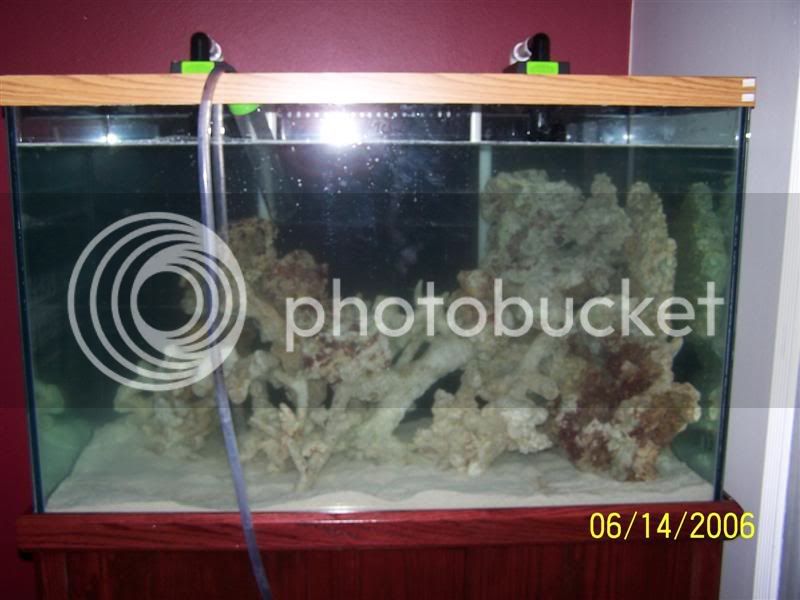 Over the top plumbing- 1" SeaSwirls 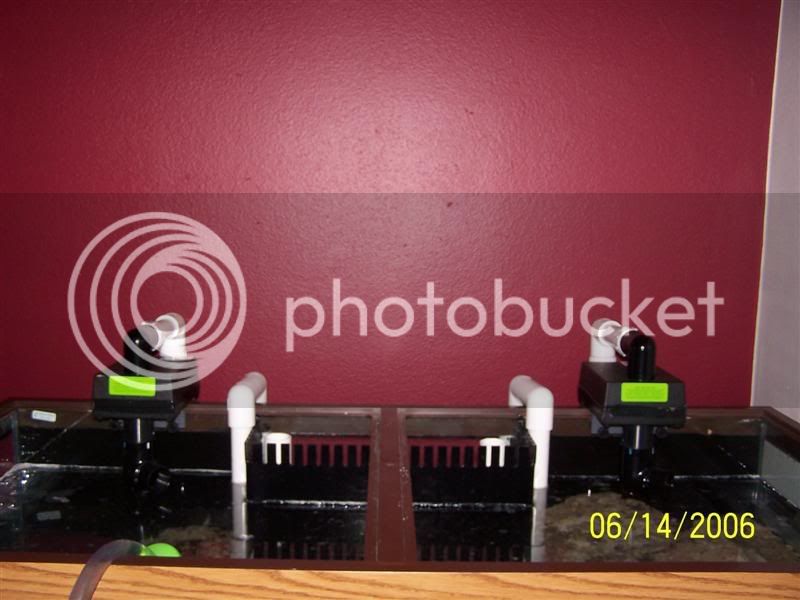 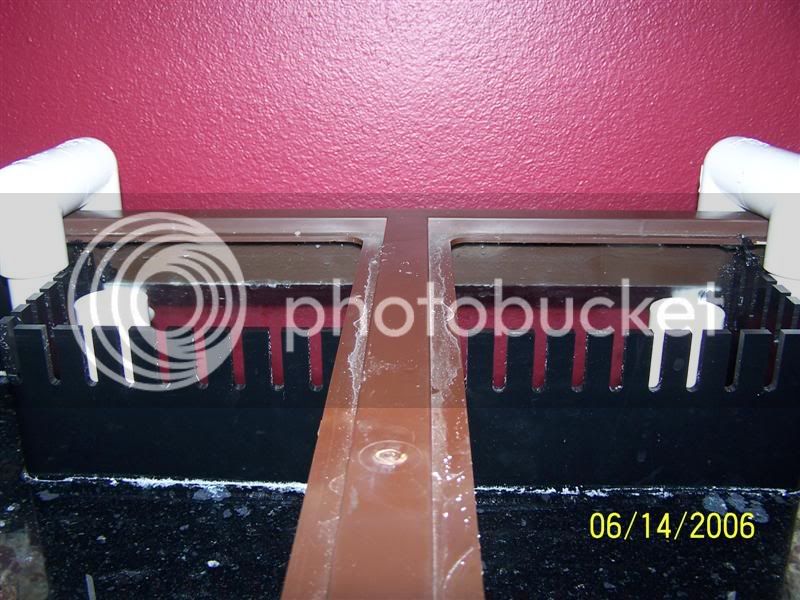 here some more:
Herbie's overflow method again- 2 1" main drains, 2 back up ones 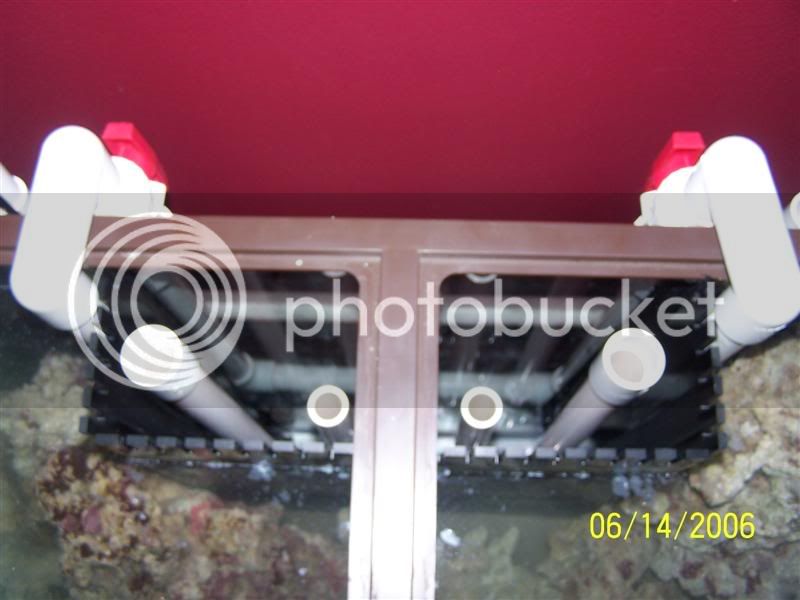 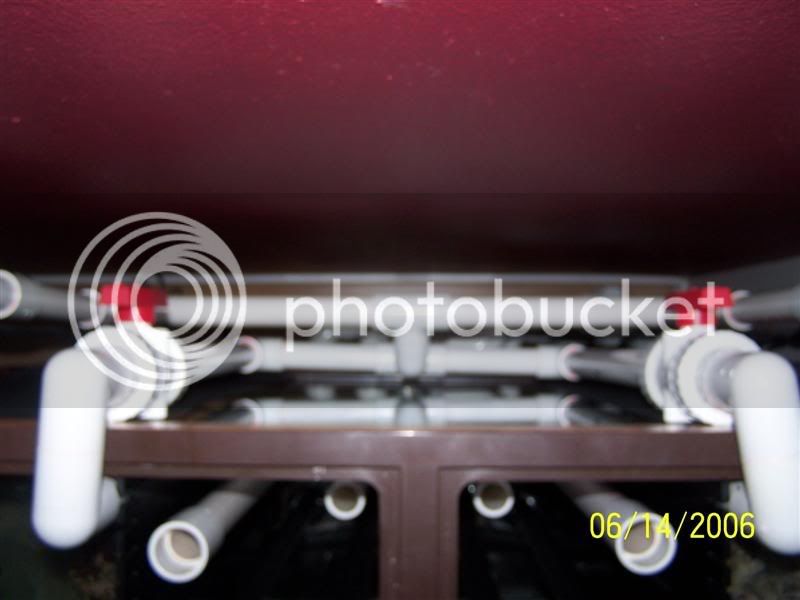 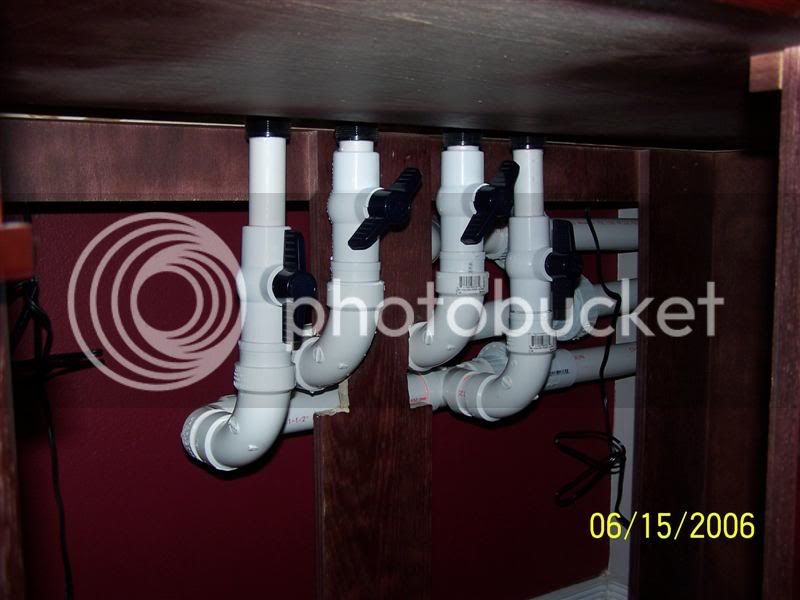 Through the wall plumbing 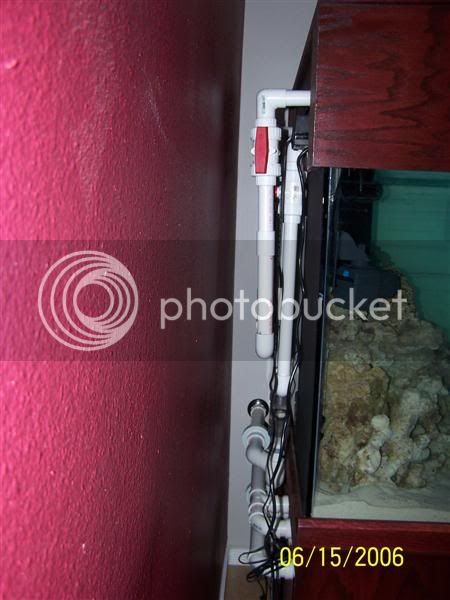 Breaking through to the other side 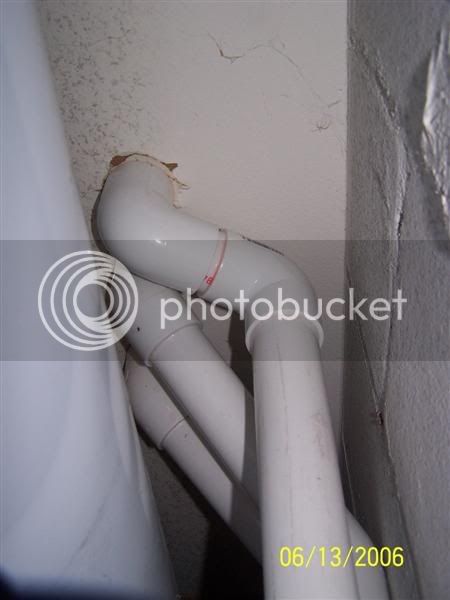 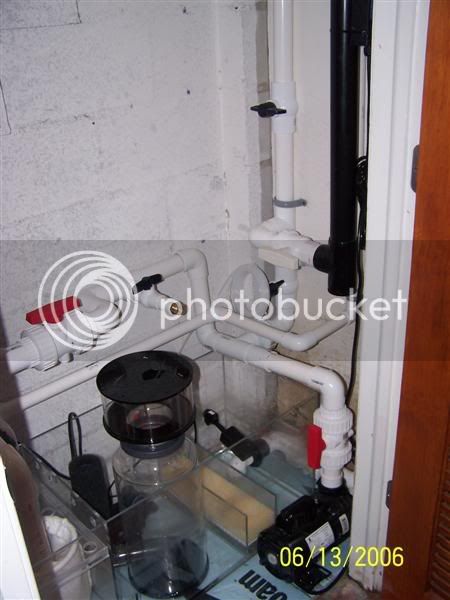 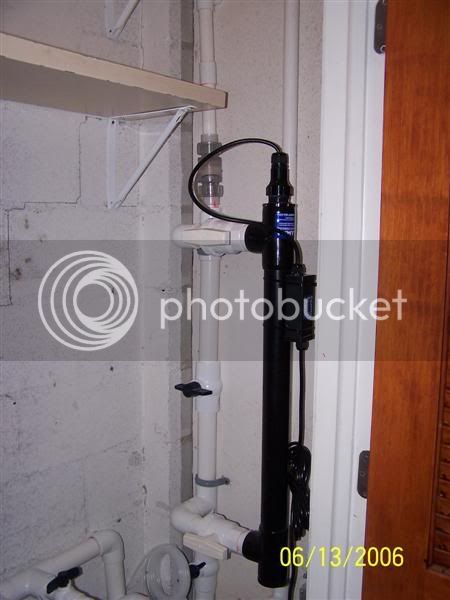 Chilling on the outside 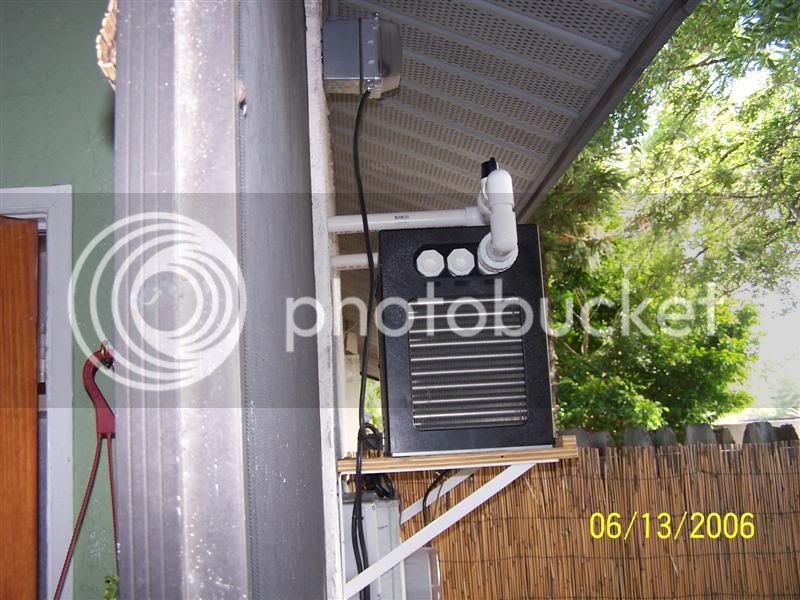 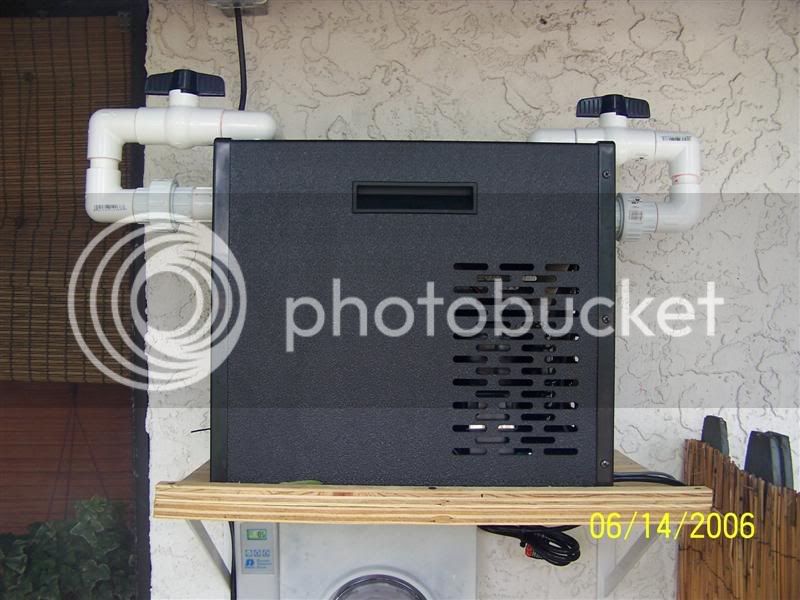 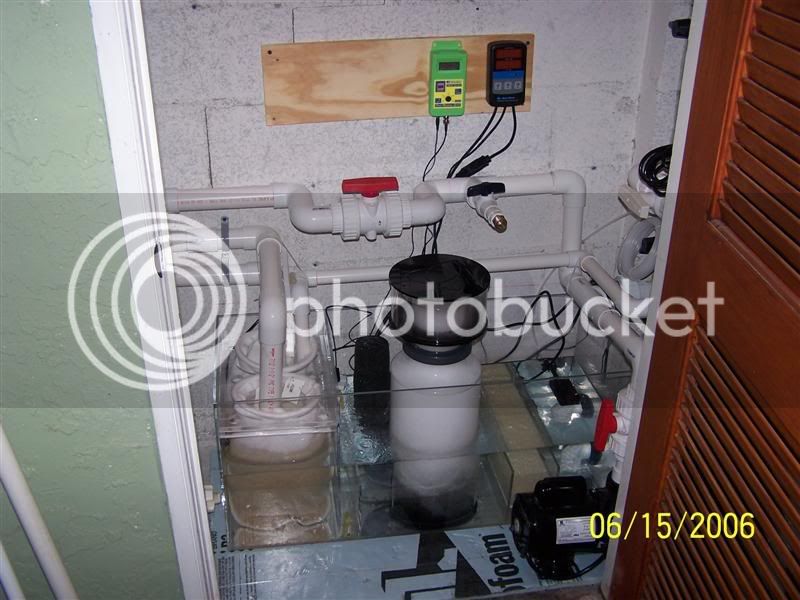 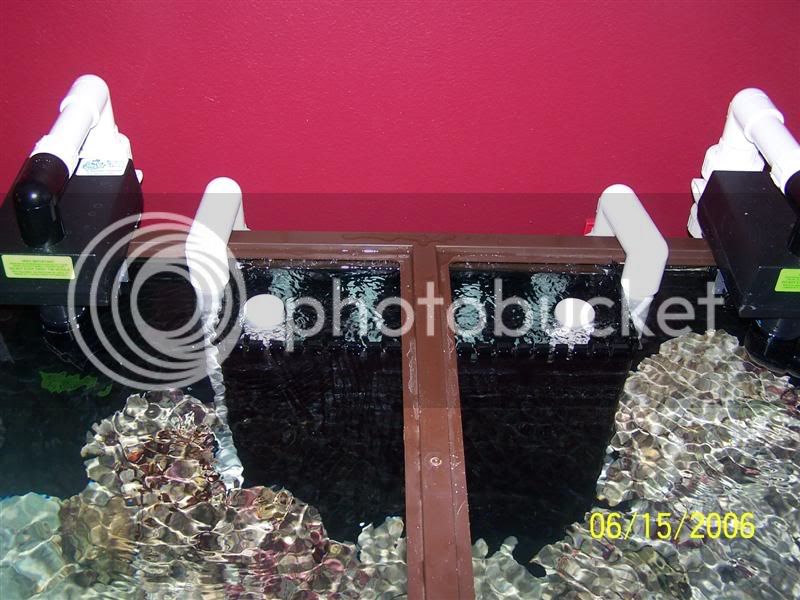 another shot of Herbie's method... 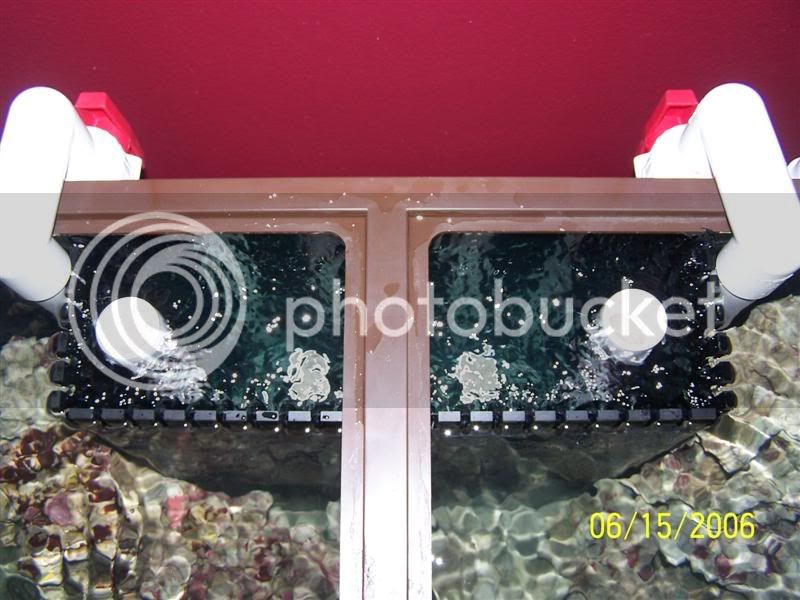 Live sand and base rock in- up next some lights!!! 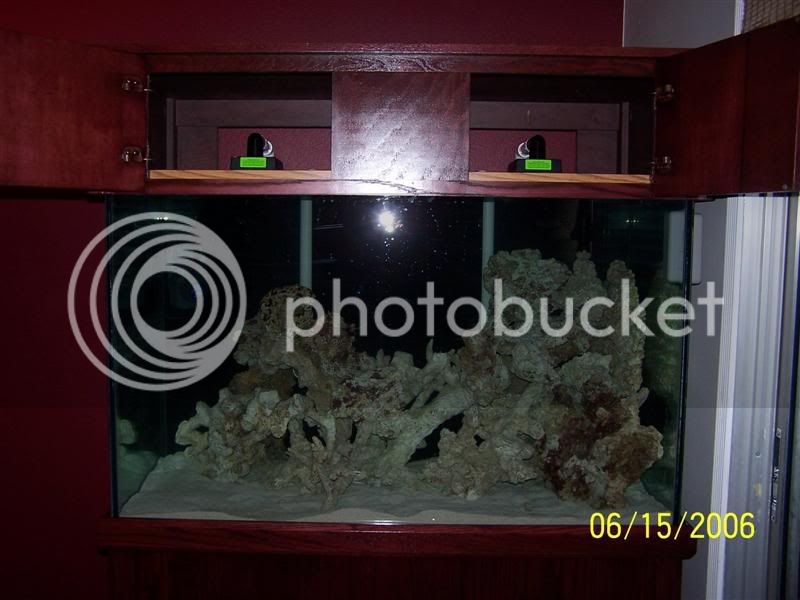 Full tank shot- not a peep 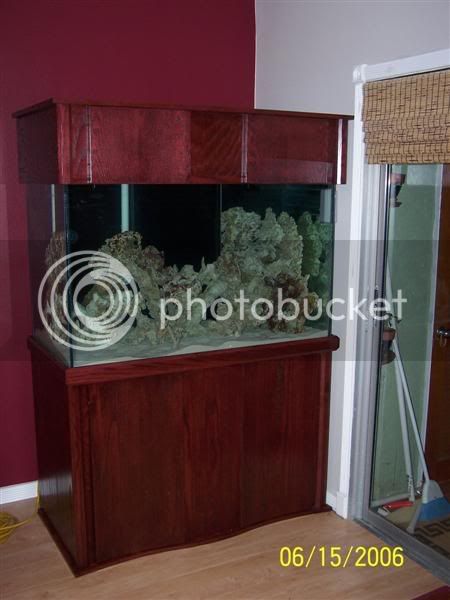 Thanks herbie for the great idea on the overflows
Danny

For an explanation of herbie's overflow method read here:
http://www.reefcentral.com/forums/showthread.php?s=&threadid=344892

I wish more people would relize how good herbies method is. Only thing I would change with your setup is using gate valves instead of ball valves for controlling the overflow. The ball valves can be quite the PITA.

What 2 monitors are those(green and black one)?

yeah, that is really the only thing I would change on it- you are right it was tough getting the ball valves to cooperate. The green monitor is a pH meter and the black one is a temp controller for the 500w heater.

this is how the 75 is supposed to be set up.

mattliu, this will be my first attempt at doing a reef tank without a trickle filter- I appreciate your input and trust me I will be taking notes this whole time.
Danny

Very nice setup! Great to have the plumbing in the other room and the chiller outside. Uh... should I comment on the chiller being right next to the electric meter :lol:

Since you are trying to go with an inexpensive operating cost have you considered trying to run without the chiller for the most part? With some fans on the sump and in the canopy, you could probably pull it off - depending on how cool you keep the room the tank is in.

I really like the plumbing though, nice job. I do have one other suggestion. It might have been a good idea to use some spaflex for some of the sections such as just before going through the wall, in place of the 90 elbows. It would cut down a little on the backpressure and maybe more forgiving when you have to do some work on the plumbing in the future. But still - a really great job! I'll be following along.

Thank rdmpe, yeah when planning the system I wasn't sure if I was going to be able to get away without using the chiller- trust when the light go up, I'll definetly try to do without it, it's going to be tough with the summer coming up, but hopefully the outside sump wont be too much of a factor. I thought about using spaflex as well but that stuff has a mind of its own. lol.
well thanks anyway for the compliments
Danny

with the humidity as high as it is in fl evaporative cooling is an ineffective means to cool. even if the sump was inside the chiller would still have been better b/c it is a more precise way to regulate the temp. even if you use evaporative cooling when the ump is in side, the heat energy still goes soemwhere. your central a/c takes care of this and the extra humidity that's in the air due to the evaporation. your only real gain is in the efficieny of the central a/c versus the chiller (if any).

YMMV but running some 4" 12V PC fans on my sump and refugium brings my tank temps down by approx 3 to 4 deg. which keeps my tank generally within a range that I am comfortable with. I agree that it will bring the temp and humidity up in the room.

Here are some interesting articles on reef temperatures, etc. Definitely worth skimming over IMO.

"What are Natural Reef Salinities and Temperatures?Really?
and Does It Matter?" By Dr. Ron Shimek
http://web.archive.org/web/20020610...om/fish2/aqfm/1997/nov/features/1/default.asp

I was looking over your plumbing again and noticed no refugium or nitrate reactors, how do you plan on battling them?

planning on doing my usual weekly water changes to combat a nitrate build up, there is no better form of nitrate export than by change some water... plus it helps keep everything more stable. I don't really like refugiums just for the fact that a lot of people tend to rely on them too much for nitrate removal and the forget that macroalgae also needs iron, iodine and other minerals to grow- well if those minerals are not replenished with additives, things just tend to get out of whack. By doing weekly water changes I have found that I remove whatever nitrate there may be and I also don't waste money on trying to dose the right amount of supplements into my aquariums.

Great tank, i am looking at the perfecto 150 as well. I am going to get it custom drilled as well, i was wondering, did they drilled through the bottom? or does it come out the back somewhere? LMK, also whatdya pay for the tank if you dont mind me asking!

<a href=showthread.php?s=&postid=7574140#post7574140 target=_blank>Originally posted</a> by Surferlopez
planning on doing my usual weekly water changes to combat a nitrate build up, there is no better form of nitrate export than by change some water... plus it helps keep everything more stable. I don't really like refugiums just for the fact that a lot of people tend to rely on them too much for nitrate removal and the forget that macroalgae also needs iron, iodine and other minerals to grow- well if those minerals are not replenished with additives, things just tend to get out of whack. By doing weekly water changes I have found that I remove whatever nitrate there may be and I also don't waste money on trying to dose the right amount of supplements into my aquariums.

<a href=showthread.php?s=&postid=7574140#post7574140 target=_blank>Originally posted</a> by Surferlopez
........ a lot of people tend to rely on them too much for nitrate removal and the forget that macroalgae also needs iron, iodine and other minerals to grow- well if those minerals are not replenished with additives, things just tend to get out of whack. ..........
Click to expand...

DOH
I never really thought about that. I need to do water changes more often for that reason (although my nitrates are ~0 ) but personally I like the fuge just for a different dimension of the system with it's own personality, good for pods, serves as a makeshift frag tank, etc. I really need to get an iodine test kit just to see if it is an issue with my tank or not - I have rarely done water changes up to this point...

I called perfecto and they assured me that on that tank none of the glass panes were tempered, so I had the bottom drilled...if I remember right I bought the tank from a lfs for about $470 for the tank alone, I don't really want to know what everything cost, I'm scared to find out.
Danny
You must log in or register to reply here.

R
acro growing out of the water