I see many threads with problems with Hair algae, then in return they take some advise and never show the results? Is there some examples of this and the list ways you treated the Hair Algae Problem? Long term means more than a month and not I took all my rocks out and scrubbed only to have it return without solving the nutrient issues. thanks...

every time i get it ithas been my fault

first time didnt know much about ro/di or phosphate management was new to the hobby. tank made it 3 years 1 year with HA before i cooked LR

second time 2 years ago still wasnt doing enough for phosphate removal and flow was only 10x so i had allot of hidden detritus. installed new dsb. took about a year to get on track.

last time, 4 months ago ro/di filters were old and had a cuke die behind my LR and my bulbs were old. allot of built up detritus in the sb.

THE CURE [after cooking LR]

all new 5" dsb removed allot of the LR and drilled holes and stacked it so i have colums. i can see behind the LR, flow is not an issue now so no more dead spots were detritus can build. 15x flow at night 30x flow in the day. use carbon 24/7 use a phosban reactor and change out the rowaphos regular. my fuge has a large chaeto ball that gets harvested regular. all new ro/di filters and bulbs.

reading here ive learned allot in the past couple years im hopeing i have a handle on it. for the past 14 years i was working 60 hour weeks 5-6 days a week out of town most of the time being the only person to take care of the aquarium. now new job great hours. i can start being a godd warden to my buddies lol
N

Very bad GHA many times. To the point of trying bare bottom. I received a new tank from my wife and went back to a medium level sand bed. On top of that I purchased my own RO filter (NO DI, source water is good) dropped the store bought bottles and dropped my PC lighting. I have not seen any hair algae in almost 1 year

I blame the PC lighting
S

I'm not picking up on all the abbreviations. What is pc lighting, what is gha, and why do I need to worry about the ro water I'm using from the lfs. I've been battling seahair forever. Thought I had a handle on it, now it's coming back. I've changed bulbs, Dropped my kh, and am now feeding seahorses with a feeding station to ensure no wasted food in the water. I've been told by my lfs that I need a seahair, and that they will eat the seahair algae. Is this true?

I took all bio-balls, sponges and pads out of my system. Within two weeks, I was totally HA (hair algae) free. It went from having HA covering almost all rock surface where coraline wasn't present, to gone, all gone. I haven't seen any in about six months now.

Lots of snails and hermit crabs works for me.

I'm not picking up on all the abbreviations. What is pc lighting, what is gha, and why do I need to worry about the ro water I'm using from the lfs. I've been battling seahair forever. Thought I had a handle on it, now it's coming back. I've changed bulbs, Dropped my kh, and am now feeding seahorses with a feeding station to ensure no wasted food in the water. I've been told by my lfs that I need a seahair, and that they will eat the seahair algae. Is this true?

Anyways, most if not all of algae troubles are causes from excess nutrients in the water or a build of debris somewhere in the tank. Everybody has there unique situtation and resolution can vary greatly. Just try to find out what is causing your water to be full of nutrients, or ways to reduce them. Algae can take weeks to fade away, so even if you correct the problem, it is still going to take a while to just disappear. Good luck.

Premium Member
my scarlet leg hermits mow it down.

I had it in one tank (and cyano in another at the same time). These were both new tanks. I did water change after water change on the hair algae tank, finally started going away. I then started pulling rock and removing it manually. Eventually passed. The cyano tank I still dont know what happened. I transferred most of the stuff out of it to a bigger tank and eventually cured itself. Only thing that was different was that it didnt have light on it all the time (like once every 2-3 days for a few hours). Funny thing is the tank that I moved the stuff from the cyano tank to never got an algae outbreak. And I am going to get flamed for this I am sure (this is the first time I am admitting it on the forums), I never used RODI water in that tank. It was also the same time the cyano went away was when I stopped using RODI in that tank. Just tapwater with ammolock and salt.

I like this success story, but Its not really explained as to why it got better:

By far the best thing for hair aglae are Bally Sea Hair Slugs!!! I use to be the Manager of a fish store and we had a huge problem with it in our tank. Put a few of those suckers in and they ate it all.
K

btw make sure to remove the sea hare carcass when he dies which will happen once you run out of hair algae. some people recommend removing it before he dies but i prefer to let him die because it ensures that he eliminated all hair algae there is to eat. those guys take alot of dumps too
S

Well, I am currently loosing the battle. To make matters worse, I just infected the display with crypt. Fish are asymptomatic eating well and showing few spots, but I know that may not last. I am looking into something novel to deal with them both.

I have also heard of a UV steralizer helping out with algae and if its not a reef tank copper kills algae. But when dosing copper you need to be very careful. I dont like that method I've heard of it being done u stress out the fish and can possibly burn them. I will stick with the Sea Hares and use mexican turbos or blue leg hermits once the sea hares eat them all.
F

I beefed up my CUC with snails and hermits and put a media bag in the sump with phosphate remover and it totally disappeared.

Team RC
I won my last war mainly by accident.

I had stray current in my tank that killed most of my fish. It took time to figure out what was the cause. I would come home from work and another fish would be MIA. The fish were just gone. Finally I saw my angel being shocked, tested the water and found out my return pump was leaking.

Within a month I had HA on 30%+ of my rockwork. I dosed VSV and while it did not spread it did not go away either.
One day I had just made up 16 ounces and was about to dose my 10 ml when I heard my son fall and get hurt in his room. When I came back the bottle had fallen into the sump and was pretty much mixed by then.

A few days later my skimmer started pulling oil. I emptied the cup twice a day for over a month and the HA went away. I never had the bacterial white haze from over dosing. When it got down to a few patches I threw some large Mexican turbo snails in and it had not returned.

Another thing I did was removed all my LR from my sump. I posted a thread asking if the issues of the rock out weighed the benefits. The tank stayed HA free for the next 8 months until I took it down. I still have the rock in a holding tank and I have no more HA.

Here is a picture of about 10 hours of skimmate production: 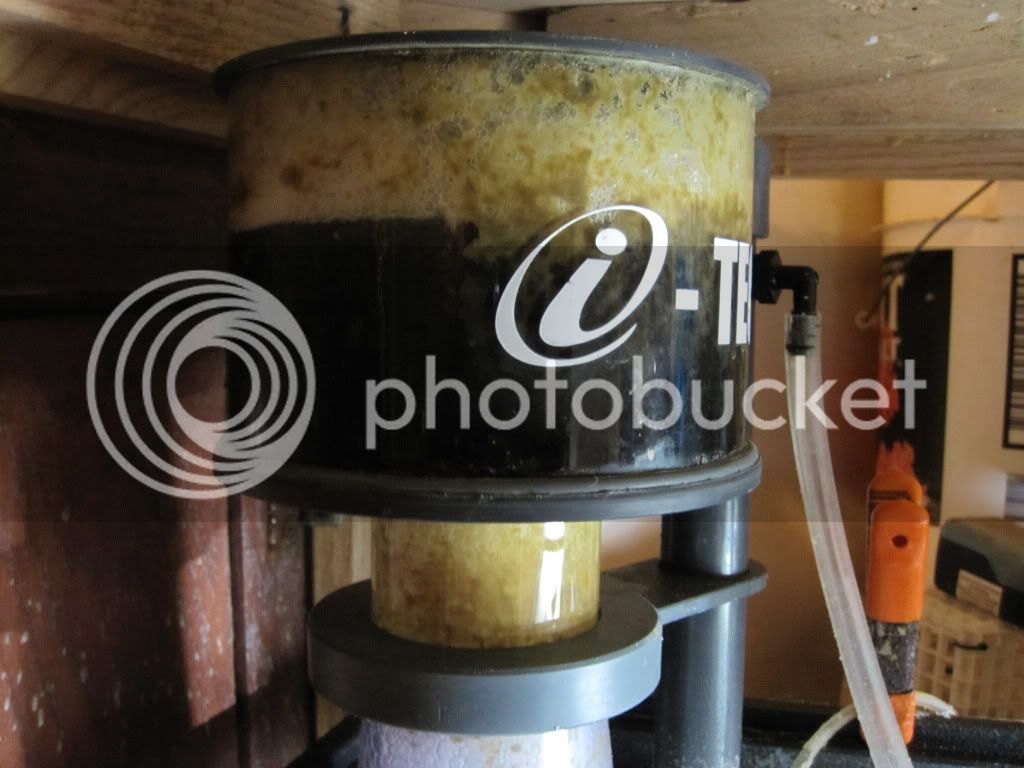 R
Hair algae in my Chaeto?