So, sold my 70 gallon classroom reef aquarium because they were supposed to do modernization construction. Well, that was postponed and kids back at school this year and supposed to have an extra year until construction, so set up this tank again. Well, now they decided to do a little bit of work this summer and told me water and electricity will be turned off and no access to campus, so have to take down tanks for summer. Some awesome freshwater fish that I would hate to rehome.

Instead of the huge ordeal of bringing the whole setup home, I decided temporary housing would be much easier for the summer. If you have a 3-4 foot acrylic tank that you could donate or sell for cheap, please let me know what you have. I am in Huntington Beach/Cerritos, so decently close to either of these cities would be awesome. Thanks for your consideration..

Two tanks sealed together, would be a huge hassle to separate, move, reseal, and setup again: 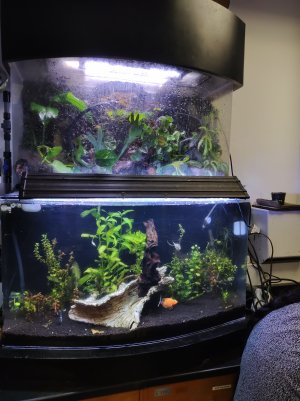 Dang, is this forum that dead??! This posting from last week is still on the first page

I have a 65 gallon (3ft wide) and a 72 gallon bowfront (4ft wide). Both are glass and both need some TLC to bring the stand back to life. Glass has some small scratches on them. Not the prettiest, but they hold water. 72 gallon has a canopy, 65 does not. You are welcome to one if you want to make the drive to Fillmore.
P

whiner2- Thanks for the offer, appreciated. I am just looking to get acrylic for safety and no-leak piece of mind
P

Got a couple of nice offers from Offer Up peeps. Thanks for the consideration
You must log in or register to reply here.