I have a 6' x 2' x 20" high tank. It's been running now for 10 months. I have 2 clowns that I have had for 8 years. They don't bother anyone. I had an algae bloom so I got a yellow eye kole tang and a lawnmower blenny. The tang is a pig. He eats all day. He thinks all the food is his. I got a little tail spot blenny because I was looking and finally found one. Just recently I got a pair of blue flasher wrasses. The tang chases the blennies at times. He doesn't hurt them but swims at you until you move even with the clowns and wrasses. So I was thinking I should add more wrasses as to spread it around. I wanted to add more wrasses anyways so I got 2 Mccoster wrasses, LFS QT them and all but they are on the small side 1 male and 1 female. Adding them has not gone smoothly. The male tried to jump right after adding and about knocked himself out. He hit the top hard. Next, he tried the overflow, twice I pulled him out of the sock. Now the Mccosters are in the rock on the side of tank. They only come out to feed. It's been 5 days. I haven't seen any aggression between the wrasses but the tang is rather hyber.
So, should I keep with the plan an add another flasher wrasse? Maybe a pair of filaments if I can find them. I would like to add a fairy or two as well.
Sell the tang? Put him in a time out in the sump? He is a good cleaner.
I was thinking I should get a breader tank or specimen container to keep the wrasses in the tank to help them adjust to their new world. Not sure on which one either. Would this help with a hyper tang?

Any advice would be great.

well the issue here is the introduction. you need to add the peacful species 1st. wrasses need to be among the 1st species in the tank if your planning on keeping them. esp flashers because they are skiddish. I wouldnt put it past the clowns to be bullying too. clowns are damsel fish and aggressive in their territory.Ok so fast forward to now... My advice is to add wrasses to the tank via acclimation box(you might have done this, but i dont recall hearing you mention it) Acc. boxes are great and let new fish get used to their tank mates and visa versa. add an elbow of pvc for them to hide in and make sure there are holes to allow food in ect. I used a gerbel carrying case and drilled holes very slowly(so not to crack the plastic) IMO wrasses are social creatures and only try to jump if being harassed. They really benifit from interaction with other wrasses, or atleast they "help" eachother out of hiding. The tang could be the problem. maybe try to rearrange the rock work a bit. Also it is a possibility the blues are harassing the mc's, and keeping them in hiding. BTW sorry for the paragraph.
B

What should I use for an acclimation box? The gerbel carrying case? How do you attach to acrylic tank?
Did see once the blue swim upto the mccoster male but the mccoster swam away and there wasn't any chasing.
The tang on the otherhand challenges everybody. I see the male blue flash and hold it's ground at the tang and the tang does the same. I'm really thinking the tang needs to go because I already rearranged the rock work. The tang doesn't bite but does follow or chase and challenge everybody in the tank. But then it goes back to eating for awhile. I thought kole tangs tangs where peaceful I guess every fish as it's personality.
The clowns stay in thier area. They only come out of there when hungry. The female beats the male all the time. If you start bugging her she'll whop you, she does it to my hand when I clean.
Ok, get a box and add wrasses, now or wait? Pull tang, in sump or sell?

Pull if your ok with that. You can always add another. It is hard to get tangs out because there fast though. I dont attach it to anything i just put the box at the bottom of the tank. you can also use a magnet type cleaning device to secure it. You can also buy them. but id just make it. just remember drill slow! best pic i could get if you look at my build thread it also has a few shots 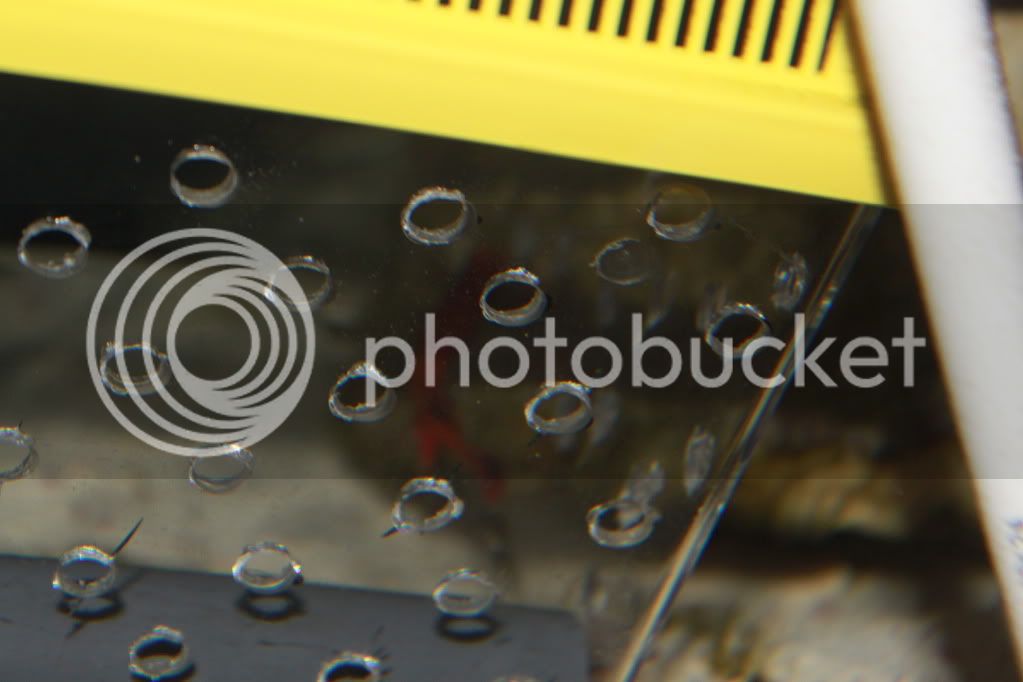 You raise the box to feed them? I guess you could shot some mysis in. How long do you leave them in there?
Not really looking forward to catching the tang. I'm not liking the hyperness. The wife likes him but she likes all tangs. I was thinking on adding a mimic tang/chocolate tang. From what I have read they are mellow. It could be a win win. I could put him in the fug it's 4' long but not sure if he will get enough to eat. There is also a lot of rock and cheato in there, not much room to be hyper.
I should have said I also added a male madarin goby about 4 months ago, my other favorite fish. When I added the mccosters, I also added a little female. So far I have only seen them hunting together.
Can't we all get along?

R
jumpy fish with no lid?