I just wanted to share my 10 gallon build with everyone. It has been a couple months in the making but I finally finished it.


Background:
My wife wanted to get some fish for the kids, so I told her that I would take care of it. I decided that I didn't want a freshwater tank since that is a long stretch from the 120 SPS tank I had a couple of years ago. After a lot of thought I decided that I was going to setup a small clownfish tank for my kids. My main requirements this time around would be that it can't have MH or I would pack it with SPS , and that it had to have a surface skim. Here are some pictures of my creation.

The tank straight from walmart. 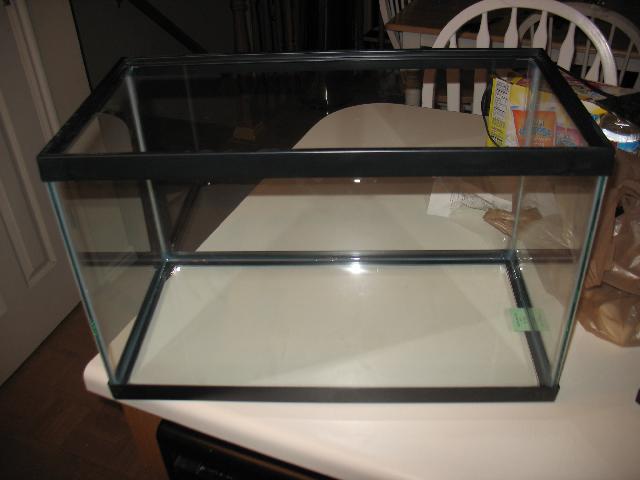 Here is the original surface skim plans that I had, which changed since I didn't like how agitated the surface was. 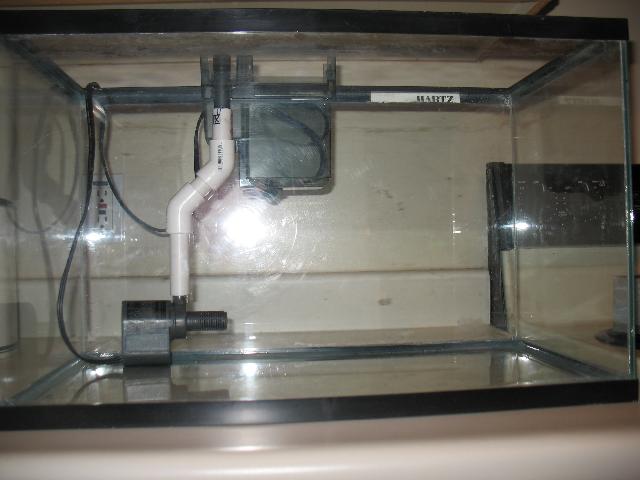 * Painted the back black and added an overflow. This was a test to see how well the overflow performed. 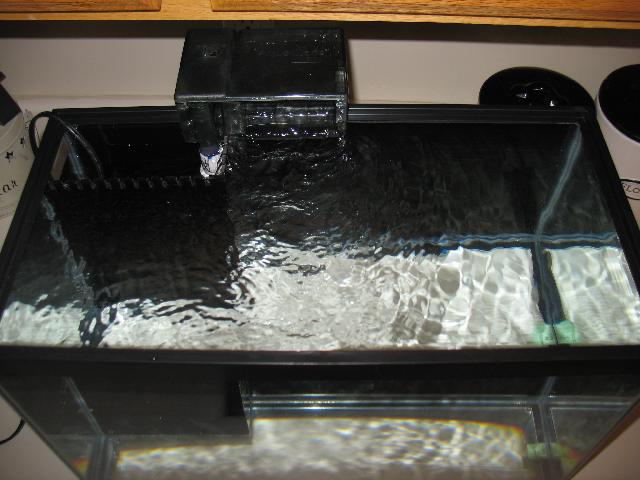 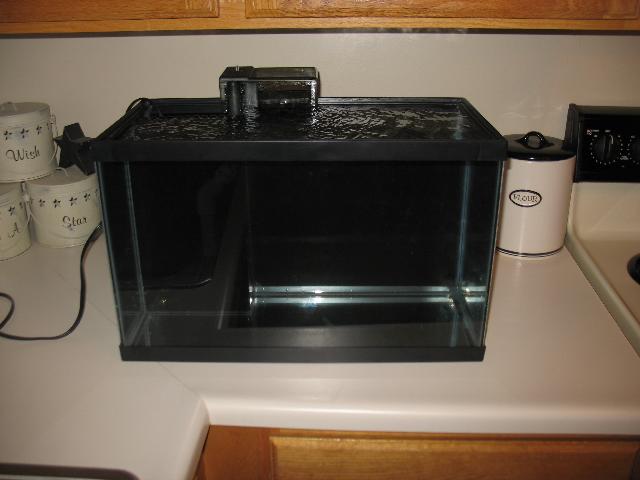 Here is a picture of the tank while it was starting to cycle. I added dead sand, live water and live rock which I acquired from a local reefer. You can also see the heater in the overflow which keeps the tank at 78 degrees. I have a bag of carbon sitting on the maxijet900 that serves at the return pump for the entire system. 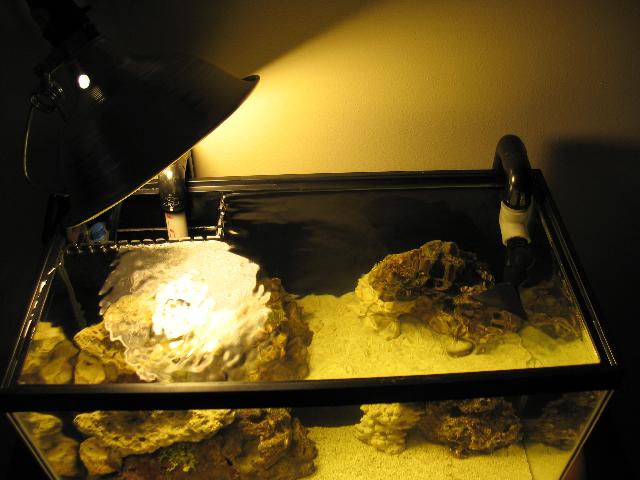 I picked up a standard 10 gallon hood from walmart, painted the underside white and put in a couple of coralife 20w 50/50 bulbs. They were fairly inexpensive and contain ballasts on the bulbs.

I put a piece of plexiglass over the tank to help keep the moisture out of the hood/bulbs. I left the portion over the overflow open so that I can still get some gas exchange. Downsides to this approach would be that feeding entails me just dumping their food into the overflow and letting it get sucked up and spit out into the tank as opposed to just dumping it in the tank. 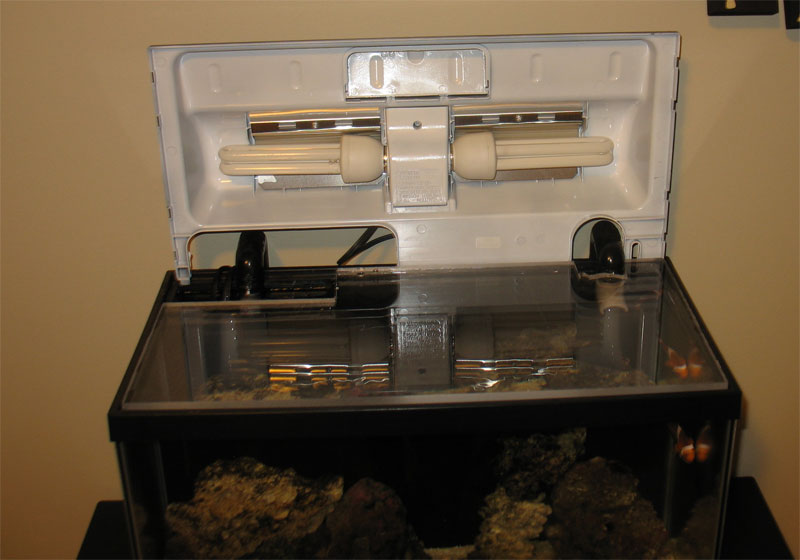 Finally, here is the entire thing in action: 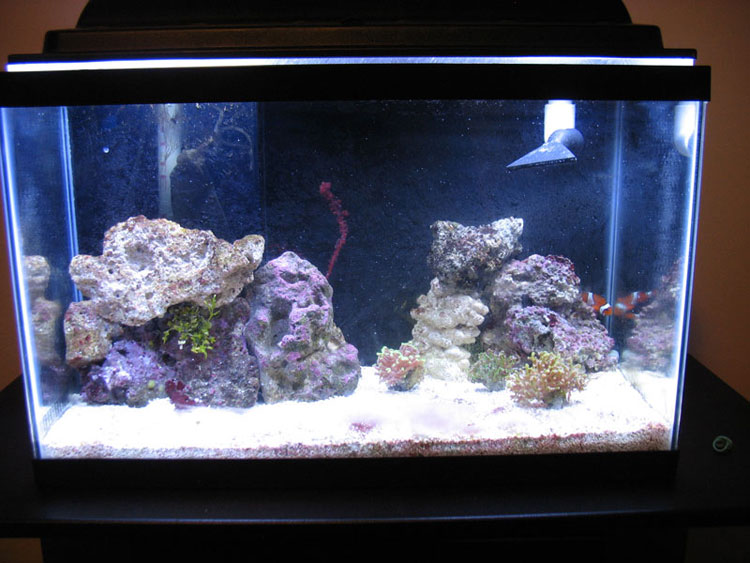 Since this setup is skimmerless I change 2-3gallons of water a week.

Please let me know what you think. Thanks for looking.

I love your set up and I am especially curious about the lighting. What corals are you going to keep under your lights?

My ultimate plan is to have a mixed reef with SPS and LPS. I am going to be getting some small frags of pink birdsnest since it is a hardier SPS and see how it does. If it does well then I will slowly work my way up to some more finicky pieces of SPS. I am going to try and keep a light load, as far as corals are concerned. This tank was suppose to be fish only, but once an SPS addict, always an SPS addict
S

Keep me posted on how it works out. I just bought a few of those same lights

I will keep updating this as I try new(to me) things. You'll have to post some pictures of your tank once you get the lights on it.
N

I see you've got some nice Macroalgae in there, great for every saltwater tank IMHO
E

Sorry it took me so long to post some updates. I kept getting home after the lights were off. I haven't really added anything because the wife isn't too happy about the tank. Here are some updated pics: 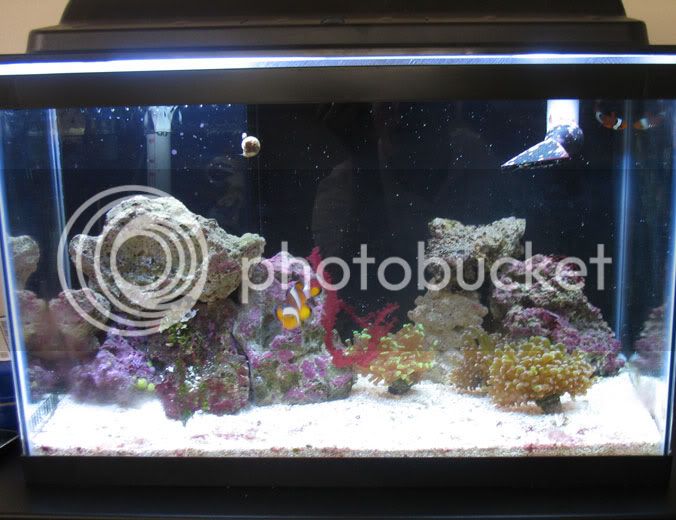 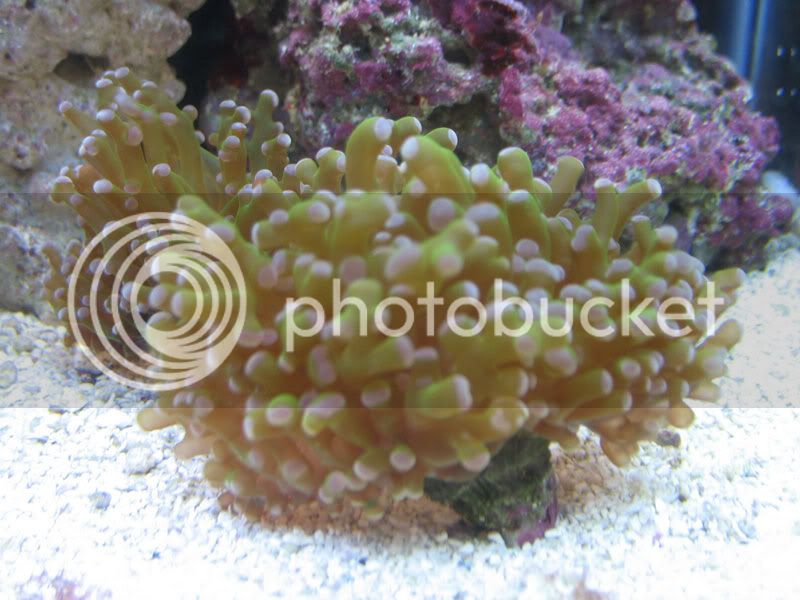 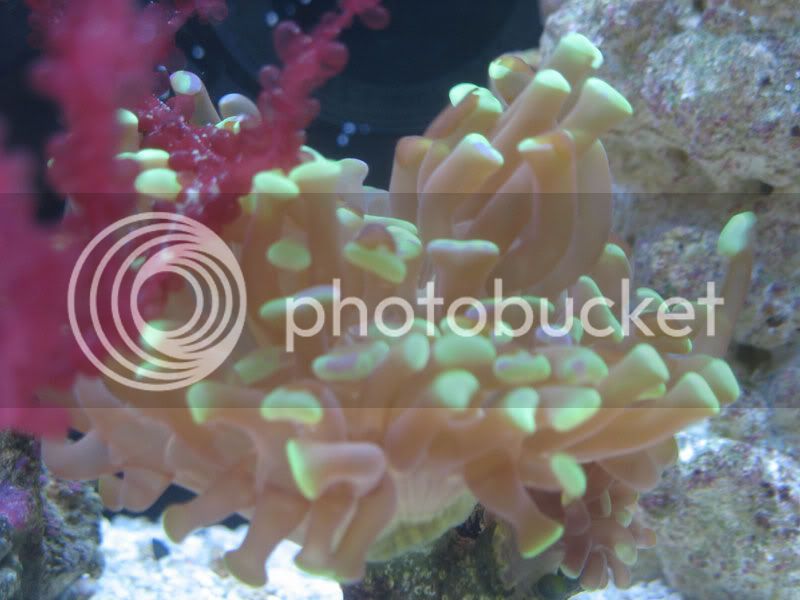 Do those bulbs work pretty good?
I just recently had to switch all of my stuff over to a 10 gallon because of a "Party Accident" (alcohol involved) and now I think I'm just going to stick with it. And if those lights work good I'm going with that.

Premium Member
I used a pair of the 9w bulbs like that and they kept coral alive in my 2.5g tank. I don't see them actually being ideal for a reef tank, and I think SPS will have a hard time living under them.

edit: I don't mean to crap on your tank thread. It looks like you're on your way to a nice tank. I'd seriously consider a lighting upgrade as your next move though. A T5 fixture (overhang will only be 2" on each side) or 70w MH fixture would work wonderfully!

Premium Member
That is some 10-gal for the kids. Any reason why you did not try LEDs since you ruled out MH?

Nice acrylic work. I figured this would be the perfect excuse to make a HOB skimmer.

The LPS is actually thriving under these lights, the actual bulbs are cheap, and they fit in the hood. Those things being said I don't think I'm going to switch to another type of lighting.

If I was going to have an SPS tank, then I would definitely go with MH. For my purposes of a small lps tank I think the corallife bulbs are working great.

I didn't go LED, T5, of MH mainly because of cost. My wife wasn't keen on this project so I had to make it as cost efficient as possible.

So, I did the same thing you did. I went to Wal-Mart and got the Lid, and it is rated for up to 25 watts per bulb, I went to the local "Reef Store" and got 2 of the lights. (20 watt) and fixed everything up. Except that I didn't paint the hood white. And my tank just doesn't seem as bright as yours. It looks like you have 2 more bulbs in your pictures compared to mine, it just doesn't seem as bright! it makes me sad, you pictures are exactly what I was looking to do, and it doesn't work. Plus. I'm still kinda new to all of this (nano reefing) and yeah my Zooanthids don't seem to be fairing well under these lights?

Anyone have an Idea?

Hopefully RC doesn't mind, but here is a link to the exact bulbs that I purchased, so that you can compare them to what you bought.

I didn't paint the background because of the way I made this tank.
I did get the same exact bulbs that you did.. And now that I have taken pictures of it. It does seem like there is the same amount of brightness in there..

Also, I do realize that the 2nd bulb in my tank is more directed to my overflow area, which I didn't think about for some reason, so it looks like I'm going to have to make a canopy for it to direct both bulbs in the "Viewing area".

But any other suggestions or anything like that would be gratefully appreciated.

I have been battling cyano-bacteria for a couple months. I have tried less feeding, shorter photoperiod and more frequent water changes. None of it seemed to be helping so I decided that I would add a sump and a fuge(which isn't finished yet).

I added a 10 gallon tank for the sump. I siliconed in a plexiglass divider to help filter out the micro bubbles from the skimmer and it appears to be doing its job. Then, I added a mag 3 for the return pump, which ended up being WAY to powerful, so I added a ball valve to reduce the flow, to something more manageable. 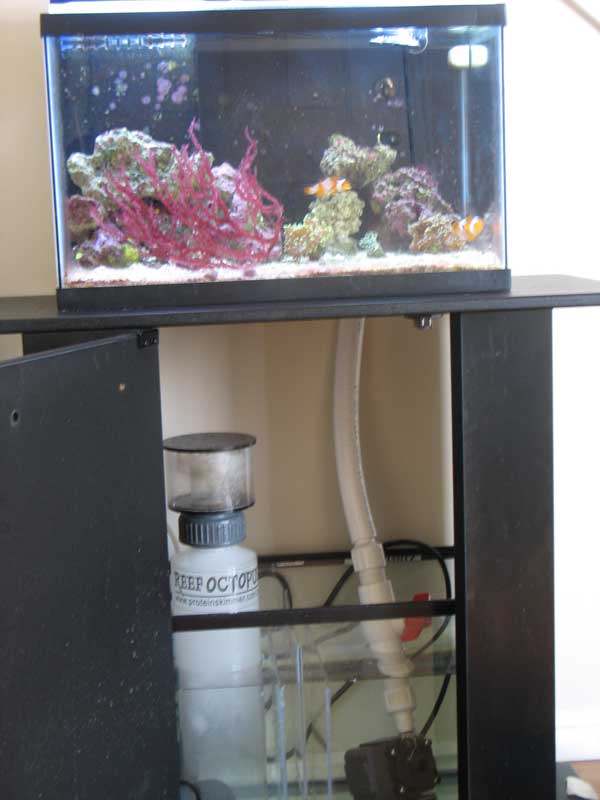 The skimmer is a bit overkill, but I got a killer deal on it, so I couldn't pass it up (Octopus NW110). I am currently running the skimmer while the lights are on (1:30pm-7pm). Hopefully I'll be able to increase the photoperiod once I get some sand/rock/macro and actually have a fuge down here. 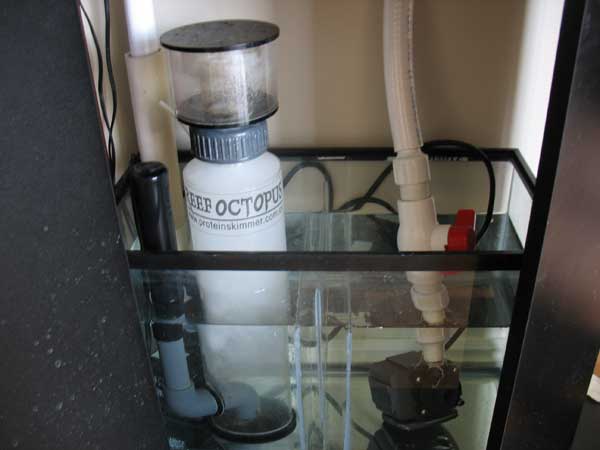 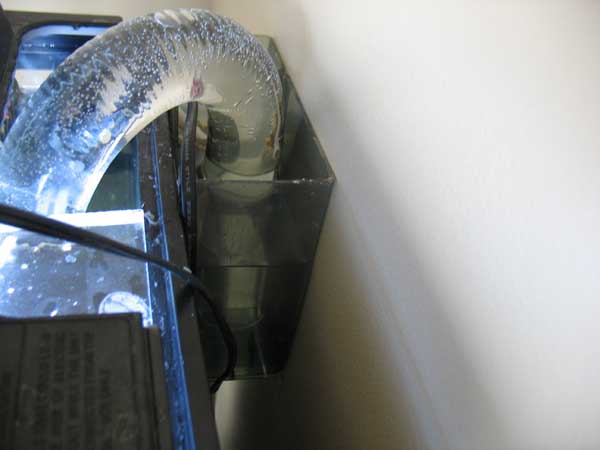 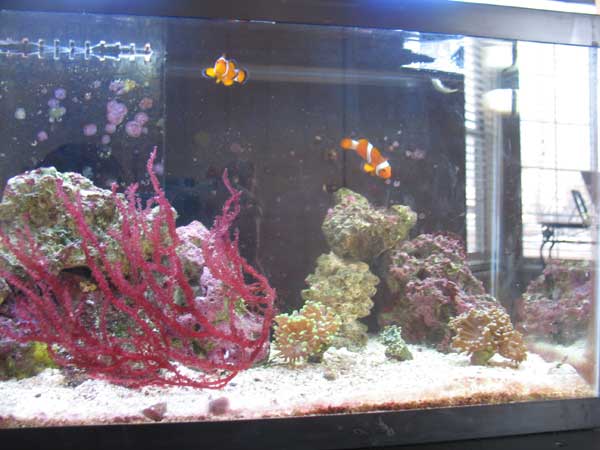