So I set up my sump in February. Since then I have had two mag drive 9.5's stop working on me. They both lasted around a month and a half or so. Both of them were brand new. The first one stopped working and when I opened it up was extremely clean with no build up on it. I had it replaced by warranty, but still had to buy another to use in the meantime. My second one died on my in the middle of the night last night, and when I open this one it had a bit of build up on it, but not too crazy. I took a picture so you guys could see. Once I cleaned it a bit it started right up again.

Whats causing these pumps to die so fast on me? Is it possible with a ball valve that I have it dialed back too far that the pressure is destroying the pumps? I have the ball valve around 50% closed.

Here is the impeller after I started to clean it a bit. 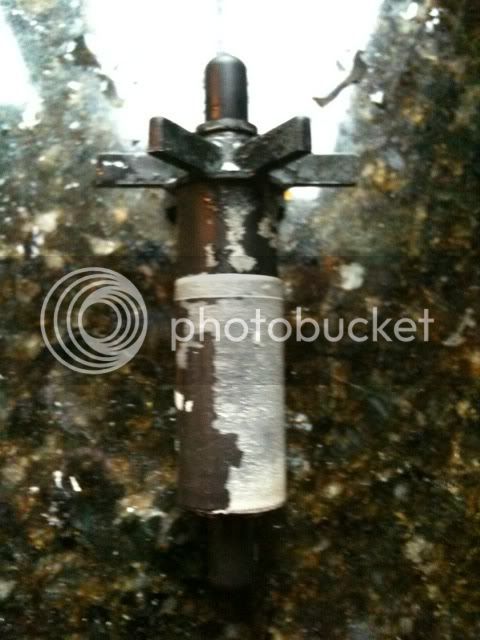 Is the ball valve before or after the intake? It should not be before or it will shorten the life of the pump. You said that after cleaning the 2nd pump it started back up. Is there some sand getting sucked up and jamming the impellar?

The ball valve is after the intake connected to the return line. I dont think there is any sand but I recently did a complete rock swap so there was a lot of debri floating around in the tank, total cloudiness. A lot of that has settled into the sump now.

Are you dosing kalk etc near the pump intake?? Strainer on pump intake clogged/restricting flow?

I ran multiple mag12s for years without even cleaning them... Never gave me any trouble (outside of heat, danner/supreme makes some of the hottest temperature pumps I've ever used)

I dont dose kalk, just two part, and neither are dosed near the return pump. I do have a sponge on the inlet of the pump to prevent microbubbles

If your trying to reduce flow from the pump to the display replace the valve with a tee and then put the valve on the tee. open as far as needed to bleed off the some of the flow. I prefer gate valves for this.

Intersting never thought of that. Not sure that having a ball valve is the problem though, isn't running a valve pretty standard on these??

fluval canister filters have a valve built in to slow and stop flow but the directions say you can't set it lower than 50%. I believe the motor will over heat if there's not enough flow around the magnet/impellar to cool it. the tee is a great idea. chances you got two bad pumps are slim.

Premium Member
How much do you have it dialed back?
S

Moved on to my couch

jimrawr said:
I have the ball valve around 50% closed
Click to expand...

sjm817 said:
How much do you have it dialed back?
Click to expand...

Why dont you get a mag 7 this time and let it go? Wasting alot of electricity and possibly this could be burning up the pumps.
J

same here, I have never touched it, only turned it off maybe 5-6 times, are you running your pump through a gfi strip?, take that foam cover off the front too, I had a mag 5 that always had problems with that thing on

Premium Member
I'm not a big fan of running too big a pump and throttling it way back or wasting electricity by bypassing flow back to the sump. A ball valve is fine for fine tuning but not major adjustments. Hard to say if the large reduction in flow is causing the pump to fail from the reduction in cooling flow. If you have to cut the flow back by 1/2 and dont have a use for the excess flow, maybe its time to try a different pump.

Yeah you guys may be right, I may try a smaller pump and see how long that lasts me

Premium Member
Do yourself a favor and get an Eheim 1260. Quiet, plenty of flow and what should interest you, very reliable. People have had these pumps running for many years.

How about an Eheim compact? I dont have room for the one you listed. The mag barely fits in that space

I find if I keep Ca targeted at 420ppm and not much higher, it tends to reduce precipitation on heaters and pump impellers. Also, precipitation increases with temperature which tends to cause build up in these areas. A more efficient (cooler running) pump may be just the ticket. GL!

jimrawr said:
How about an Eheim compact? I dont have room for the one you listed. The mag barely fits in that space

That is a pretty tight space. I wonder if that has anything do do with the issue. Can you post a pic of the setup?

Dr. Reef at ur service

RC Sponsor
strange. i got 6 mags from 9.5 to 18 running for 5 yrs now. some dialed down halfway. never cleaned them either.

thats what I thought, my mag 9.5 has been running also for 5+ years turned half way down and only cleaned once when I was in between tanks.
You must log in or register to reply here.

E
I need a Return Pump Suggestion: COR20 Not Enough