I have a mandarin goby w/ a sucken stomach. I bought it like that. It feeds good with frozen food... but i don't see any improvements in stomach. Its been like this for 2 months. It eats a lot but the stomach remains sucken. (female)

I have another mandarin goby that came fat from the LFS and it also eats frozen food and it remains fat. (male)

Did i get the female too late? I would imagine she should gain the weight back, but I don't think it should take this long, right? Does anybody know?

I feed it mixture of brine shrimp w/ spirula, blood worms, mysis, cyclopeeze. I started feeding everyday for the first month..but i wanted to go back to every other day.... it doesn't make a difference.. the stomach remains sucken even if i feed everyday.

Maybe I got her too late?

any suggestions are welcomed.... they will pretty much eat anything so let me know if someone has had some success with renursing a mandarin back to full wieght.

I've always read to avoid the ones with sunken stomachs because they are already starving. Is she getting any pods at all?

Staff member
RC Mod
It's not good, and usually leads to death within a few weeks. On the other hand, if she's eating, it's not as bad as it can get, and possibly your comparison to a really fat one is influencing how you see it. IE, it may not be too bad. I'd continue to feed daily for the sake of the mandarins. You might also set up a refugium: a 20 g refugium should produce enough pods that you won't have to feed them at all.
B

I think she gets some pods as there are still pods in my tank. I sometimes see her picking at them. But I think most of their food comes from feeding... they eat right out my feeding airline (attached to a syringe). After they eat i can see a HUGE budge in their "stomach" which is right in front of the sucken "stomach". Is that their stomach? Maybe I should ask that first?

I know I wasn't suppose to buy them like that... but she had no chance at the LFS. She wasn't eating anything and was in tank with no live rock. I think she was there for a month. At least she had a good past 2 months...

Pics before and after feeding to compare that bulge you're talking about would help.
B

all the photos are when the fish have NOT been fed. I'll feed them later tonight and try to get photos of them full. 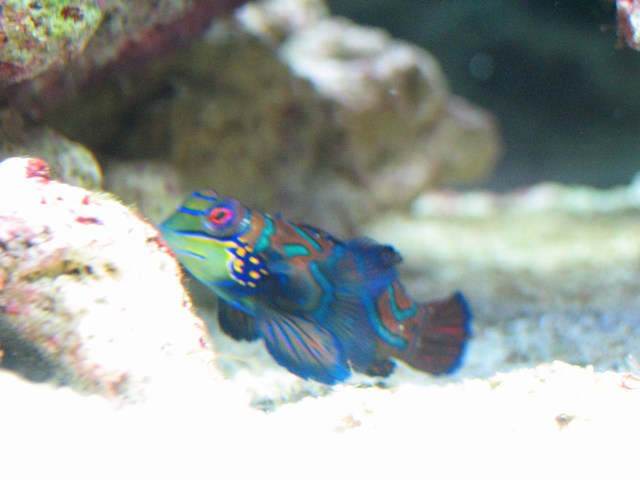 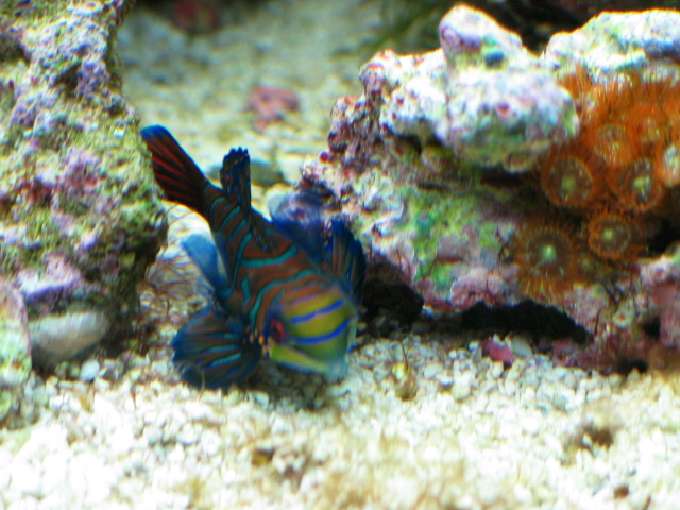 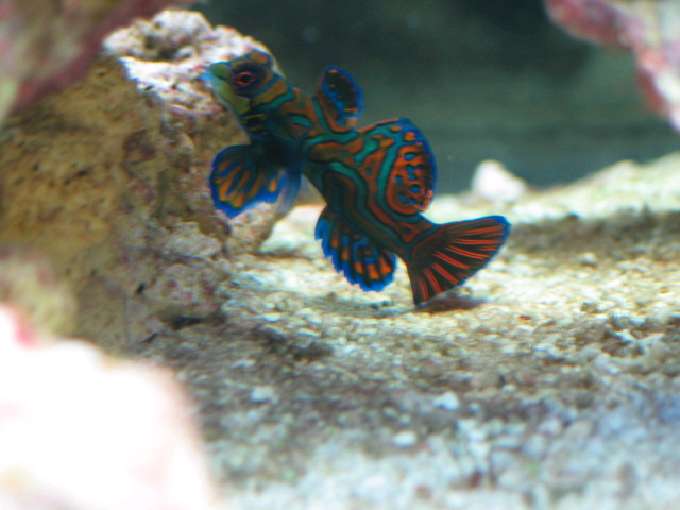 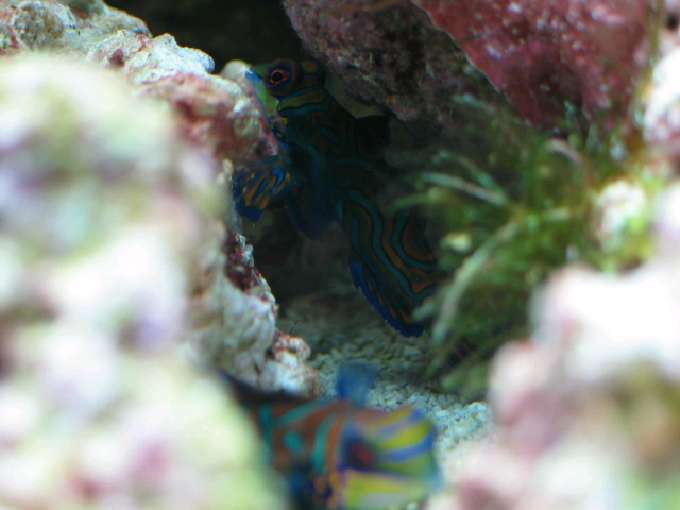 and my tank left side 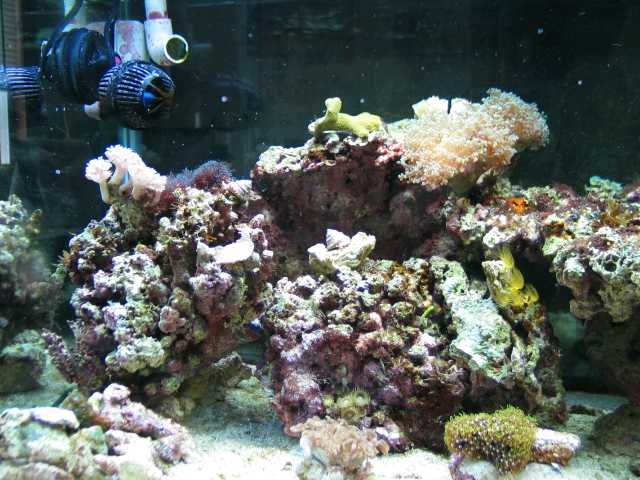 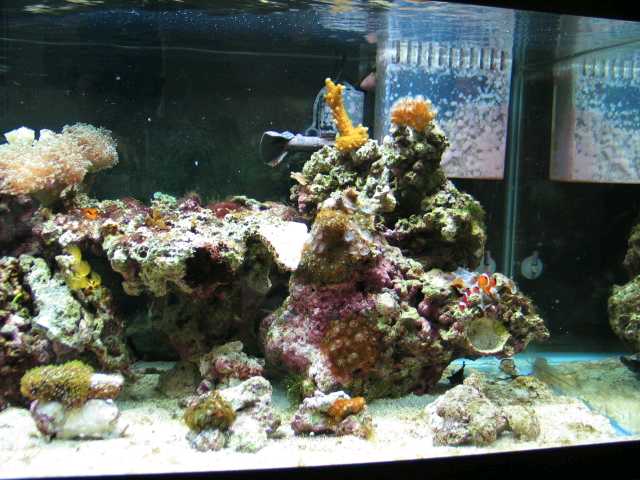 the male is less shy than the female... but both are pretty fun to watch.

I hope you can see the sucken stomach in these pics.

Staff member
RC Mod
She doesn't look too bad off. I think she should be all right if you keep feeding her---feed your tank DT's or Phytofeast, too, on a near daily basis: that will feed up the pods that do exist. If you could do a refugium, I'd highly recommend it, even if they are eating frozen. Pods are their natural food and 2 mandys in a 40 even if they eat frozen are pushing it.
B

Yeah, I know I'm pushing it with 2 mandarins. Had to try. I like my fish in pairs. I already dose with phyto. I'm debaiting on the refugium. My sump is pretty crowded already w/ the skimmer. I think i'll try to set it up.

They are so cool together... hopefully she'll make it.

She certainly is emaciated still. If she is eating frozen mysis try getting some pe mysis (hikari is a good second choice). It is whole and larger than most others, and IMHO more nutritious. Mysis looses a lot of nutrition when it is chopped up. Soak in a supplement like selcon or the like. I would try target feeding her with a baster twice a day as much as she will eat and I'll bet within a month she'll be as fat and happy as ever.

Buzjerry: I got a mandarin from a lfs. He was in a tank with nothing in it, and was dieing. I took him home and put him in my 75 gal. , 40 gal. , sump and a hang on back fumg. 125 lbs. live rock 3" live sandbed. I put alot of shells in the tank for pods to hied in. My mandorins sunkin stomack was gone, in about to weeks. Mine only eats live pods. I think as long as yours is eating she should be ok, good luck.
B

get sushi roe, aka flying fish eggs from ur local asian market, they tear them up, they are highly nutritious, give ita shot
You must log in or register to reply here.

P
my 2 cents on the lawnmower blenny