I have been a T8-T5 guy for all of my years in the hobby, not that MH's didn't cross my mind at one point or another, but never wanted the heat associated with them. Too many friends with them had to run chillers and me not wanting the added expense of buying and running one.

As far as the fixture is concerned, it's been flawless and has helped grow my coral, but the cost of replacing the bulbs every 8 months at a tune around $200 has gotten old.

So.......Since the time LEDs hit the hobby I've been watching them closely and recently decided to tip my toe into the LED water. With a lot of research and a very limited budget I pulled the trigger.

With free shipping and in less than a week, I got them tonight: 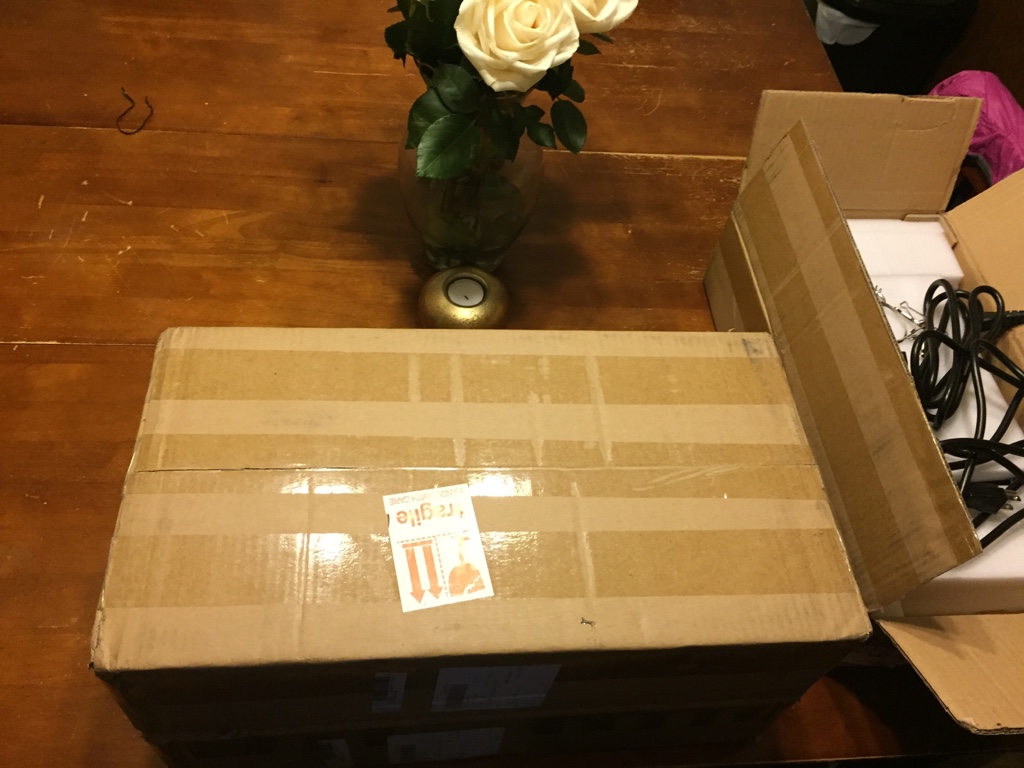 On opening the box, which is well packed, as advertised, comes with two power cords and hanging kit: 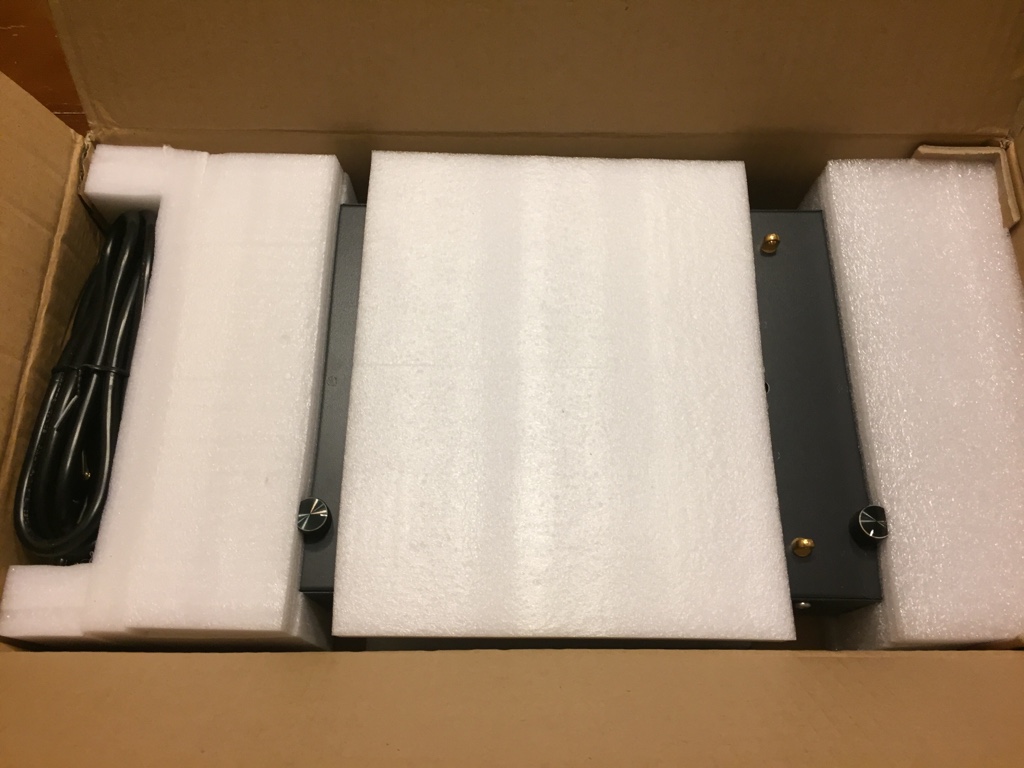 Take out of the box, in your hands feels and looks well made: 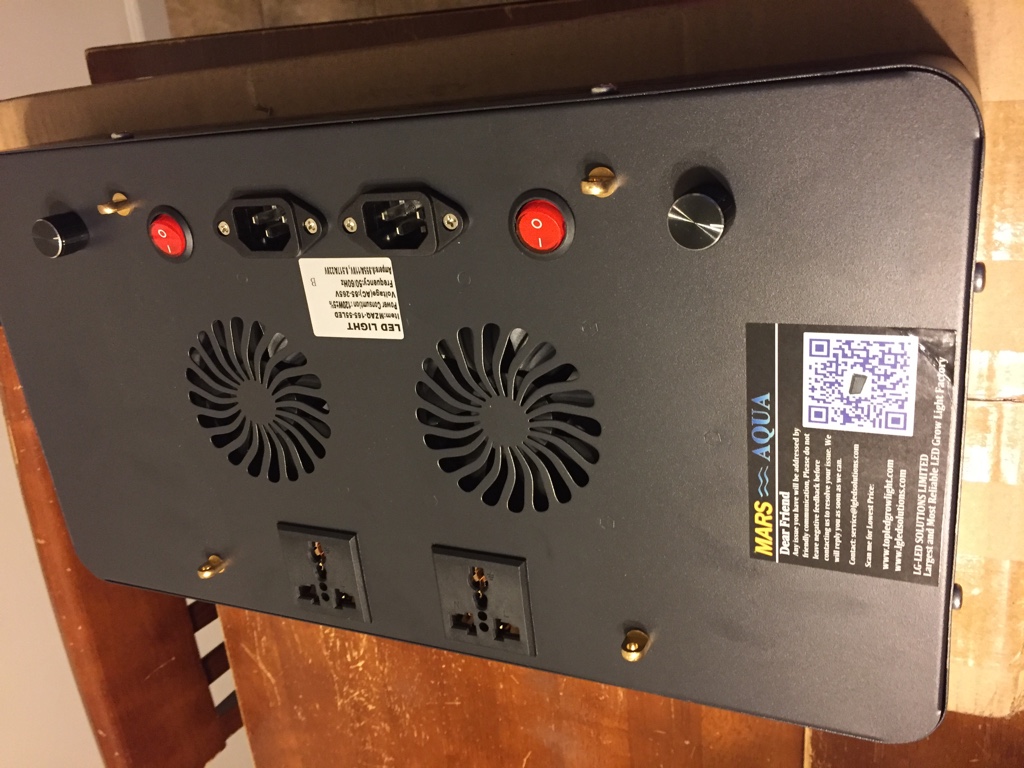 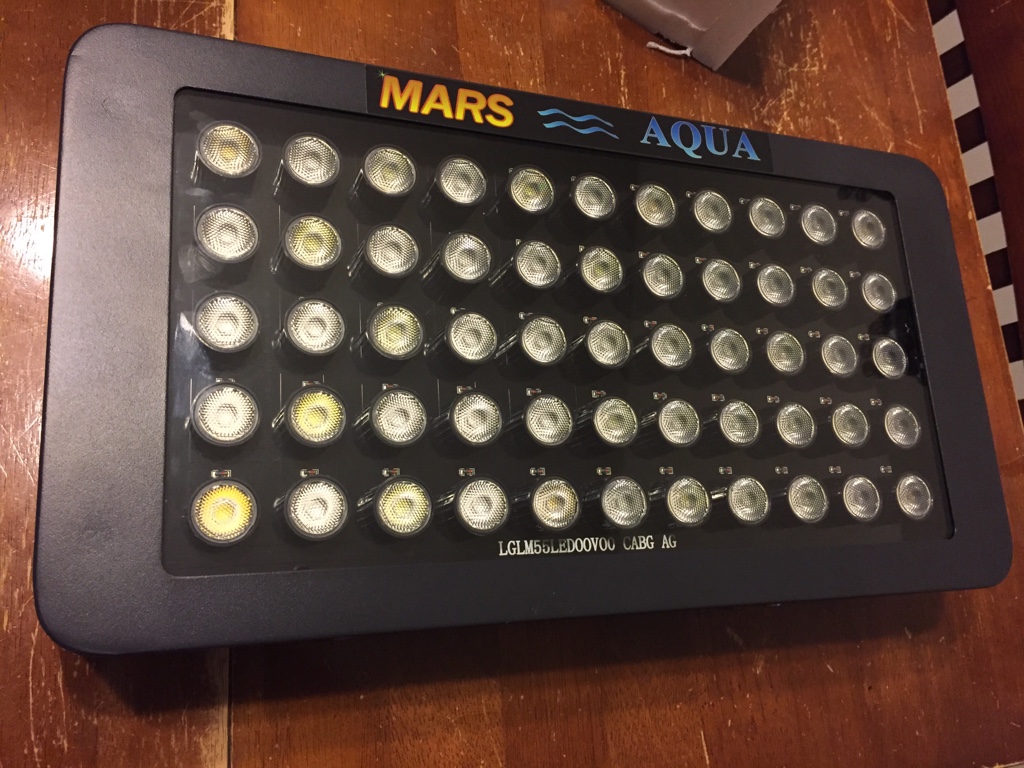 So of course I had to plug it in and like so many have said, these pack a punch! Very bright! (No picture as of right now, phone is about to die!)

So that's it for now, tomorrow morning I will be installing them over the tank.
So far, I'm impressed.

Nice. Looking at these for my fowlr build. Prob a bit overkill but at that price, why not.

I think that the MarsAqua is the best thing going at the very bottom end of the price ladder. The only issue I have with them, and it's a very small deal unless your tank is more than 24" deep, is that they only run the 3w leds at between 1.8w and 1.9w compared to all the other inexpensive led fixtures running their same leds at 2.2w. So a bit better PAR especially at 24" and deeper. Like I said, it's a small thing. Otherwise most people seem to like them just fine. It's a great entry level or budget fixture. I use ones just like these (sold by Reef Breeders years ago for more like $150) over one of my refugiums.

Following this for updates!

I use mine for temporary setups, the only negative is the par level drops off a bunch when you get away from the foot print of the light.

Sorry, no updates today. Spent the day out with the wife at Main Street st.charles, then out to eat and got home late. While out I had to run in lowes for some hardware to hang them. Sunday, unless something pops up out of nowhere, on the tank they go. Will update then.
R

I'd recommend starting at about 25-30 percent and ramping up to your desired level over a few weeks or you'll risk a bleaching event. I ran into that when I initially switched from halides to the 300w versions of these over my 300.
Cheers,
Ray

Sent from my SCH-I545 using Tapatalk

Thanks ray for the recommendation, I will keep them as low as possible starting out.

I pulled the lenses off of mine, I liked them much better like that. I have switched to the SB reef light replacement boards, still messing with them though.

Okay, after a great day out yesterday with the wife, I finally got to work on the lights!

First, how the t5 fixture looked up in the canopy: 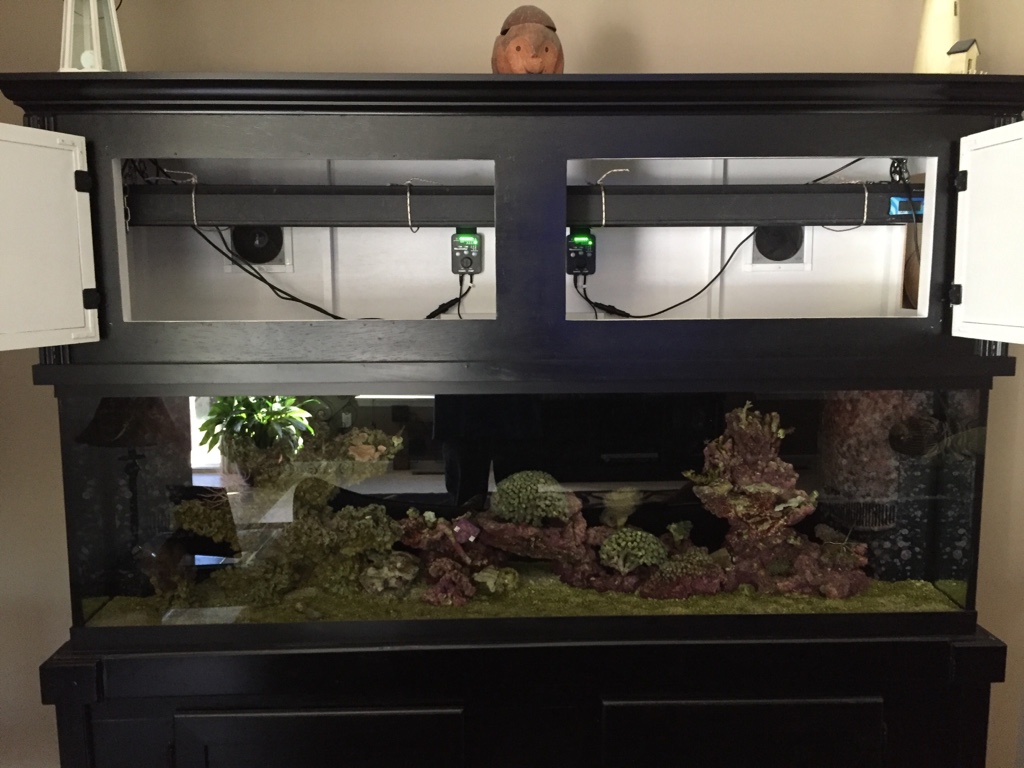 When I built the canopy, I had to modify it to allow me to get it in and out, thus making a access door: 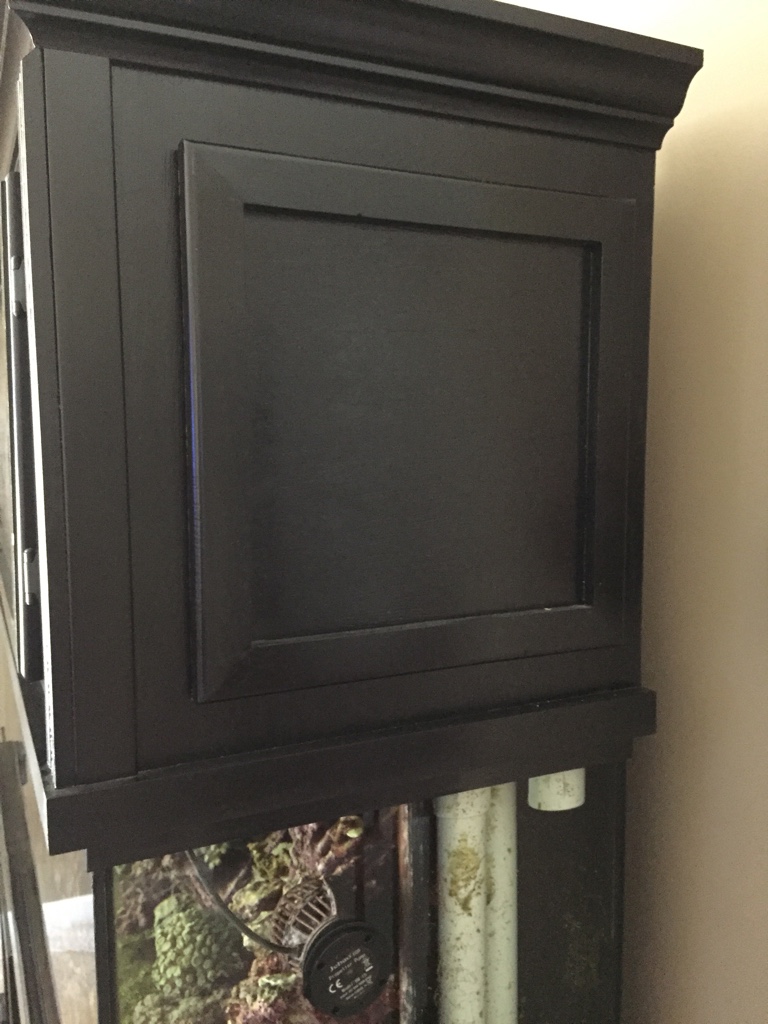 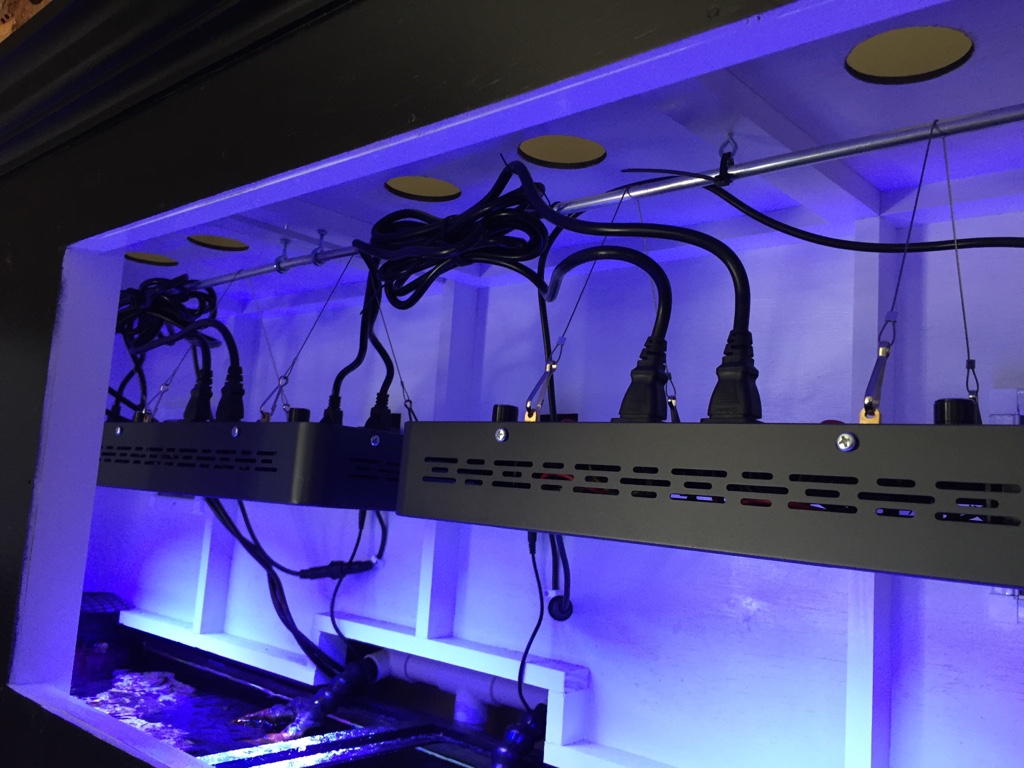 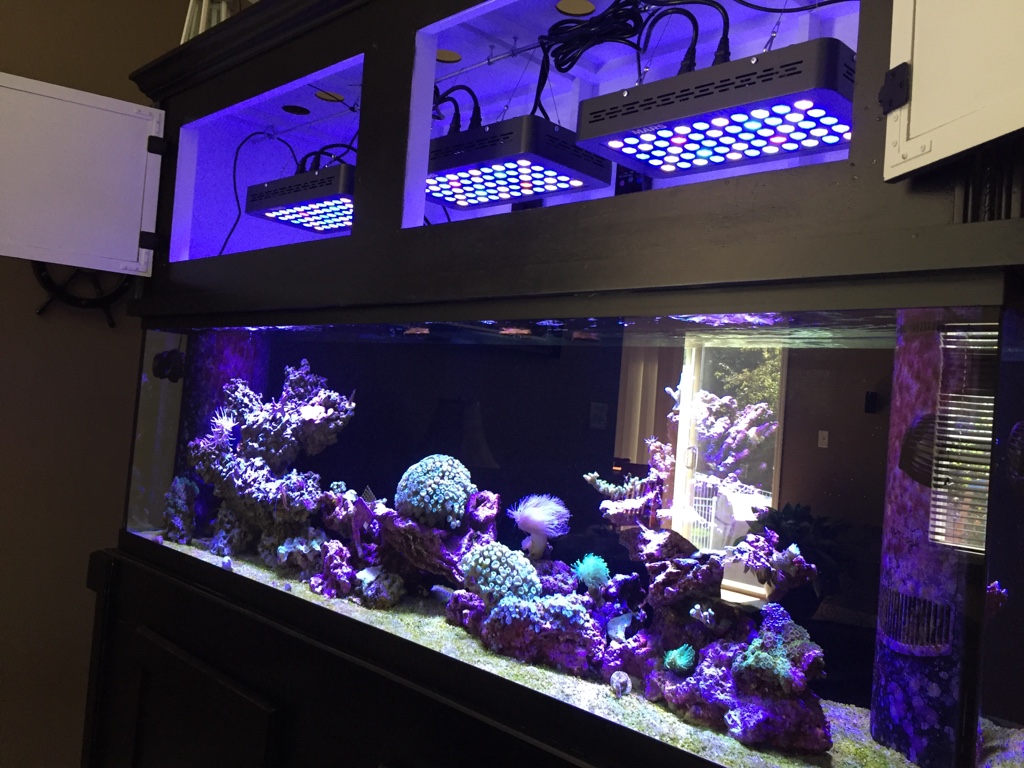 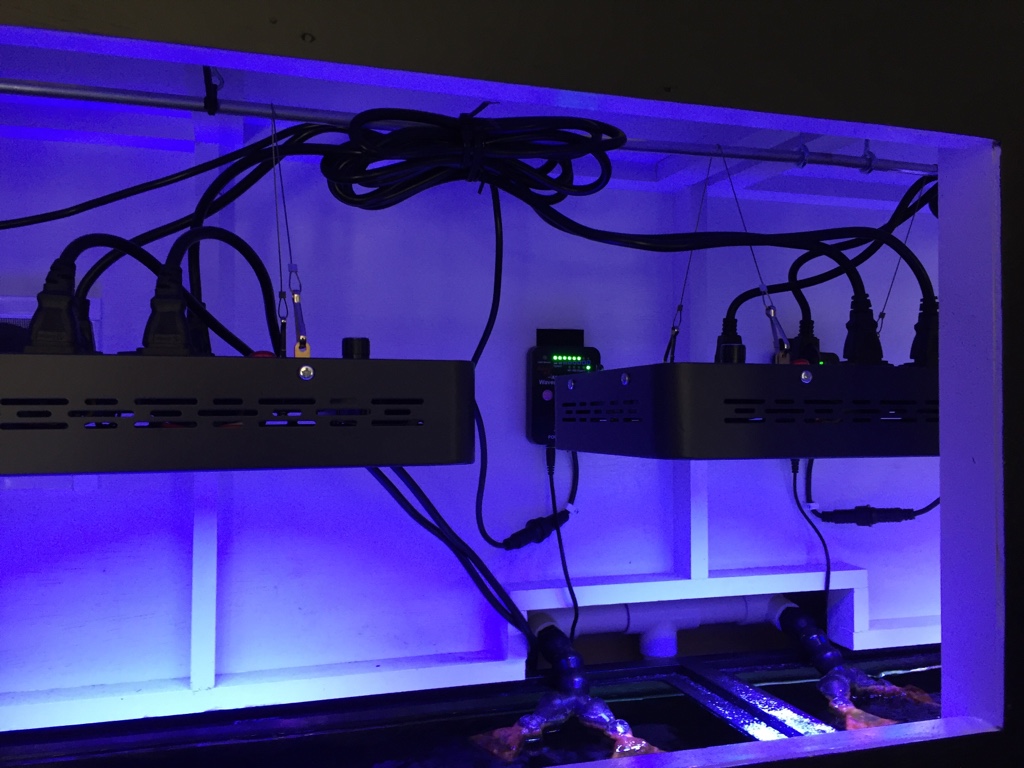 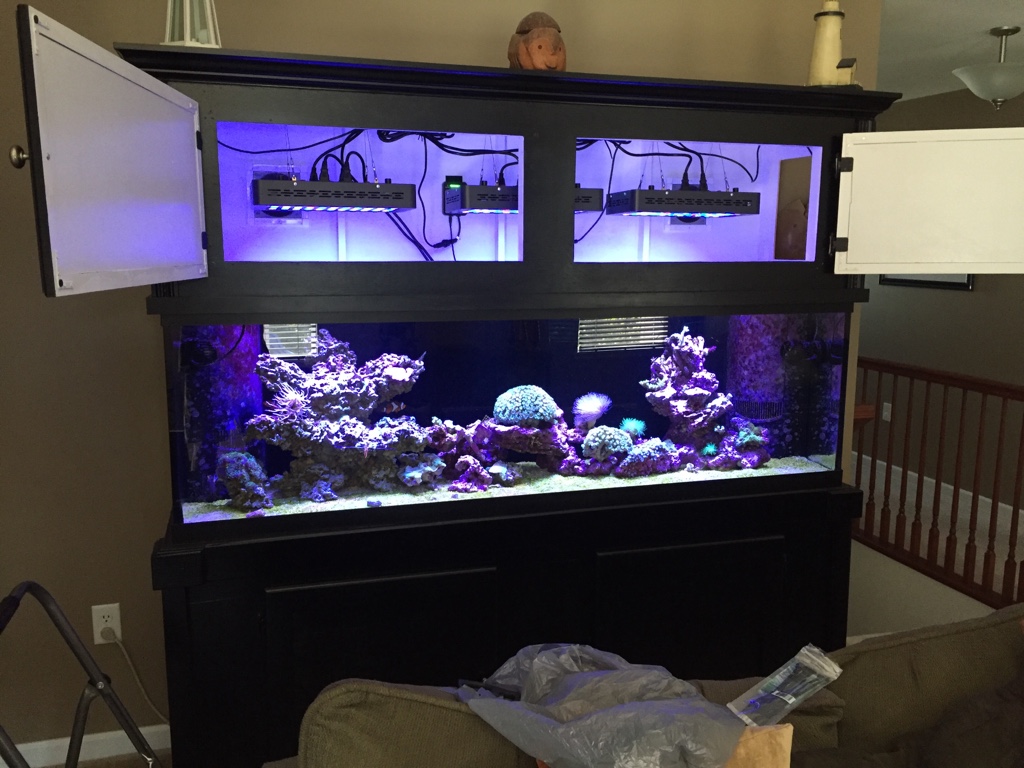 At the lowest setting, I'm already in love with the colors of the corals: 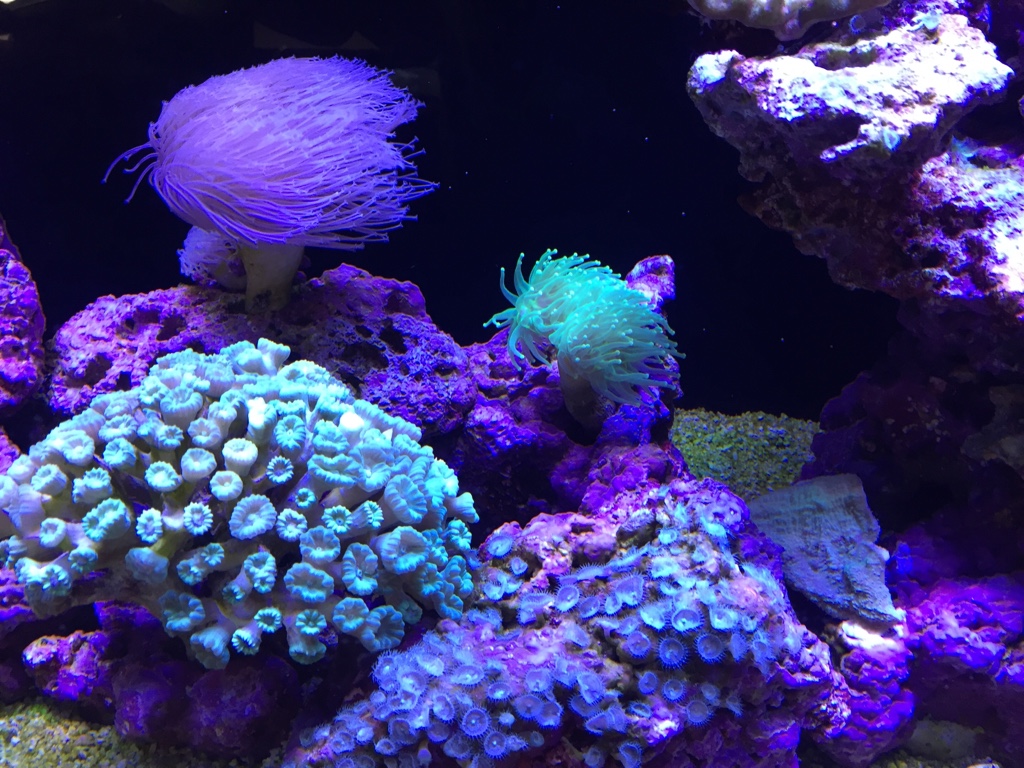 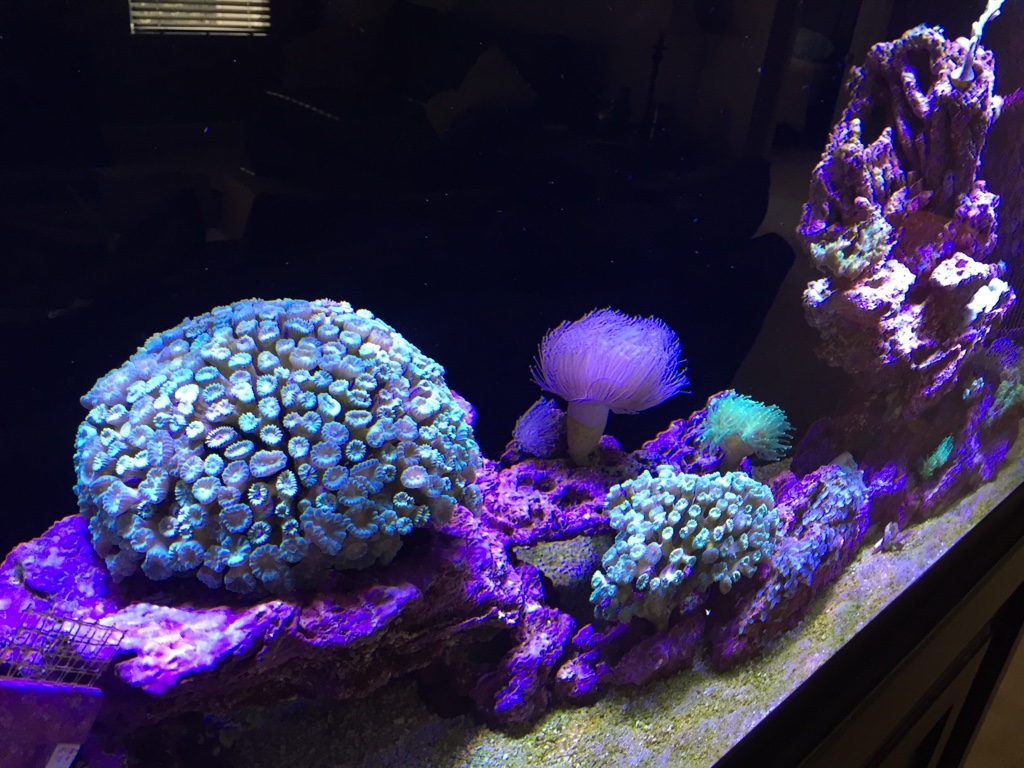 Install required using two 1/4 aluminum rods, 3 ft long and eye let bolts through the top of the canopy. From there just hung with the supplied hanging kits.

So the first impressions of these lights:

I like them very much and glad I went with 3 units instead of 2. Shadowing is minimal, due to the minimal rock scape.

Adjustability is awesome and allows for color and brightness. (T5 fixture was a pain on this aspect)

So going forward we will see how they do keeping and growing coral.

Awesome! Quick question, was the metal pole included with the light as a mounting option or did you buy that separately?

Looks great I'm looking forward to upgrading to a 90 gallon and building my own stand and canopy. I'll be upgrading to these or similar lights as well.

Thanks. The aluminum rods came from lowes.

I like em. What are you using to control them? And was it included?

Sent from my SM-G928V using Tapatalk
You must log in or register to reply here.

Anyone bought the T5 retro fit kits to add LEDs to their T5 fixture?