So this is my first post. As the name implies, I have an issue (my wife would say addiction) leaving things stock. The things I do aren't always the BEST option in the end, but it is the journey I enjoy more.

So...this is the project I am starting. I have been reefing for 4 months. I have a 46 gallon bow tank set up right now. My first tank was a 29 Biocube which I bought as a hospital tank. So now i want to turn that into a frag tank. However, the stock 36w x 2 PCs aren't enough light, I believe, to actively grow hard corals.

So, my first thought was to add more PCs. I found a gentleman who gutted his lid, because his tank cracked. So I bought the guts. I was going to wire those 2 extra lights in my lid and have 36w x 4 lights.

.....BUT then I realized that I don't have a wide enough spectrum of light. So in addition to the PCs, I wanted to build a strip of 14 LEDs that would run in the middle of the PCs, and make it a full spectrum LED strip, heavier on the other colors that I don't have (i.e. the LED strip would not make good light on it's own, it would be really weird colors).

Packing more PC's under that hood is going to lead to heat issues though.

Why not gut the hood completely and just install LEDS and a decent fan?
M

So here is the plan:

1. Gut my current hood.
2. Cut out the isolation walls for the fans.
3. Mount a piece of plexi on the previous stand-offs. (This will give me a platform to mount the new hardware too without worrying about the screws going through the hood)
4. Mount 4 sockets for 36w PC bulbs in the hood. Drill holes next to the existing holes for the power wires. 2 10K and 2 Actinic will run all off the stock switch, which should be able to handle double power.
5. Run 2 40mm fans through the original driver to cool underneath the plexi.
6. Add one extra moonlight LED, and locate them in the corners of the hood. Wires will be extended and one moonlight will be split and shared with another moonlight. All will hook to the stock AC/DC inverter in the hood. (I don't anticipate that this will be too low of a draw for those).
7. Install 2 80mm SilenX blue LED (just for fun) fans in place of the old 60mm crap fans. (these will only power on when the LEDs are on, as the other fans should be sufficient to cool the little hardware under the hood.
8. Install reflector behind the sockets and LED strip.

That is part 1. Part 2 involves the new wiring and the LED strip to boost light output.

1. Create LED strip. (will expand on this later)
2. Mount strip inbetween the 4 bulbs on the hood.
3. 40mm fan at the ends of the strip for direct cooling.
4. Wire both drivers in a project box.
5. Vent project box, install fans.
6. Install 2 potentiometers in the hood for the LEDs.
7. Gut a DC/AC power supply for the fans, and wire it in with the drivers.
8. Wire both drivers and the DC PS for the fans together to a sinlge wall plug. Grommet wiring.
9. Run all 6 wires (Driver, Driver, Fan PS) through a single hole, sleeve the cable, and run it to the hood. Project box will have a 4 foot lead to the hood, and a 4 foot lead to the wall plug.
10. Timers will turn on the Actinic lights first, followed by the 10Ks, and then the LED strip.

So this is the PLAN. Obviously, things change a lot. So I am willing to be flexible. I have tried to plan out everything in advance, so I hope this all works. My only concern is wiring in the PCs to the same switch. I don't know if the switch can handle both lights. If not, I will need to make an external switch, since there isn't room to run both switches along side the potentiometers. I am squeezed for space the way it is.
M

Packing more PC's under that hood is going to lead to heat issues though.

Why not gut the hood completely and just install LEDS and a decent fan?
Click to expand...

Not nearly as fun. Heat issue being addressed though. Its not a challenge if it's easy! Plus, this is cheaper. Bought the LED supplies for $42, and the PC guts and bulbs for $50. So its a $100> upgrade.
M

Here is what I want: (the moonlight LEDs will be replaced by the LED strip. The strip will be in the middle of the 4 bulbs though..not offset) 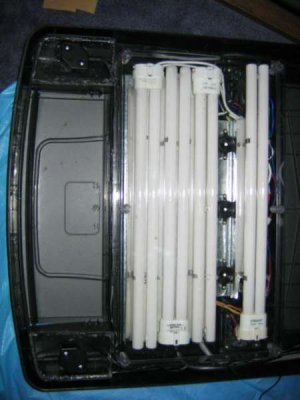 Here is a crappy MS Paint schematic of the layout for my hood. Please forgive my creation of the plan on a slab of stone with a chisel. 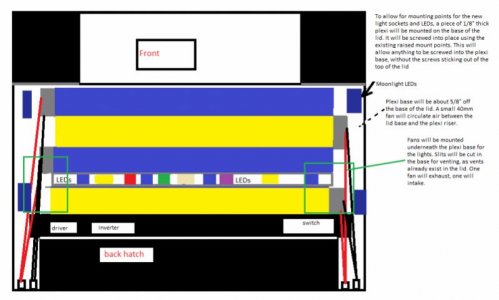 All cooled with 2 80mm SilenX fans, 2 25mm (seriously small!) fans, and 2 40mm fans. The smallest fans will be mounted vertically on the ends of the heatsink for cooling. The 80s are exhaust/intake for the hood as a whole, and the 40s will blow over the LEDs and the 4 39w compacts directly. All covered in a plexi shell. Compacts on the original switches for the hood, Moonlight LEDs always on like stock, and the potentiometers I am hoping to drill and mount into the hood if I can find room. If not, I will mount them to plexi and make a slight bulge extension off the hood so they are mounted that way. I will try to keep everything except the drivers in the hood at all cost. The drivers will be in a project box which will be cooled by a 40mm fan on the floor with a 6ft. lead wire extension. Those 3 leads will all be sleeved in Bitspower 1/4" sleeving with matching heatshrink to make it look clean. (I built computers before this, so the wiring aspect I am super picky about)
M

So here is what I have so far. I started out with this strip, but it was only wired for 6 LEDs, so I just used the back. 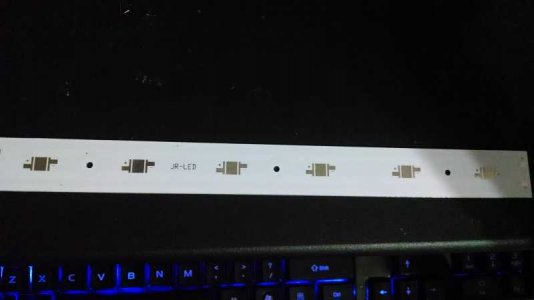 LEDs all wired up. The bottom row are the blues and UV, and the top is the whites, reds, green and pink LEDs. The bottom blue LEDs have 90 degree lenses on them to create a heavily-concentrated blue light area for demanding SPS corals. 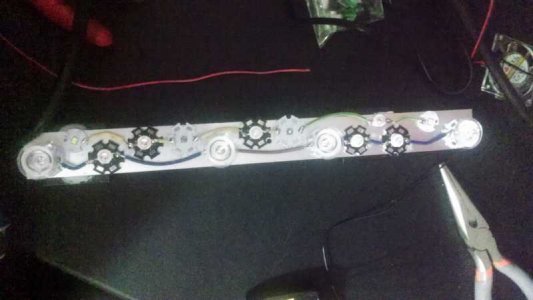 Heatsinks for the back were expensive when they were 10" long. So instead, I just bought a bunch of smaller sinks and mounted them to it. 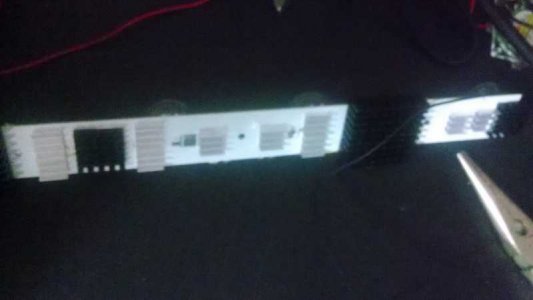 Now, the box. I am installing the drivers and DC inverter for the fans in a peoject box that I can leave on the floor. This saves space and reduces the heat created under the hood. I used a wiring block to wire the wall plug (removed from an old carpet cleaner ) wires to the 2 LED drivers and the DC inverter. 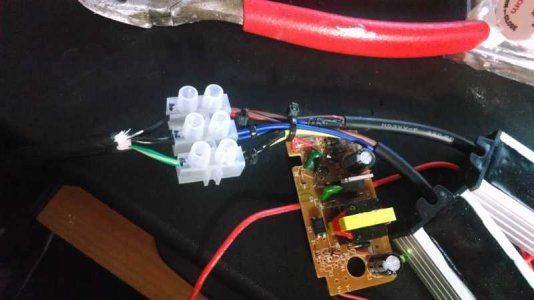 I then grometted the cord coming in. 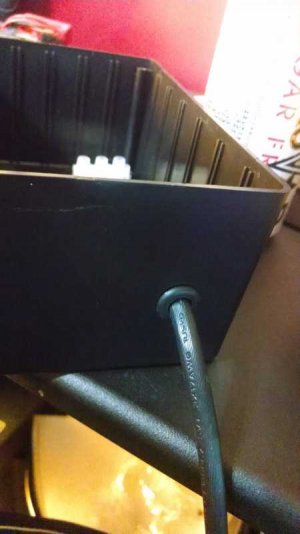 I also have done some work on the hood itself. I gutted the hood, and cut away the walls surrounding the fans. I have installed the 80mm HO SilenX fans, and I cut my plexi base for everything. This allows me to drill right into the plexi, without having screws go through the top of the hood. Also gives me a place to vent heat and remove it. The blue plastic is just the cover over the black plexi. The 2 power ballasts for the extra PCs are already installed, I just didn't take a picture yet. I will post that later. 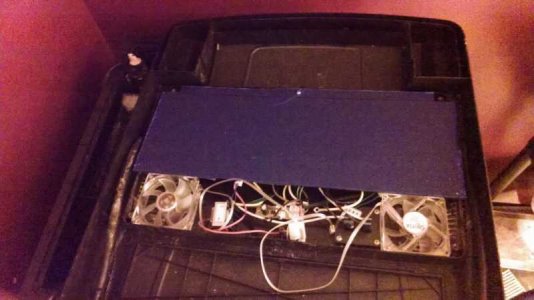