My 180g tank: The beginning

Hi everyone! Just wanted to start a thread to show everyone how busy I've been lately with my new project. It sort of came about all of a sudden about a month ago so planning in still in the works as I don't expect the whole tank to be fully done or quite some time. I finally caved in and bought a 180 because one of my coral tanks started leaking and another 55 gallon had its cross brace broken in half mysteriously. Here's a pic of the damage:

The tub with my sps and clams: 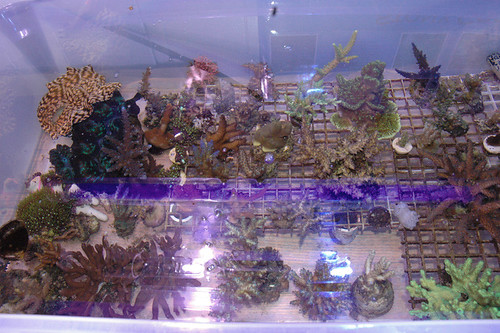 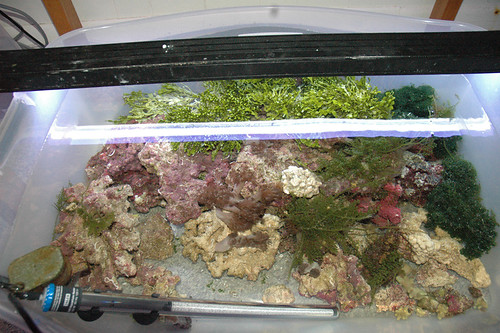 So what about the tank you ask, well I'll tell you. I just went and got it today. I drove 3 hours each way to Columbus, OH to meet the truck in the back of a waffle house, lol. Well here is everything, mind you I'm only a college student on a tight budget here.

40 gallon breeder All-Glass sump, I know bigger would be better,
but I already had the tank. There will only be two baffles and
a large area for a refugium. I have never had problems with
either of the skimmers producing microbubbles.

DIY PFO Reflector with 2 SE MH's, mind you only about half of the
tank will be lit until I save money for 3 Lumenarc III reflectors
and the extra ballast and bulb.

Pan World 200PS @ 1750gph return pump dialed back a little.
1200gph after head loss which is a little less than what the
skimmers use.

I have about 100 lbs. of Figi and Marshall Island LR so far, will cure
more later to add slowly to the tank.

I have 300 lbs. of southdown sand, but I plan to use much less for a
SSB

Pumps, yes the pumps... This area I need help with. Not sure what
brand or specific type I want yet, plus I still need the money.
I didn't drill the tank for a CL so I will need some pretty strong
powerheads.

I plan to make my tank into an sps reef with a medium fish load, but mainly to allow the sps to grow out nicely.

Oh about the stand. I am currently building the stand myself. I decided to use 2X4's because they will provide plenty enough strength if built correctly. So I hope I'm building it correctly. The plans are similar to what Rocket Engineer has posted in his thread here:
stand plans

My stand is much longer though so I had to add three support beams in between the corners on the front and back and I added 3 cross braces on the top frame and one on the bottom.

Heres a pic of just the frame without the corner supports:

that will be awesome when complete.

So since yesterday I've been building more of the stand. I plan to put trim around the three sides and on the bottom for the sump and a sheet of plywood on top. Its not going to be too fancy just a plain normal looking stand I guess. Here are some pics of it last night:

And some pics of my new tank: 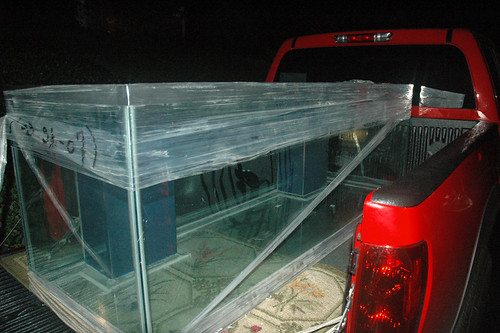 One big problem will be moving this beast. We have to return the truck by monday so the tank has to be in my basement by tomorrow night and I have no one really to help. Just me and my dad and maybe another friend.

Looks like your off to a great start. Can't wait to see more progress.

Thanks deansreef and yoboyjdizz. There's a long way to go until its going to be great, but it will.

I finished the frame for the stand tonight. I'll post some more pics later. I plan to take the whole stand apart and spar varnish it. Then put the tank on the stand somehow and do the trim separately.

I am going to get the sump drilled tomorrow also and I'm going to put the baffles in too.

You can probably eliminate the center vertical 2X4 for access. My 210 sits on 6-1X3's (commercial stand).

That is a good point Pmolan. I've heard that you shouldn't have more than 2' in between the uprights, or was it the cross braces, I forget. I'm sure I can access the sump and stuff in the stand with four doors on it. The sump is going to be offset anyways. I'm sure it will be sturdy enough, so I might just take the middle upright out anyways.

About the stand, how will you get a sump and/or large equipment under there? I would either put a door on the left or right end of the stand or reposition the braces in the front so you will have plenty of room to put something in there.

As far as closed loop, have you considered over the top plumbing?

<a href=showthread.php?s=&postid=10483994#post10483994 target=_blank>Originally posted</a> by davidryder
About the stand, how will you get a sump and/or large equipment under there? I would either put a door on the left or right end of the stand or reposition the braces in the front so you will have plenty of room to put something in there.

As far as closed loop, have you considered over the top plumbing?

As far as putting the sump into the stand, it will go in through the sides and the side panels will be removable or I may just put doors on them in case I need to take the sump out again. I measured and it fits perfectly into the side. There will be plenty of room on the sides and over top the 40g breeder for extra stuff like the skimmers, phosphate filter, and calcium reactor i I get one. I can't really take out the middle upright because then I wouldn't have an upright every 24'' because of the way the cross braces were put in to accommodate the overflow holes. The stand itself is 36'' high which leaves about 30'' inside the stand.

I haven't really ruled out a closed loop yet, but it would have to go over the top. I just don't have an extra pump nor do I have money to spare.

I just moved the tank into the basement today with help from three other people; it is darn heavy! The hard part will be to move the tank on top of the stand once its ready.

I also put the plywood on top of the stand today and am drilling the holes or the overflows as I'm typing right now. More pictures tonight. What kinds of things do people want to see exactly so I can post more pictures of what people want?

I'm getting a vortech on friday along with another 50lbs of LR so I should have 150lbs total. I finished spar varnishing the stand and screwed it back together tonight. I also drilled the holes or the overflows on the top plywood. The trim and side panels and doors will go on after the tank is in place and the tank is on top.

I got the sump drilled at a LFS nearby and just need to silicon one glass baffle into place. I don't have any bubble traps in place and hopeully won't need them, I've never needed them before. There is an area for the skimmers and then the refugium and then the return section. The return section is not too big because I plan on getting an ATO.

I plan to add another 20 amp breaker and add a GFI outlet near the wall where the tank is going.

So here are some pictures: 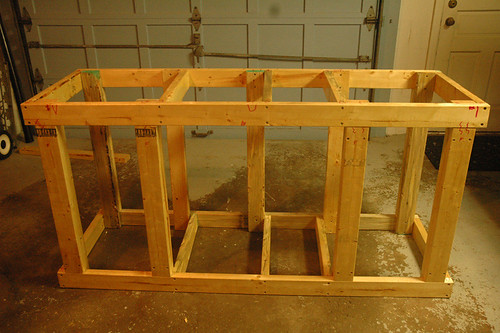 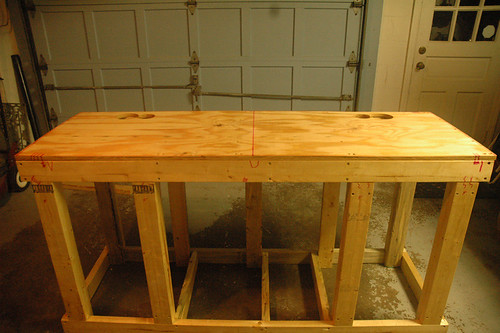 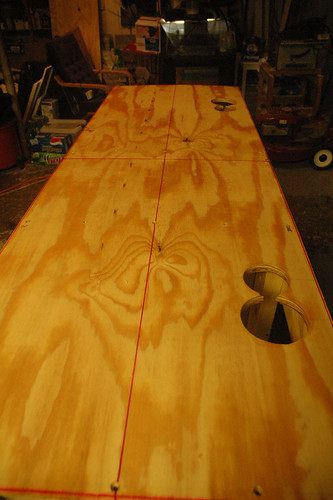 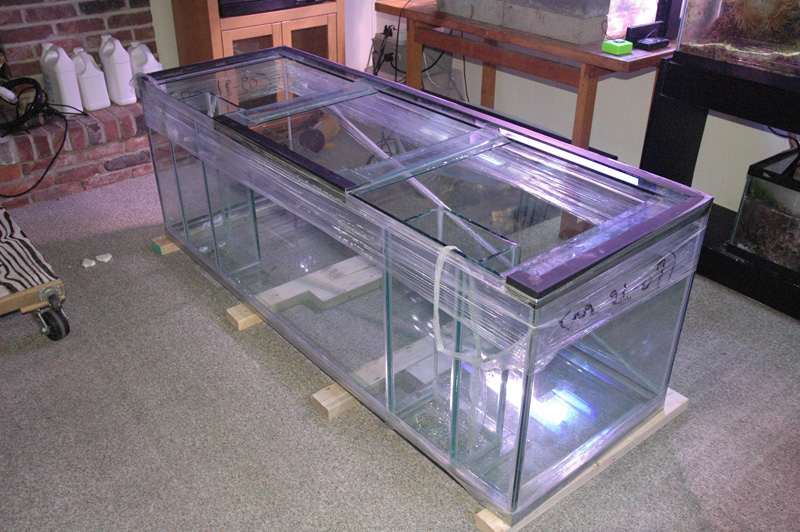 I also took out the middle upright do allow for a large door with a big opening in the front of the stand for access to the sump area.

I plan to mod some koralia 4's to add extra flow to the tank along with the vortech.

I will also be building some durso standpipes and add lockline to the outlets.

I just had to subscribe to this thread so i can see what you do with this setup.

Thanks, the new LR should be arriving very soon as in this afternoon sometime along with my new vortech pump. So far the money spent is about $2520.

Well I got the tank onto the stand frame and am now plumbing the system. I am also finishing off the trim. Here are some more pics o the tank, plumbing and new Figi LR. 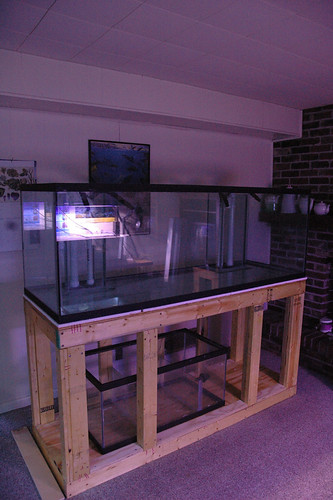 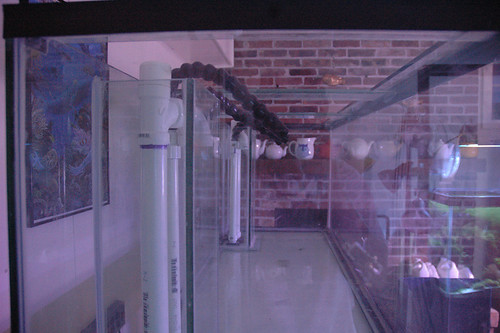 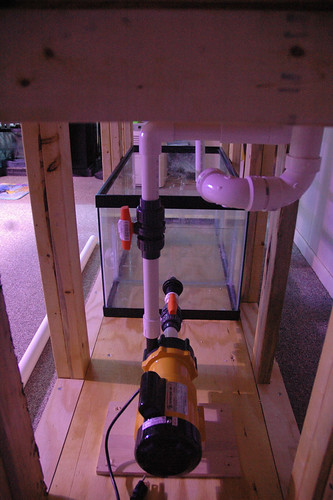 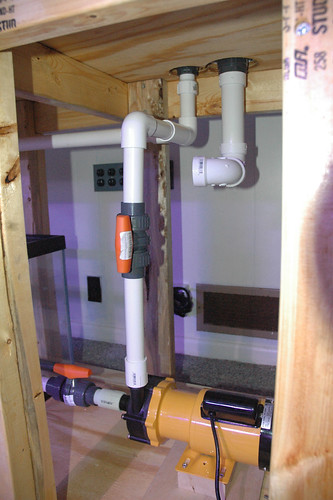 I would try to stay away from 90 degree angles on the return pump, i would rather use 45's instead.

I thought about using 45's, or I wish they made 1'' long sweeps, but I don't know if I would have enough room. What will be the problems if I use the 90 elbows? I'll loose some water flow due to increased pressure, but that shouldn't be too much of a problem since the return pump is probably going to have to be toned down anyways. I believe the elbows are ar enough away from the inlet and outlet of the pump so that there's no cavitation.

Yeah, it would put a little pressure on the pump but in your situation of it needed dialing down i don't think it would hurt.
You must log in or register to reply here.