My method for silencing overflow for tanks with small overflows

Well, I was working on all different methods to silence an overflow for my 75gal tank with a good sized return pump (800gal/hr return pump) . As all of us know without any modifications, the overflow sounds something like a waterfall. I tried many different methods to silence it but nothing worked right.
I wanted to use Herbie's method as that would be the best, but since my tank was bought without any customization, there is only 1 overflow and no way to add a 2nd overflow hole to allow for the emergency pipe.
then I went with the Durso standpipe which also wasn't working right. First I tried the holes, but since there was no room in the overflow box to put a 1 1/4" or larger setup, I had to go with the 1" which is the same size as the overflow piping. I tried hours to get it dialed in, but no matter what I just couldn't. Then I read somewhere by using an air tube placed into the pipe, it would work. Well, it did and it worked well but I came across a huge problem. While I was working on the sump I turned off the return pump, did some work and turned it back on. I then noticed that the durso overflow mod with the air tube would not prime! So what next happened was a small overflow before I was able to remove the pipe and let the overflow drain out. There was a simple fix fir this - keep the airline tube above the T but below the top of the tank. What happens when the water gets high up is that it will siphon into the air tubing, prime it and then continue working. I also attempted the power failure scenario with the durso original mod, but it just completely failed. In addition neither method was that quiet.

so without wanting to risk any option of failure and the general rule being K.I.S.S. I went ahead and took part of the durso setup and modified it. The 1 1/4" pipe does fit in the overflow and I used the 1" to 1 14" reducer and made the pipe height a few in below the overflow slits. I then cut some horizontal slits into the pipe. What happens now with having a larger opening is that the water does not cause a possible overflow of the tank (there is nothing to prime, no holes to worry about, etc) and there really isn't any gurgling noise nor that waterfall noise. In addition it isn't any louder than the durso mods I've tried on my tank.
I hope this might help some people. 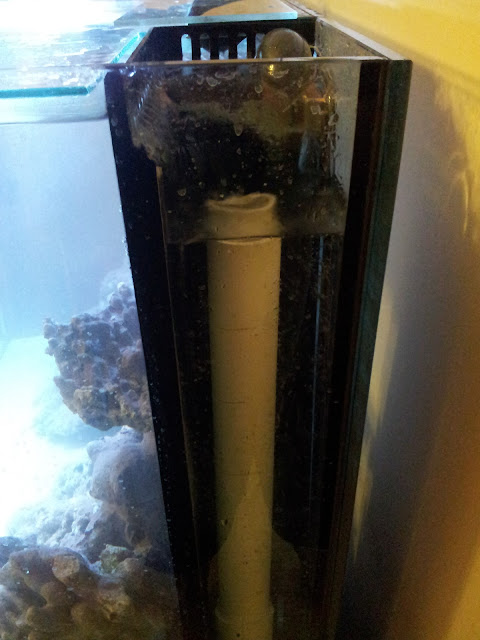 Premium Member
Take a look at the megaflow piping, you have a modified version of it, but theirs is a lot safer.
P

From what I can see megaflow piping is the same as durso.

I can only find one thing unsafe with my setup - a snail can get lodged in or some other sort of animal. I got some protection. First, the slits in the overflow. Next a piece of glass on top of the overflow making the slits the only way into the overflow. Third, I will be gluing to the top of the pipe a piece of egg crate. That won't obstruct the flow, and it will prevent any snails, crabs, etc from falling in.
Problem solved.

Premium Member
What happens when algae or biofilm reduces the airline inside diameter or clogs it completely? Yes it is very close to the Durso, eliminate the airline being fed the way it is and you won't have problems down the road.
P

sirreal63 said:
What happens when algae or biofilm reduces the airline inside diameter or clogs it completely? Yes it is very close to the Durso, eliminate the airline being fed the way it is and you won't have problems down the road.
Click to expand...

Ah, your talking about the durso with airline. I'm talking about the new setup I have in the photo - just a tube with a open top. There's no airline in there. All the air gets sucked with the water in the top.
It's also easy to remove out of the tank and clean, or just build a new one. All it is is a 1 1/4" pvs pipe, 1 1/4" to 1" reducer, 1" pvc pipe as a connector and that's it.
You must log in or register to reply here.

Feb 9, 2022
blowmecius
B
R
Can I mod Durso to Herbie with this configuration?
2