I have somthing in my 75 gallon reef that is causing all sorts of trouble. Recently corals have been eaten or picked at (green slimer frag, purple monti, green monti, nepthea, frogspawn). I have also mysteriously lost a 6 line wrasse about a month ago (I added it and saw it the day i put it in and the day after but not since then) and last saterday i added a pink bar goby which is doing great with his pistol shrimp buddy and a yellow head jawfish. I only saw the Jawfish the moment I put it in the tank and then and i went into the rock and i havent seen it since. Its oviously not levels because the corals are being picked at or moved and none of my fish pick at any. My livestock is one true perc, two cromis, pinkbar goby, 2 banggai cardinalfish, royal gramma, cleaner shrimp, peperment shrimp, pistol shrimp, astera snails, trouchus snails, cerith snails, and a few nassaris (they have been dissapering too). I got rid of all my hermits in my tank and corals have still been picked at. A while back i put in three emeralds but i havent seen any in at least six months (i had some nitrate, nitrite and a little ammonia then). There was also this ugly kinda, fuzzy crab with red eyes that ws in there but i caught him a couple months ago and threw him in the sump but then about a two ago i thought i saw him back in the tank but not since then. Is there a way he could have gone over the seperators in the sump to the pump and into the tank? I have no idea what to do or even what it is. ANy help would be very much apreciated, Thanks!!!
H

There are some nasty huge red worms that can cause all sorts of trouble and death. Have you ever seen anything like a puddle of mucus? These worms do weird thing with mucus. The crab is probably another one of the same type that has grown.

If it could be a red worm try this,,, feed only lightly for a couple days, to help make sure it is hungry. Place a small bit of fish or shrimp under something against the front or side glass wherefish will not get it. Then use a red light at night and watch. Check back about one time an hour. The worm I am talking about can get over 3 feet long, but is always narrow, about as thick as a pencil.

I am sure someone will post the name of these worms so you can check it out. If it is, then people have made up all sorts of ways to trap them. Good luck.

Staff member
RC Mod
It could also be a xanthid crab. Bait a tall, smooth sided glass with a piece of raw seafood and tilt it against the rockwork. Xanthids are generally nocturnal so you may have to try a few times at night. I caught mine the first night.

Is this the mucas you were talking about? 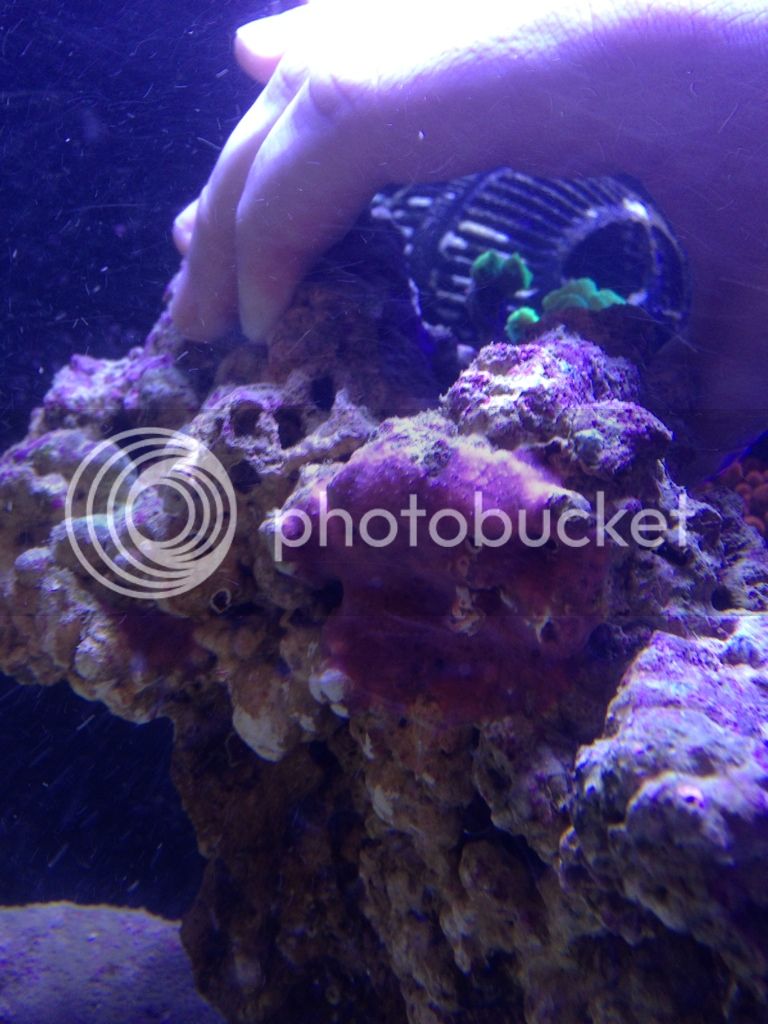 I've seen it for awhile but I have no idea what it is. It's on the underside of a rock. The weird thing is that I haven't seen the crab and I used to at least every other week. I tried the glass trap actully but my shrimp got the food. I also saw the chromis go in there to eat, lol.
H

The mucus looks and feels like snot. I can not tell what the picture shows, but if mucus like stuff has appeared it is even more likely to be one of these worms. Look up threads on "flugida worms"

They use the mucus for something or other. They line nests inside rocks with it, and I have witnessed them using them as traps. They put the mucus out on a rock and wait for a snail or other creature. Search for that term and browse the threads.

A worse case is a related worm, "Eunicid worm" and it is very very dangerous to a reef. That one is less likely, but can and will kill even large fish and very well may bite a person with razor sharp jaws. Well, if it has to be a worm, hope for the first one.

You may very well have found it house, if the mucus stays on the same rock.

If you spot a long worm, I think an easy way to tell the difference (could be wrong) is the flugida is easily spooked. The slightest movemnet or non-red light will send it running. I hear the eunicid worm is a tough aggressive thing that will be much less likely to flee for its life.

Actully I did see a Red Eunicid worm in my sump a few months ago which was sucked up by a pump into my display and I caught it and flushed it because i wansnt sure if it bad or not. I'll find a red light and look tonight.
H

There you go. I bet that is it. Try to find out if it goes into a certain rock. A lot of people have come up with traps, but they may not work. The only sure way i have heard of is remove the rock that it is hiding in and give it a hypo or hyper saline dip. read a little about dipping rocks in hypo or hyper saline. I assume you can do so with some coral, and not others. I see a mushroom on that rock. I guess you could break the rock to remove anything you could not stand losing.
Good luck.
Placed in either solution the worm will jump straight out of the rock into your bucket and can be flushed.

Ok so I've started reading and I read that they wont eat corals when they are young but will as they mature. I also read that they won't come out of their holes, I'm not sure if that's only as an adult but I moved my frogspawn to the opposite side of the tank and its no longer being picked on. That would make sense if that red stuff is its home. I read of people putting club soda in its hole and it popped right out.

Well I didn't have a red light so I took a regular light bulb and put red wapping paper around it and its making a nice red light. I'll see if I can spot it
H

Hmmm, the red stuff is actually a sponge colony unless my eyes deceive me. He will be in one of the rocks so just find out which. Maybe club soda would work, but some members say it did not. I know dipping the entire rock will. I think this can be done and it will not harm most things, but read up first, of course. Great idea with the light bulb. I do not have a red light, so i like the idea.

I would have my eyes out for a sneaky little crab. It will likely only sneak around at night.
C

Could be a worm or a crab. If you are sure the thing you caught was a eunicid worm, then that may very well be your culprit
O

I had one of those bad worms. Not a giant one, but I started seeing mucus lined burrows appearing on the rocks leading to corals, then big chunks eaten out of the corals during the night. I was able to track it down due to the particular rock it was living in (you can tell from the mucus burrows it builds). Fortunately I have a nano and I was able to take that rock out. I tried flushing it out to no avail. Finally I had a midnight rock smashing event in the garage with a hammer and chisel and found the little sucker. He was bristle worm sized but definitely different. The head was squished during all this so a positive ID was not possible. This was a day after spending 2 hours sitting in the dark next to the tank in the middle of the night looking for the worm to show its ugly head (which it never did).
It was after all this that I realized I had become a reef tank nut!

Well I've had no luck at night but during feeding today I saw the ugly fuzzy red eyed crab for the first time in in a long time. I'm pretty sure I know what rock he is in so I'll set up the glass trap. I'm just worries the srimp will eat all the food/bait again

Can xanthid crab actully eat fish? I have lost a fire fish, six line wrasse and I think a yellow head jawfish. On think about all these fish is that they like to swim in rocks so maybe???

I caught the horibble thing last night!!!! A piece of raw chicken and he was right in the cup.

fish clown said:
Can xanthid crab actully eat fish? I have lost a fire fish, six line wrasse and I think a yellow head jawfish. On think about all these fish is that they like to swim in rocks so maybe???
Click to expand...

Yes, they get them while the fish are sleeping. The one I had ate two ywg and a yasha goby along with countless snails and hermits.


fish clown said:
I caught the horibble thing last night!!!! A piece of raw chicken and he was right in the cup.
Click to expand...

Glad you finally got it!

Now lets hope there was just one in there

fish clown said:
I caught the horibble thing last night!!!! A piece of raw chicken and he was right in the cup.
Click to expand...

No pics? AWWWW!
You must log in or register to reply here.