For the past couple months or so I've been planning a 37g seahorse/reef tank. I had two tanks going, a 12g nanocube and a 10g dwarf seahorse tank, but keeping them going along with a couple freshwater tanks just was too much. I'm setting up the 37 to be my only salt tank (I'll keep the nanocube until this tank is cycled, then I'll transfer the livestock and sell it) so hopefully I'll end up with less work than before (that is, after I set up it lol). I've already broken down the horse tank and I'm relocating the sh I have, the 37 will hopefully hold a pair of h. erectus, h. reidi, h. kuda, or h. comes (which will take less time to care for then the dwarves)
So far I don't have much of a plan, I've already got the tank, a PC light fixture, some egg crate for the rock structures, and I'm waiting on a coralife super skimmer. Here's what I have so far:
-37g with a sump/fuge (either 20, 20T, or 29)
-2 rock structures resembling http://reefcentral.com/forums/showthread.php?s=&threadid=1188352&perpage=25&pagenumber=1
-SSB
-livestock-> pair of seahorses, a couple SH safe fish, zoanthids, gorgonians, mushrooms
-18g sterilite bin NSW holding tank, pvc frame around it to prevent bowing

I haven't started thinking about plumbing yet, since the countertop this is going to sit on has not yet been built. I have been thinking about what kinda overflow I'll be using. This tank will be in my room so I need to use the quietest overflow I can make. Originally I was going to go with a corner OF made from 1/4 of an 8" diameter pvc pipe, but I think that might be too noisy. What should I use?

As you can see I've got some cleaning to do, I've been scraping off the old black paint so I can repaint it.

Premium Member
i don't think a corner overflow would be noisy if you put a durso standpipe in it.

basically like the kits that Perfecto tanks come with or that you buy to add-on to AGA or Oceanic RR tanks. Of course all of those have the bottoms pre-drilled, which probably isn't an option for you on that tank (probably tempered)...

But you can drill the back and DIY a durso that fits inside a corner overflow or a durso that is outside the tank with a standard overflow made from glass that you can silicon to the back wall of the tank.

Check out twinpanther's build thread for an example of the latter.

I've always wanted to set up a seahorse tank, but the feeding worries me. We go away for a week to the Adirondacks each summer, and I don't have a daily "tank sitter" who could come.

I think I'll make a standpipe then if I can ever find a length of pvc that's big enough to make into an overflow.

I don't have a problem with the feeding, for the past year I've had the dwarf seahorses which I have to feed live brine at least once a day, feeding cubes of mysis daily will be a nice break lol

Just curious where do you get your seahorses from? After looking at Mark Klier's tanks with SH and Pipefish I'm curious about them now. Yet I am still concerned about the feeding as Scott mentioned above too.

I know of a couple CB suppliers in the US, I also know someone around here who breeds or used to breed them (kuda and reidi). Either I'll buy from those suppliers or I'll just pass on the horses and see if I can find any pipes, I really don't want to end up with wild ones.
I was hoping Mark still bred them but I didn't see any fry and didn't see the genders of his horses either lol.

If youre looking into horses there's a bunch of things to consider, ie they don't like high flow, they need lower temps, some fish and inverts are unsafe with them, and some corals can't be kept with them (either they'll hurt the horses or the horses can hurt them).

This tank is still in the works, I can't believe it's already May!!!
Awhile ago I got a Coralife PC fixture and a 2' section of 8"PVC (thanks Josh!)
I also almost finished the rock structures, and now I just need to get some resin and CC to cover the exposed foam.
I was planning on curing the rock structures in a plastic bin with some LR while I work on the cabinets and countertop that it'll sit on, however the way things are going I'll probably end up curing them in the tank after I get it set up.
The seahorses probably wont be in order until a year from now I'm guessing, unless I can get a job this summer 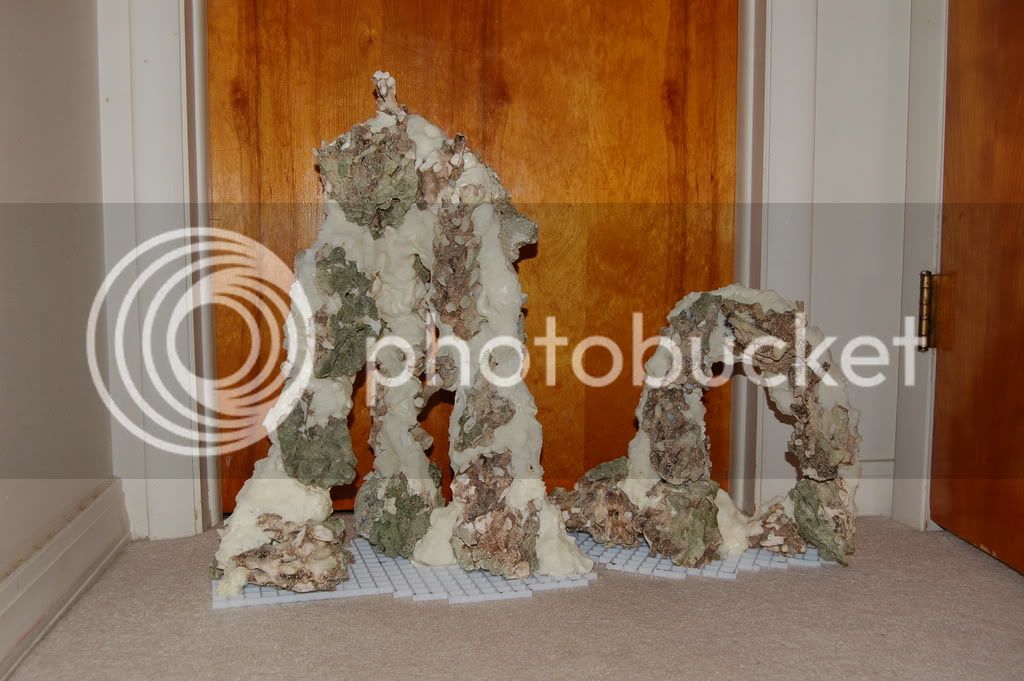 nice, is that the same rock you got from me? very nice work with it. That should be very cool looking when its all finished and in the tank.

Yeah that's the rocks that I got from you, I didn't end up using the man-made ones, including that big one. If you want you can have them back, ll they'er doing is sitting in my room collecting dust and giving me a reason to set up another tank lol...

Looks like I can epoxy the things this weekend, my dad's friend who's into boating told us where to get some marine grade epoxy resin, and I'm picking up some cc too.

Alright I got a lot of catching up to do, I just finished the rocks and my dad and I have started building the stand for the tank, which is 1 out of three sections of a wall-length cabinet coutertop thing.
Here's the rocks after the first coat 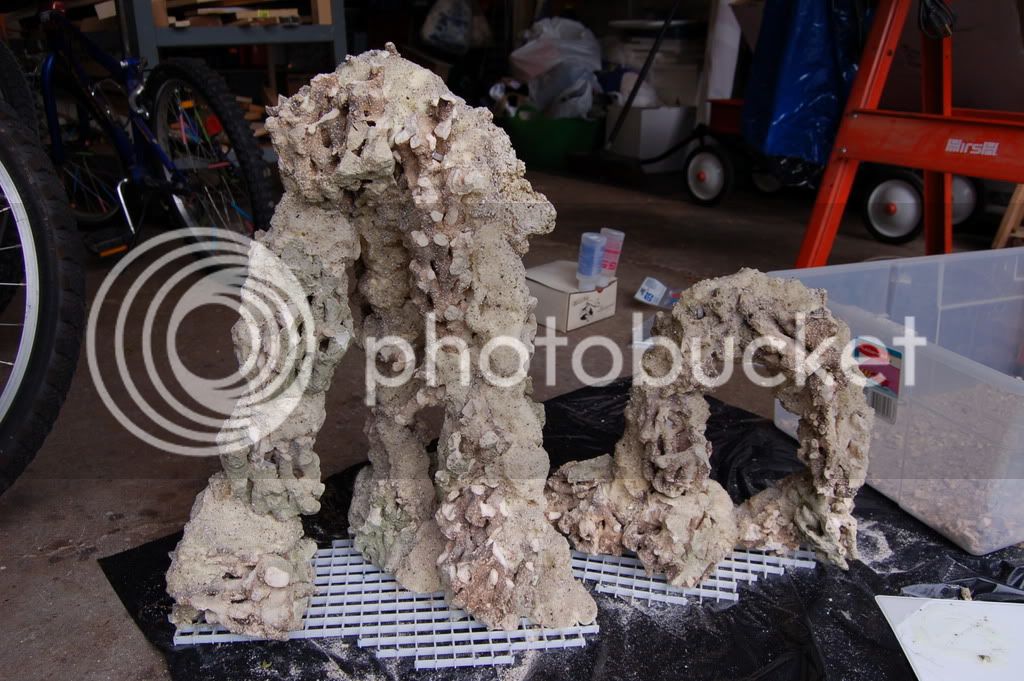 After the 2nd coat: 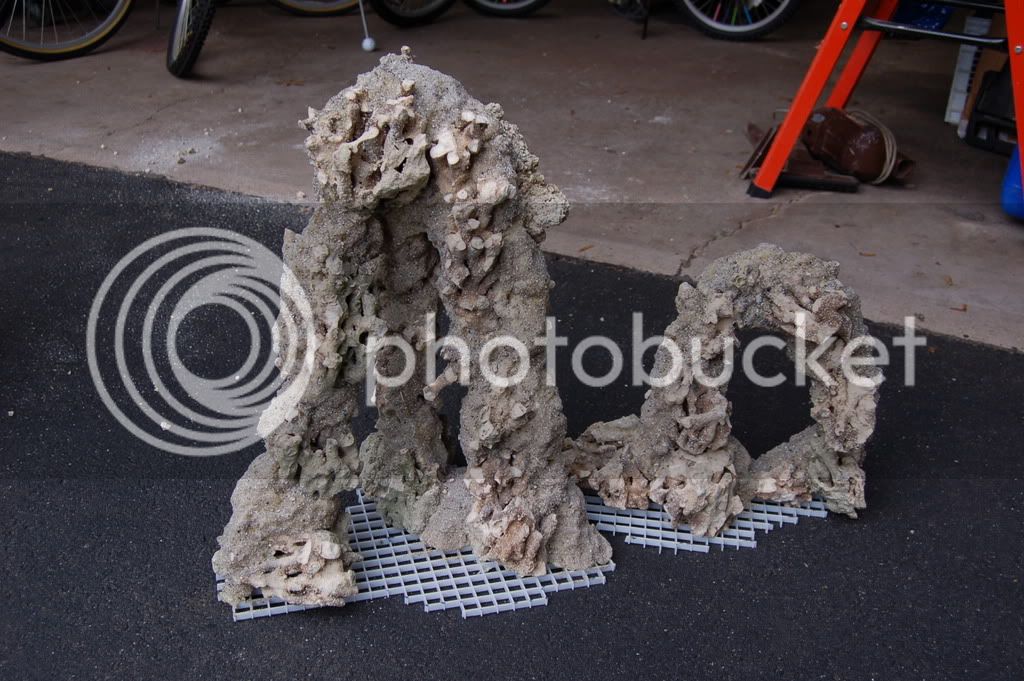 The epoxy I used, if I had had more $$ I would've bought the actual epoxy, this was technically epoxy adhesive (my fingers keep trying to type expoy for some reason :huh: ) 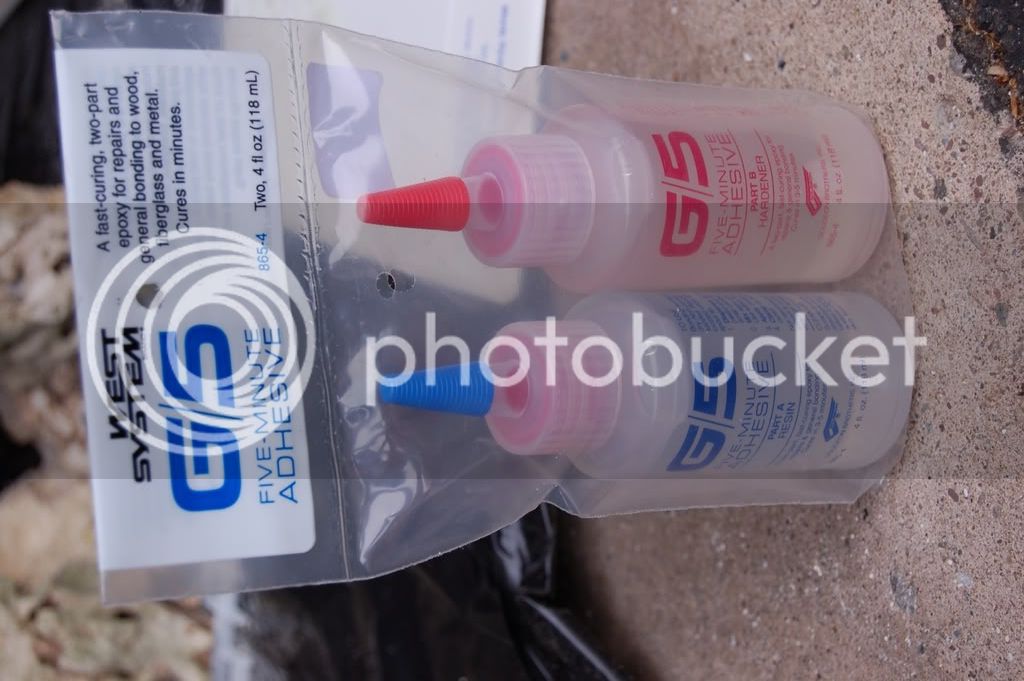 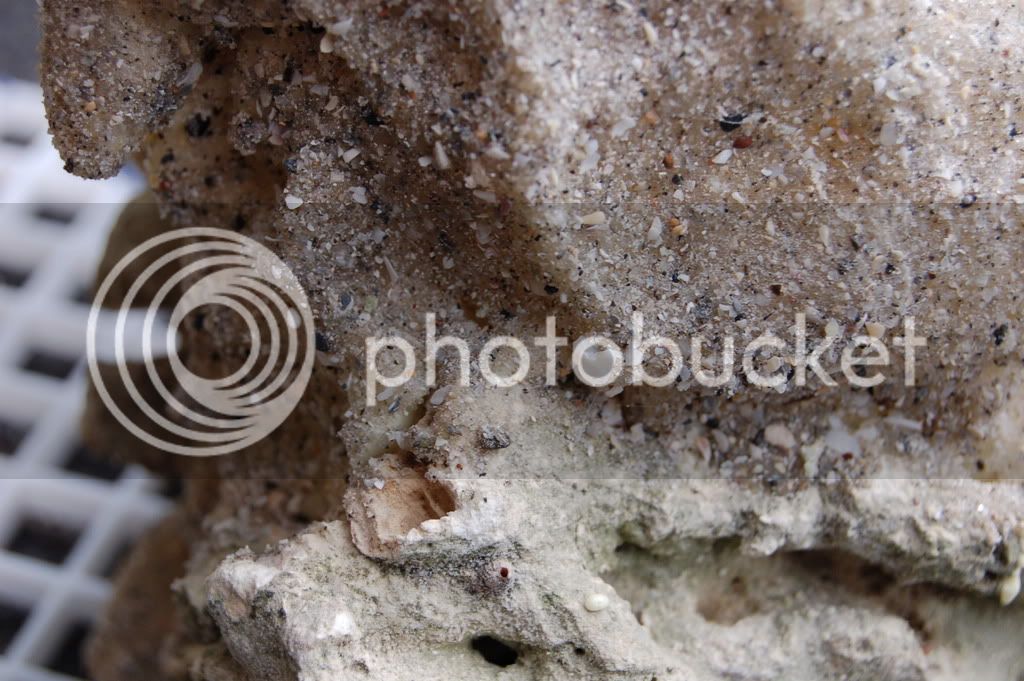 top down, it's less than 12" front to back to fit in the tank 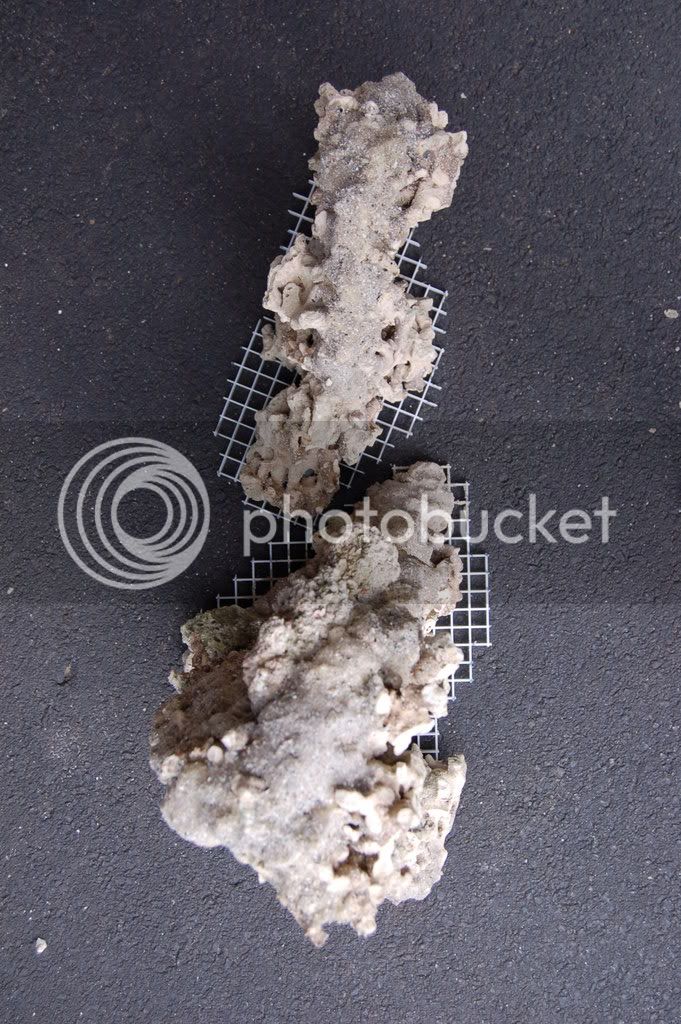 The finished frame for the stand, the 20g will sit on the left, then a drawer and cabinet to the right. I'm so psyched!! 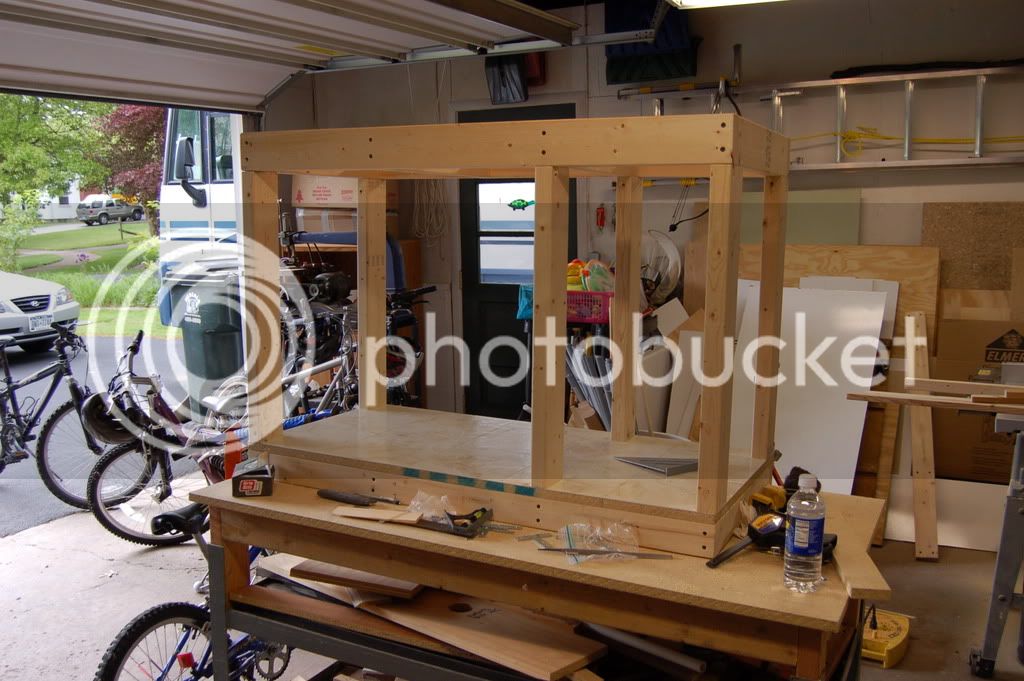 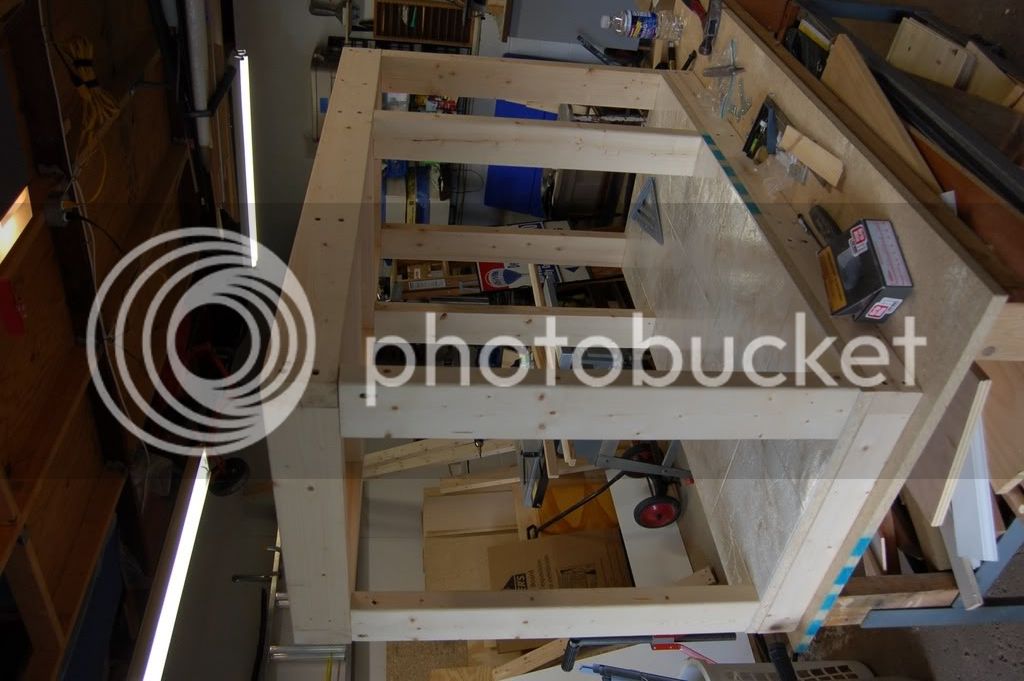 
Well, it seemed like a good idea. Any suggestions? Other than making new ones all over again, (no way is that happening) all I can think of is glueing some kind of small weights in the holes of the eggcrate that's exposed as the base (like marbles or lead fishing weights)

Holy COW!!! sorry but that's really funny. I've had plenty of DIY's go down the crapper too, so I feel your pain!

My SH tank is pretty much ready to be plummed so maybe we'll be getting up and running at the same time. I'll jump in on your thread when I can.

Yeah Ik... they're pretty heavy too, although I know that doesn't really mean anything. The smaller one sits with an edge on teh bottom, but the bigger one floats at the top, since it has less rock and more foam.

I really want to go with Pipefish. BUT, if I do SH it will be erectus. Alot of people say you shouldn't mix pipes w/sh or even mix species of either. But Mark Kliers got one of the sickest SH/Pipe tanks I've ever seen and he has banded pipes, african bluestripes, SH's (unsure of sp) and even a mandarin all in there. So that's what I'm shooting for.

You looking at pipefish at all?

cully pull the trigger on the pipes . i got a pair from abc and there doing great. the banded can hold their own in just about any reef tank. think mandarin not a skinny seahorse.
You must log in or register to reply here.