New Stand For 55 or Upgrade?

I had a 55 gallon reef that crashed August 2015 for unknown reasons. I woke up to find the tank looking like 55 gallons of milk. I never bothered doing anything with the tank again because I was contemplating moving but that's off the books so now I can revive the tank. Here's where it is now. 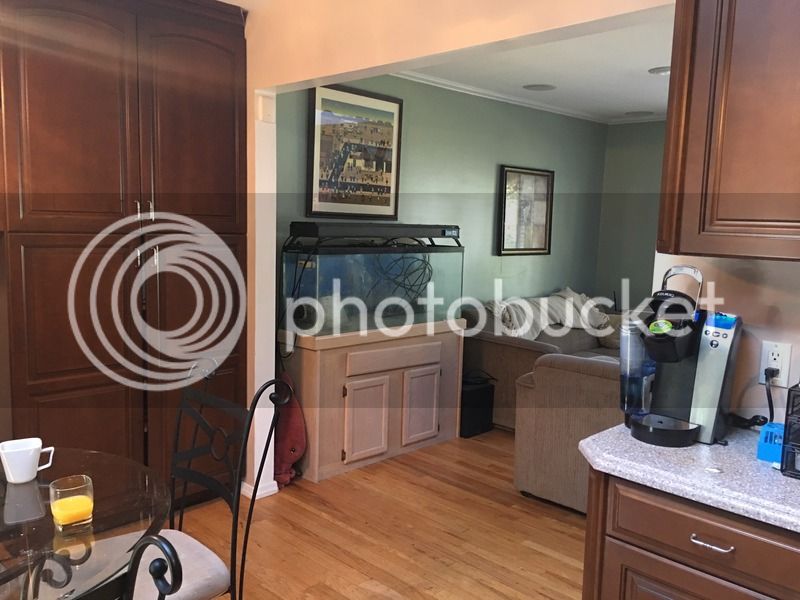 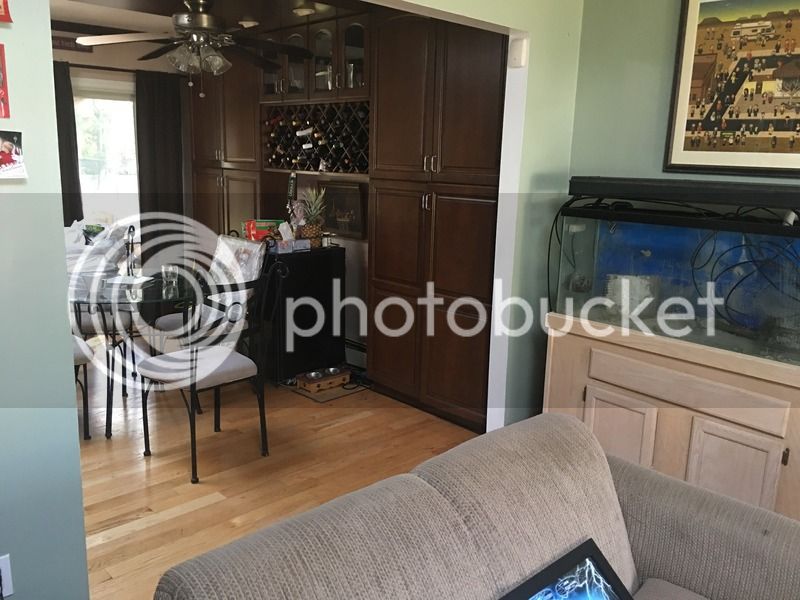 I've got a custom lifereef sump/fuge in the cabinet but that drawer really screws up my sump maintenance. I probably lose about 8" of headroom to do any work in there. I can remove the drawer to do work but it doesn't make things much easier anyway.

Option 1. Once I set the tank up again I'd like a different cabinet which gives me more room to work. The tank would remain where it is. The new stand would have taller doors.

Option 2 is to again get a new cabinet but rotate the tank 90 degrees to sort of act as a room divider between the kitchen and living room. If I did this then the tank would be viewable from almost all around which is appealing to me. The tank would still be tucked into the corner so if you're in the kitchen then you wouldn't be able to see about the left 12" on the tank due to the wall.

Option 3 still includes rotating the tank but getting a 75 to replace the 55. This would give me greater flexibility in scaping the tank. Even though a 55 and a 75 have the same width and height, it'll give me about 6" more depth.

Rotating the tank would take up almost 1/2 of that opening between rooms but would still allow for about 36" of walking room between the end of the tank and the counter where the keurig is. There is another opening to go between rooms so it's not like it would be a huge inconvenience to have it act as a room divider.

I am on the second story of my house and I have a tenant in the bottom floor of my house. The current position of the tank means that the tank runs parallel to the floor so I don't want to get a bigger tank for where it is now. If I rotate the tank then it would run perpendicular to the floor which obviously is a little better.

I'm recently divorced so I don't have to get approval for anything right now. ;-)

Premium Member
IF you rotate as a room divider is the back of the stand open, they usually are.
Closing it up makes it more prone to moisture problems that you do not want.
Would rotating it make it more prone to someone hitting it while walking past?
I would think so.
I would try removing the drawer & leave just the face plate first.
IF the color can be matched perhaps a whole new face with bigger doors?

I have no intention of keeping the current stand. The opening at the top of the cabinet doors is less than 20" from the floor. If it was a normal stand without the drawer then it would be something closer to 27". It's really a huge pain but good point with the moisture. That's why I also thought about placing the sump where the current tank is now but building some kind of removable bench seat or something to place over it.

Basically, the bench would be covered on the sides and the front to hide/protect the sump but it would be open in the back. Then I'd simply have to lift it up and out of the way to do my maintenance and I'd have complete/easy access to the sump/fuge.

I'm really liking the idea of rotating the tank to act as a room divider and the fact that you would be able to see the tank from all around instead of just head on.

In the coming days I plan on dumping the sand so that I'll be able to rotate the tank to get an idea of what it will look like. I'll live with the empty tank acting as the room divider for a few days/weeks to see if it would be a problem.

If it doesn't seem to work then I'll be relegated to just keeping the 55 but getting a better stand that has better sump access.
Q

Do you still have any dry rock? The 55 is a narrow tank to start with, might be a little limited with what you can do so the fish can swim around the rock.

Just remember divider tanks make it difficult to hide wires, hoses and such. They look great when you can make it work though.

qy7400 said:
Do you still have any dry rock? The 55 is a narrow tank to start with, might be a little limited with what you can do so the fish can swim around the rock.
Click to expand...

Yes, I purchased a couple pieces of dry rock from BRS when I started the tank a few years ago but I have it sitting out of the tank all dried up now. The pieces are probably too big for the tank to begin with and scaping the tank was tough with the 55. Looking back I probably should have split up some of the pieces to make them more manageable.

If I do rotate the tank then I'd probably upgrade to a 75. That would give me more or less the same footprint as my 55 but give me an additional 6" in depth to work with. I can only get the larger tank if I rotate the tank due to the way my floor runs. I have to stick with the 55 if I keep the tank where it is in the pictures I posted. Ideally I'd like to go much larger but having the tank on the second story limits what I can do.

As for the wires, the tank would still be up against the corner shown below but it would be rotated 90 degrees.

I currently have an overflow box so I was planning on placing that on the short side of the tank against the wall. All the wires and hoses would basically be hidden, just like they are now. The only thing that would be visible would be the ecotech PW I was planning on putting on the short side on the other end of the tank. I figure I could just drill a hole in the cabinet to run the power cord under the tank.

So I finally got around to rotating the 55. Please pay no attention to the open backside of the cabinet because I'm either going to finish it off or build a new stand. I'm also interested in going with a 75 for the extra depth so that would be a custom stand as well. 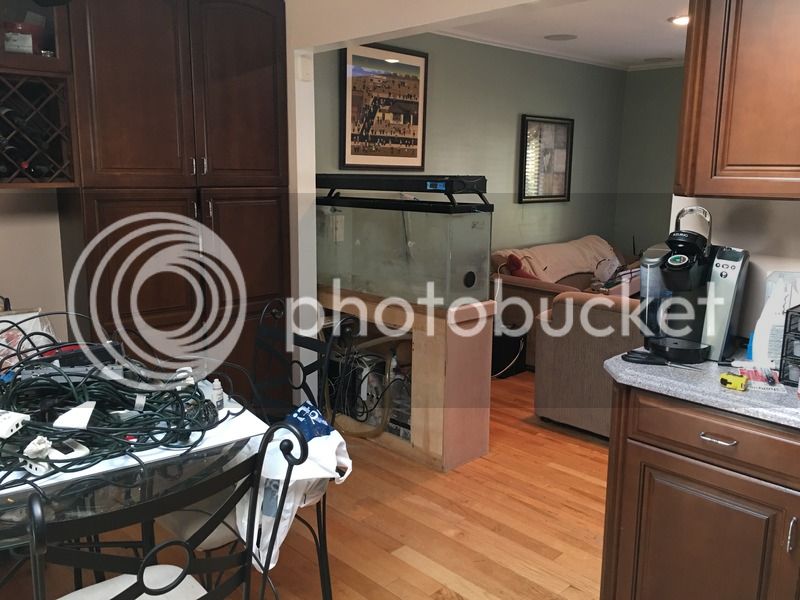 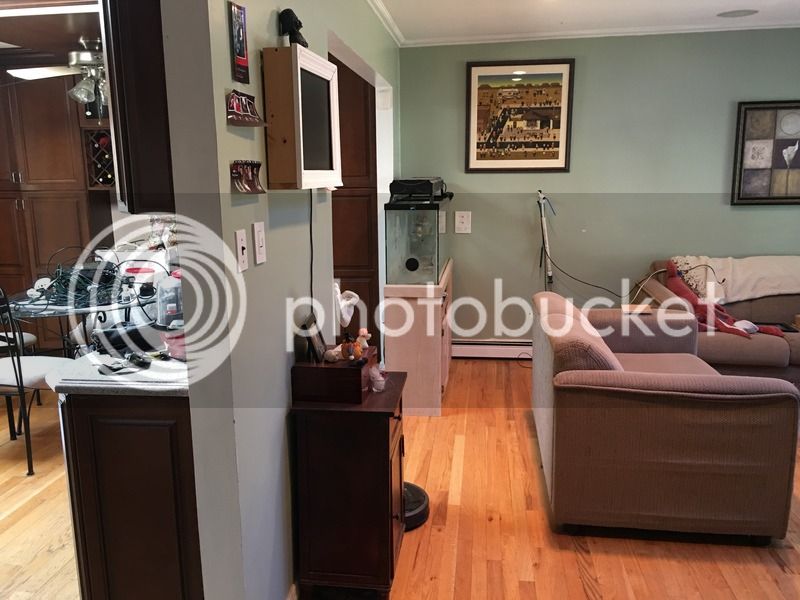 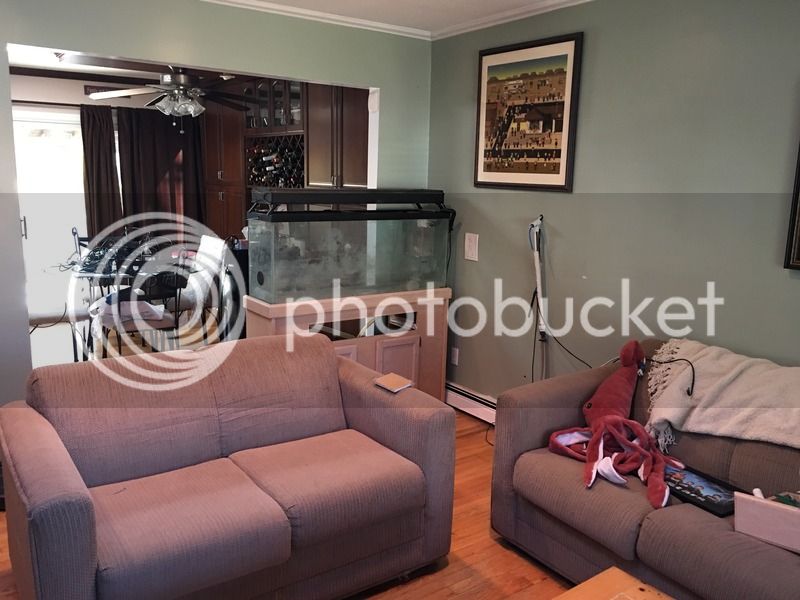 There is still plenty of room, 42" to be exact, of a walkway past the tank between the kitchen and living room. I have my overflow box and return line on the short side of the tank.

What do you think?

If you close off a stand, do yourself a favor and add some type of ventilation, either with a fan, or some slats on the side.

I failed to mention one important aspect that might change things. Here are the pics again....

Tank where it's been for years.

I currently have the sofa against the wall and the loveseat all by itself. I also plan on getting a new couch and that loveseat would no longer be there so you would only have the couch against the wall. You would no longer have that dead space in that corner where the couches meet and it would all be open.
You must log in or register to reply here.