Last night I picked up a rather large (about 10 inches diameter) bright green S. Haddoni that was at my LFS under a Reefbrite LED strip in a large coral tank. Knock on wood, it looks healthy and was there for about one week.

First, a little about my tank:

It's a one year old, 90 gallon with an Aquactinics Tx5 fixture. Flow comes from a Tunze 6095 and a Koralia Evo 1400, along with about 400 gph from my return pump. (all but the return are currently turned off to allow the 'nem to settle in). I've got a Warner Marine K2 skimmer and carbon/GFO reactor.

This is going to be a haddoni-focused tank. I sold off most of my corals to accommodate the 'nems so the tank does look a bit bare at the moment.

Fish list: 2 Black Saddlebacks, 3x chromis, 2 firefish (that get along great, actually), and a Flame Hawk who's currently in QT. I hope to add a Centropyge and some cardinals or anthias at some point in the future. The Saddles do get rough with it occasionally but nothing TOO bad, yet. Hopefully they will stay that way, as I've grown quite fond of them.

I have another Haddons in the tank, and it's been doing well so far, although at three months, it really hasn't been in the tank all that long to make a firm statement..

Anyway, here's a few pictures. The first is from less than 1/2 hour introduction: 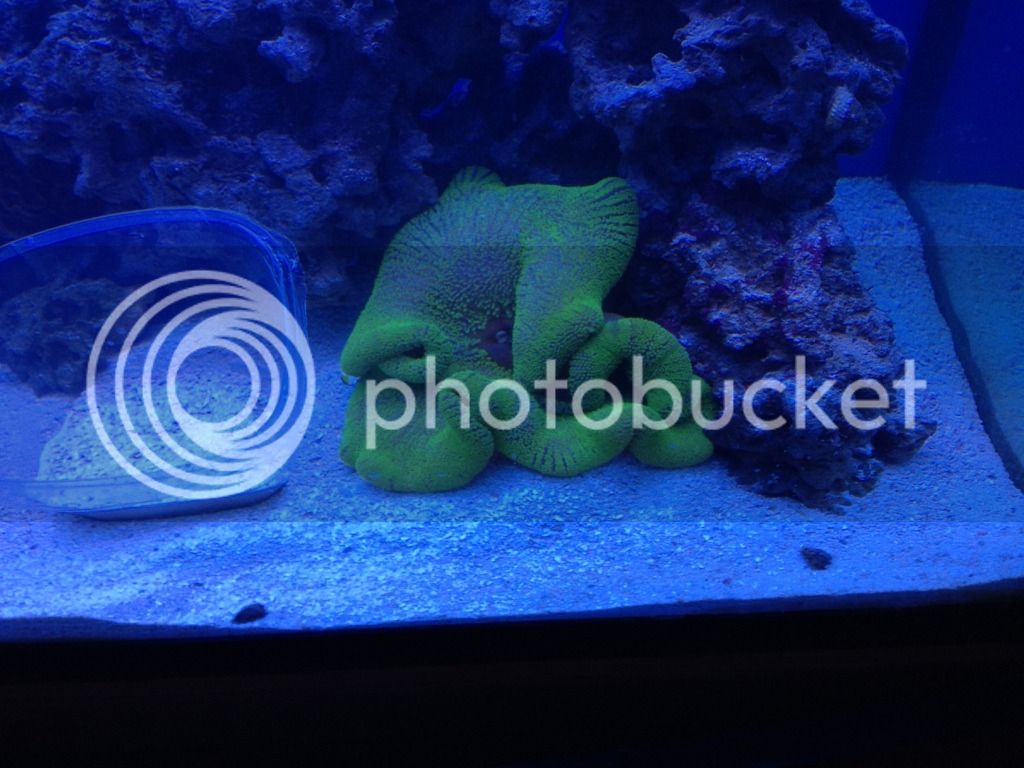 And two from this morning: 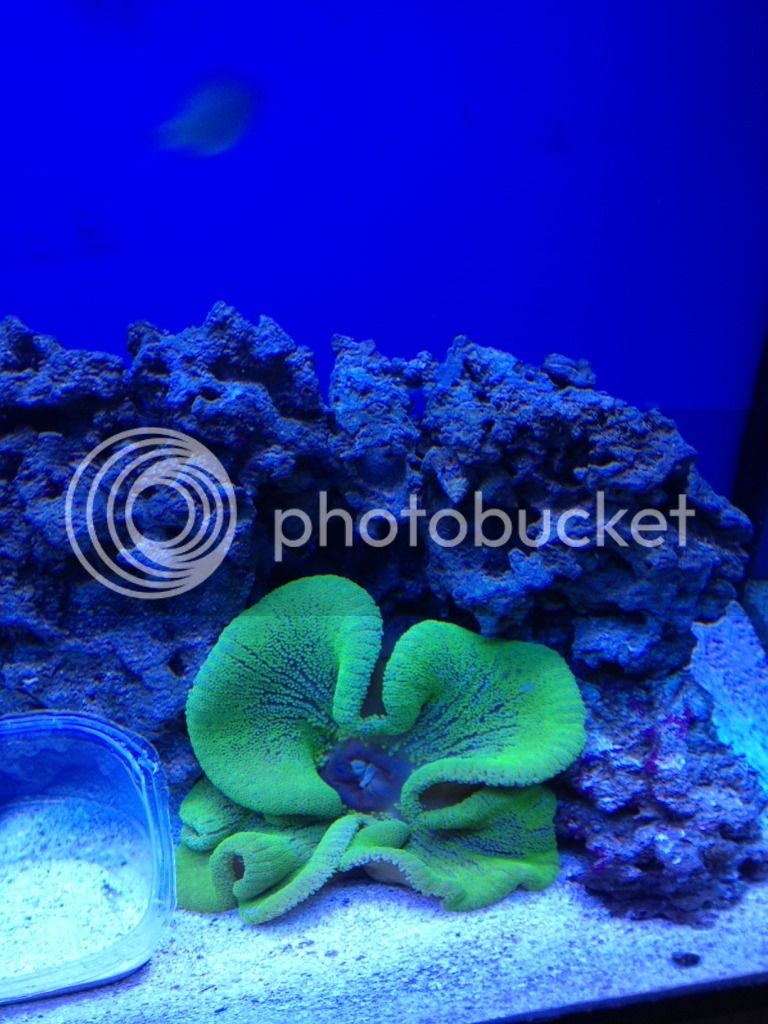 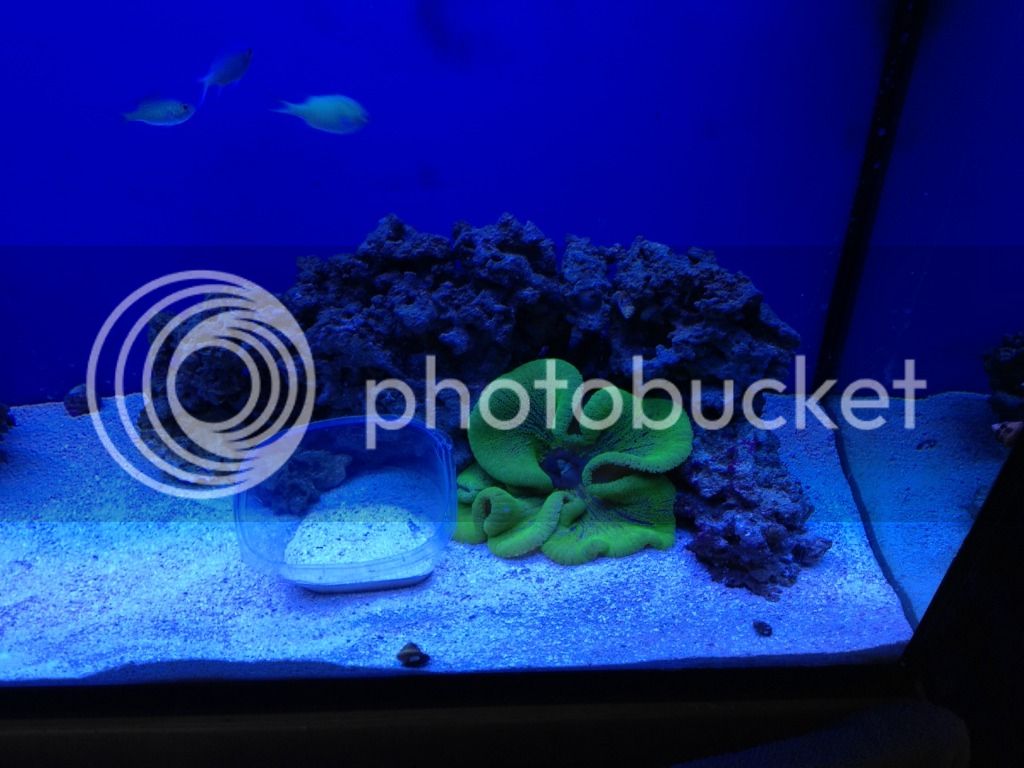 Please excuse the blue lights.. I have my actinics only for now (2x ATI bulbs.. one Purple+ and one Blue+).

I'm a bit nervous about the foot.. it looks extremely healthy, however it's still not completely buried in the sand.. it appears to have attached itself to the rock and buried partly in the sand, but it's still not completely buried yet. It's also incredibly difficult to get a picture of the foot currently. The mouth is mostly tight but at times opens a bit, as shown in the picture above.

All water params that I test for are coming up as zero, and pH is about 8. Salinity is 1.025. I've got a 10 gallon water change prepping right now.

Thanks for looking, and wish me luck...

Are you worried about the hawkfish eating the firefish? It seems like firefish are at the top of the menu for just about every predatory species out there...

Thanks for the compliment about my tank. I like it, but feel like there's always room for improvement.

I'm actually a little confused.... My anemone looks like it's anchored in the rock work but when you look closely, the large foot is still not completely buried yet. My other anemone acted similar for the first day or so but then settled right in.

It's a good thing I am working the evening shift today so I can watch him...

So far the best the anemone has looked is under all 5 bulbs. It got quite large and the mouth was tight. I will post a few pictures on my lunch break today....

here's the anemone after a few hours of all 5 T5 bulbs yesterday: 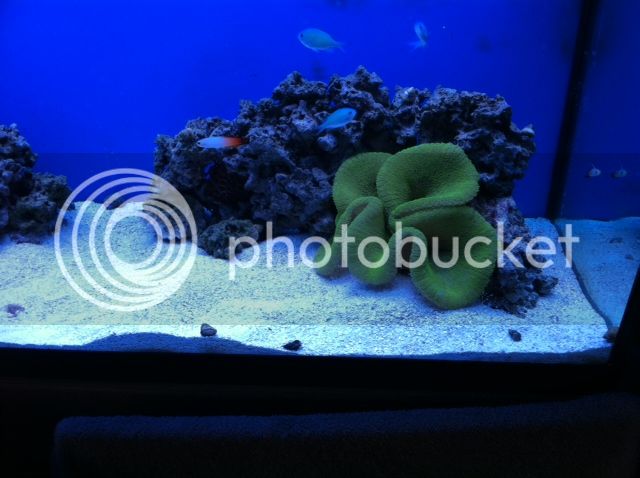 And this morning after no light for about 12 hours: 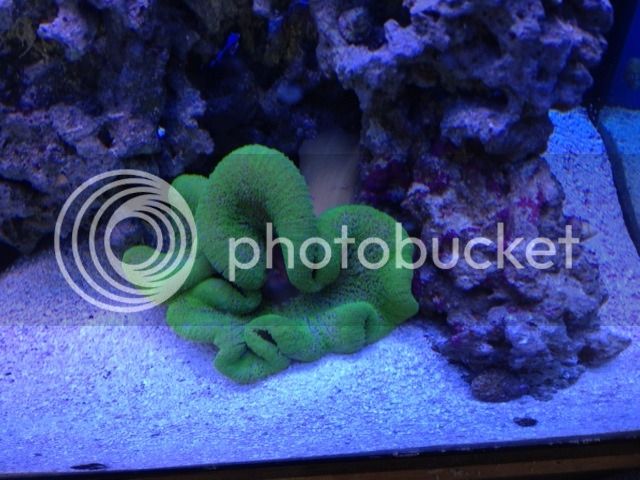 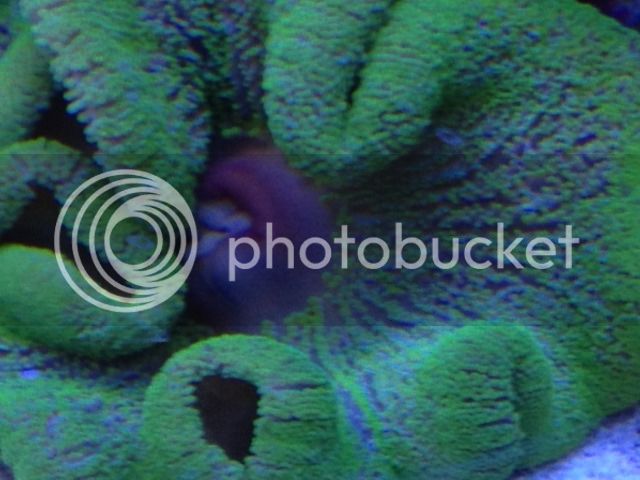 I'm a bit concerned about the mouth opening as can be seen in the above picture, and how I should light-acclimate the Haddon's. Right now the 2x actinic T5 bulbs are on from aprx. 1:30pm-10:30pm and the rest of the bulbs (5 total) are on from 3:30pm to 4:30pm.

I have 2x pieces of staggered egg crate, and the bulbs are about 8-10 inches above the water line.

Also, the foot has mostly attached to the rock and not the sand.. is this something to be concerned with?

They call me EC

E.intheC said:
I'm a bit concerned about the mouth opening as can be seen in the above picture
Click to expand...

I wouldn't be to worried about that. A little mouth distortion is to be expected with a new introduction. I've had mine for quite a few years and she'll do that if I move her.

I'll let someone else deal with the lighting.

Also, the foot has mostly attached to the rock and not the sand.. is this something to be concerned with?
Click to expand...

Again this is normal. They can't really attach to the sand. It's to fluid. They need something solid to attach to. It will probably squeeze its foot under the rock, and attach part of its foot to the bottom glass, and the rest to the underside of the rock.

Thank you for the reassurance EC. I feel like I knew this deep down but needed someone else to tell me the nem would be fine

I definitely get stressed out whenever I add a new carpet to my tank. Much more so than any other livestock.

They call me EC

E.intheC said:
Thank you for the reassurance EC. I feel like I knew this deep down but needed someone else to tell me the nem would be fine

I definitely get stressed out whenever I add a new carpet to my tank. Much more so than any other livestock.
Click to expand...

I can't say the anemone will be fine. A newly imported anemone could appear fine today, and be dead tomorrow. I see no reason for any undue stress though.
Has the anemone relaxed and started laying out more flat?

It has started to flatten out a bit but it's still in folds.
The mouth has tightened up as well
You must log in or register to reply here.