Pest or a bigger problem?

I'm pretty much at a loss at this point. This has been happening for about 3 months. It started with zoas randomly disappearing. The polyps are gone, the skirt and disc, but leaving the rest. In the past i thought this was a bacteria that only affected a couple of my colonies. I would remove them to QT, do a series of dips, they would recover and start growing again so back into the display they go. 6 months later same thing and this only occurs on 2 or 3 of my colonies, i have roughly 20 others.

Last month i noticed a chunck taken out of one of my acan lord colonies. It was about 1/8" between 2 polyps and near the bottom of the colony where it encrusts. It was down to the skeleton. And then just a few weeks ago my favorite acan lord was destroyed from 4 adult polyps and 3 babies down to this 4 half polyps. I also had a baby polyp and a small section of another acan disappear.

I am leaning toward this being a pest, maybe a eunice worm but i don't know. After the damage i move the coral up onto a frag tray and it recovers, regrows and does fine until it gets hit again. I've removed rocks and broken up rocks looking for a eunice but have never seen one.

On each acan and the micros there is always a bunch of sand where the damage is done, and that sand is held together by some sort of mucus. That is the only common thing.

Here are pics of the damage. I need some ideas on where to go from here please.

this one has been recovering just fine on the frag rack

zoa damage notice the polyps missing the skirt and disc only

This seems to be the favorite target. 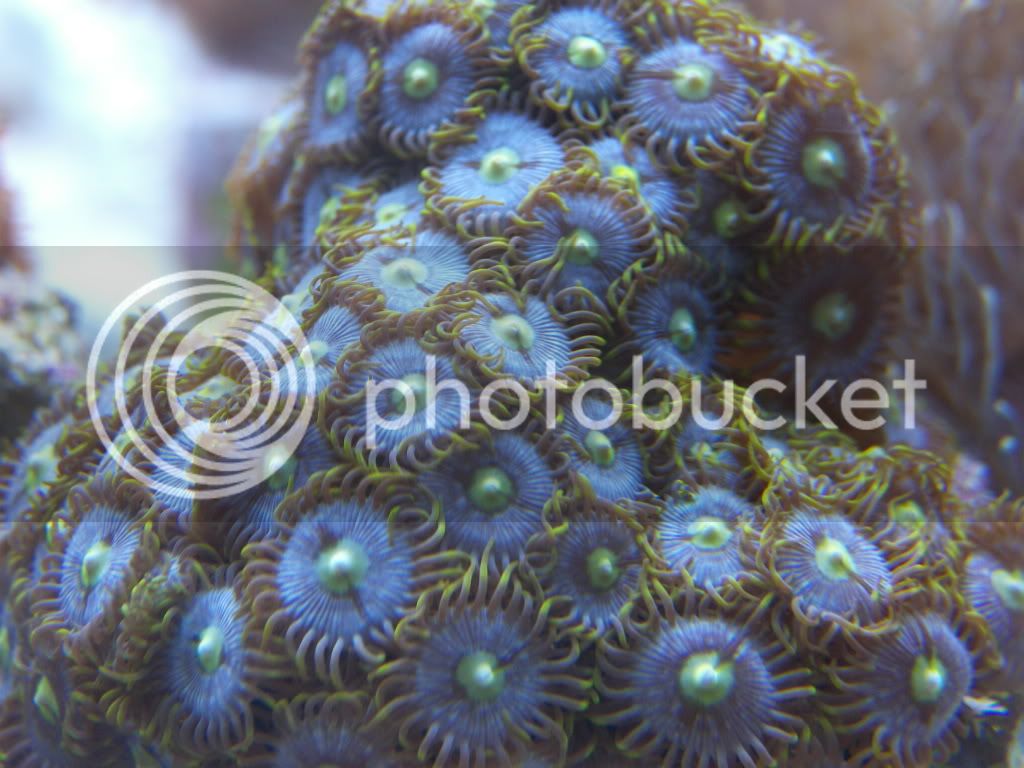 tagging along. i have the same problem. happens about once every month or two. i don't have the grand numbers of zoas that you do, however. Most of mine just seem to disappear (same results) one polyp at a time.

also wanted to say that we both have spionid worms within the zoa polyps. not sure if that makes a difference on the disappearance but i think they irritate the polyps in my tank.

there's three right in the middle of that last pic, they make a triangle if you drew lines between the three.

Never found a way to get rid of them, either. tried but no success.

Yah i have those all over they don't bother my corals. I snap em off with tweezers when corals are out of the tank. My sps just grow over them and they are much more sensitive than zoas.

tagging along, because 2 others said it.

Must be one of the more mysterious problems out there!!

Thats what i'm hoping for, but still not a single sign of one. I've been checking for about 2 months at night and nothing.

I haven't seen any lost or damaged polyps since posting this. I did however find an asterina starfish clamped down on some demon eye zoas so out it came. I try to remove those when i see them. So i guess that could be another culprit. Ugh. I just wish i KNEW what it was so i could start dealing with it. Thats the toughest part.

i went thru the same problem, couldnt find any worm, spiders, sundial snails, blue tang eating them, nothing, the only conclusion i could come up with was that some kind of fungus or bacteria attacked them and withered away, when i start seen any kind of stressed on them i dip them in iodine or other coral cure and set them on another place of the tank, most of the time that works pretty good and have save some nice colonies....good luck

<a href=showthread.php?s=&postid=14198697#post14198697 target=_blank>Originally posted</a> by sanababit
i went thru the same problem, couldnt find any worm, spiders, sundial snails, blue tang eating them, nothing, the only conclusion i could come up with was that some kind of fungus or bacteria attacked them and withered away, when i start seen any kind of stressed on them i dip them in iodine or other coral cure and set them on another place of the tank, most of the time that works pretty good and have save some nice colonies....good luck

Yeah, make sure you don't have any sundial snails. I found 3 on one colony and they were eating them up. They were hard to see at first.

sana i have been simply moving them and not dipping them. They seem to recover very quickly. This is what leads me to believe i have a pest. But who knows.

Removed a large blue bristleworm the other day. Lost another micromussa polyp.

Premium Member
Let me ask this out of curiosity. What have your tank temp been and have you looked at it with a mercury thermometer and not a digital one?

Could it be some bacterial infection problem? To me they don't look like they're being munched but I've never seen Eunicid damage first hand. Do the zoas disappear and does the damage occur overnight?

Chrisstie - 79.5 at night, 80.1 during daytime. I've charted it over a few days using mercury therm. to make sure my digital probe is still functioning properly.

Salamander - It could be. The damage is usually overnight, and happens only to a few corals in one area. If i move the coral off the sand to a frag rack or the opposite side of the tank, the damage stops and the coral recovers. I've never seen eunicid worm damage first hand either, thus this thread.

but i did find out that an eunicid worm is capable of eating fish.

so I guess it's manual removal or a 'worm trap', whatever that is?

\ not satisfied that an eunicid worm is the culprit, just looking it up.

so... anyone know of reef-safe fish that eat eunicid worms?

I've had similar problems but mainly with zoanthids. My problem has been amphipods attacking the colonies and I've experimented enough with it to know I'm not crazy (well not in this particular instance ).

At first my mandarin and springeri kept the populations down after my initial problems and zoanthids were taking off again, I also later added a wrasse. Recently I've noticed a steady decline again and started moving some zoanthids to my frag tank where they'd recover. While examining my tank with a flashlight during a few days of lights off due to spraying my ballasts with water (I don't suggest doing this) I noticed swarms of large amphipods were back. I think the large amphipods are just too much for the fish I have and my wrasse was taking care of them but sadly he jumped a few months back. I can also tell you that the orange and green zoanthids in the last photos are some of their favorites...

Most zoanthids on frag racks are left alone since it's tough for the amphipods to navigate. Zoanthids on or near the sandbed seem to be the first targets. I've also noticed that if I go a few days without feeding the problem gets worse and the same goes for if I have lights out for longer than usual. They also love PE type zoanthids.

Peter - I have witnessed that as well in my tank. Amphipods pushing 1" ripping the skirts off my PPE. Not fun to watch. They could very well be the culprits on my zoas. But i have not seen them even go near my acans. I gotta think there is a common culprit for both.

I'll be hanging with my trusted companions this weekend by my tank - beer and a red flashlight.
You must log in or register to reply here.