looking to get your comments on a goby that you amy recommend .. info on the goby and pics if you have them
U

I have a yellow watchman paired with a shrimp. They're cool if you have a sandbed.

I have a pair of red striped high fin gobies, they are quite entertaining to watcH! I house them with a firefish goby and a ywg, so it'd be possilbe to house them with multiple species of goby. small and friendly!

My diamond tends to jump out of the tank...

Premium Member
I have had a green-banded goby for almost a year and a half. It id colorful, active and ever eats out of my hand when i am feeding my corals!
B

Do you want a Goby that perches on corals or one that spends most of it's time in the sand bed? I have a couple of Green clown goby's that just jump from coral to coral. Very good coloration and pretty small(less than an inch).

If you want a green clown goby that perches I can hook you up. I am in Ravenna...he may not be worth the drive to you though.

In my 30 gallon, I've had two diamond gobies, both of which had carpet surfed within the first few days of having them. But I've had my yellow watchman for at least 10 months, and he's really cool. Right now, he's made his cave under the RBTA rock, and claims that corner of the tank as his.

In my 75 gallon, the only fish that I have in there so far is a gold headed sleeper goby, which is pretty cool. Spends most of his day sifting through the sand, which helps it stay clean, but also gets sand on top of the rocks and corals, so I have to occassionally take a turkey baster to them. I've been happy with both, and would recommend either.

I have a dragon goby that cleans my sand. I also have a high fin in my tank that will not go anywhere near my pistol shrimp . I thought I read that a clown goby will nip at coral? I wanted to get a few but stayed away because of that.

I wanted to get a dragon goby (they're beautiful as juveniles), but heard they can tear up the rock work pretty good. Have you had any problems with yours doing so?

I second the watchman/pistol shrimp combo. I love watching mine. They build new home soften and the fact that he hides make sit a nice treat when he comes out.

I have a watchman goby that's cool, never jumped out of the tank. As a matter of fact I don't think I have ever seen in the upper half of the tank. He also let's my cleaner shrimp do whatever he wants. It's kind of cool watching him open his mouth and let the cleaner do his thing. My clown goby is also good.
J

I am going to go with many others here and say yellow watchman with a pitol shrimp. Although I'm biased, they are really intersting to watch and see how they interact.

yellow watchman and pistol shrimp are my favorites but i also have a neon and an engineers/convict gobie. all 3 are cool. my avatar is the wtchman

<a href=showthread.php?s=&postid=14206143#post14206143 target=_blank>Originally posted</a> by o0xerog0o
I wanted to get a dragon goby (they're beautiful as juveniles), but heard they can tear up the rock work pretty good. Have you had any problems with yours doing so?

EDIT - Never mind, for some reason, I was thinking about the dragon wrasse...
Click to expand...

Honestly mine made one huge hole up front under a rock(HIS HOME) and just cleans the top layer everywhere else in the tank. Mine will eat algae off of the rocks and eat all kinds of food. He goes all over the tank and also up high. He has been a model member of the community. The only bad thing is he gets sand on some of the coral on the sand. Like stated above, I just blow it off with a baster. My blue pistol shrimp does waaaay more damage digging. I had no idea...:eek1: Luckily he stays on the end of my tank.

+1 for the gold headed sleeper. as stated a pain in the butt from his sand sifting. my favorite fish in my tank 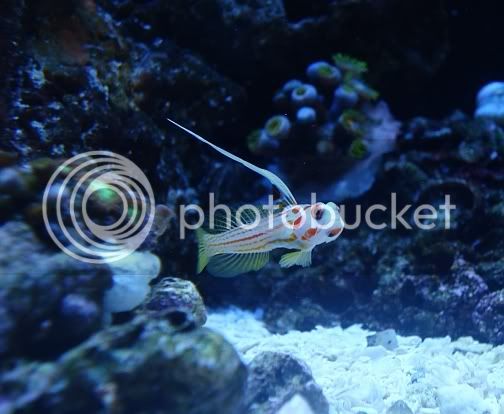 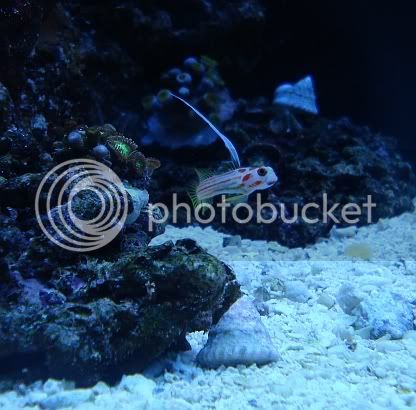 TSwifty, that's a beautiful goby. I'd like to get my hands on one of these...

+1 on the Yashia Goby, just make sure your tank is covered.....mine got through light grate ....PS I <3 that Spike fin goby

Thats a Flaming Prawn Goby ,,and they are real nice !!!! I saw one @ Pet Solutions in Wisconsin and it was one of the coolest fish i have ever saw. Its on my hit list this spring.
You must log in or register to reply here.

Help me stock my tank upgrade?

Anyone use binoculars to view their tank?
2