reefkeeping.com add - what fish is that?

Had the bright red tail section? Looks creamy at the top?
Just thougth I'd ask.

Looks like a photo-editted Amphiprion akallopisos or Amphiprion sandaracinos to me. In other words, no natural fish looks like that.
R

Looks like a clown, maybe an orange or pink skunk.

See a pic of one:

Just thought I'd ask. It caught my eye so I had to ask...

Have a good evening

Premium Member
You guys really have to read stuff front to back. Ask the guy who is taking credit for it. 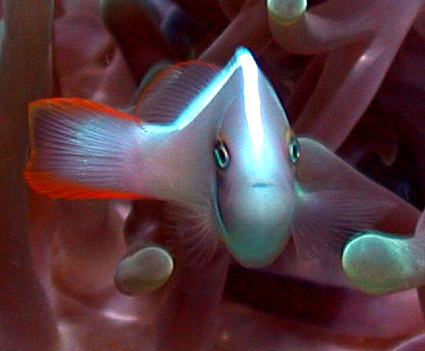 I think an email to Eric B. should answer your question, he contributed this photo.
I recall him showing this photo at the last MARSH meeting.

Don't know about the photoshop part.
Guess you should ask him this as well
frank

not to speak for eric, but leonard is 100% wrong about editing the colors.

My apologies. The way some you guys sound, it's almost as if photo-editting was a crime!

I'll go ahead a send him a message.

I was not aware of who's image it was let alone what type of fish. Thus my original question.

I'll ask him about it. Thanks again, have a good day.
R

After you find out, could you tell us what it is?

Leonard said:
My apologies. The way some you guys sound, it's almost as if photo-editting was a crime!

No, actually that's the way you made it sound (quite emphatically, I might add):

Pic looks exceptional to me.. I would think it had some special editing as well. Even if that was a simple sharpen filter..

If the pic was not edited then there has to be some other special effects or something. The fish has a red outline around it's fins. That can't be right can it?

Yes - as soon as I hear I will post

Yes - as soon as I hear I will post

As soon as I hear back I will post.

I posted a link to this thread and a question in Eric's forum.

I'm very curious to see what he has to say. I've seen the bodies of fish change color pretty dramatically due to moods/stresss/etc., but never seen fins do that.

I mentioned in the thread in my forum that I took this photo on an atoll called Karang Koka in the Tukang Besi archipelago in Sulawesi Indonesia before the 9ICRS Bali conference. I was diving with Dr. Helmut Schumacher as my dive buddy, and Mike Kirda was with us, too. He saw the shots as we came out of the water and dried off.

The photo was taken using a Nikon CoolPix 990 in an Ikelite digital underwater housing. The image was put into Photoshop and the autocorrect function used to adjust the photo. I don't use any other tools on my photos, and would never color or otherwise "enhance" a photo. This is the equivalent of normal darkroom procedures adjusting how far you "push" film. I love the shot so much I have it framed on my office wall, and I can assure you I wouldnt frame a photo I "faked."

I have the raw image, and the the colors are the same. It was a near perfect shot as it was (not often this happens!), so autocorrect really didn't do much at all. However, the original shot was from further back, so when we used this image, I had to cut out the clownfish from the anemone and blow it up a couple hunded percent. No alterations were ever done beyond that. Be happy to post the raw unedited photo as a small image here if anyone wants to see the orignal - ;-)

I don't know much about the color patterns of clownfish other than what I see in stores, so until you guys brought this thread up, I never knew it was unusual. I just always thought it to be one of my better photos. Good to know!
E

Premium Member
This is the original raw image, straight off the camera, uncorrected, shrunk from 28 x 14 ".

You think this is colorful, you should see some of the others I have!!

Thanks Eric. That is one outstanding phenotype. I've never witnessed a specimen so unique in the thousands of clownfish I've seen. Very reminiscent of an albino (from the planet Kronos ). Great picture, and great find! My guess is the unintentional effects of light underwater may have had something to do with the resultant picture. Incorrect camera settings or camera internal error(s) could result in unnatural exposures as well.

Anemone: I'm trying to follow your logic .... because I said "no natural fish looks like that" = photo-editting is bad? Am I the only one not able to link these two ideas together. Emphatic, eh?


FWIW, it took me 30 seconds to adjust hue/color balance with photo shop to make a clown that more resembles what I've seen:

(NB: not suggesting Eric is lying, but that camera settings/light interaction/camera errors can contribute to these problems).
B

Looks like your camera went on the blink. I fiddled in photoshop assuming the colors of the fish were not funky and came up with this. I adjusted the hue and the saturation. It would have been easier if the full size image was had.
E

Excuse me? Why would you say my camera went on the blink? Would you like to see other shots from the same dive?
You must log in or register to reply here.

J
What Angels to adds

R
jumpy fish with no lid?

P
Which fish can help to control this algae?