Refug. Middle Or Side

my question to you is refugium in the middle or to the side . im trying to take a poll. im torn between the two. any pros and cons
K

I have the fuge in the middle, this allows for a simple desing and unidirectional water flow. If you chose to have the fuge on one of the sides you will have to plum a seperate feed just for the fuge. Also, with a dedicated feed to the fuge it is not part of the complete water flow therefore the benifits derived from a fuge (lowering nitratres and such) will be less effective because you are only circulating a small percentage of the system water through the fuge. Anyhoot there you have my humble and sometimes ignorant opinion... 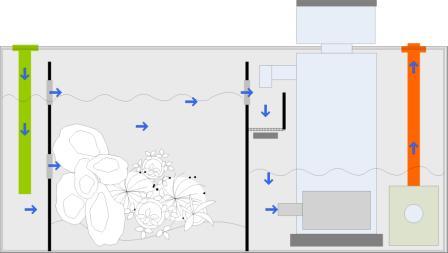 there were a few reasons for this, and it took a lot of thought and many design changes to come up with this plan.

some of the things I was facing...
The largest of which was size constraints - the largest sump I had room for in my stand was a 15G tank, and at that it BARELY fits.

I also only have a single overflow downtube, so it would have taken some creative plumbing to feed the 'fuge sepratley from that.

my inspiration came from this article on melev's reef:
http://www.melevsreef.com/acrylics/sumps/e/sump_model_e.html

he mentions that the first model was "goofed" and used by someone with their skimmer body in the output section returning into the input section - this overcame one of my biggest space constraints, allowing me an appropriately sized return section with my skimmer output still "behind" a bubble trap. of course this made a center return absolutely necissary.

In conclusion, a center return does require some thought behind it's design, but can be just as effective as a linear flow, and even has advantages in some instances. I encourage you to check out all the designs on melev's reef and as many as you can find here, before finalizing your own design, as here are as many ways to set up a sump/fuge as there are reefkeepers, and many of them have offerings that may be just what you need.

Premium Member
I have to respectfully disagree with kasper4lyfÃ¢â‚¬â„¢s opinion. Having a slower flow through the fudge in no way limits the fugeÃ¢â‚¬â„¢s effectiveness in nutrient export and in fact slower flow will help the fuge function much better.

(given the picture in kasper4lyfÃ¢â‚¬â„¢s post - I have never seen anyone place their skimmer right in the return section of their sumpÃ¢â‚¬Â¦ seems like a micro-bubble problem waiting to happen in my opinion Ã¢â‚¬"œ also the water level fluctuates in the return section so I would also expect that there could be a potential problem in getting consistent skimmate production. It might work as pictured but it seems like it could be problematic.)

Also the plumbing is not difficult at all. You can choose to tee off of your return line with a ball valve Ã¢â‚¬"œ this allows you to have skimmed water go through the fuge.

Or you can just tee off of your drain with a ball valve Ã¢â‚¬"œ this allows you to have unskimmed water for the fuge. There are pros and cons to each method but they both work.

I very much agree with Safir that you should research MelevÃ¢â‚¬â„¢s Reef. There is a lot of great information there.

the skimmer should be in the first section you want the skimmer to clean the water then go through the refugium. all the good that the refugium does will all be taken away in the skimmer.
H

so, i have a few options.
1
to tee off the return of the pump to the fuge
2
to tee off the skimmer to the fuge
3
feed off the drain pipe to the fuge
all sounds feasable and i am curious to hear peoples opinions on these set ups.i am asking because i am a newbie in saltwater and i want to make the right decision so i dont make a catastropic disaster later on. basically i dont want to do double the work later on.
i have so many questions but i will ask them later in drips and drabs so i dont go off the topic. more pics to come.

Premium Member
Hey! I'm a head chef and I was born in 1971!!!! go figure!!! Come clean, youre really just starting a saltwater tank to grow some lobsters, right? lol .
But seriously, I agree with safir, go to melevs site to research. I would put the return in the middle, and tee off the return to the refugium.

Premium Member
oops, I meant tee of the drain!!!
M

I still like the old skimmer/fuge/return section. I want the fuge to be as big as possible and with most of Melev's sumps with the return in the middle the fuge is smaller than the return which I don't understand.
H

I THINK THAT ILL PUT THE PUMP IN THE MIDDLE!! the fuge to the side and feed off the drain into the sump

this is, of course, pretty much a moot point if you have an ATO.

now hat i've got my setup (outlined above) up and running, i would also reccomend splitting off the drain line for the 'fuge section if possible - i had a heck of a time balancing the flow to the fuge with the flow returning to the tank with the 'fuge teed off the return, but this is the way I had to do it with my configuration.

I just took some pictures, and will post them lator today.

Premium Member
I'm setting up mine and I was thinking that splitting it off from the drain to the fuge would make sense too. I have a 72g AGA bowfront and the drain is rated at 600gph. With my Mag 7 and the height, it will push about 500 gph. Seems like splitting it from the return will only lower that. Plus, with sand in my fuge don't the little critters need some more solid particles to eat?

the coral rocks are holding in there temporarally until i can find them a home elsewhere - sand and some rubble rock is coming later this week/weekend.

MJAnderson - yes, splitting the 'fuge from the return will lower the amount of flow you can return, but keep in mind that if you are getting ~500 GPH to teh tank from your MAG 7, and split off say 100GPH to the fuge, you will still get ~450+ to the tank, because the flow going to the fuge won't be fighting all that head pressure.

I use a 3 section skimmer/fuge/return scheme. That way

1) The skimmer gets the "raw" tank water, so it can skim out crap
2) The refugium gets the water next. Critters grow in there and algae sucks out nutrients
3) The critters that overflow into the return section get pumped back to the tank, withougt fear of the critters being skimmed out.

Simple, seems to work pretty good. 2 baffles and you're done. No other plumbing!

I think I am going to stick to my new plan.

The water entering the refugium will be coming from the return via tee and ballvalve. I will have a skimmer in the overflow feed area. Baffles should break up any microbubbles I get.
H

wow so many choices. lol ! ! ! i think every one makes a clear point , but i think splitting from the drain would be benificial. it will be really hard to have water flow into the fuge from the drain (in) if yo udont have a ball valve in place at the T fitting.if the drain runs in with out a valve water wont flow through the T in the fuge. it will be a little trickie but it can be done. with a little inginuity.
now if you tee off the return , you must use a smaller pipe to reduce to keep the head flow up there. if you use a 3/4 in return pipe in to a 3/4 in T fitting then you reduce the head flow. but if you use the same 3/4 in pipe return into a 3/4 in into a 1/2 in T fitting and feed the 1/2 in pipe into the fuge you dont loose much head. i think that made sence. i hope everyonne understood that LoL!!!!!!!!!
H

THIS IS MY PREVIOUS IDEA

HeadChef, my sump is pretty much identical to your second drawing, except my baffles are single, meaning there is just a wall there, not an over/under thing. Works pretty well. I like that the fuge part is in the middle because my stand opens from the middle, so I can see the fuge part.

Has anyone used a deep sand bed fuge with a center retern?
H

im changing my refug. as we speak. i am cutting out the middle and putting the fuge at the end like in pic #1 11x12x12 i can gain more approx.7 gallons . with the fuge in the middle it was about 5 gallons. im going to feed the fuge from the return on the pump. like in pic # 2 . i think it will be more benificial. i will document my travels after i get it up and running. well see.
You must log in or register to reply here.