My DIY drivers are based on CAT4101 driver chips and are getting old. They have been outright replaced once out of new parts but even these ones are starting to act up. I have worked on them many a night to try to get some more life out of them, but i think the design itself is getting so old (2011 design) that i should just replace them with something better.

I've done some thinking on the shortcomings that i have in the design and how i would have liked to change them, but am not sure if all of it is totally sound.

Things that i'd want:
AC powered, rectified
Onboard micro with wifi, either on headers or baked in
Voltage rails for fan, micro
Baked in pwm driver, like the PCA9685 (with option to chain in to next driver board to skip on the micro)
No gorram screw terminals....

What that would change compared to the current design is i wouldn't be tied to a DC supply or my current controller, so i could in theory just move the whole thing, plug ac in and it would work in the new place. Also screw terminals.... arg. Taking the driver off the light means 17 screw terminals need to be loosened and later tightened.

I've also been limited to ~24V DC since i chose to use CAT4101s. Which means my strings are limited to pretty small things and working around that is annoying if i were to want new LEDs as well.

Some searching on digikey led me to a chip that sounds nice enough, but there is so much out there i might as well see some other opinions before actually designing stuff out.

What i found was the AL9902 family, which is pwm dimmable, switching and capable of 2 amps with an internal mosfet. Seems like it would work fine for a ~700mA solution. Though even at 200k Hz the inductor needs to be quite big it seems at these ratings... at least if feels like its pretty big.

Nice thing is i wouldn't be limited to aiming for as close to 24V as possible, instead could make the channels different voltage depending on what is on the string.


But maybe i'm all sort of wrong and should rethink it all. Any input would be nice.
O

Take a look at the LM3414HV. It's a common anode, low side buck regulator that's pretty darn efficient (up to 97%). I've found it to be a great replacement for any of my older led builds that used the CAT4101 originally. I recently designed an 8 channel version on an aluminum PcB. The drivers can accept up to 60Vdc, current levels can be adjusted from 200ma - 1000ma via pots on each channel. Here's a photo- 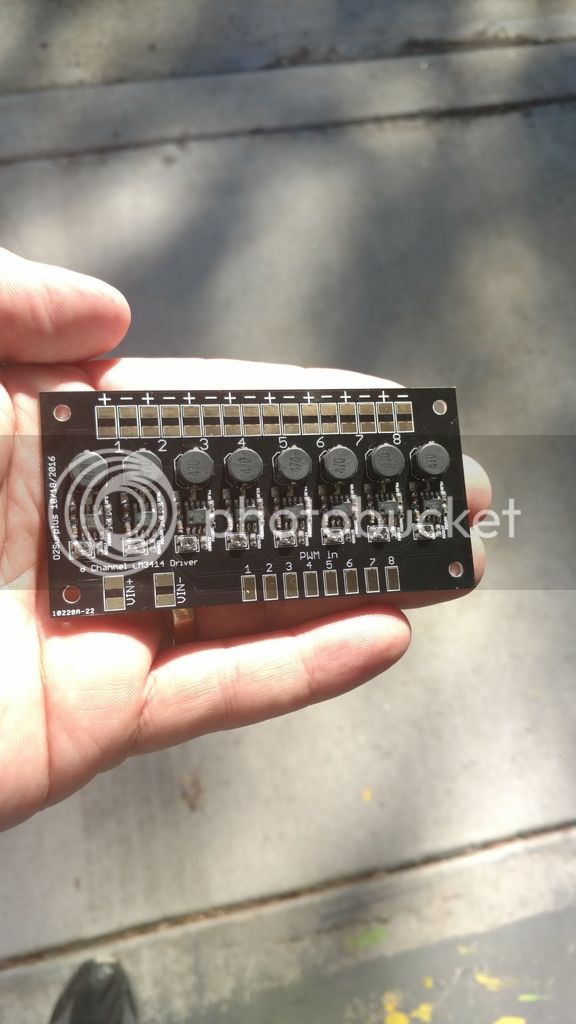 Very nice design, What is the cost of this 8 channel driver?
N

Another Option is the Meanwell LDD driver series. They are PWM controlled though. Fortunatly the controller I use does have PWM outputs. LED group buy sells the drivers and a PC board for up to 4 drivers.

I am also working on a PWM based LED Controller and have been looking for a cheaper alternative to the Meanwell LDD's. Can anyone confirm if the CAT4101 or LM3414 support 16-bit pwm?
O

I am also working on a PWM based LED Controller and have been looking for a cheaper alternative to the Meanwell LDD's. Can anyone confirm if the CAT4101 or LM3414 support 16-bit pwm?
Click to expand...

Thank you oreo but I think I will go with the LDD-L (found it today on Mouser for < 4bucks) as my voltage requirement is 24V and I already have boards designed around the LDD-H so its a simple modification.
O

I don't have an issue with the Archon PWM outputs or thr AVC module PWM outputs with the LDD's. I cannot say on the other controllers. The only L versions I have are the 1500's though.
O

n2585722 said:
I don't have an issue with the Archon PWM outputs or thr AVC module PWM outputs with the LDD's. I cannot say on the other controllers. The only L versions I have are the 1500's though.
Click to expand...

I use the H versions for the 700ma LDD's with a 24v power supply.
You must log in or register to reply here.