I picked up some Sera tests kits to replace my TM kits . I ordered the calcium and alk (dkh ) test kits before I left NC . They were out of stock on the alk kits . The Calcium was dropped shipped to me straight from the Sera USA dist . I picked up a DKH (alk) kit locally from a pet store in Mass.
I started testing the DKH kit and my alk kept reading 5 dkh. I would add some super buffer dkh to bump it back up . I then adjusted my dosing pumps to compensate for the drop . Always adjusting back to what I thought was 8dkh .
I finally decided to stat using the calcium test kit . These numbers with a TM kit read 400 ppm the last time the TM was used . The Sera read about 330 ppm .
In a nutshell I did not think much of it . I just kept adjusting and doing water changes to compensate .
The level stayed low and would not bump up . I went to the dosing calculator and tried to adjust in 1/3 increments to bring the levels back to NSW .
What I got was a snow storm and a HMM moment . Something told me this does not jive .
I took the old B-D or HW syringe from the TM kit and drew 5ml out of the tank water . I then added this to the Sera test cylinder . The 5 ml's I drew read about 7ml in the Sera test vial based on their ml graduations ?
Both the calcium and alk kits read the same error. The 5ml level on the test vial was truly 3 ml of test water .
Pic below . (left is 5 ml draw and right is 3 ml draw from the syringe) . 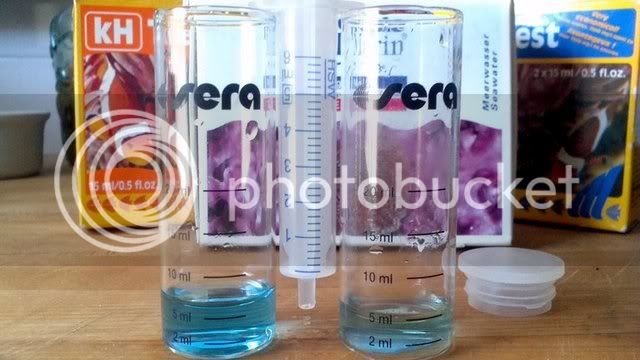 I contacted the pet store and he checked their test vials . All his kits indicated the same 2ml error.
I contacted Sera but all they said was the kits were right and sent a PDF on instructions .
If you draw the 5ml with a syringe the kits will somewhat accurate . Tested against what was left of the TM Calcium kit and DKH against a API .
Sad part is these kits are very economical , price wise . Most reefers or noobs will buy the cheaper kit to save money . It had me chasing levels for at least a month . I am glad I was sorta lax on making extreme adjustments.
I can easily see someone crashing their tank , alk burn or precipitating calcium out of solution . My corals are fine but I thought I would share this so others can adjust for more accurate tests .
It is a obvious qc issue . Sera still has not responded after I replied with the pet stores response to me included . I have no idea how many bad test vials are out there .
Every one the pet store had was this way . My 2 calcium and 1 alk kit have these incorrect test vials .

In a nutshell ....
Just make sure you draw the sample required with a syringe. Do not go by the test vial .

That syringe isn't the most accurate thing in the world either. But the error there is 100's of microliters, not whole milliliters. I would definitely go with the syringe over their graduations. Man, that's off by around 50%. That's pretty bad.
B

Premium Member
Unfortunately, you don't know whether the reagents really are calibrated for 5 ml, or for the mark on the vial...

bertoni said:
Unfortunately, you don't know whether the reagents really are calibrated for 5 ml, or for the mark on the vial...
Click to expand...

But you can find out.

Thanks for the link disc1 and ur input .
I see ur point Bertoni. Any thoughts on using the Hanna alk checker ?
B

Premium Member
There are good and bad reports on the alkalinity checker. It might be fine, and if I were in the market for a test kit, I might get one, but I'd probably double-check its results for a while.
You must log in or register to reply here.

R
Newly cycled tank - not sure what I did right lol