I am back on RC again, it has been probably 8 months since I have posted on here.
Anyway I do have a question:

In my 72 gallon bow front tank I have about 90-100lbs of live rock. When I set it up about 2 years ago I just kinda piled up all the rock on the sand, and I have rock on top of rock. This has worked out alright for these 2 years. But after looking at some other tanks on here, and elsewhere on the internet I have noticed a trend, which is that many folks have made "shelves" in the tank out of PVC pipe and eggcrate for the rocks to sit on that allow more water flow, leading to a cleaner setup.
My question is, I would like to set something like this up. What would be the best way for me to go about doing this? What materials do I need? How would I get everything together (ie. Zipties, silicone, etc. ) How would I make it fit together (ie. one large structure, many small ones)? Any other factors to think about in building one of these structures for the rock to sit on?
Any advice on this would be very useful.
Thanks in advance.
Evan.

Just had a thought. That is to
build a staircase like structure and have all the rock sitting on the ledges
of the "stairs".
M

Eggcrate and pvc...its all the rage

you will need a slew of zip ties

With some patience, ingenuity, and a good variety of live rock it is possible to get the open areas, caves and tunnels that you want. I did this when I moved my 180 and love the result. My fish swim from one end of the tank to the other behind the rock and pop in and out everywhere.

The catch is that it took me 2 weeks of hair pulling frustration to do it.

Pardon the lousy pics.
I can never figure out how to get good tank shots, and when I use a flash it lights up the inside of the caves and you can't see any depth. These do not do the tank justice, but should give some idea of the result. 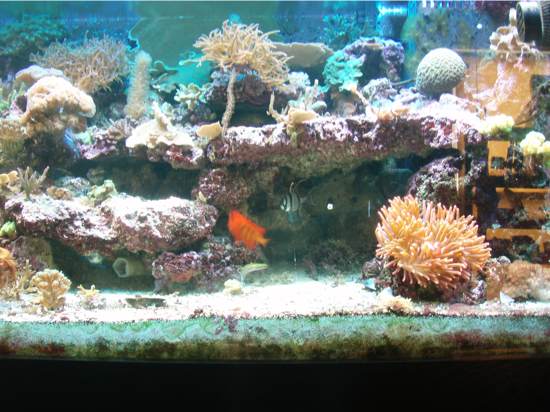 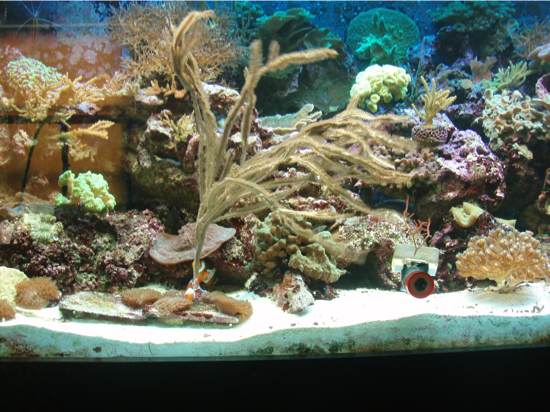 Premium Member
creating complete "stairs" to put live rock on in a 72 gallon tank is going to be tricky. You need to use a relatively large diameter PVC to support the weight, so it can be hard to build something strong enough to support that much rock and still keep it invisible in a tank that size. A better option might be to create two or three small table shape stands out of pvc to give you a foundation for your base rocks, then create bridges between them and hide them from view with other rocks.

I drew it out actual size on some large butcher paper. I came to the conclusion that it is a bit tall and a bit to narrow to support much rock securley on the horizontal surfaces. It then occured to me I could use zipties and tie the rocks on to the structure either by holes already in the rock or by holes I would
drill. Is That feasable or am I way off base?

I have 120lbs of Florida LR on 2 layers of eggcrate sitting on 2 inch PVC pipes, and two Korilia powerheads blowing underneath . I am very happy with this setup. No detritus build up anywhere. Heres a video of my 60gallon cube..

Premium Member
If you click on the little red house on my post you can see the rock structure and cave I made with PVC and BIG zip ties. It's pretty early in the thread. Pages 6 & 7.

<a href=showthread.php?s=&postid=15490059#post15490059 target=_blank>Originally posted</a> by jimroth
If you click on the little red house on my post you can see the rock structure and cave I made with PVC and BIG zip ties. It's pretty early in the thread. Pages 6 & 7.
Click to expand...

Very cool. Will think about that design
also when at the hardware store buying stuff.

Premium Member
The black pvc and some of the "furniture-type" 3-way pvc fittings came from savko.com.

Ok, so I went to the local hardware store and got about 15' of 3/4" PVC pipe, a bunch of elbows and tees. A sheet of eggcrate and some zipties. I build myself a set of shelves that I am pretty proud of. That is until I try to put it in the tank. I took out all the live rock on the left side of the tank where I wanted it, and put it in. Well I neglected the fact that there was an overflow box eating up about 1/4 of the front-to-back space in the tank, and the structure I made went from the front of the overflow box clear to the front glass. Darn. So I figure I would try it on the right hand side where there is no overflow box. So I go ahead and take out all the rock on the right hand side. Luckily (I guess) I don't have any corals except for a few kenya trees on a couple rocks so I am not really at risk of killing anything by disrupting every rock in the tank. So I put the shelves I made on the right side of the tank. A big big, but I am thinking I can live with it. That is till I go and try to put rocks on it. As I feared the horizontal parts are just to narrow to make much use out of. So I take it out and decide I will go back to the drawing board. Not a big deal. But then I spend probably 2 hours in front of the tank trying to get all of the rock back in in a way that I like. And the water throughout this process is, as you can imagine pretty dirty, so I can't see what I am doing that well, adding to the time it took me. Anyway, As of now I got the rocks in an arrangement which I kinda like, but not nearly as well as I did before I did this project. And it looks kinda bad to cus moving the rocks around so much I get some of the rock which have been under others on top now, so I have some bleach-white rock showing, which I am not to keen on, but its not the worst thing in the world. So bottom line is I spent all evening working on it just to have the tank look a lot worse IMO. Its nobody fault but my own, but I just had to let it out.
And as for the structure I built, its back to the drawing board. Luckily I did not glue it together (the fittings were tight enough without) so I have all the materials to build something new. And this time I might spend some more time on it than just a few hours.

bummer dude. well i dont have much advice on this subject because i personally dont care for the pvc shelf structures, but i hope it all works out for you! Good luck!

<a href=showthread.php?s=&postid=15493162#post15493162 target=_blank>Originally posted</a> by 100%hydrophylic
bummer dude. well i dont have much advice on this subject because i personally dont care for the pvc shelf structures, but i hope it all works out for you! Good luck!
Click to expand...

I have kinda given up on it for now. I am going to get it all cleaned up tomorrow. Blow sand off rocks. Clean out the Cheato in the sump cus it acts as a big filter for all the crap in the water. Clean off/out powerheads, etc. Just get the water all clear again. I will take a while thinking about what I might want to do with the PVC structure. And depending on what I come up with I will try again later.
You must log in or register to reply here.