Show me the plumbing from your overflow to your skimmer

Can you post some pics of your overflow plumbed to your skimmer. Last time I did this I had a fluctuation problem even though I ran the extra water to the sump. Not sure what I did wrong, but maybe some pics will show me.

you should swing by my crib one time
granted i have my skimmers (2x asm g4x)in my basement in a 70 gallon tank half filled with water which then run into my fuge.
i used a 4" pvc tube which the overflows drain into and the sendra pumps pull water from the inside of the 4" tubes each skimmer is feed by each overflow

I'd definitely love to swing by and check out the setup sometime. It's always nice to see other peoples setups.

As far as the overflow, my skimmer is recirc and I'd like to run the overflow directly to it. I could feed it with a pump and set it up similiar to yours, but I'd rather not use another pump. 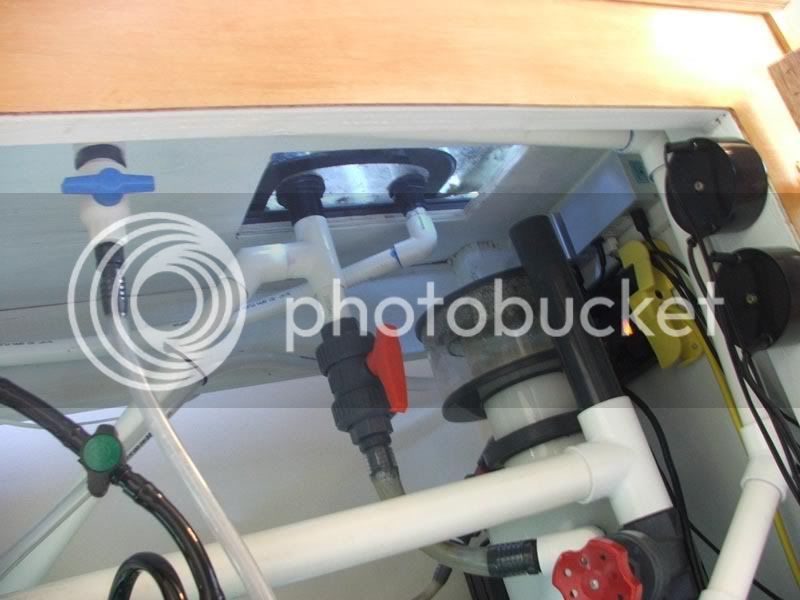 There's only a couple of things to really remember.

1. try to place the valve as far from the T as possible
2. reduce the feed/drain as close to the skimmer intake as possible

i think with the recircs most use 300gph pumps or close right?
to hook to your overflow you would have to split it or slow down your return to around the 300-500 gph rate which isnt a bad idea as long as you have enough flow in the tank
M

I experimented with gravity feeding my recirc skimmer. I gave up after running into problems reestablishing drain siphon in enough time to avoid a tank overflow, after cutting-off/restarting the return pump (daily feeding and power outages both). The closed end of the drain (into the skimmer) would provide enough backpressure to impede siphon regain, resulting in a tank overflow.

I'm sure with a bit of effort I could have overcome the problem (by venting the drain at the right place, over the sump so water surges out of the vent hit the sump instead of the floor) but it wasn't worth it. I just use an MJ400 to feed my skimmer now, it's small, quiet and efficient. Anyways, something to keep in mind.
J

I see someone got there new toy. 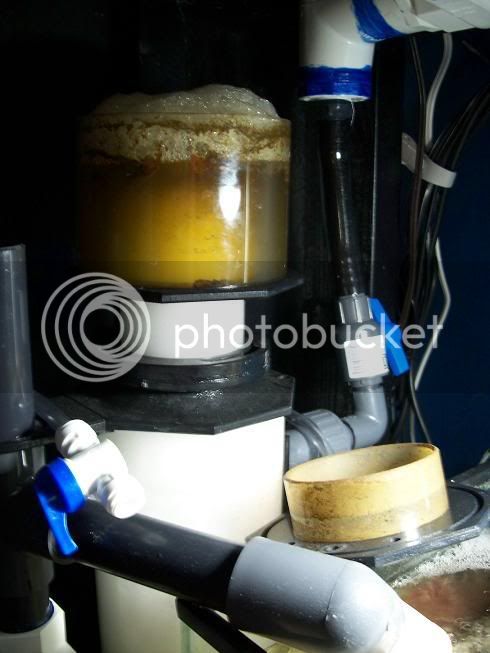 I'll see if I can get a better picture.

<a href=showthread.php?s=&postid=10468450#post10468450 target=_blank>Originally posted</a> by little_squid
i think with the recircs most use 300gph pumps or close right?
to hook to your overflow you would have to split it or slow down your return to around the 300-500 gph rate which isnt a bad idea as long as you have enough flow in the tank
Click to expand...

The rule of thumb is around 1.5 to 2 times your system volume. For me, that equals roughly 300gph, but obviously if I had a much larger system, the results would be different.

I thought most people nowadays are running slower returns with more display flow anyways. Thats how I run mine. High flow in the tank, low flow through the sump/skimmer.

But yes, the idea is to T off the drain so that you can divert excess water. I just run that water through the refugium. So I'd say that 2/3 of my display water passes through the fuge, and the other 1/3 goes through the skimmer. Works well for me Until some type of new technolgy surfaces, I will run my skimmer this way.

I've never had any restart problems with the siphon from my megaflow kits. I'm sure it can happen, but I'm not sure why it would

The siphon issue doesn't make sense to me unless it is setup the wrong way.

I LOVE my gravity feed to my skimmer. I do it the same way as mentioned above. No fluctuations whatsoever (asside from when extra organics enter the system). Part of the success I have from it I think is that I don't run too much water from my sump to my display and I have two seperate overflows. What I really like about it is that after the return pump switches back on from the feed timer, most of the excess crap is immediately skimmed out.

Thanks for the responses everyone. I had to temporarily feed it with a pump until I can get the plumbing necessary to feed it with the overflow.
You must log in or register to reply here.