sulfur denitrator? too good to be true?

Looking around for sump options and I saw one that can be custom built with a sulfur denitrator. It's supposed to take out nitrates and add calcium. Has any body used these? Doing a quick online search seems like they're for real. Will it actually help me eliminate a need for a calcium reactor with CO2? (I have a big phobia of CO2).

Looks good, but is it? Should I give it a try?

Premium Member
I'm not sure that I've ever heard of someone local using a sulfur denitrator. The Reef Aquarium Volume 3 (Delbeek & Sprung) has some good information on the reactor. To me, it sounds like it would take a lot of fiddling to get the flow through the reactor just right. It needs to be precise. Too fast and it won't eliminate nitrates. Too slow and the water leaving the reactor will have a rotten egg smell. The reactor also needs to be purged regularly. You'll also need to add a Ca chamber or dose Ca to keep your levels up. You'll also still need to perform water changes as well. The principle sounds very interesting though and is being used primarily by public aquaria. Let us know if you decide to try it though! Experimentation is the root of innovation

If you're worried about using CO2, have you considered dosing some sort of two part solution? I was going to use a Ca reactor along with Kalkwasser when I first setup my tank, but after talking with a few of the experienced guys decided I was worried about CO2 as well. I like the stability the two part affords me. I mess with the doser for about ten seconds once a month .

LOL, I dose my tank too, but was wondering how that would ramp up with the bigger tank. What do you use to dose your tank?

Premium Member
A couple people here used to run denitrators. Someone even built their own IIRC. I was also looking into them at one point but I can't remember why I opted not to

Premium Member
I use Randy's two part with his magnesium addition as well. I've only mixed up a total of about five gallons each of Calcium and Alk over the past five months. I use two, three gallon water jugs under the tank and dose with a Litermeter 3. I've got about 35 small colonies/larger frags of SPS/LPS and dosing 130ml of Ca and Alk daily keeps my Alk at about 8.5-9.5 and my Ca at 425-450.

Lots of people don't think dosing is feasible with a bigger tank but it works great for me. Hopefully you'll get to see the setup soon.

I used my DIY for awhile. The nitrates did drop, but you have to be careful with pH, as the sulfur will cause it to drop (that is why the calcium breaks down).

Little_D runs one on his tank.
M

I think the main drawback is the acidification of the effluent (pH goes down). I believe this is partially overcome by having the effluent exit through a secondary chamber with crushed aragonite or something to bring the pH back up a little. The sulfur denitrator is usually used on larger tanks with a calcium reactor to offset the pH drop. Overall the flow rate is supposed to be very low through the denitrator, at least that's what I read. There is a great thread about this in the DIY forum. I have been considering making one for my 55gal garden tank, although I think this may be overkill However high nitrates is my number one problem, so I may do it anyways.

Calcium reactors also lower pH (due to use of CO2), so how would one being run with a Sulfur Denitrator offset the pH drop. Do only way would be to run through a second chamber of ARM (or similar media) or to use a Kalk Reactor (dose Kalk) to raise pH.

<a href=showthread.php?s=&postid=12852924#post12852924 target=_blank>Originally posted</a> by builderguy
Calcium reactors also lower pH (due to use of CO2), so how would one being run with a Sulfur Denitrator offset the pH drop. Do only way would be to run through a second chamber of ARM (or similar media) or to use a Kalk Reactor (dose Kalk) to raise pH.
Click to expand...

That's what it does, goes through a chamber of ARM to raise it's pH and disolve calcium to go back into the tank. If the flow is too slow, it can build up hydrogen sulfide gas (rotten eggs), too fast and it won't remove the nitrates efficiently.

In theory sounds OK, but is it worth the money? Or should I try and make one myself?

Mine was a sulphur denitrator and I used the mixed sulfur / aragonite blend.

I wouldn't spend that much money on one - mine was super easy and pretty cheap to make. I actually still have it around if you are interested.

How did you make it Kim?

How bout a little write up and some pics?
Maybe even have a DIY meeting sometime on all sorts of easy and cost effective DIY projects. Like steves top off, etc

I'd be up for having a little get-together to brainstorm and discuss construction of a DIY Sulfur Denitrator. 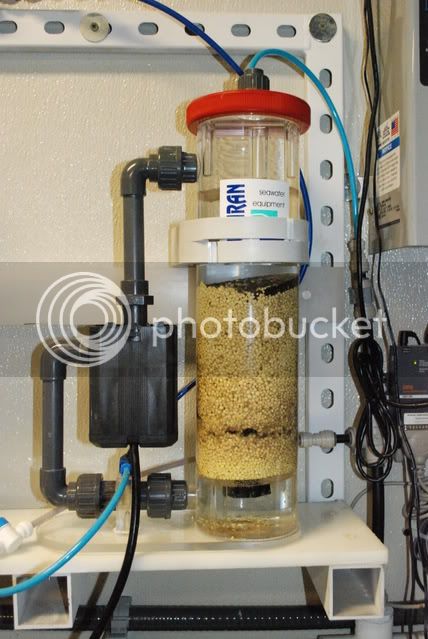 I have been using this filter for over two years and my client is a heavy feeder for his 1200 gallon reef tank. Nitrate levels have never been over 1-2 ppm.

I am using an aquamedic one (not sulfur based) and my buddy in the bay is using an h&s sulfur based nitrate reactor. They both works however, mine does clogged up a lot because of the slow drip rate. I rarely see any PH drop however, if the flow rate is too fast then OPR number will drop (assuming you have enough bacteria build up in the reactor, that lovely smell :lol: ).

When I had my tank up for a year there was so many ways I tried to reduce nitrate in the tank but nothing was able to lower it to an acceptable level where my sps would color up nicely. Reading a lot of thread regarding these reactors and a lot of folks wasn't too happy with them and said that it's a waste of money. However, I found an individual who had lots of success with his reactor and through a lot of PM had helped me setting up mine to operate the way it should and it did.

Just note that you might have to adjust the reactor more than you like to because of the slow drip rate as well as the nirate produced in your tank is changing from time to time depending on your bioload. I do have to adjust mine all the time, now I just let it drip for a day or two until it clogged up and then let it sit there for a week or two and adjust for it to drip again since I can't detect any nitrate with my Salifert or Elos test kit, so I am not too worry about getting it to work consistently.

<a href=showthread.php?s=&postid=12853530#post12853530 target=_blank>Originally posted</a> by miracles38
Mine was a sulphur denitrator and I used the mixed sulfur / aragonite blend.

I wouldn't spend that much money on one - mine was super easy and pretty cheap to make. I actually still have it around if you are interested.
Click to expand...

Where do you get the sulphur media? I hear the granules work better than the powdered form.

<a href=showthread.php?s=&postid=12970786#post12970786 target=_blank>Originally posted</a> by tricky
Where do you get the sulphur media? I hear the granules work better than the powdered form.
Click to expand...

Yes, stick with the granules.

Here's a link to the Orlando area dealers.

http://www.caribsea.com/locator/results_list.php?city=orlando&citysearch=Go
Last edited: Jul 18, 2008
You must log in or register to reply here.

Does anybody still use downdraft skimmers?