Premium Member
As the title said, I just swapped for a new XR15 g5 over my 60g cube. Spread is awesome and I'm really happy with the color blending and lack of disco effect. It's still kind of there if you look, but it looks more like a blended shimmer than individual colors. I definitely like the arrangement more than the previous generations and other LED lights.

I ran Kessil A350s on the tank a few years back and the shimmer was awesome. The color left a little to be desired, though. I'm really liking what the Radion can do. I followed the BRS recommended settings, then bumped the red, green, and whites up to clear out some of the blue. I'm getting good florescence without a windex tank. The color is pretty close to what I was getting from my T5s, but with more pop.

I was also able to take down my hanging arms and move my MP40s to the back of the tank. The overall look of the tank in the room is much better now.

I'm not surprised that the light is good overall. We've known that there are plenty of LED fixtures that will look pretty good and grow coral well. I am a little surprised at how blended the light is, and how white I can get the overall light without losing florescence. I got it mainly to avoid having to buy new bulbs, get a little more pop, and reduce the visual impact of the light. I expected some tradeoff in the areas I mentioned above, but I'm dealing with very little of that. Definitely a good buy if you're willing to drop the cash.
M

Team RC
I have heard from a few die-hards of MH and T-5 and they all like the new G-5's, it nice to hear that a single XR15 is sufficient for a 60 cube. Most used to have to get two leds or upgrade to a bigger unit like a 30.
O

how long has it been since you made the change ?

I have heard from a few die-hards of MH and T-5 and they all like the new G-5's, it nice to hear that a single XR15 is sufficient for a 60 cube
Click to expand...

I'm kind of in that camp. My favorite combo was a 250w Radium and some good actinic supplementation. VHOs looked good, so did a blend of T5s. I considered breaking out my old reflectors and ballasts, but don't love the idea of a big hood over the tank. Kessils give the best MH'esque shimmer because of the very fine point-source. The A350s left a lot missing WRT color, but I realize they're early Kessil tech. Hopefully the new ones are better. I think Ecotech has done better than anybody with respect to spread, color blending, and color quality.
That said...my tank is in disaster recover mode. My coral selection is pitiful compared to what it was in November. I lost 90% of the tank when we had an ice storm that killed power for around 3 days. The house dropped below 55 degrees. The generator I had in the garage failed (a small 2000w one) when I tried to start it and the whole state was almost literally sold out...at least w/in a 2.5hr drive. I lost a pretty mature reef, heavy in SPS. Now I have a few recovering zoa and paly groups and some coraline algae. The tank is taking a while to bounce back from the massive die off.
That's a lot to say that I'm sure the light will do fine over my 2' cube, but it might leave a really dense SPS tank wanting. I'll go back to a mixed reef with quite a few acros up top, but it's not going to be an all SPS box. BRS recommends an XR30 on a 2' cube if it's going to be a dense SPS tank. I think I'll be set up for a good mixed reef based on what I've read. I have zero growth history to back this up since the tank in still recovering.

how long has it been since you made the change ?
Click to expand...

a day or three before I made the first post. See above for why I can't comment on growth...and the short duration of use. That said, Radions (and other good LED fixtures) have successfully growin coral for several years. I ran a 120g tank with Kessils and T5s, then this same tank with a pair of Kessils for a few years after. Before that I used MH, MH and VHO, MH and T5, and T5 alone. All grew coral. Hell...I had power compacts over one tank at one time. They worked too...mostly.
My comments at this point are completely aesthetic. The light and arm look good over the tank, the light can be programmed to look really good inside the tank. I have high hopes of good growth based on the Radion reputation over the years, plus my experience with lesser LED lights. I expect good results once my water is back to normal balance and consistency. I'll be happy with growth that matches my T5s, and the improved florescence is already evident.
J

Are you using the Pro or the Blue?

Premium Member
I went with the Pro. I've never liked the crazy blue-dominated look that a lot of LED-lit tanks trend toward. I see it in LFSs and in pics of members' tanks on this and other forums. There are some cool colors that show up, but it often looks too blue and Windex-y for me. Many of those tanks are lit by LEDs, but there have been a bunch of T5 tanks that use an abundance of blue bulbs over other colors.

See the post above for my favorite old school light combo. I prefer a light that looks mostly white, but has enough UV/Violet/Blue to bring out florescence. Keeping coraline algae pink while keeping blue coral blue is important to me. This light does a pretty solid job of it.

That's a lot to say that I like my tank to look a little more white than the current trend. This light helps me strike a good blue/white balance while still supporting greens and reds. I see it like using ATI Blue+ bulbs with AquaBlue Specials, but adding Purple+ in to bring out reds.

I've always found LEDs lacking the "purple plus factor." That bulb adds a lot of color variety to a T5 array. Later model Hydras and Radions have been better at incorporating that spectrum, but this light seems to do it better.

Again, I'm not trying to gush. I was expecting color quality sacrifices that would make my tank a more blue than I'd like, exchanging that for the lower visual impact of the light in the room, plus not having to worry about bulb changes. My blend is probably A LITTLE more blue than I'd prefer, but that only holds true in the same discussion that I criticize the new Ferrari look. By that I mean, it's good, near perfect, but I could probably find a way to tweak it a little more to make it closer to perfect. That said, I'm very happy with it.

Like all lights of all kinds, it's not perfect. I think that growing up with old school MH/VHO combos skews my opinion a bit. A 20K Radium with Actinics is still my ideal baseline, but I'd bet that more than half of the people buying or researching new lights have seen that combo to use as a point of reference.

Car references are fun.
Most LEDs are like the Camaro. They look great, but leave the old heads thinking that as awesome as the new stuff is, there's nothing like a '69.
To me, the Radion g5 is like a new Challenger. It's not quite as awesome as the origional, but it's more efficient, more configurable, and an argument can be made that either the modern or old school looks better.

Hopefully I've made it clear that I'm really happy with the light, but it's not perfect. It's also not flawed from what I've seen so far. Any criticism WRT color can only be personal preference. I have no growth info since I just added it and my tank is still recovering from a mass die off, but I have no doubt that it'll grow corals at least as well as the G4. BRS has some PAR data that says it's better than the G4 overall, but I can't say one way or another.


....jesus, that's a long answer to a simple and direct question. Sorry for the ramblings. I just don't want this post to sound like I'm saying that anyone should upgrade/change unless they find value in the specific things I've found beneficial with this light.
Last edited: Mar 25, 2021
M

Team RC
Does light spill, my wife hates that, she sits on the sofa next to my little IM Lagoon and hates it if the light gets in her eyes? She has taped paper around my 360X across the room as well.
B

I joined the club today. After the BRS YouTube comparison videos and especially seeing them on a tank in person today. I was amazed. Thought I would get the Kessil AP9X since I started my Red Sea build but these lights are amazing even spread uniform elite spectrum and par levels 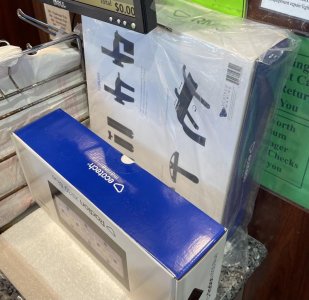 Does light spill, my wife hates that, she sits on the sofa next to my little IM Lagoon and hates it if the light gets in her eyes? She has taped paper around my 360X across the room as well.
Click to expand...

Mine isn't far from my couch and I'd say it's no worse than my T5s, and maybe a good bit better. The light isn't really spilling out of the tank at all, but I can see the LED array from where I sit. I'd say it's no more or less than 90% of the lights out there. I wouldn't buy one just to avoid some light spill if you're happy with your current light. It's a great light, but I wouldn't ditch a light I liked for one of these. It's definitely worthy of consideration if you're looking to upgrade or buying a light for the first time.
You must log in or register to reply here.

Painting the INSIDE back glass