Well I'm at a point with my tank that I can no longer sustain it. I'm up to adding 3/4 a cup of sodium bicarb, and calcium chloride about every 5 days. It's becoming impossible to keep my alk. up and the pH stable, and as a result I've had a few times where the pH goes out of wack and my tank turns into a white cloud. And since I can't keep the alk. up my SPS have started to recede. Here are the last pics of the tank before I tear it apart. I've got a 12gal that all the zoa and most of the LPS will be going into. I just need to drill the new rock and put dowels into it to keep the formation I want, and probably next weekend I will make the switch. 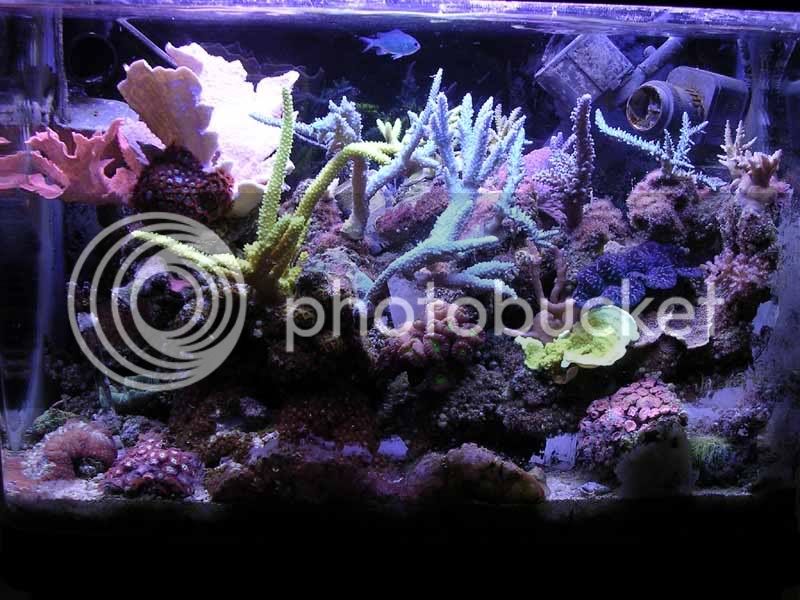 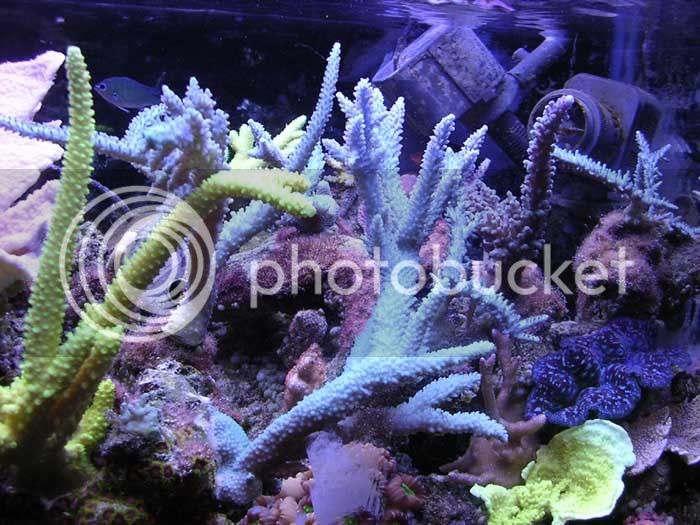 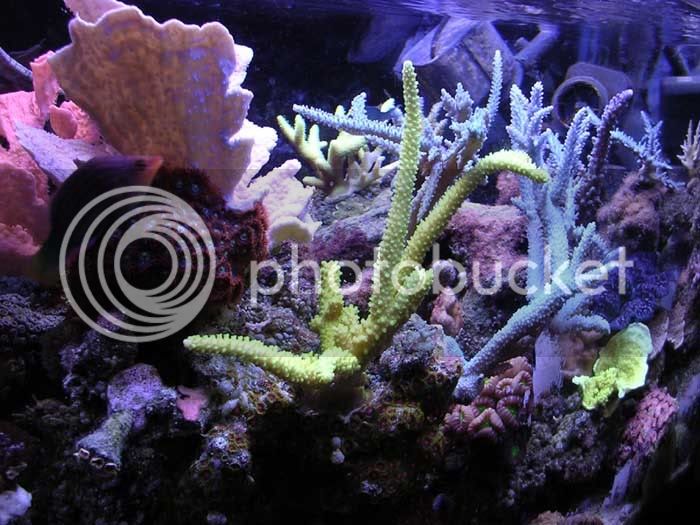 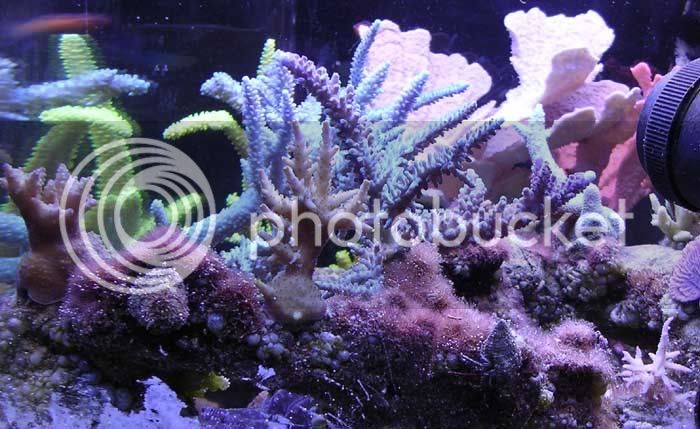 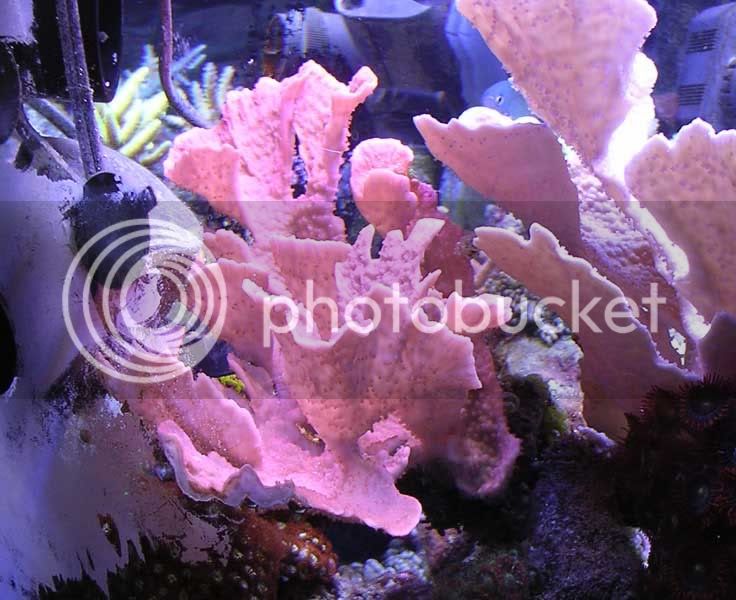 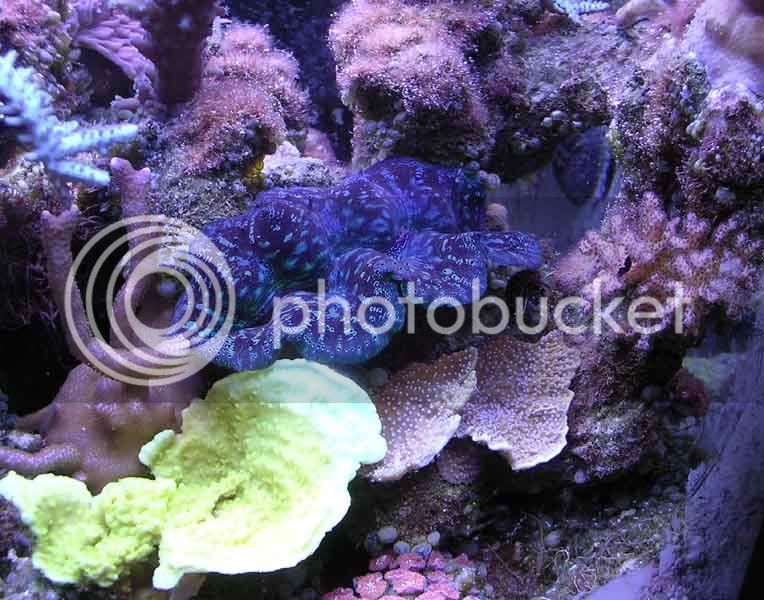 Here is the acro that has taken the bigest hit...the alk is steady (for now), and I think the recession has finally stoped.. 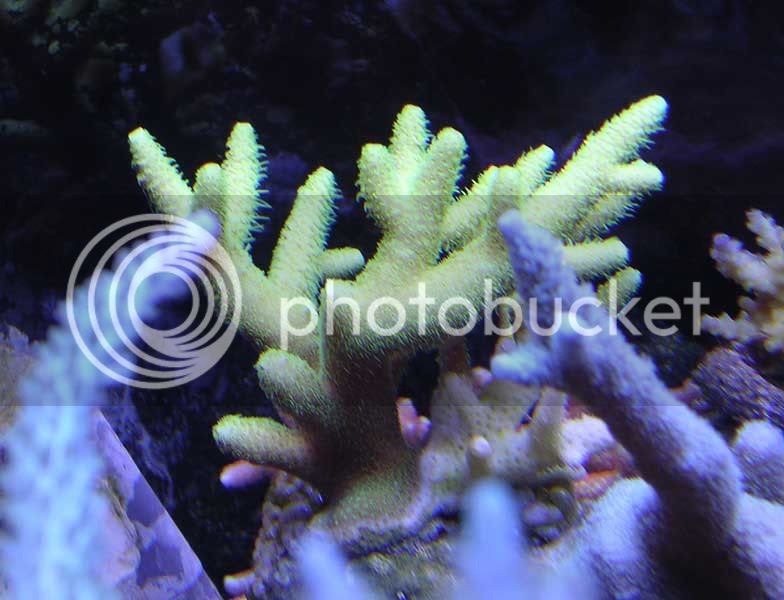 I also thought your tank was one of the most amazing tank. Too bad it was going down. I think it's time for you to upgrade to a 240G.

Premium Member
Sorry to hear about the tear down.

Same here, my Alk drop so fast that it's so hard to keep up while maintain the PH stable.

Premium Member
Re: Time to end it...

<a href=showthread.php?s=&postid=9828462#post9828462 target=_blank>Originally posted</a> by duec22
Well I'm at a point with my tank that I can no longer sustain it. I'm up to adding 3/4 a cup of sodium bicarb, and calcium chloride about every 5 days. It's becoming impossible to keep my alk. up and the pH stable, and as a result I've had a few times where the pH goes out of wack and my tank turns into a white cloud. And since I can't keep the alk. up my SPS have started to recede.
Click to expand...

Why don't you look at getting a small Ca reactor. This scenario is where Ca reactors work best.

david, how many gallons do you evaporate per day? have you considered kalk for topoff? also, that clam is probably sucking up a lot of calcium. but man, its a beauty!

Sorry to hear about the tank breakdown. Were you able to get that insignis to color up? I just added some T5 supplements and I'm getting some blue tips on mine. I'll might take your T5's, if you're parting them out. Good luck with the softy tank, let me know how those zoos are doing.
O

Why can't he just frag them all and sell /give away stuff? And keep the same tank. It would be easy again after taking all that business out. Just keep what you like?...
D

Minh, thanks for the complimets,,,hopefuly a bigger tank will be in my future, maybe six month, but I need to move to an apt. with floors that will suport it.

tacocat, I've seriouly thought about one, even was going to do the MARS DIY reactor, but had to work that day. Since then, I've done some reading, and would like to stick with 2-pt. I just need to get together with my brother-in-law and build a dosing pump system.

Tim, I evap. probably about a litter a day. I have thought about using Kalk at night, but I just don't want to try and figure out how much of each to maintain things. I was a little unsure if the lighting would be enough when I first got he clam, but I've had it for just over a year now, so I think it's good...I almost bought a second one the other week, but used my YR gift cert. for sand for the new nano and a frag of this really dark purple tenius that has a blue metalic shine to it...

Xia, I had it low in the tank, and it browed out a little bit, but was still heathly. I just raised it into the full light two days ago, and did notice that the tips do have some blue to them now. All the zoas are doing great...those orange ones are amazing, I don't think I've ever seen any zoa like them..

I'm not going to be getting rid of this tank, just tearing it apart and redoing everything. The newly refubished 29, now has a black backing and I rebuilt the CPR HOB fuge with new baffels/braces, will have pretty much just SPS and a whole lot less rock (mostly the thick tonga brach) for better flow. The 12 gal will get all the zoas and the vast majority of the LPS. I'm hopeing that by removing the LPS I can reduce the alk/cal cunsumption in the tank and provide more stable water for the SPS. I'll probalby be fragging down my two big caps some to also give me some more room and further reduce the alk/ca uptake.
D

<a href=showthread.php?s=&postid=9828941#post9828941 target=_blank>Originally posted</a> by OrangeKoi
Why can't he just frag them all and sell /give away stuff? And keep the same tank. It would be easy again after taking all that business out. Just keep what you like?...
Click to expand...

I've done that a couple of time, but I just can't resist collecing rare corals when I find one at a great price. Like when I was at John's once right affter he brought in a bunch of ponape birdsnest, I found a 2.5" multi-branched piece in the $55 section (it should sell for like $120). When I aked about it he honored the price even though I told him it was fine if he wanted more. The SPS I'm trying to grow out so that when I move and get a 150gal I've got a couple of nice size colonies to fill it in a little bit. I'm shooting for the new tank and apt. in about six months....

in any event, kudos to you for keeping with it and growing them guys out to a good size!
D

Here is a that new tenius I was telling Tim about...and for anyone with a sandbed and no room for new frags..if you look at what this frag is mounted to, it's an acrilic rod that I shoved into the sand, and sould be able to just peal the glue off the rod when it's time to mount. My friend Eric and I have always joked about going artdeco with a nano by taking the rods and putting acrilic balls at the end to grow zoas over...and then take a couple and suspend them by fishing line and mound monties to them.... 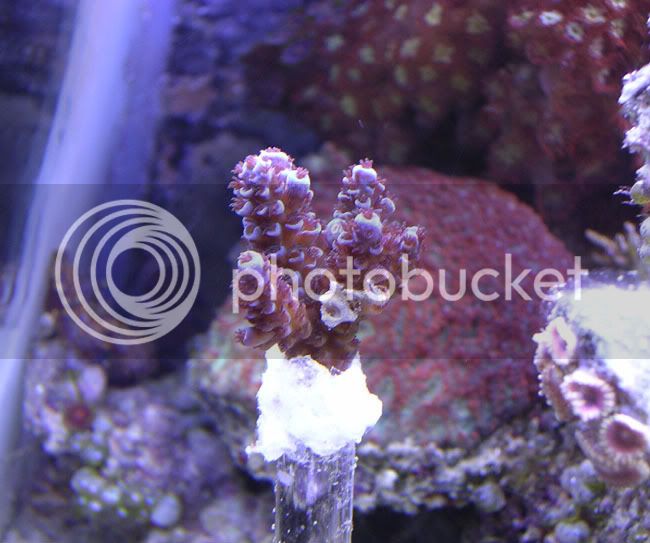 Sorry to hear you're getting frustrated with tank maintenance, Dave. However, I'm glad you're not getting out. Hate to lose another fellow collector

Sorry to hear your frustrations, if I was dumping 3/4 of a cup of buff a week on a 30g, id be pretty bitter too

I think kalk would alleviate alot of your troubles though. Im sure suggestions arent the best thing to hear in times like this. But 1/2-3/4 tble spoon would be the amount your looking for to drip your liter at night, this will sustain Ca levels and keep your alk up during the nightly drop off, the stuff literally saves my arse in this hobby and to me is a "miracle in a bottle" if there ever was one in this hobby IMO.

It is the only thing I add and do 1tbl sp per gallon per night, give or take a 1/5 of a gallon depending on evap.

The only hassle I came across was my own tight butt not buying a dripper, and just made one my self out of an old purified gallon jug some airline tubing and a venturi valve that comes with all generic pumps. Ghetto as can be, but has been working for me now for over a year and half I believe. Hang in there David, theres alot of us who enjoy the fruits of your labor of love

Hell bro, I'll even make you one as a gift if you promise to try kalk for at least 3 weeks and see how you like it

Premium Member
Alrright, I can't ignore this one because I tried........If your bored with it thats one thing, but DONT tear that down if you want to keep it. You have a great collection of well grown SPS.......we should all be so lucky to have your problems......

A reactor I think would be the wrong application for the size of tank you have.

I would buy a doser as Justin says and call it a day. It will solve all your problems!!

I have this one:
http://www.marinedepot.com/aquarium...aquatics_sentry_admiral_commander.asp?CartId=

Provided I don't get lazy and watch for alk creep, it is a stable and reliable means of dosing that will more than solve your problems.

If you want top-off or phyto dosing capability as well look into these, which I think I should have instead:
http://www.marinedepot.com/aquarium..._3000_sp3000_niveaumat_reef_doser.asp?CartId=

Regardless, your problems are easily solved so PLEASE, PLEASE do not tear that beautiful tank down because of that.

A pump with 3 small lines will be SO, SO very easy to hide and use you will be wondering how you got by at all without it....I know I do. (I buy the B-ionic gals plug em in and call it good, takes about 6-8 weeks to use them at current need)

Premium Member
Nevermind.......I misread your clarification........scared me.....thought you were breaking it down and getting rid of it.

Still, in the longrun if you want to keep it the way it is, it may work out the same costwise and timewise by adding a doser until you get the larger tank going.
D

I think I might be able to get a 12-chanel peristalic pump, that I can use different size tubing and varry the speed with. I just got to make sure work doesn't have a need for it anymore, and then go buy some pump clamps and tubing for it.

Well I got the new rock all put together with acrilic rods, but I didn't make the witch yet. The recession on some of the acros hasn't completly stoped from the low alk., but t hings have been looking better over the past week, and just did a big water change, and while I had the top up I took a couple top down pics...I forgot how good things look from this angle...

first here is the new rock, waiting to go into the new tank, and with some of the zoas already transfered over... 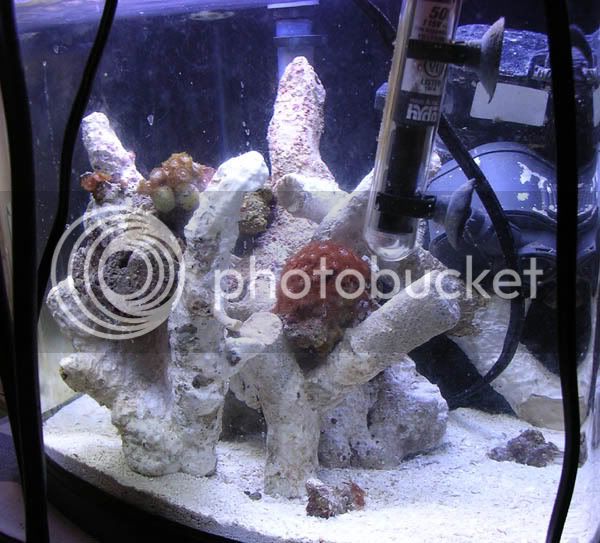 here are the caps, and in the lowere left, what is left of my Steve Elias stag.. 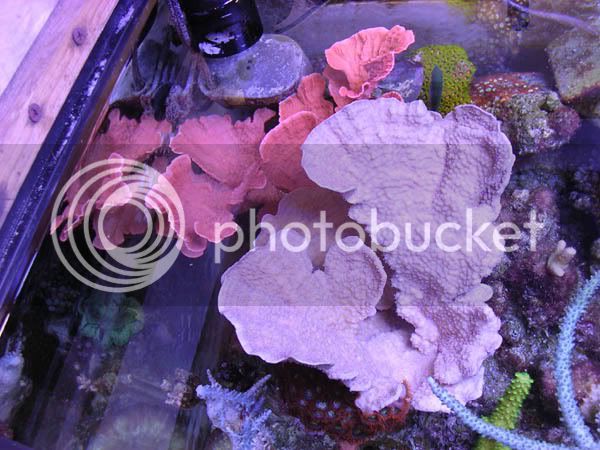 Pam's yellow milli or prostrata (can't remeber which), and a digi I haven't seen for a while...there is also what is left of the SES's base 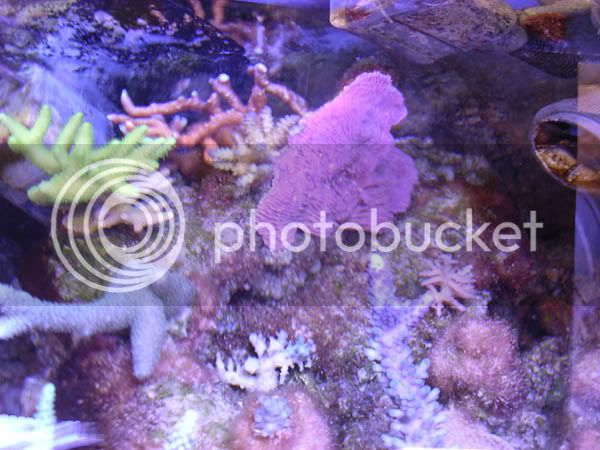 and a couple others 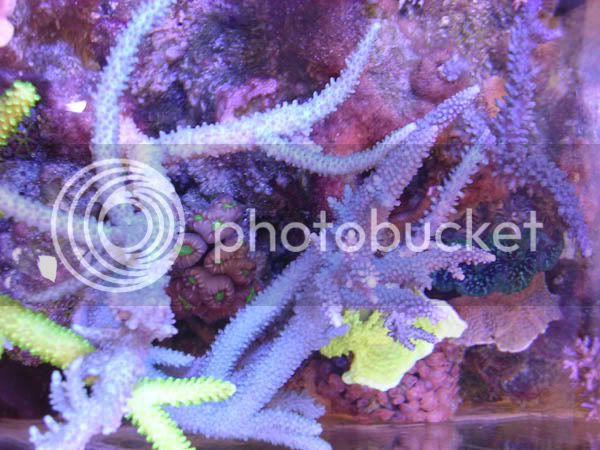 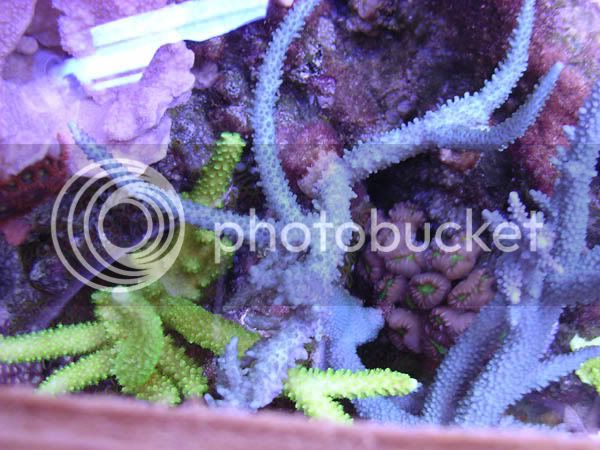 <a href=showthread.php?s=&postid=9833004#post9833004 target=_blank>Originally posted</a> by dots
A reactor I think would be the wrong application for the size of tank you have.
Click to expand...

In addition, a reactor would gradually add alkalinity and calcium through out the day versus adding it in larger doses, which can be more problematic in smaller aquariums.

Duec may own a 29g, but it's stocked like a 75g.
You must log in or register to reply here.